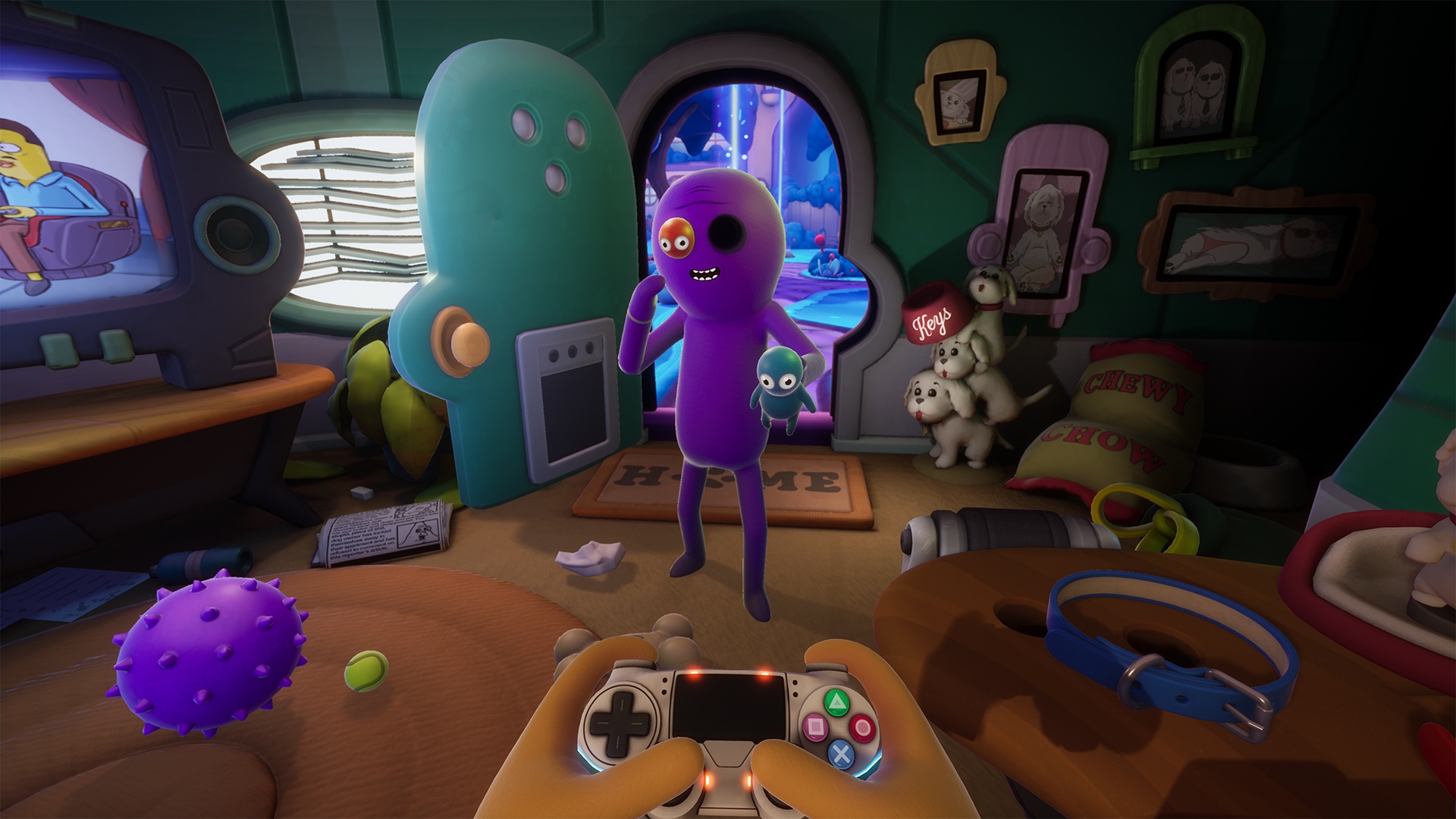 If you like Justin Roiland’s twisted, obscene sense of humor and his brainchild, Rick and Morty, then this review will be a bit redundant for you. You should already have it, and you should already be laughing. For anyone unfamiliar, you can expect Trover Saves the Universe to push the limits of profanity and humor all while providing you with some simple but excellent third-person gameplay. This game isn’t for the faint of heart, but if you’re looking to spend a few hours laughing until it hurts, Trover’s got you covered.

The setup is as wacky as one would expect from the mind of Justin Roiland, casting players as a Chairopian, an essentially human race of people who exist exclusively in teleporting chairs and use game controllers to control things as needed. When your two dogs are stolen by an evil being named Glorkon to be used as makeshift eyeballs for his empty eye sockets (you read it right), you’re found by a purple alien named Trover who wields as lightsaber-esque sword and informs you that you have to control him to go, you know, save the universe.

You control Trover with the left stick and face buttons in a fairly typical third-person action-platformer style, but moving yourself around requires you to walk Trover to a new teleportation spot. This allows you to explore its large, detailed levels unencumbered as Trover while keeping your Chairopian character locked in specific positions to avoid some common camera issues that can crop up in VR games. Using the VR headset adds an obvious level of immersion in both visuals and gameplay, such as using your head to nod or shake your head to answer questions, but it’s otherwise an identical experience from a gameplay perspective if you choose to opt for a non-VR experience. 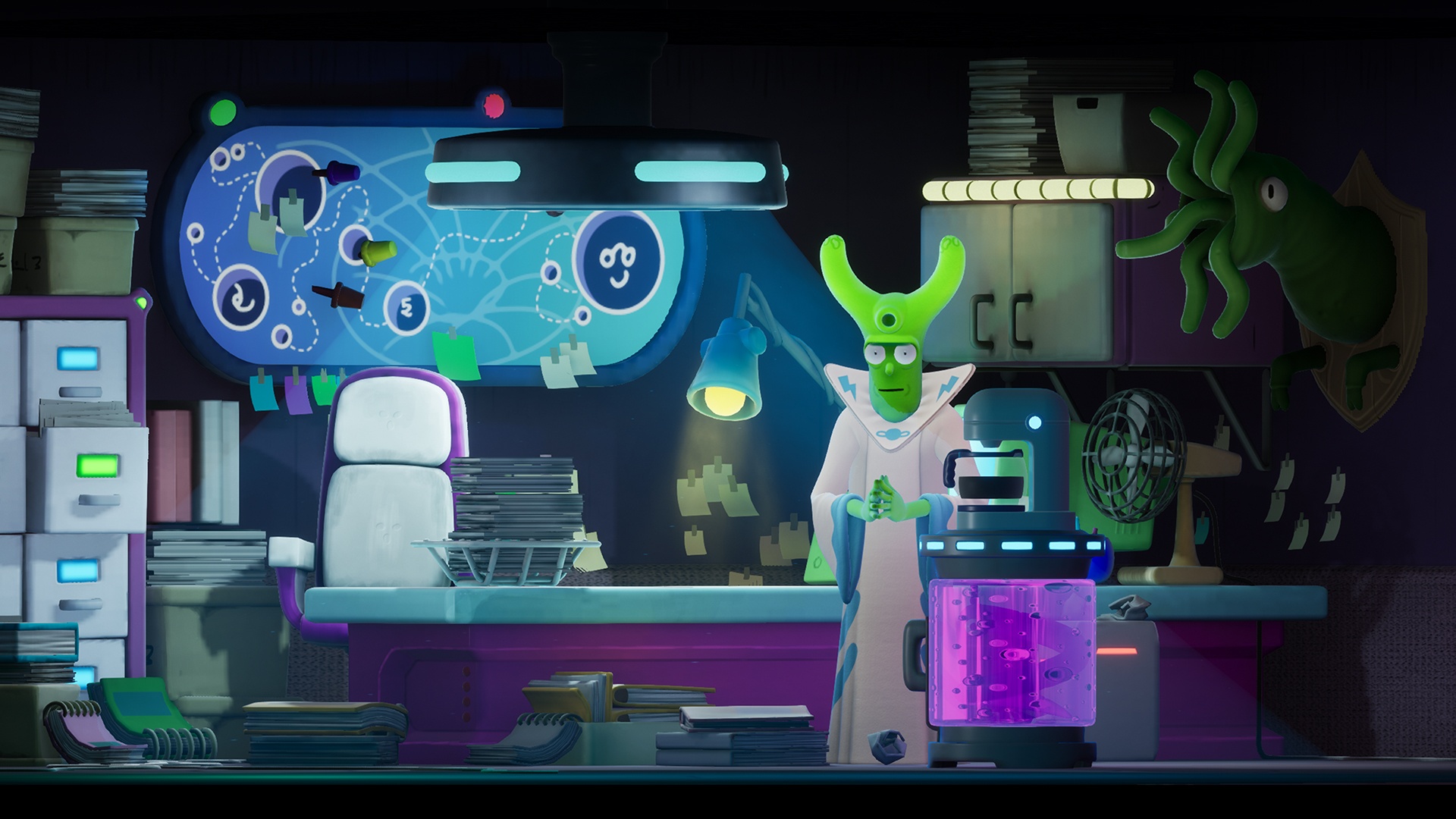 Your typical sword slashes are used for dispatching a consistently growing arsenal of Glorkon clones, each with expanding kill requirements. One requires you to break off three pieces of its armor by throwing objects at it as your Chairopian character before Trover can go in for a sword kill. Another has a shield and can only be attacked during the brief window after he takes a swing at you. Most of the game’s enemies can be taken out with some simple mashing of the square button, however, and combat never feels challenging in the slightest, serving more as an obligatory feature than a key component to the experience.

The remaining gameplay consists of some light puzzle solving and rudimentary platforming, all of which is fun and engaging enough to never leave you with any forced downtime. There are some collectibles scattered throughout the levels that also upgrade Trover’s health, and Trover promises that finding all of them in the game will net you an amazing gift. The payoff is as ludicrous and clever as I expected it to be, and while collecting them is both fun and useful in-game, it’s worth finding them for the joke alone.

When Trover isn’t exploring levels or fighting baddies, you’ll be listening to near endless lines of dialogue from its zany NPCs and enemies scattered throughout the levels. Like his projects before this, Justin Roiland delivers his voice lines with seemingly deliberate improvisation. It often sounds as though he sat in a room with a vague outline of what he wanted to convey and then ad-libbed a twenty minute conversation between characters, and it’s this stream-of-consciousness style that makes Trover Saves the Universe so ridiculously gut-busting. The clumsy stuttering and insecurely-spoken dialogue makes for refreshingly hilarious moments that beg for the player to stop and sit the controller down for a while, because just when you think two enemy scouts have finished their talk about something utterly vile, they’ll change the subject for another five minutes worth of outrageously funny and obscene chatting. 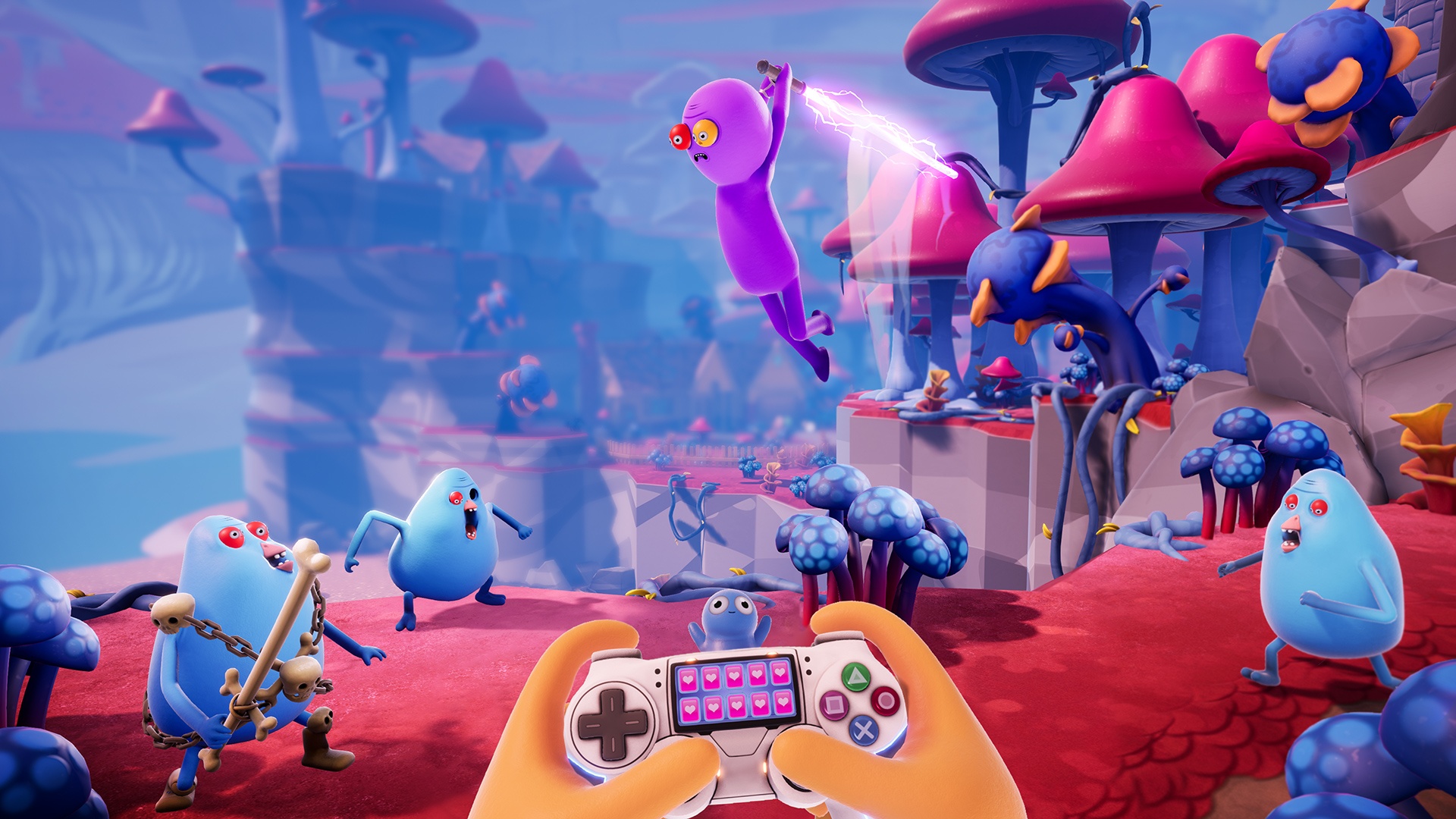 But it’s important to note that Trover Saves the Universe is a game dying to offend you in all the best ways. Alongside hundreds of casually-used F-bombs and other swearing, you can expect to see or hear subject matter dealing with things like suicide, AIDs, sexuality, racial satire, and bodily functions galore. If you’re like me, all of this will culminate in hands down the funniest interactive experience ever made, but if you’re not a fan of dark and lewd humor, don’t say I didn’t warn you. That said, if you want a slightly toned-down version, there is a censored mode that bleeps some swear words, but it seems almost like a joke option itself considering just how foul the game is with or without it.

Trover Saves the Universe is the funniest game I’ve ever played and somehow manages to marry its humor and gameplay brilliantly. Simple combat and platforming are complimented beautifully by an amusing story and off-color jokes that never seem willing to stop testing the limits of offensiveness. If you like to laugh, slice up a few baddies, and explore crazy and weird locales, you’ve got the perfect game waiting for you. Just be prepared to clean your VR lenses when you smudge them up with tears of laughter.

If you like to laugh, slice up a few baddies, and explore crazy and weird locales, you’ve got the perfect game waiting for you.