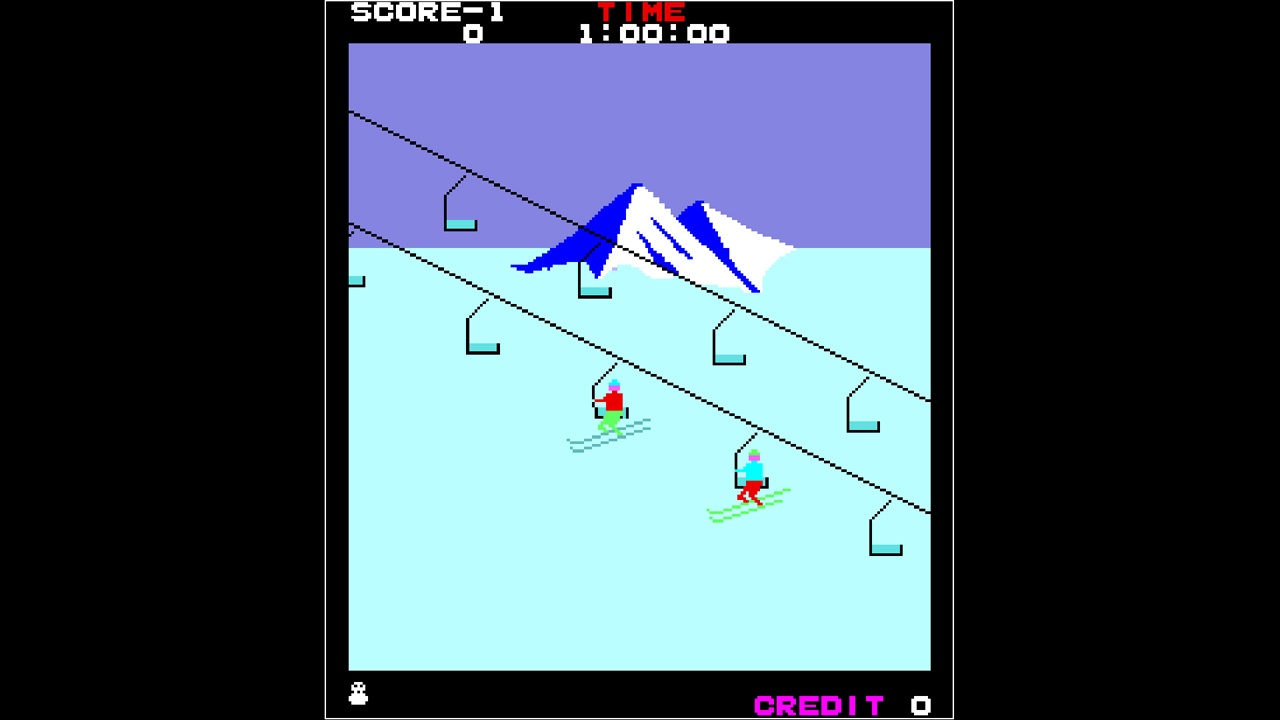 It’s crazy to think that we’re hitting a generational gap in video games that’s akin to talking to your grandmother about her childhood. When I was a kid, hearing about rolling a hoop with a stick or kicking a can seemed so surreal. There didn’t appear to be a purpose or even really anything fun about it, but I suppose anything that wasn’t working in a factory when you were eight seemed like a great time. Now, as VR becomes mainstay, 4K is commonplace and installs crawl towards triple GB installations, I can start to feel the divide in a more personal way. So it’s pretty great for Hamster to still lead the initiative with the Arcade Archives to capture more of what used to be considered video game quality entertainment. Not every Archive is going to be a clear stepping stone to the future of fighting, shmups or Nintendo icons: sometimes, it’s a testament to just how easily we were all amused back in the day.

Alpine Ski is an arcade game from 1981 where about half the people who played it wouldn’t know there was an entire second half to the game. Made by the famous Taito people, the initial objective was simple: ski and don’t die. You have only a single button to worry about, which made you go faster when you held it down and slowed when you released it. Your joystick was to navigate you through the mountainous arena, which was wrought with rocks, trees, patches of ice and other skiers on both traditional rails and snowmobiles. There are patches of floating points for you to grab if you wish to risk your neck for a higher score. If you were decent enough to get through the initial “downhill” free ski, you could move onto the Slalom phase, where you dodged between flags plus the original obstacles to get a high score. Then, if you could finish THAT, you were awarded a chance at the ski jump, where you could attain massive points. After that, you…just start over again. You shoot till you miss, essentially, and the high score could potentially be massive if you were attuned. 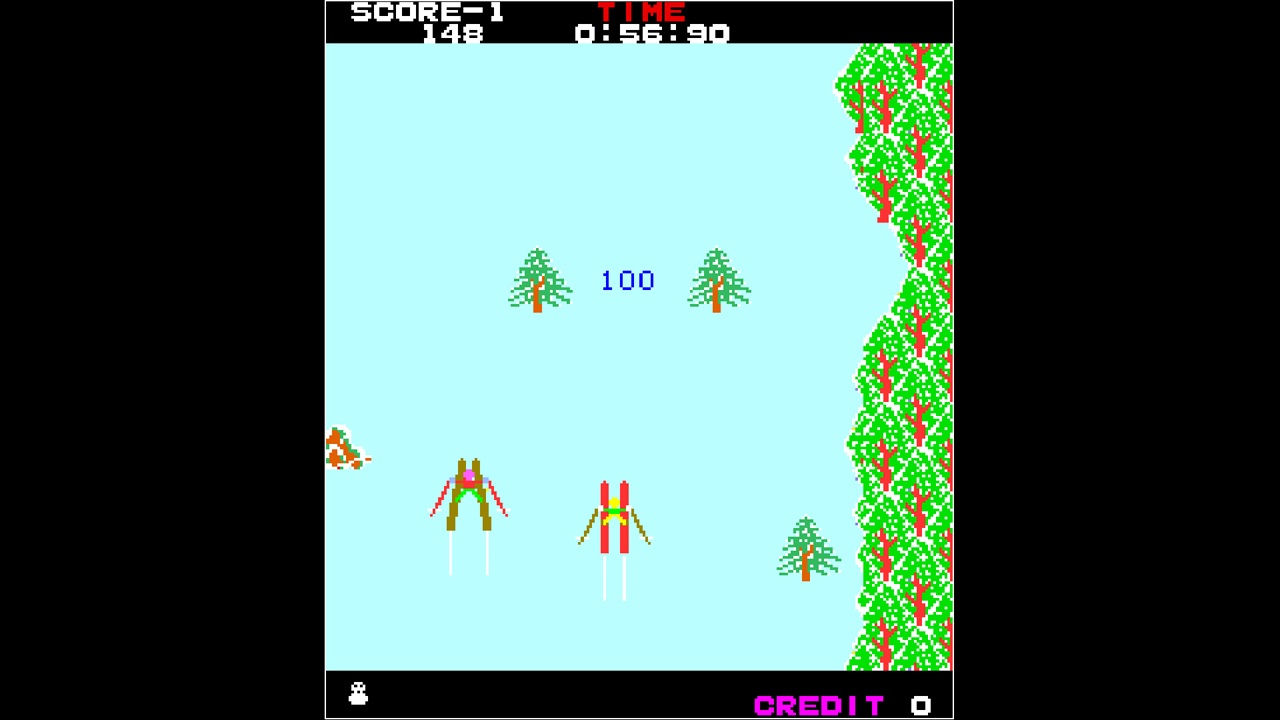 Compared to a lot of titles nowadays, Alpine Ski is an awkward, clunky mess. You’re skiing downhill, but the game scrolls upwards, vertically.  You have to dodge around all these obstacles, but the game is designed so that the immobile items (rocks and such) are static, but the other skiers could appear almost anywhere, and hitting anything decreases your time by ten seconds. While this doesn’t seem like much, you only have two minutes for the whole game. There aren’t any “lives” to be lost, but when that two minutes is up, so is your quarter. Finishing a section of the game awards you an additional ten seconds, but that can disappear in the blink of an eye if you get greedy and try to hit the ice and skid between two trees just for the ultra-bonus of 1500. Moreover, when you get hit, you don’t restart from where you took the damage: you respawn at an arbitrary “restore” point that the game has plotted out somewhere on the course, so your blunder could potentially cost you many seconds of wasted time if you weren’t careful.

Success is measured purely in your reaction times. For the initial downhill ski, it’s all about surviving and just making it to the second part. I learned the hard way that a lot of the points that you could potentially get are just red herrings meant to trip you up and get you killed. You need to play from the back of the screen and pray that you can avoid things as fast as you can without going as fast as you can. Making it to the Salom, you change up your play style entirely, needing to become more daring, risky and twitchy, staying within the flags and following as best as you can, lest you incur the game’s wrath. I was only able to get to the ski jump once out of every eight times or so, and it was such a relief, but strangely anticlimactic. After the insane precision of the precious modes, to simply launch off the ramp and “try not to land on trees” was an almost underhand pitch in comparison. The fact that I would have given up a quarter for this seemed insane, even with the enticement to put up my initials and laud it over my friends. 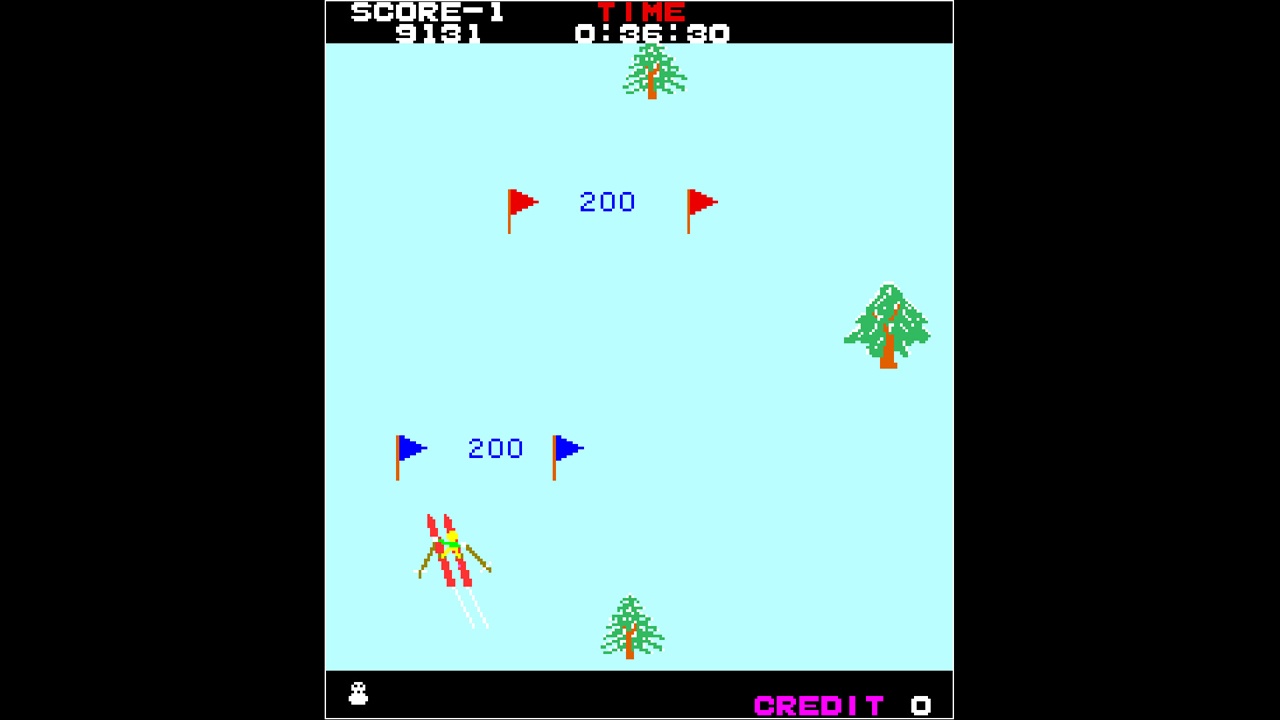 Then again, Alpine Ski also helps to encapsulate what was great about the turning tide of video games of the early 1980s. This is a prime example of something that would have been celebrated on the 2600, but was becoming boring even by this decade’s standards. The graphics might seem subpar compared to what you expect nowadays, but compare Alpine Ski to other titles of the day (the original Donkey Kong, the original Galaga, the first Ultima) and you see how colorful and robust it was. The soundtrack was repetitive, sure, but the objective was to lock players into the game and get them focused on keeping up with how the landscape was generated and to truly see what they could do with only two minutes of time: you weren’t super interested in sweeping, orchestral pieces to motivate your skiing. Additionally, there were three whole different modes of gameplay, which almost felt like a startling surprise. While the ski jump wouldn’t give you the opportunity for performing tricks like later ski games would, it still measured precision and asked the player to operate the RADAR controls successfully to avoid eating snow, as you didn’t get a second chance with the jump: flub your takeoff, you’re done.

I mean, let’s face it, there’s not a ton to this game, and it feels like Hamster took a flyer with this one. It’s a good port, and the fact that it’s another game to add to the vertical Switch collection is always decent, but this one is much more a museum piece than anything else. It must be nearly impossible to find this machine anywhere nowadays, and there have been worse games made for much higher price tags, so you can’t write it off completely. Yet, here we stand, and I can only advise this be picked up for people with deep, deep nostalgic ties OR a determination to collect every Arcade Archive.

Alpine Ski sticks to its classic roots, delivering an arcade experience that’s true to form but straight down the middle of the lane in terms of gameplay.