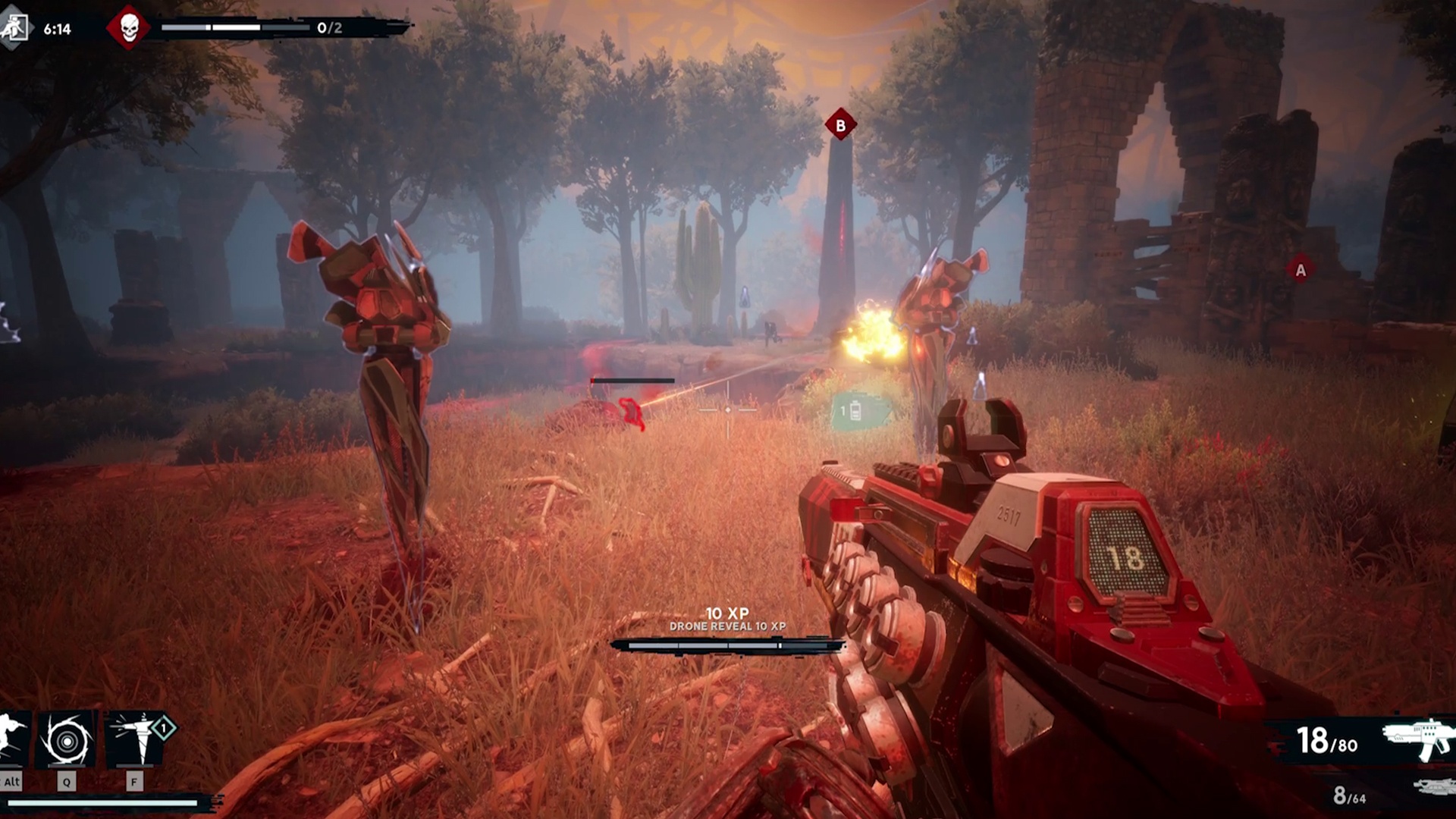 If up until a few days ago you had never heard of Deathgarden, I wouldn’t have blamed you. The game initially showed up about a year ago, but it didn’t really fare well when it launched on Steam’s Early Access. This wouldn’t really be much to write home about, but it just so happens that the developers of Deathgarden are Behaviour Interactive, the same folks that made (and continue updating) the popular asymmetric multiplayer game, Dead by Daylight. Both games share numerous similarities, and I guess that was one of the factors contributing to the not so popular reception last year. Nonetheless, after a year of hard work, the team over at Behaviour Interactive has redesigned the game and relaunched on Early Access, and this time it seems that they’ve done a good job.

Deathgarden: BLOODHARVEST takes place in a dystopian future, in the wake of a war between the world’s superpowers, where pretty much everything is left in ruins. As a surprise to no one, the victors built themselves enclaves, condemning everyone else to live in the surrounding slums. Now, the only way for people to prove that they’re worthy of entering the enclaves is by completing the Blood Harvest, a trial inside the Deathgarden, where they must harvest blood (literally) while being hunted by the enclave guardian.

Deathgarden: BLOODHARVEST is a 1vs5 asymmetrical online multiplayer action game. There are two ways to play Deathgarden, you can play as a scavenger, or as the hunter. These two play very differently from one another, but you can extensively customize your character in each team, in order to better fit your playstyle. As the hunter, your job is simply to kill all scavengers, or as many as you can, while resorting to a series of gadgets and abilities that make up for your numerical inferiority. On the other hand, scavengers have to harvest 125 blood from altars that are scattered across the maps, and then deliver them to one of three monoliths, which then triggers the final phase of the map in which exits suddenly appear and scavengers are revealed to the hunter thanks to a massive scan that sweeps the entire map. 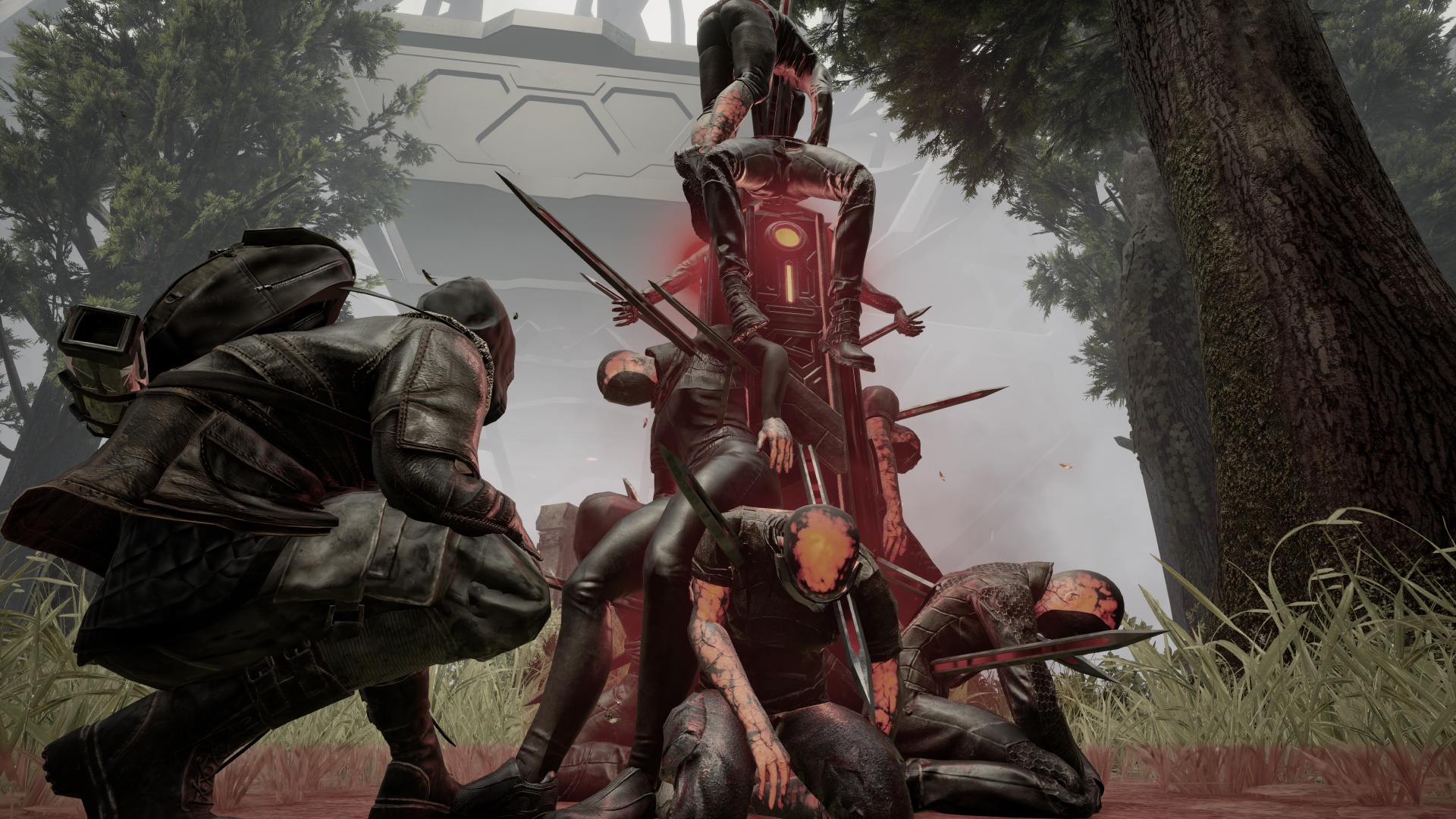 I believe that the game’s concept is a pretty simple one, and also one which new players can easily understand and then quickly get into mastering the actual gameplay mechanics. When facing an experienced hunter, scavengers must resort to stealth, quick movement around the map, and teamwork, in order to avoid getting spotted and downed. As a scavenger, if the hunter manages to put you down, you’ll only survive the encounter if somebody on your team has a healing arrow, or if they distract the hunter while you crawl to a health node or while you get revived. If you get caught on your own, you’re pretty much dead, as the hunter can quickly trigger the execution move which removes you from the match. Personally, I think that the execution mechanic could use some tweaking, as it’s quite frustrating to get downed, because once the hunter starts the execution animation, there’s no way you’ll live. Still, I do think that the scavenger is the one to blame in these cases, as scavengers are supposed to work together, not take casual walks around the map by themselves.

Meanwhile, playing as the hunter requires you to be aggressive, know the maps and where things are located, and use the high ground to your advantage. Drones are the hunter’s best friends. By picking up power cores (which are also used by scavengers to trigger their abilities), you can then power up drones that will scan a wide area around them. If a hunter is caught inside the drone’s sensor, they are marked and revealed to the hunter. However, scavengers can shoot down drones in order to make room to roam around the map, but, after a short time, drones will repair themselves and go back to perform their duty.

In order to keep players engaged, Deathgarden features a progression system that is fairly straightforward, and very reminiscent of what you find in Dead by Daylight. By performing actions like harvesting blood, marking resource crates, and killing scavengers, you’ll be rewarded with three types of currencies, silver, blood, and gold, which are used to unlock new classes, as well as upgrade and purchase abilities and perks. Each class comes with their own different set of abilities and perks from which you can pick from, and, as you play with them enabled, you’ll unlock upgrades for them.

Things like healing and smoke bolts, cloaking, and deploying decoy clones of yourself are a few of the main abilities that are available in the scavenger’s arsenal. Each of these have very specific use scenarios, but, as far as perks go, they can have just as much of a strong impact on the outcome of a match as your main ability, as they allow you gain extra speed during tricky situations or get extra ammunition from crates. Likewise, hunters also have a varied loadout to choose from. Each of the currently available hunters (3) are not only unique in terms of the abilities that they offer, which range from deployable anti-personnel mines, sentry turrets, and cloaking, but they also come with different weapons and perks. 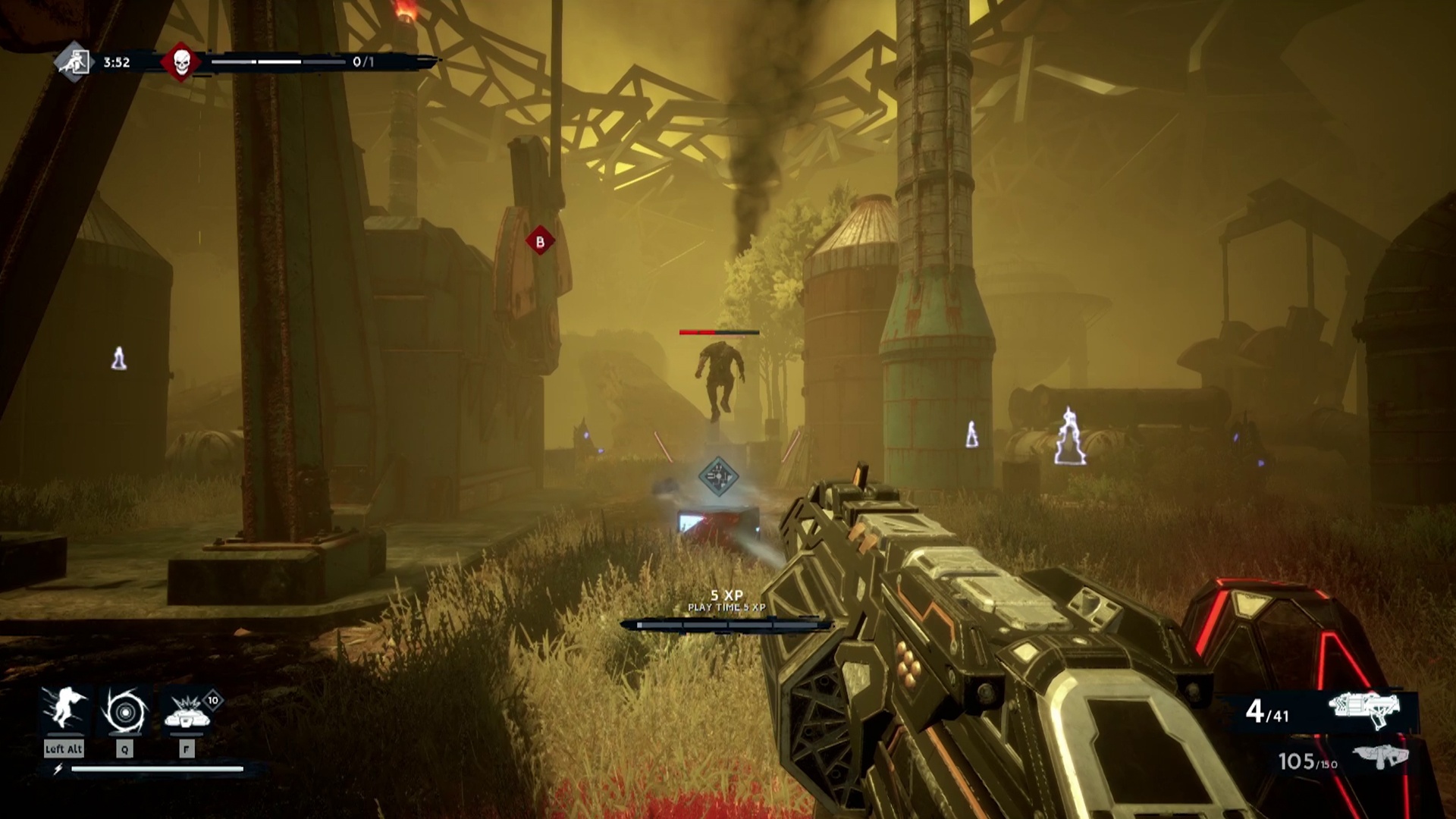 On another subject, while at the moment the game seems to have a healthy player base, which is mostly thanks to the huge promotion that the studio did during the relaunch of the game, queue times vary greatly. Whenever I want to play as a scavenger, wait times usually go up to about two minutes, while if I want to play as a hunter I don’t even have to wait ten seconds most of the times. The point is, I’m slightly worried that if people slowly stop playing the game, either because of slow updates or some other reason, scavenger queues will become a lot longer, since most people seem to prefer playing as scavengers over the lonely hunter. With that said, a problem that should really be addressed is the fact that there is no penalty for leaving. If a hunter sees that he’s having a rough time and the match is coming to a close with the entire scavenger team still alive, he can just leave and queue again with no consequences. The same thing can be said for a scavenger that gets downed and has no chance of surviving.

Even though I would’ve liked to see more maps in the game right now, I can safely say that Deathgarden is a lot of fun as it currently stands. Playing both as a scavenger or as the hunter is fun, and each of them provides a significantly different challenge. On top of that, the grind to complete challenges to unlock perk and ability upgrades is also captivating and provides some sort of side goal. It might not seem like it, but the fact that scavengers play from a third person point of view which allows them to be more aware of their surroundings, while the hunter plays in a claustrophobic first-person view, almost makes it feel like these are two different games.

At the end of the day, Deathgarden has come a long way and it’s now more worth than ever. If you can still take advantage of the relaunch promotion I’d say that this is a no brainer. If, however, you’re still hesitant, I’d suggest you wait a while longer to see how the player base fares the test of time.