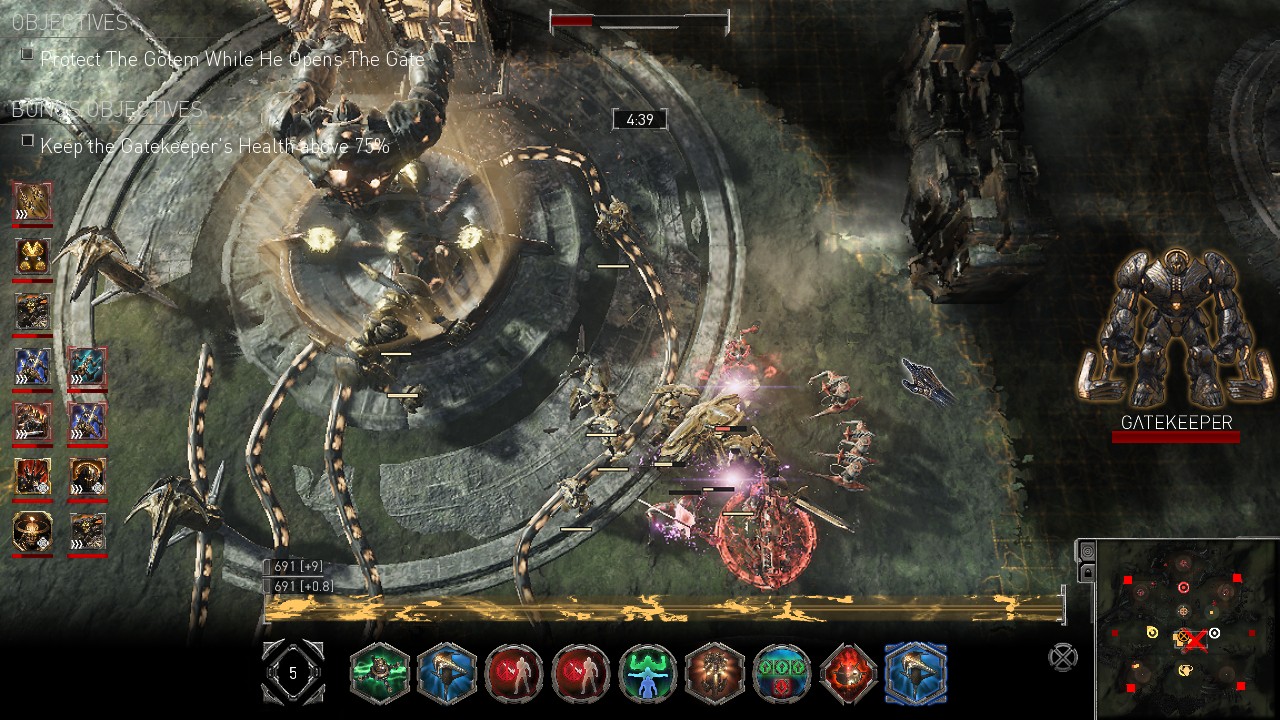 Strategy games are two-to-a-dozen these days on the Nintendo Switch, which in itself isn’t a bad thing. In fact, I think its rather good as I’ve always been a sucker for strategic gameplay. However, you can also say that this statement is only really true when it comes to turn-based strategy, as the real-time varieties haven’t really had much of a look-in, until now that is, as Golem Gates, developed by Laser Guided Games and published through Digerati, creates a unique twist on its genre with a deck-building mechanic as it deals a release on Ninty’s machine.

You play the role of the Harbinger, an all-powerful being, who has the ability to summon a variety of unit types in which to build an army. Using the ability of a substance known as Ash, you produce a series of nanites to form a variety of combat units that vary in their size, strength and abilities. Once your army have been amassed, you then set them forth to regain control of a series of Nano Generators and, ultimately, shut down the production of the Golem Gates; a series of portals that are used to summon the evil forces that have wreaked havoc across the war-torn landscapes of a post-apocalyptic world.

The game starts with an introductory prologue that serves to acquaint you with the mechanics and objectives you need to fulfil your quest. Using a technique that harvests energy to produce a power-bar, the units that you can summon are determined by the level of power you have available and the order of card-like icons that are dealt in a random-fashion, although you can pick and choose from the limited numbers that are available at any time that you wish to summon. Once your initial units have been formed, you can select them individually or as a whole and command them to march along a chosen trajectory. Your main objectives here involves taking over a series of generators, which in turn produces more energy, which allows you to summon more units, before amassing an army to destroy the Golem Gates, thus putting an end to the evil invasion of this land. 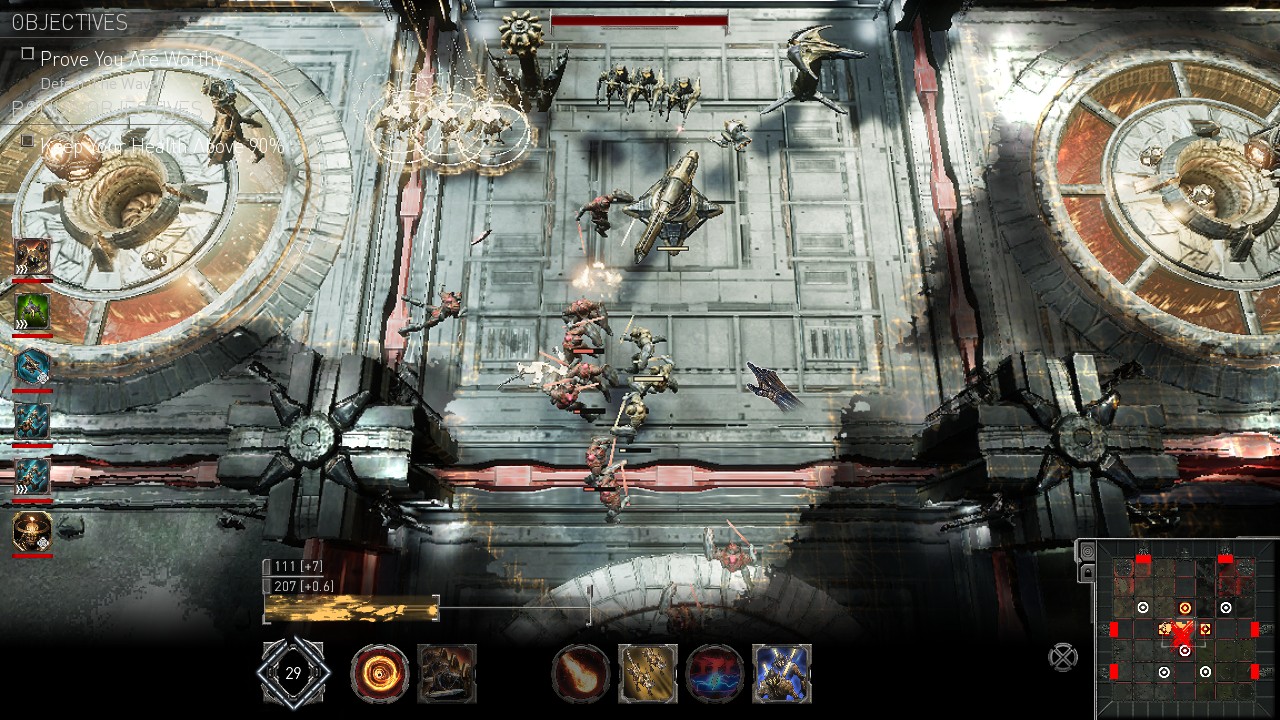 It’s a very simple premise and one that provides a unique take on the RTS genre. There’s no base-building here or harvesting of resources. Your main focus lies in the acquisition of energy-inducing generators and destroying the gates; although it is vitally as important that you build a defence for yourself, the Harbinger, for should the enemy forces find a way to you and end your reign, then it’s goodnight. For as long as you remain alive though and harvest the energy needed for summoning, you can continue to build and amass an army to conquer the level. It produces a fluidity to the gameplay and a faster level of strategy than compared to your usual RTS game, but also contains a level of depth with the ability to build your own deck of unit-defining cards from which to choose from.

This element of the gameplay comes in the form of icons, or glyphs as they’re known in-game, to build a deck of around thirty units and abilities. The game works by randomly placing a limited number of these glyphs on-screen and from these selections, plus depending on what energy stores you have, you can summon whatever units you can. The amount of energy available to you, dependent on what generators you may possess, automatically fills over time and any used glyphs are replaced from others within your deck. This random element of card, or glyph, placement produces a more deeper level of strategy, as you never know what options may be available to you at any given time; especially when some glyphs contain buffs, traps or other functions. Should you find yourself with no units to summon, then your strategic level of thinking requires just a little more to hold off any invading forces.

Although this presents a strategic layer to the gameplay, it also produces a random element to the game that can feel a bit unfair. You may find some levels produce an order of glyphs that gives you a distinct disadvantage on the battlefield, meaning the level is finished quicker that you can say game over. However, a replay of the same level can produce a different order of glyphs that sees you dominate the field with ease. This high degree of luck can dilute the experience somewhat, as no matter what your strategic level, the way that the glyphs deal against you cannot be overcome. However, it can also swing the other way, as at times, you can amass such a huge army, that each unit becomes amalgamated in a mesh of small sprites that can be hard to distinguish or select. Certain glyphs too can add to this, such as a fireball spell that can quickly annihilate your forces just as fast as the enemy, mainly due to the overcrowding bunching of your forces and your lack of any decisive control; creating some unfortunate accidents that can undo all of your hard work in an instant. 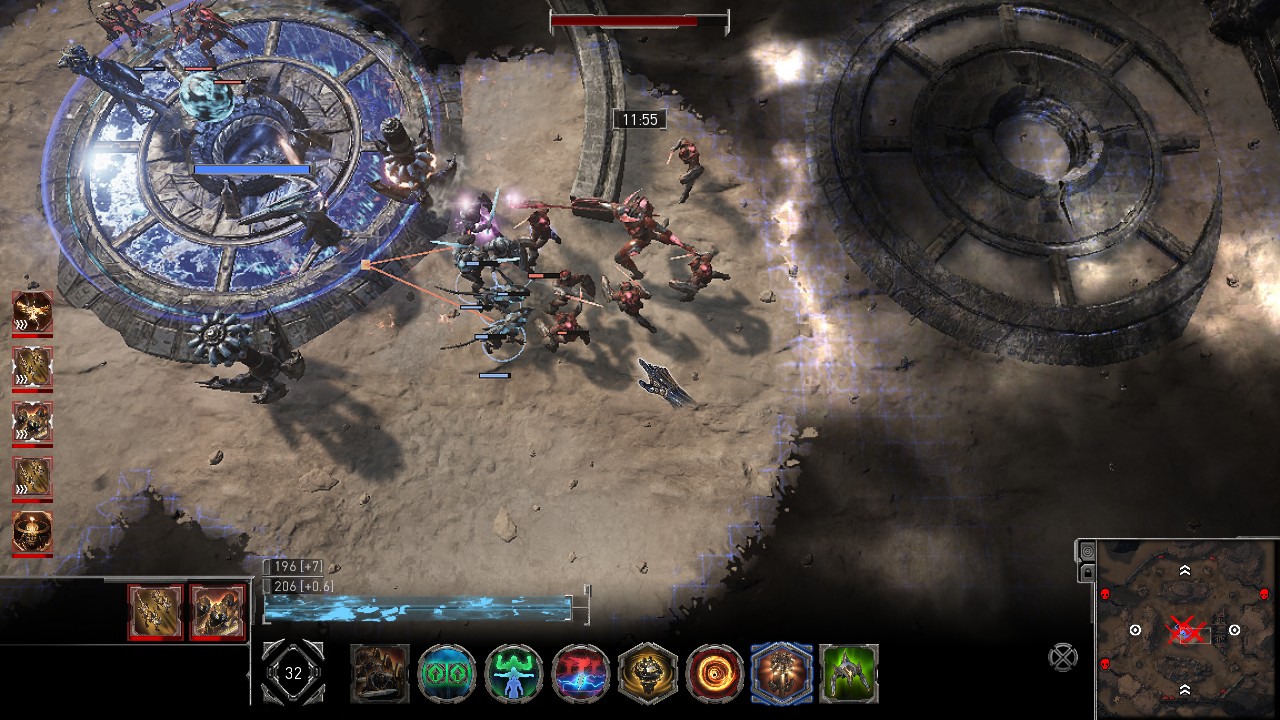 The presentation of the game though, is simply sublime with some sumptuous graphics and a soaring soundtrack that captures the mood of the game beautifully. It’s very much a game that looks and feels comfortable in its surroundings, producing a stellar performance on the Nintendo Switch. The campaign missions and objectives contain a nice variety that is pushed along with a back story to propel its momentum; although you can easily be forgiven for wondering what the hell is going on for the first few levels, as the story doesn’t really kick in until the second level and beyond, but its also here where the game ramps a level too.

There’s a nice degree of content here too, from the obligatory and expansive campaign mode, to a series of trials and survival modes which changes certain rulings or aspects of the game, such as banned glyphs or overpowered abilities. To try and extend its long-term appeal, you can also play a series of online matches that cater for 1v1, 2v2 or 4 player skirmishes, although sadly, I was unable to find one active lobby; something which plagues the majority of independent Switch games at present, which is a real shame. For the most part though, the game runs pretty well in whatever mode you play, although particularly during some of the later mission structures, the frame-rates became decidedly choppy when the action began to hot up, but it was never anything game breaking.

Overall, Golem Gates presents a nicely executed RTS that holds a good level of fun that can be had from the title. Its presentations are simply stellar, the gameplay is satisfying and there’s enough content to keep you going over the long-term. Its unique take on the strategy genre, with a deck-building mechanic, as well as its element of luck, all add to produce an interesting premise that simply keeps you playing. Despite everything that it has going for it, the game does contain a few nuances that can annoy or make you question its executions, but in large, you soon forget them once the screen becomes emblazoned with the words ‘victorious’. If you’re a fan of strategic or tactical gameplay and are looking for a game that you can seriously sink your teeth into, then this is a title that will surely provide you with what you’re looking for and keep you entertained over the long-term.

Golem Gates provides an interesting and engaging take on the RTS genre.