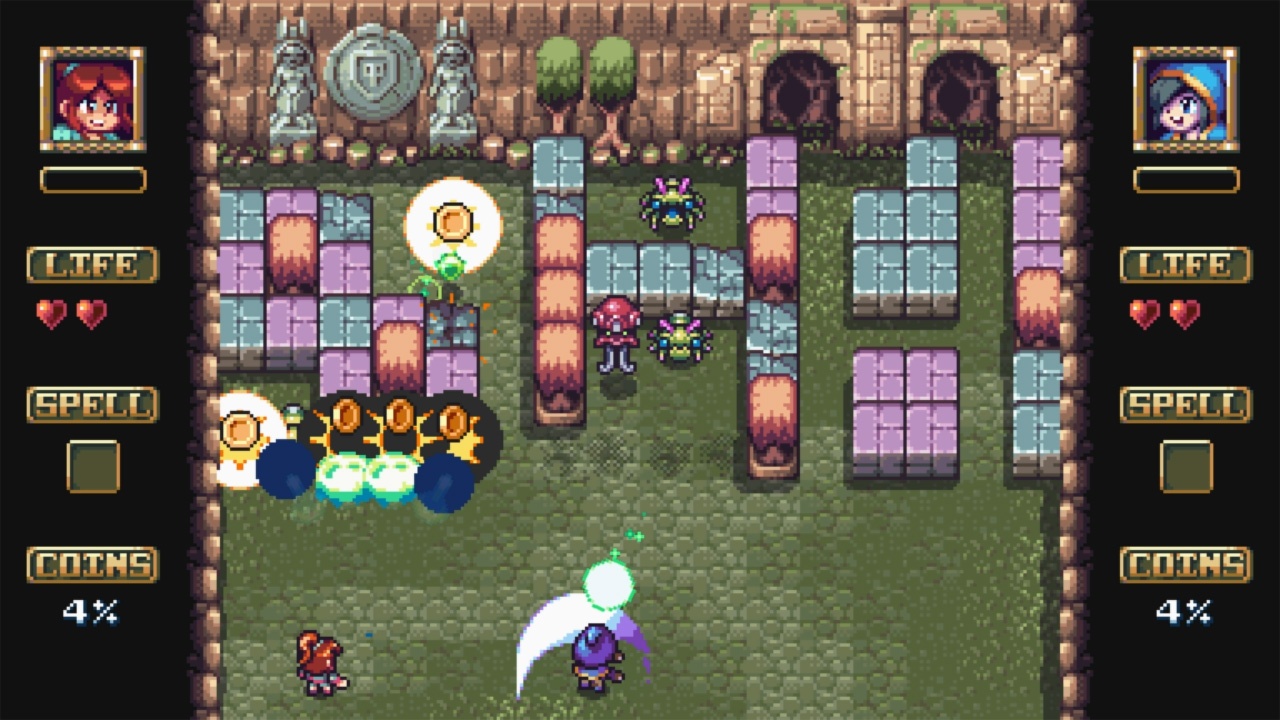 Breakout was a great game that led to a fantastic bevy of time wasting experiences. Though many don’t think about it, Breakout is a lot like the first Street Fighter: no one plays it, no one fondly enjoys it, yet the creation of that genre and title led to such better ones in the future. Arkanoid is the one I always think of: it had the simple concept of bouncing the ball to break bricks, but it introduced all these wild panel changes, ball power ups and various effects to make the game exciting and still solid even by today’s standards. DYA Games probably had a bit of a soft spot for the idea of “exceed and innovate” when they made their Breakout-style fantasy title, Strikey Sisters. The question, though, is whether all the bells and whistles that end up fashioned to the title make it more exciting or just louder.

Strikey Sisters is the tale of Marie and Elene, two sisters who are just trying to live their best lives together with their pet, Sachiro, in a shack somewhere in the countryside. For reasons that probably have to do with “being evil,” Sachiro has been kidnapped by Lord Vanik, and now we need to get him back. Unfortunately for the sisters, Lord Vanik has decided to throw every monster and minion in the book at them to keep the distance from their little Sachiro far and dismal. Fortunately, Marie and Elene just happen to be the best warrior wizard sister pair this side of the globe, and they will slash, smash and strike everything in their way to reunite with their beloved Sachiro. Lord Vanik has probably made a big mistake. Probably.

As a fantasy based brick breaker, Strikey Sisters is a series of levels connected by a grid map that allows you to re-play different locales over and over again as you make your way towards Sachiro, though the path isn’t always clear. You have four different paths to pursuit, each eventually ending with a boss or two to give you clearer ideas of what’s befallen your pet and where Vanik’s hiding her. Using your trusty weapon, the levels are clear only when you’ve broken all the bricks, which takes a while since each block usually needs two or three hits to smash. Additionally, enemies will continually spawn until all the bricks are gone, and each enemy brings a bit of annoyance to the table. There are enemies who rush you, those who shoot energy beams at you, ones who can block your ball without taking damage and ones that can make the whole screen shake and ruin the course of your hit. Boss levels only ask that you deal with the boss, not the bricks, and the bosses hardly make it easy: each has their own sorts of attacks, plus a fair amount of HP, and they usually take a bit of time to conquer. 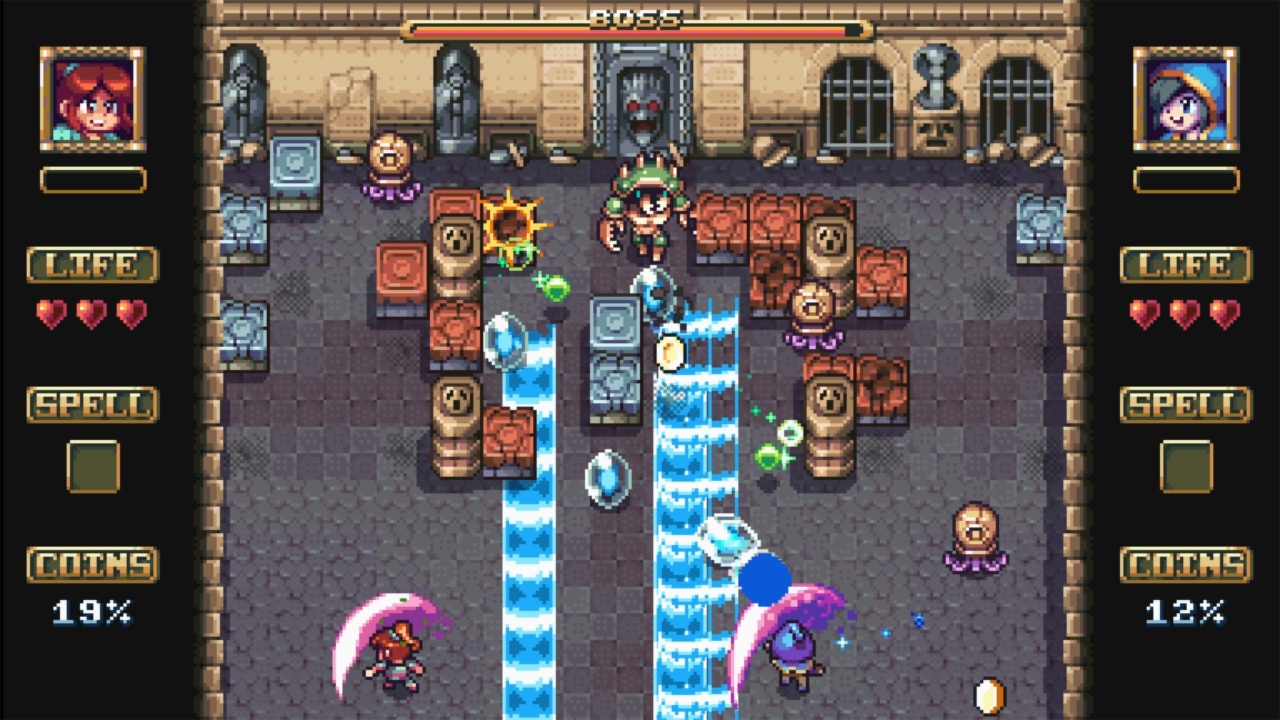 Strikey Sisters really does it’s best to balance a good fantasy adventure game with a brick breaking concept, though the line gets hazy at times. For example, you have three hearts each stage, and you lose a heart either when you get hit by an enemy OR the ball falls off the screen. These hearts can be refilled by fried chicken pickups, or mitigated by a magic cloak that allows you to take one hit for free (including dropping the ball). You can just run into the ball, or you can try and control the angle a bit by hitting it with your sword, which is also the only way to deal with monsters who get too close and your ball is too far away. You power up for a strike attack, which is the most invaluable tool to use: not only can it supercharge your ball to instantly break one brick (or destroy one monster), but a charge attack also deflects certain projectile weapons back towards monsters, either taking care of them OR breaking additional bricks. There’s a seriously complex number of foes to deal with, and checking them out in the bestiary only reinforces how many critters you have to deal with. That’s to say nothing of the bosses, who are their own brand of annoying and difficult when you can’t even hit them head on.

There’s a lot about the game that I liked. Besides the solid 90s synth soundtrack, Strikey Sisters offers a lot in terms of replay and enticement to enjoy the game. When you get into each level, the bar is set high to try and get everything accomplished in a certain way. Broken bricks drop coins, and a rising percentage meter lets you know how well you’ve done (with some incentive to try and grab 100% in a single stage). The level designs start out difficult and just get more absurd, with a ton of strategic, unbreakable pillars placed all over the place to challenge your angles and general geometry. The controls are surprisingly well mapped, allowing for functionality and fluid movements between casting spells that you pick up and wailing on the ball, with the added bonus that you can usually charge up an attack in a split second, so you don’t need to agonize over whether you have enough time to pull of the move. Plus, it translates SO well for the “sisters” aspect of the game. Having two players means two overlapping “paddles” to keep upwards of four balls aloft (there’s a multiball powerup you both can get) and two players also means a significantly faster playthrough on a game that can easily take several hours to solo. 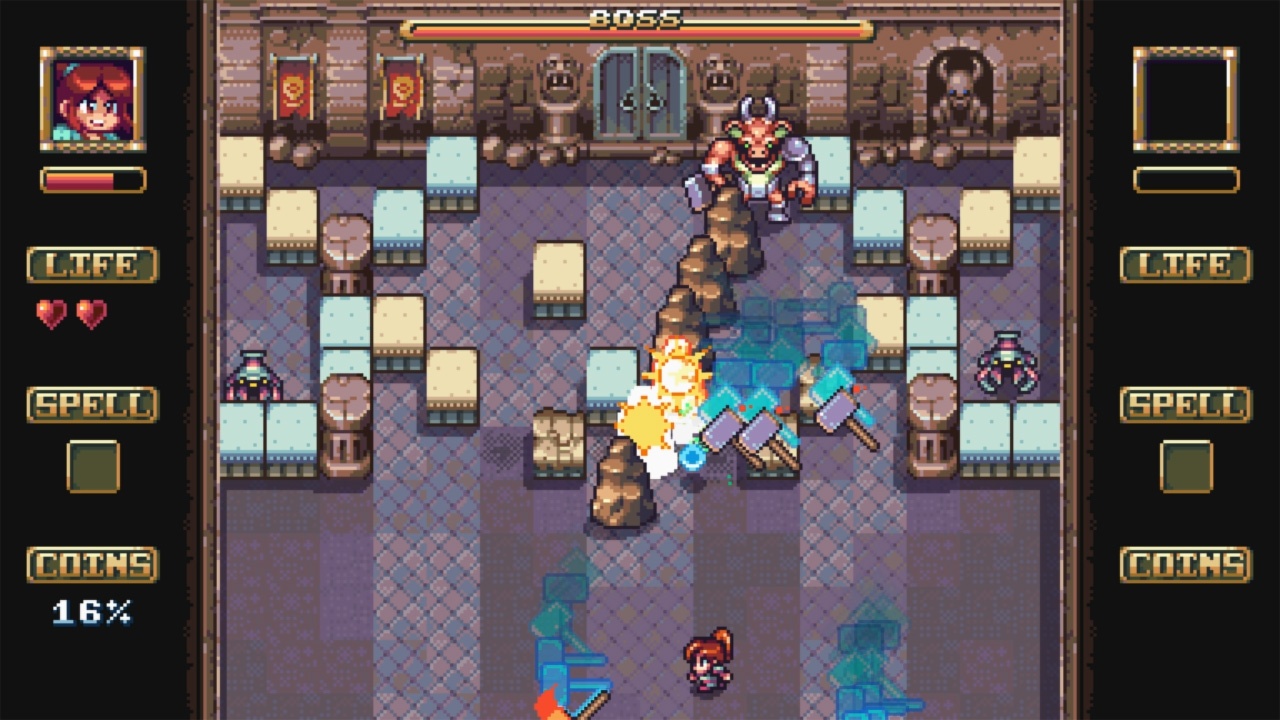 In that same vein, however, the solo gameplay of Strikey Sisters can feel a bit grindy. Without a second person to try and pick off the enemies or get to that one stubborn block in the corner, it can get a bit overwhelming. The monsters are not patient, and you often need to choose between the devil you know (your ball about to fall off the screen) and the devil you don’t (will that screaming skull miss me?). Additionally, you spend a lot of time just watching and waiting and hoping that the next monster will drop the seriously overpowered Dark Energy shot. The Dark Energy shot is a straightforward, unstoppable blast that takes care of any and all bricks and monsters in the way. More than once, when one frigging brick was tucked into a corner and I was busy trying to not catch on fire, the Dark Energy Shot was what finally finished the damn match. There was even a time where the angle was just right and my ball just feebly bounced between two pillars for, and I’m not exaggerating, a full minute. During that time, I smashed a couple of enemies and got two Dark Energy shots, effectively taking care of 75% of the level without needing to actually care about the “brick breaking” gameplay. It was strangely satisfying, but also left me with the feeling of “what the hell am I playing?”

Also, and my apologies to the voice actresses, but I hated when cutscenes happened. The voices of Marie and Elene were great to drop various quips during the actual matches (“here’s the thunder, there’s the lightning!” was a personal favorite), but their whiny dialogue for exposition before boss fights and such was nails on a chalkboard. It reminded me of 90s anime dubbing in the worst way, and it never got any better. Again, in the match, fantastic, also loved the deep voice that yelled out the power ups as you collected them (a thunderous tenor announcing “fried chicken!” never got old), but the cutscenes made me mash through them as fast as possible to get to the other side.

So where does that leave Strikey Sisters? This is a damn interesting game, and it performs well on the Switch. The price is the same on the console as on Steam, and I can’t be mad at that, especially with some extra levels and additional goodies added for this port. Single player can potentially be a chore, but, when the levels lineup correctly, you can still blitz through it in no time flat. Two player mode is where it’s at, and you can easily do it with a single JoyCon so arguments about controllers need not occur. If you’re a fan of brick breaking, arcade style action, and some fast-paced mayhem, then you might want to join the Sisterhood of the Traveling Bricks after all.

One of the most interesting takes on the brick breaking genre, Strikey Sisters can be chaotic and unbalanced, but still a fun and fantastic adventure overall.