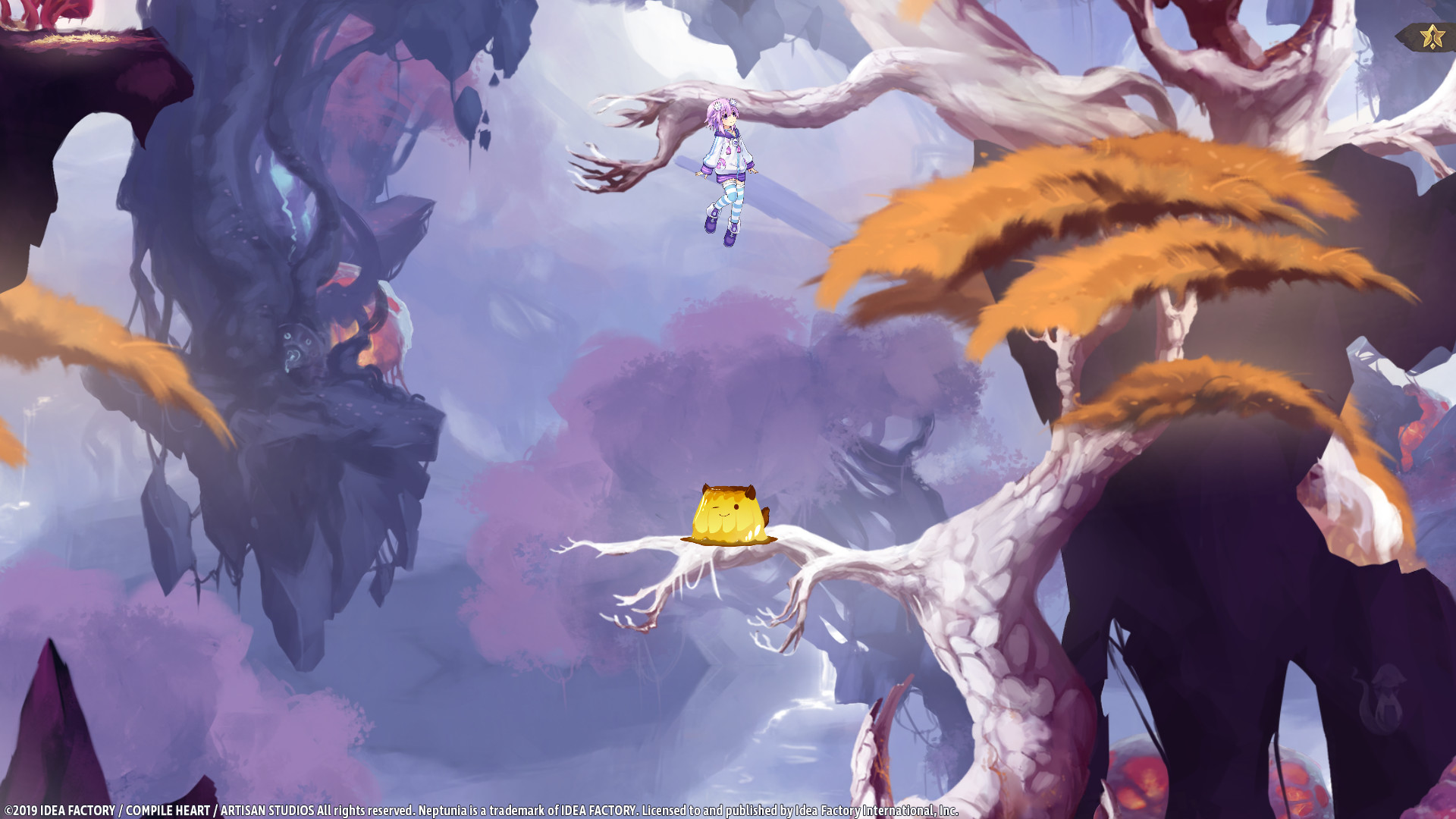 It seems like Compile Heart and Idea Factory are really trying to work outside their comfort zones with the Neptunia games. After the runaway success of Megadimension Neptunia VII, we saw 4 Goddesses Online (similar playstyle but different tonalities), Neptunia Shooter (a bullet hell pixel shooter) and now Super Neptunia RPG, a 2D exploratory adventure. It makes sense to give it a try: since the Neptunia series is so referential to how important games are, a nod to both the classic generation and the current trend of trying to resurrect retro games makes perfect sense. Additionally, I wanna see more from these devs onto the Switch: Moero Chronicle H was a massive surprise, and Fairy Fencer F: Dark Forces was enjoyable, if a bit rough around the edges. But we’re gonna need to see a better effort in order to keep the momentum going, because Super Neptunia RPG has a couple of big hiccups.

At first, the game is phenomenal. Super Neptunia RPG drops you right into an apropos moment where Purple Heart (Neptune’s Goddess form) is fighting some kind of shadow that is clearly a dark version of Purple Heart. The other three Goddesses join in, and it seems like they win, but then the shadow makes them all disappear. We jump cut to Neptune waking up in bed, in a house that isn’t hers, with no memory except her name, and a group of masked secret police demanding she pay her game cartridge tax. Turns out, in this version of Gameindustri, 2D games are supreme, and the ruling force is a group called Bombyx Mori, who make citizens give them games regularly or face rehabilitation in the Trial Grounds. Neptune eventually runs into Chrome, a mysterious woman who seems to know her and her companions (who Neptune is reunited with fairly soon, and they also have amnesia), but won’t reveal how or why. Now Neptune must prove herself to be a hero, and, aided by Noire, Blanc and Vert, sets off to accomplish some quests, unheave some government, and get the full story from Historie, the kaomoji-talking book that only Goddesses can read.

There’s an amazing amount of effort that went into the creation of Super Neptunia RPG, and it’s evident from the very beginning. Despite being in 2D, the capture of the essence of the Neptune games is strong and presents itself at every opportunity. You have the capability to get hilariously overpowered, and often need to in order to get past certain bosses and bad guys. Enemies tend to waffle between cute and scary, with classics like the Doggos returning for familiarity, and everything is done with fantastic detail in terms of NPC actions. The areas between towns are mapped out like dungeons, and, especially at the beginning, you do a lot of running around back and forth between rooms, getting lost and referring to your dungeon map to figure out which way is out. Enemies won’t respawn till you leave the dungeon entirely, so you don’t need to worry about getting swamped, though the drops of healing berries and such are strong enough that you’ll hopefully be able to avoid a game over from battle. That happened to me a couple of times early on and it can be discouraging since we’re still using a fixed “Save point” system and I would explore for a while before remembering to save. In that aspect, Super Neptunia RPG is bang up on capturing the classic fallacies of oldschool RPGs. 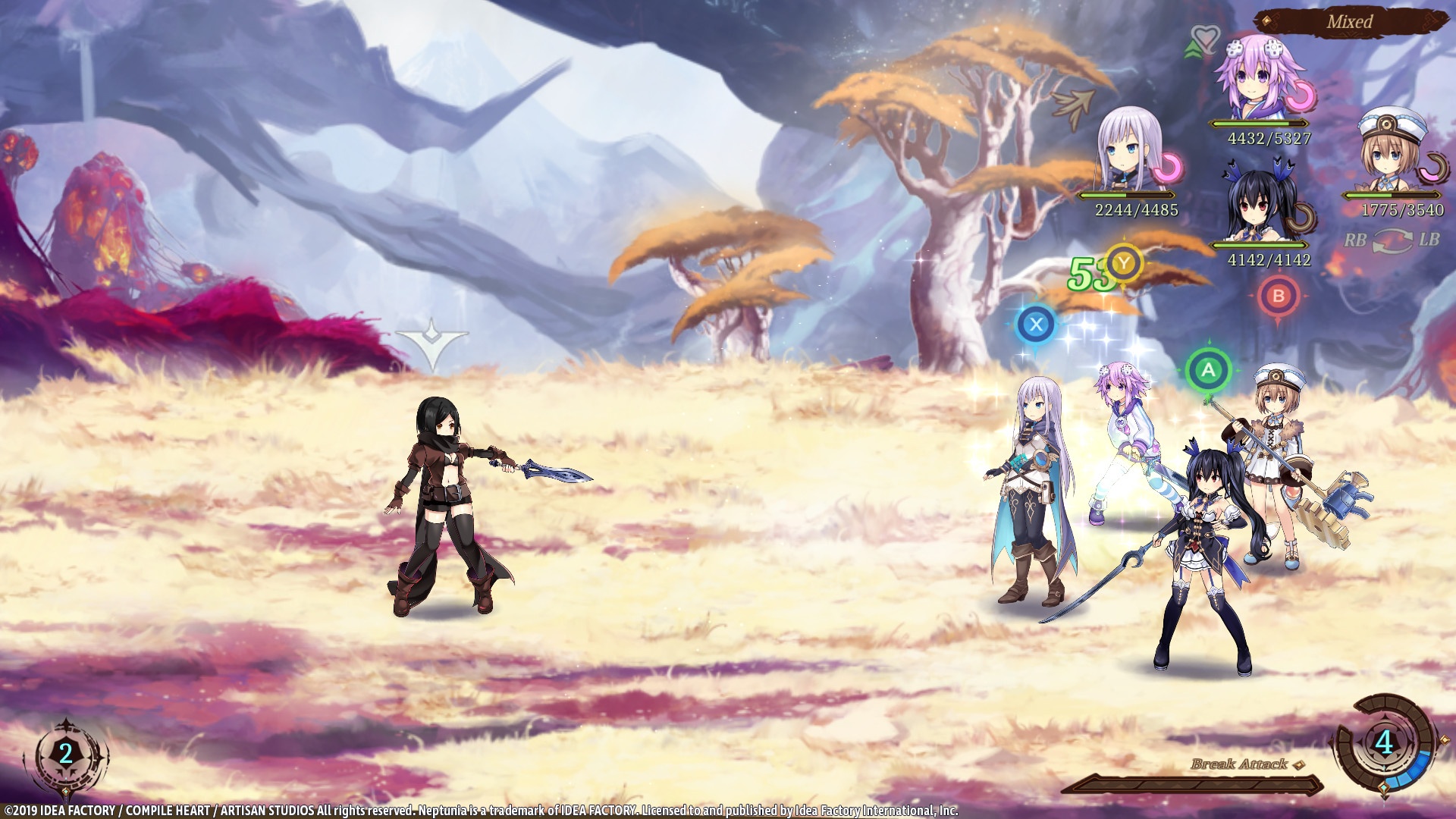 Combat is a sort of nonstop ordeal, in which a battle meter charges and then you get to decide who in your party swings. The meter charges up to 12 slots, and each character uses a certain number to attack (traditionally 2 or 3). Depending on the formation that you take prior and during battle, the attacks change. For instance, if Blanc is in the far back role, she’ll heal other members of the party, but she can do a ranged attack if she’s in the top of the diamond, and so forth. There’s elemental damage that you need to remember, because successfully using an attack that an enemy is weak against leads to an instant recharge of a couple blocks and can create a nonstop flurry of attacks. Oh, and, once everyone is back together, you gain the ability to transform into your Goddess selves, which is essential to certain big boss fights, and Break Attacks, which is an ultra powerful move that only comes about after you’ve been fighting for a LONG time. Combat also has this elemental deal which is occasionally a massive pain. Sure, if you get that weak attack in, that’s awesome, but if you do something that is absorbed, you’ll heal the enemy and lose extra slots on your battle meter. When you have those rare but far too often moments of “everything I’m doing gets absorbed,” your choices are to try and use combat items and berate the enemy into nothing, or to run away, which is what I did more often than not.

It’s hard to tell whether what Idea Factory did with Super Neptunia RPG is good or not, because they fully captured a lot of the old school RPG design, scars and all. For example, the pacing for the story is excellent, and is further supported by the hilarious and excellently localized dialogue that is peppered throughout. You have plenty of time for Neptune to get situated, then you get Blanc and Noire, then lose Noire, get her back, Chrome shows up for a bit, and eventually get Vert, which took far too long for my liking. The game is positively DROWNING in side quests, which are given to you by almost every NPC under the sun, and each has certain levels of commitment and difficulty. Several are just “give me money and items,” which you might already have on hand when you accept the quest, so it’s over before it begins. But some ask for a specialty item that might be half a world away, or to accomplish something you literally can’t do until much further along (getting to people that you can’t reach without a double jump, for example). One dude gave me a quest to kill five hundred monsters in a game where the average encounter gives you between one and four monsters at a time. It was literally like “alright, see you in a few months, I’ll be here.” as a result, some of the quests just highlighted how grindy things were going to get, and I wasn’t wrong.

Additionally, I was expecting Super Neptunia RPG to handle a lot better than it did. I eventually got used to the slight choppy nature of Neptunia running and dashing, and the slowdown that came from changing formations in the battle, but it was very off putting at first, especially for a game that is clearly supposed to be less demanding than its 3D predecessors. There was even a bit of visible lag moving through the menus to toggle between inventory and quests or equipment and skills. You can technically only move left and right (a true 2D RPG), but you then need to sometimes move on branching paths up and down, and you don’t always step onto the place you want to go if you’re not nudging the joystick correctly. For a pretty large game with a great team behind it, this should have been smooth as silk, not just “alright” with some great inner content to distract you from the way the engine runs. 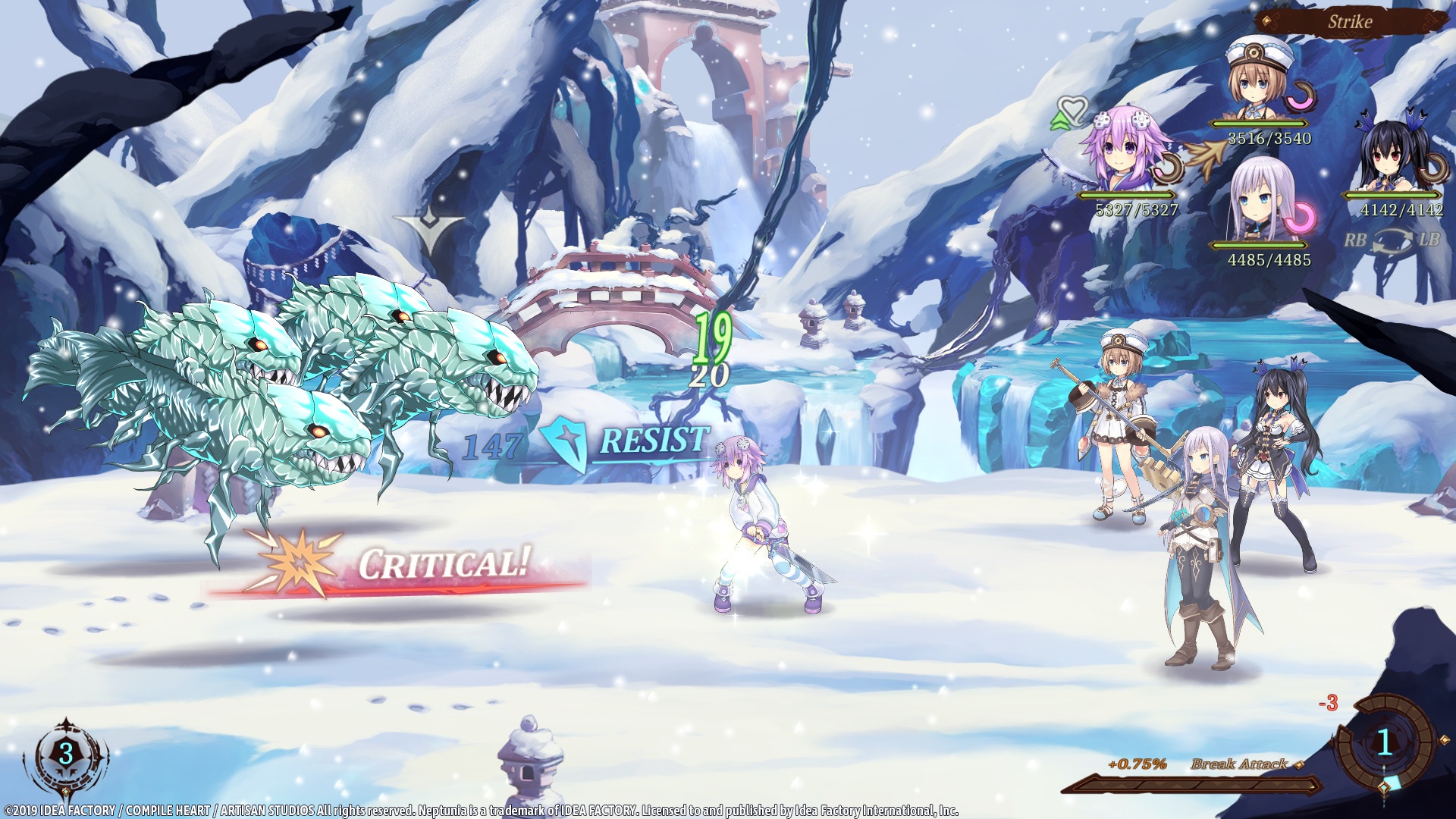 Then again, Super Neptunia RPG does hit all the notes that you’d expect from Nep Nep. There’s plenty of 4th wall breaking commentary, and the writing is legitimately funny. The 2D cutscenes are incredibly well done, with a lot of the Neptunia charm in facial expressions and mannerisms delivered time after time, backed up with awesome voice work (though I had to keep it in Japanese so I didn’t cut off my ears). Neptune repeats the same quips while dashing or jumping over and over, which made for slight annoyance, but was in line with what I’d come to expect. The 2D also cuts down a bit on fan service, but they still manage to sneak in the occasional cleavage display, panty shot, and Noire apparently sleepwalking to dress in cosplay. It’s a different coat of paint, to be sure, but it’s a Neptunia game through and through, from the oddball beginning to the dramatic end. Even the combat itself seems to work with Neptune’s wink and a nod to the game world: you can hold down the ZR and ZL buttons to fast forward combat and speed charge the battle meter, allowing the normally long-winded 2D fights to speed along as long as you can control yourself.

Super Neptunia RPG isn’t the best in the series, not by a long shot, but it’s a really clever and interesting addition to the collection.  It’s more accessible than some of the older games, has plenty for new and old fans alike, and stands proudly as the first official Neptune game on the Nintendo Switch. If you’re a big fan of Nep, you’ve already pre-ordered the physical edition and I don’t need to play this up any further for you. If you like oldschool RPGs, this one represents well with plenty of modern and interesting takes on things. If you’re just in it for 3D waifus, then this is clearly not the game for you, and I hope you’ll understand. Fingers crossed that we get a performance patch quickly to help smooth things out, and also hoping they don’t accidentally nerf the Metal Doggo appearance rate. These supposedly rare monsters crop up ALL the time and helped power level me far beyond where I should be early on, which is how I like my RPGs: crazy unbalanced and tons of fun to play.

Neptune’s journey to 2D packs all the fun and humor from the 3D series, and is only marred by some performance issues on the Switch.