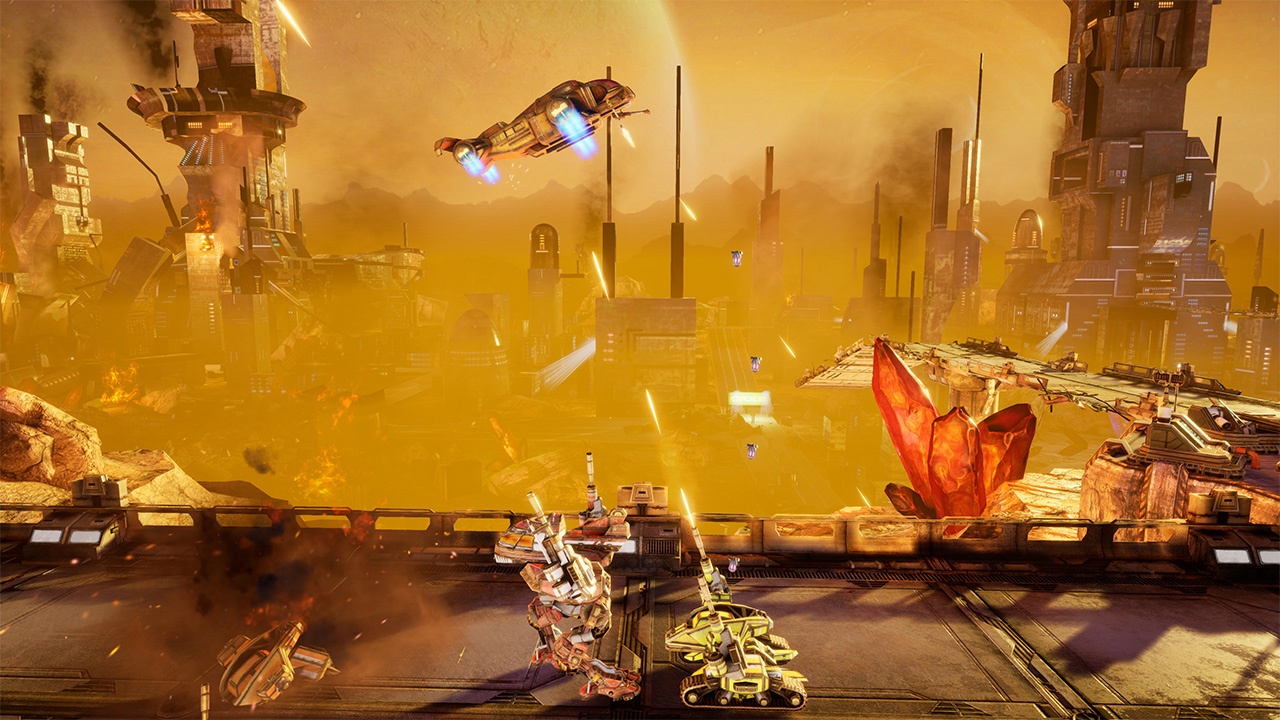 Love ‘em or loathe ‘em, the genre of shoot ‘em ups, or shmups as they’ve become to be known, have long been a popular form of gaming. After all, being a child that grew up when video gaming first came about, I still remember with fond memories the local arcades coming to life with the sounds of Space Invaders and Defender; the first forms and early adopters of its genre. It’s a simple premise that has spawned many successful titles over the years, such as  Time Pilot, Galaga and Gradius. However, in a world that is now dominated by 3D graphics or open-world adventures, these little marvels of 2D magic have taken a more back seat position from the mainstream titles of today. That’s not to say that they’re not around anymore though, as many retro remakes or remasters still provide a cure for our itchy trigger fingers, as do some modern iterations such as isTom Games’ Red Siren: Space Defense as it launches a release onto the Nintendo Switch.

In its most basic form, the game runs as a 2D, side-scrolling, shmup. However, a lick of modernity has created something that is much more than that, with flashy graphics that give a third-dimension to the modelling, artistic backgrounds that stretch for as far as the eye can see with a detailed depth, twin-stick shooting mechanics and level of depth with the ability to buy or upgrade a series of ships and weaponry. The game itself comes as a port from the iOS and android platforms that saw a release during 2018. Originally an F2P game with micro-transactions, this new version ditches the pay-to-play side of things and presents a more intuitive control scheme with the ability to make use of the Switch’s joy-cons.

The story, well background really, as let’s be honest here, shmups don’t really need a story, revolves around an apocalyptic future that has seen the demise of the Earth’s natural resources. Private corporations have developed advancements in space flight and robotics, to develop private armies that have colonised the planets of our solar system to utilize whatever minerals and resources may be available there. The largest of these corporations comes in the form of Exacorp and to combat the ever-growing threat of rogue companies and looters from getting their hands on the company’s most lucrative assets, they have created a division called Red Siren; a combat squad with access to the best military hardware to defend the planetary installations that are dotted around the universe. 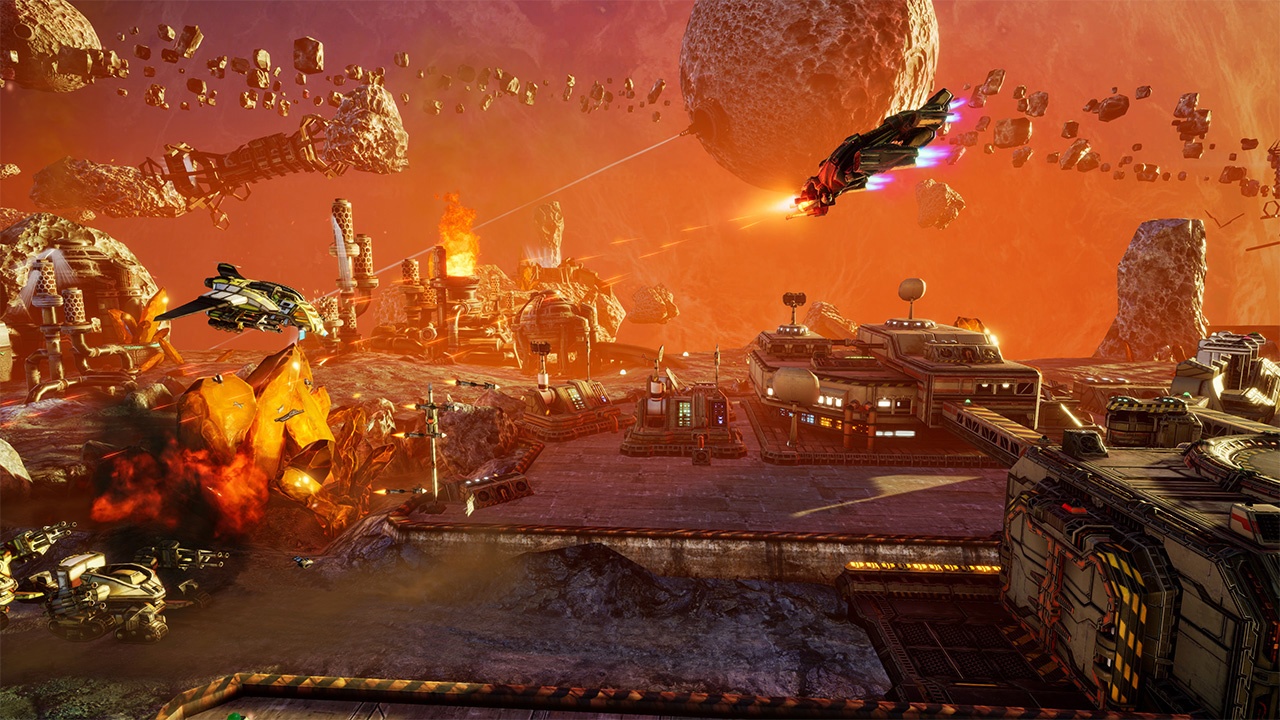 The game plays across a series of four interstellar locations, such as the moon or mars and a plethora of levels that take place within each of the locations. Each of the level designs follow a similar pattern, not in how they look but in how they play, with an ever increasing level of difficulty the further you travel within the game. Your base installation takes up centre stage and with an oncoming threat, you launch from your hangar in the latest VTOL-styled spacecraft in order to protect your company’s investment. Enemy units can come from the left or right of the screen, in either robotic ground forces or aerial varieties and make their to the central location of your base in order to destroy it. Early skirmishes can easily be dealt with from a quick burst of your trusty machine gun attachment, but as you advance deeper into the game, the enemy forces become much stronger with shielded units and absolute behemoths of tank warfare armed to the teeth with a series of weaponry.

To even up the playing field though, you can upgrade your own weapons or craft and even buy new models that offer bigger defensive stats or greater firepower and manoeuvrability, plus you can choose to further buy new weaponry in the form of bombs, missiles and a plasma gun. Some enemies even drop pick-ups that can grant you instant shields, weapon coolants or health. However, the real beauty of this title lies in the combat and flight mechanics of your craft and the weapons which you can use to dispose of the enemy forces.

Using a twin-stick mechanic, you have an unprecedented amount of control over your craft and its weapon systems; easily manoeuvring it across all angles as you flip from left to right or ascend and descend in a free-flowing movement that makes it sublimely easy to create a hard-target for yourself, as well as avoid the incoming rush of enemy fire. Each of the shoulder buttons fire a different style of weaponry too, with the L, R, ZL and ZR buttons firing their own respective barrage of machine gun fire, bombs, missiles or lasers. Manoeuvring your craft is mapped to the left joy-con, whilst the aiming of your weapons is tied to the right. It all adds to create an easily accessible control scheme that feels beautifully natural in its execution. 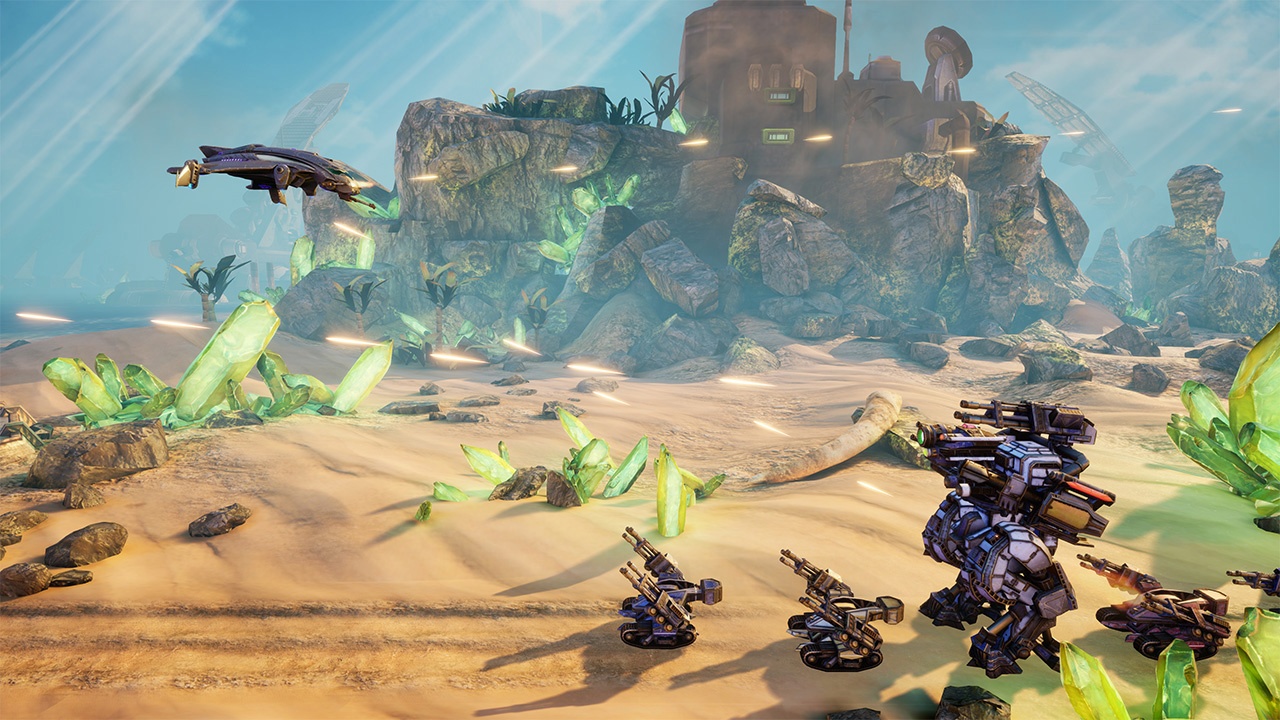 The combat too, is equally impressive with some satisfying explosions and firing executions that feel suitably meaty and hard-hitting. This creates an overall feeling of controlling something that is ultimately powerful and a worthy adversary to the renegade armies with which you combat. Explosions are fiery and solid in their audio qualities and each burst of gunfire or missile fired possesses a kick-back that roars in the face of your enemies. In fact, the whole presentation, from controls to mechanics and executions to elements all provide a real-treat to the senses, from detailed graphics and a booming audio that feels satisfying to play.

Each of the levels also come with a number of set parameters to add to the challenge of the game. These range in a variety of ways from completing the current level within an allotted time, destroying a set number of enemy types and anything else from using a specific weapon to a certain number of power-ups. Completing these objectives awards you with stars and monetary values that go towards the purchasing of extra arsenals or upgrades to your current craft. With the F2P element of the game now missing, the game takes on more a flow, making it more easier to access the upgrades to ships and weaponry, as well as the purchase of new styles. However, it still can’t escape the need to grind through certain levels in order to accrue the funds needed for upgradeable projects, but in truth, these never really feel like a chore and are actually quite satisfying as you really feel the true power of your upgraded arsenal as you fly through the earlier missions again.

Overall, Red Siren: Space Defense on the Nintendo Switch presents the most definitive version of the game to date. It’s casual style sits nicely on Nintendo’s machine and its pleasing presentations and tight controls creates a shmup that holds the same exciting values as the forebearers of its genre. It contains the same level of thrills as the retro classics that excited us as kids, yet brings a whole new level of modernity to add an extra dimension to the already thrilling gameplay. It’s pick-up-and-play, as well as its one-more-go mentality produces an addictive premise; something that is further bolstered by its depth of upgrading and extra level tasks. It’s hardcore, it’s meaty and above all, it’s an extremely playable title that satisfies to the core.

Red Siren: Space Defense is a deeply satisfying shmup that holds the values of its genre’s origins, yet also brings a modernity that genuinely thrills.