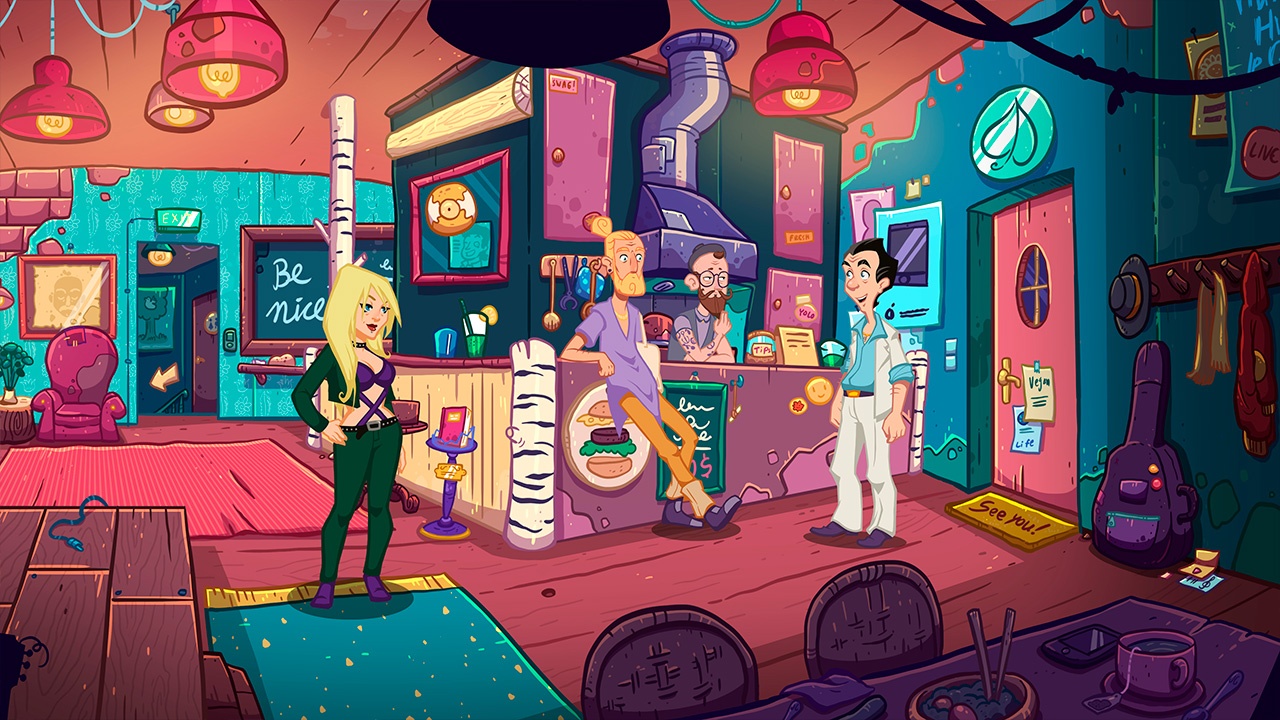 When it comes to controversial video games, then surely the Leisure Suit Larry series holds the crown for, not only being one of the most infamous games in the history of gaming, but also for being one of the oldest with its titles now spanning over thirty years since its original release in 1987. However, its origins can be traced back to as far as 1981, as its model was derived from the text adventure, Softporn Adventures and its adult themes have continued, through sagas and spin-offs, to now produce a total of twelve titles with his latest outing in Leisure Suit Larry: Wet Dreams Don’t Dry as it shoots a load onto the Nintendo Switch.

Larry himself, has seen many iterations that have followed a number of genres, from its early beginnings as text only to point-and-click adventures and more modern interpretations that have portrayed him in a more third-dimensional role. He’s also been partnered up with several developers and publishers over his time, from Sierra Games to Team 17 and Codemasters. It can also be said that he’s acquired a bit of a cult status, as since his last “really true” outing as Larry Laffer and arguably his most controversial title, Leisure Suit Larry: Love for Sail!, in 1996, many fans have been left pondering on what had become of their titular hero and what the future held for him through a series of unreleased and cancelled games.

Developed by CrazyBunch and published through Assemble Entertainment, Leisure Suit Larry: Wet Dreams Don’t Dry continues along its adult themes to fill the hole that had been left for so many years; even to the point of bringing back Jan Rabson, the original actor in providing the voice of Larry. Without giving anything away, the story follows the exploits of Larry as he awakens within a dark and mysterious place. As far as he is concerned, he still reigns in the eighties, but upon his exit, soon realises that things aren’t as they seem, as he now finds himself within the modern world. Although some things have changed, others remain the same, such as Lefty’s bar where he is re-acquainted with his old friend. From here, he discovers the advancements in technology since the days of leg-warmers and deeley-boppers and, more importantly, the societal shift towards online dating. 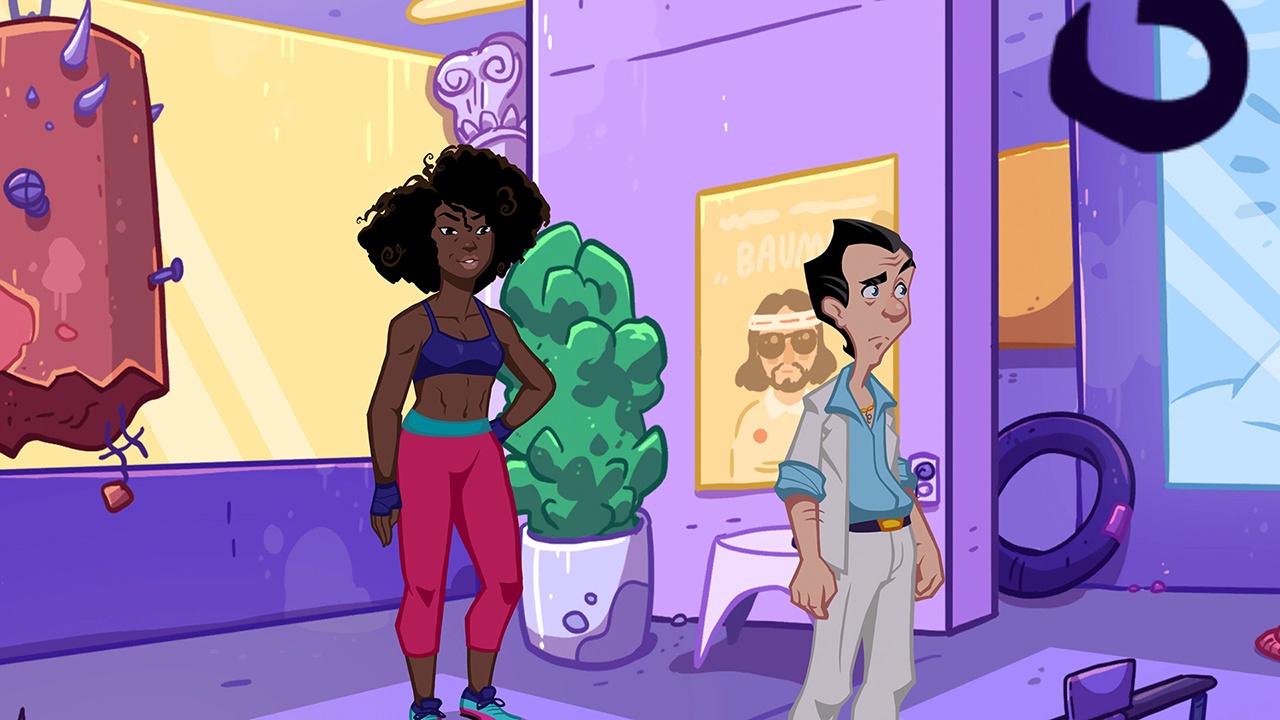 After acquiring a mobile phone, Larry embarks on a journey through the town of New Lost Wages in order to date as many people as possible, as well as try and reach a points total on his dating app in order to win a date with the girl of his dreams, Faith; an executive within the technology corporation of Prune, a parody of Apple. As he travels around town in his pursuit of dating and, ultimately, bedding his prospective partners, Larry is tasked with fulfilling a series of quests to win their trust; thus boosting his scoring on the app and taking him a step closer to his dream. In following with the themes of the series, Wet Dreams Don’t Dry contains a lot of adult humour and risqué depictions. There’s nothing particularly hardcore or triple-X here, it’s more double-X and erects itself more on the softer side of porn that skirts around the boundaries of common decency.

For instance, one particular quest tasks Larry with acquiring a book for a wannabe stripper who wants to add a touch of literacy to her act; its title being ‘The Cunning Linguist’. If you understand the humour here, then you’re probably old enough to enjoy this game’s parodic comedy and adult themes. If not, then you probably really shouldn’t be thinking about playing this latest instalment of Leisure Suit Larry. However, it isn’t the adult themes that come to the fore within this game. The majority of its charm and comedy comes from its hilarious parodies of modern life. Apps such as Timber, on which you can scroll left and right to like or reject a series of profiles from people such as Anita Dickinme, Dick Ryder and Maxime Pain. Then there’s Farcebook for the fake news or Instacrap that keeps a photographic record of your many encounters, as well as provide a mockery of today’s societal pursuits of the perfect pose or profile picture in the youth-driven practice of narcissism.

As well as its parodic nature of modern life, the game also keeps a firm foot within the eighties, with some equally hilarious spoofs that revolve around many of the mainstream subjects of the time, as well as produce a rather clever part of the game in which you get to play as your eight-bit self in a question of the morals of your past actions. Again, if you’re old enough to understand its mockery, then there’s a lot to enjoy here. Larry himself, still remains the same chauvinistic self, but with a more modern portrayal, creates a subject matter that deals with today’s attitudes towards relationships; giving you a freedom in choice, as the player, to embark on more LGBT-friendly liaisons, although whatever the gender or orientation, it’s rarely Larry that’s in control of the situation. 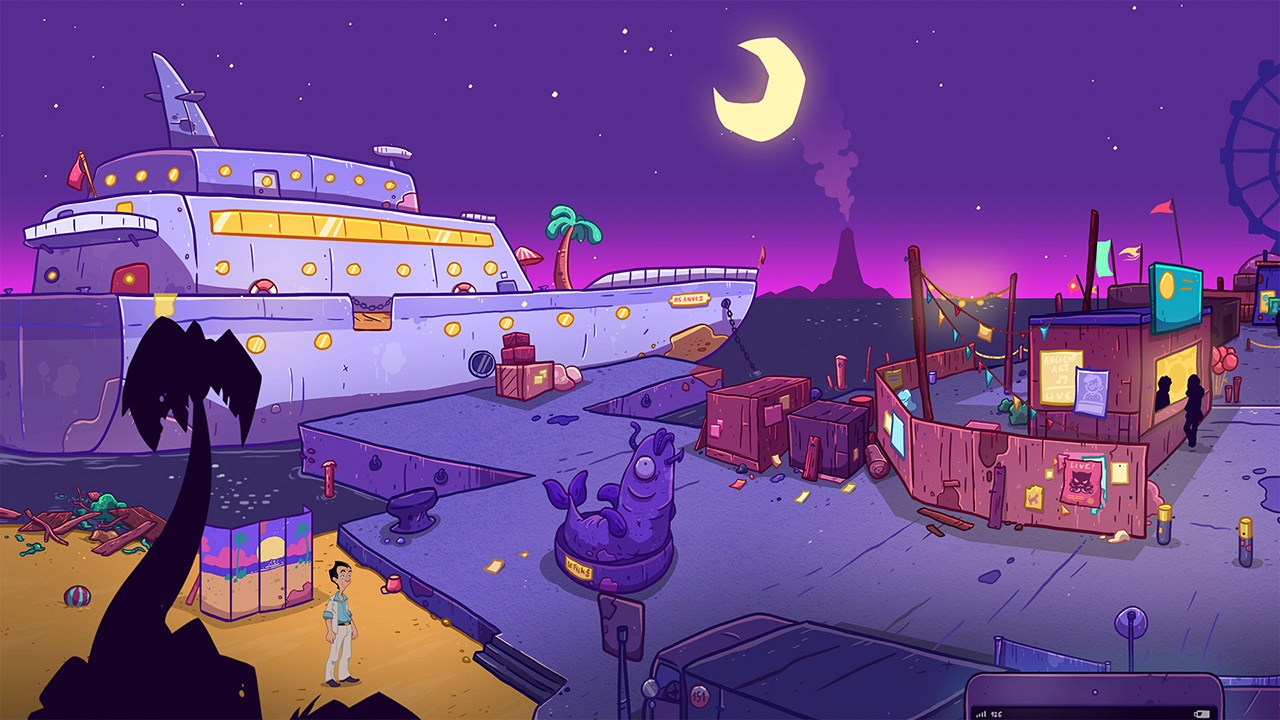 In terms of how the game plays, its click-and-point style is presented in a very animated way. There’s plenty of interaction, either with a variety of characters, the scenery itself or through the applications of your mobile phone. Everything is superbly voice-acted and the animations of the locales and characters are fluid. It’s almost like controlling your very own cartoon-production. As with most games within its genre, you are tasked with fulfilling a series of quests by acquiring certain objects or combining items to solve a series of puzzles. Whatever interaction you make, you can always be assured of something always going on. You may find something that you can’t acquire yet, but there will come a time when you will or you pick up an unassuming item, only to find that later down the line it becomes an important asset in solving a particularly problem.

For the most part, the majority of tasks and puzzles can be easily worked, whilst others can offer a challenge that sees you kicking yourself when you finally figure out the solution. Other puzzles, however, can contain a more confusing solution that doesn’t really make sense. It’s largely a downside to some point-and-click adventures, but here, it can be seen as representing similar games from within its genre during the early years of gaming. Its execution of menu selections and mobile browsing are easily accessible, as is the control of your character and interactions within the environments. Although the narrative does revolve around the dating scene, Larry’s pursuit of sexual fulfilment and the circumstances of his sudden arrival in the modern world, it isn’t a story that keeps a firm grip on you. However, it’s simply the humour that keeps you playing and ultimately, makes it an extremely enjoyable romp.

Overall, Leisure Suit Larry: Wet Dreams Don’t Dry is a very welcome return to form for the controversial character. There’s enough here to keep fans entertained with its parodic nature to modern times and throwbacks to its past. However, there’s still a lot here for newcomers to the series to appreciate as well. Its adult nature and content makes this a game that is in no way ideal for younger players, yet despite its borderline crudity, isn’t enough to warrant it decidedly smutty. As long as you can see the humorous side to its sexual themes, then you’ll find a lot of enjoyment in this title. It presents a stellar example of point-and-click adventuring in its general presentation; although it does contain a few nuances that plagued its genre during the early days of video gaming. It’s hilariously funny as much as it is hilariously mad-cap and it’s in this premise that makes the game highly playable. So, if you’re one of those fans who has ever wondered what happened to Larry Laffer, or are new to the series and are intrigued at what all the fuss has been about over the last thirty years or so, then everything will be answered within this game. Just be prepared to keep your tongue firmly in its cheek and your hand firmly gripped on your Joy-Con.