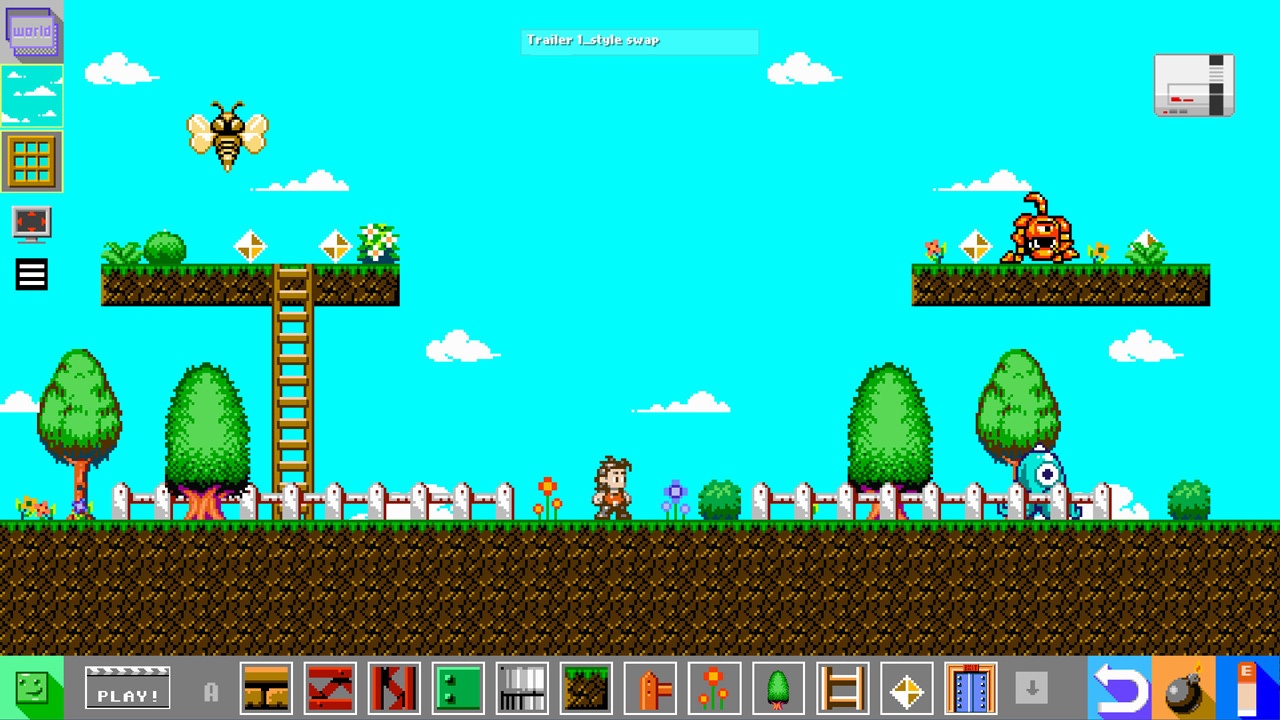 Creation within gaming is a frontier that still feels vastly untapped. Sure, you’ve got crafting titles and some various creation ideas in general, but we need to see something on the scale of RPG Maker and, moreover, the would-be creators with the time and patience to execute it.  The Nintendo Switch has become a great home for people of all walks to try their hands at making something, from the classics like Minecraft to the more interesting and absurd (Animal Super Squad comes to mind). Now, with Mario Maker 2 just a couple weeks away, people are becoming ravenous for the next venture into creation, and sometimes people are just unable to wait a second longer. Super Icon is certainly hoping so, for their release of PlataGO! Super Platform Game Maker (by way of publisher PQube) is clearly hoping to grab the platform making crowd by the purse strings before they get distracted by something else.

PlataGo! is a simple platform gaming creation tool that seems to boast a fair number of ideas and features from the beginning. Creators are able to make level designs that scale to about 16x the normal screen size (moving side to side and up and down) with the goal of each stage being twofold: collect a number of gems about the screen, and make it to the exit door. Along the way, the player gets to encounter a number of traps, baddies, pitfalls and clever escapes in order to make it to their goal, and the game can very easily become as convoluted or straightforward as you’d like. When you first see the creation screen, I would recommend zooming out as much as possible: it really helps to appreciate the scope of the landscape to work with, and how much potential can be stuck into every stage that gets created. 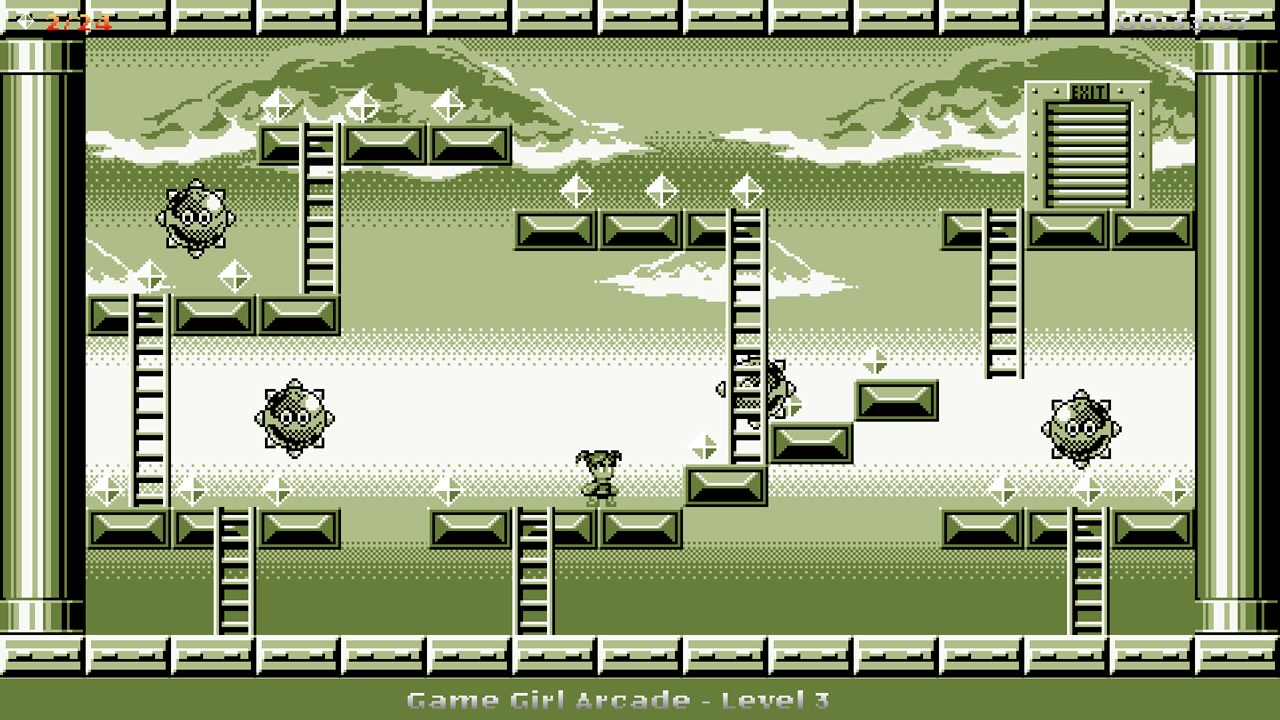 There is a lot of potential within PlataGo!, and I’d like to believe that, in better hands than mind, it could be fully actualized. For example, the game does have a vast array of filters to help get the gameplay and style to better match consoles of yesteryear. Unlike the upcoming Mario Maker 2, the core connection with PlataGo! seems to be the consoles that inspired generations of gaming and less the characters. It’s a bold move, and it makes sense to a certain degree. For example, with things like the ZX Spectrum, I couldn’t even begin to identify a classic hero or heroine that fell from that tree, but I recognize the aesthetic and the design that helped develop the modern platform and exploration adventure. Additionally, there doesn’t seem to be a limitation when you swap between the themes of the adventure: it purely affects the visual style and not the way the game performs. So, if you think those boomerangs and landmines look great in the Super Nintendo effect (and great use of the Super Famicom icon, as well), they might look pretty damn cool in the Gameboy filter as well.

The gameplay of PlataGo! is right up the alley of anyone who enjoys platforming in a classic sense, and that applies to the sadists who love murdercore gaming and those who want something just for light speedrunning and enjoyment. There’s a double jump feature, some wall jumping, a good mixture of power ups that can and will be used and a fair amount of trial and error to figure out how to accomplish things without it becoming frustrating. The controls are, arguably, floaty when you get into the game, but that seems more at home with how a lot of platformers from the past seem to handle, and I don’t begrudge them that. When you have a really great level designed and put forth before you, it taps into something primal to get you situated and running like crazy. It also gives a chance to see just how many choices for designs and icons exist within the creation software, with a variety of shooting, running and walking enemies, hovering traps and a very cool bubble mechanic that can potentially get you all the way home if you place it correctly/navigate well. Seriously, for the price tag, the amount of content is impressive, and I can’t be angry at that. 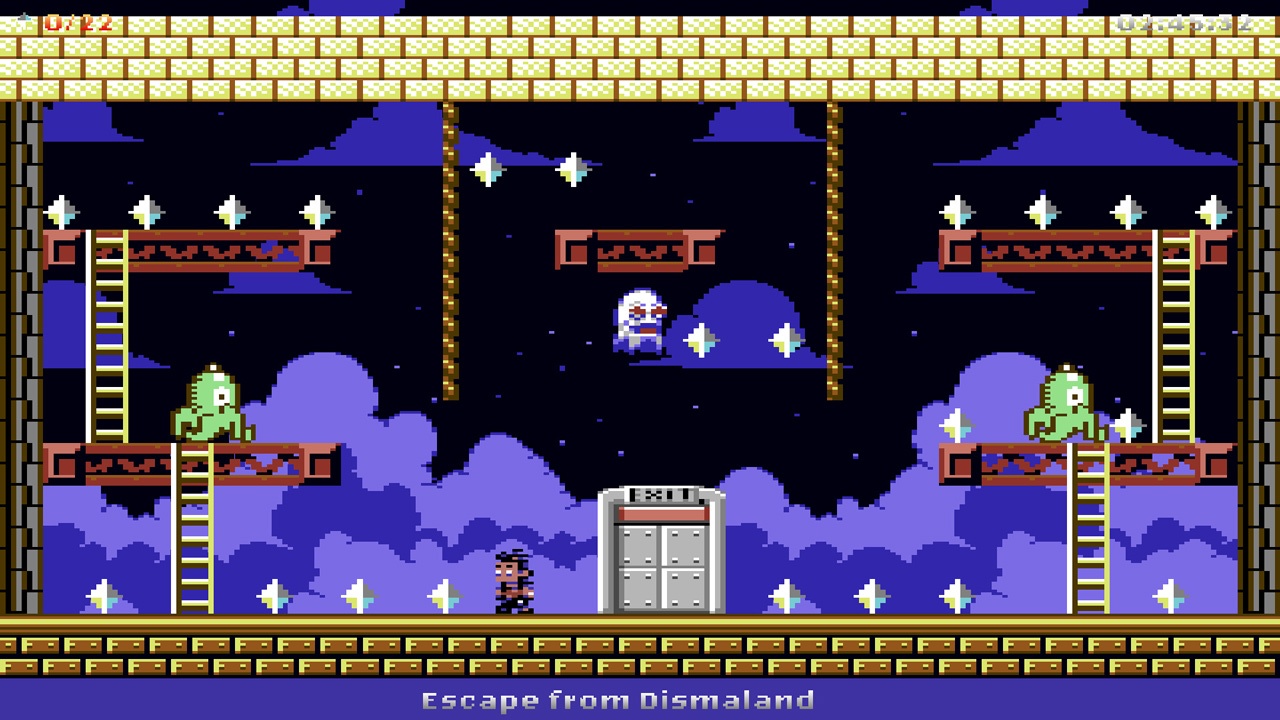 There is some umbrage, however, with how the creation looks and performs on the Switch. In docked mode, it can be an absolute nightmare trying to move around the creation cursor on PlataGo!. The small arrow that accommodates all the massive, pixel perfect creation and placement of objects can quickly jerk too far or stop too early, making for a waste of time and frustration when you need something just so. I can’t imagine trying to spend more than ten minutes of my time to get the entirety of a level created before I just throw up my hands and either stop or moved to undocked mode. Then, when you go into handheld, things get somewhat better, but even better is subjective. You have so many things to sort through in order to decide what to place that it can be daunting to rifle through the rows upon rows of objects to find. You absolutely need a stylus or some kind of selection pen because even my rather small fingers kept flubbing where I wanted to touch and put things. The more you add things, there starts to be a bit of a lag and delay, and there’s a noticeable pause when you want to change themes and screens to the point where I almost felt the game stagger and die. If you’ve come from the WiiU Mario Maker, or even the other game creators on the Switch, this might feel muddled and slow in comparison. Not to mention the whole thing is awash in the same, repetitive, damning music over and over again that you’ll need headphones.

Here’s my breakdown and it’s one that I hope rings true. There is nothing wrong with a good veggie burger. When you want a veggie burger, either because that’s what you crave or what your doctor says you should have, you can eat that burger and be happy. However, if you’re in the mood for something with beef, and a friend hands you this veggie burger and says “this is just as good,” you’re going to be disappointed, and you might even grow to hate your friend and his stupid vegan partner who convinced him to do veggie burgers. PlataGo! Super Platform Game Maker is a very coherent and vast tool that does justice to the idea of platforming and gives an affordable outlet to creators who are interested in this style of gaming. If, though, a parent, friend or relative attempts to buy this game to cover up for another game, it will be met with disdain and anger. Also, if we can please get some cross platform support (it’s out on Steam and mobile) and mouse support for the Switch, it will increase the enjoyability tenfold. If you want to make a platformer for the sake of platforming, you’ll find a great time within. If you want Mario Maker at a discounted price, be prepared to be sad.

PlataGo! gives a place for platform creators to experiment without needing their main character to have a mustache.