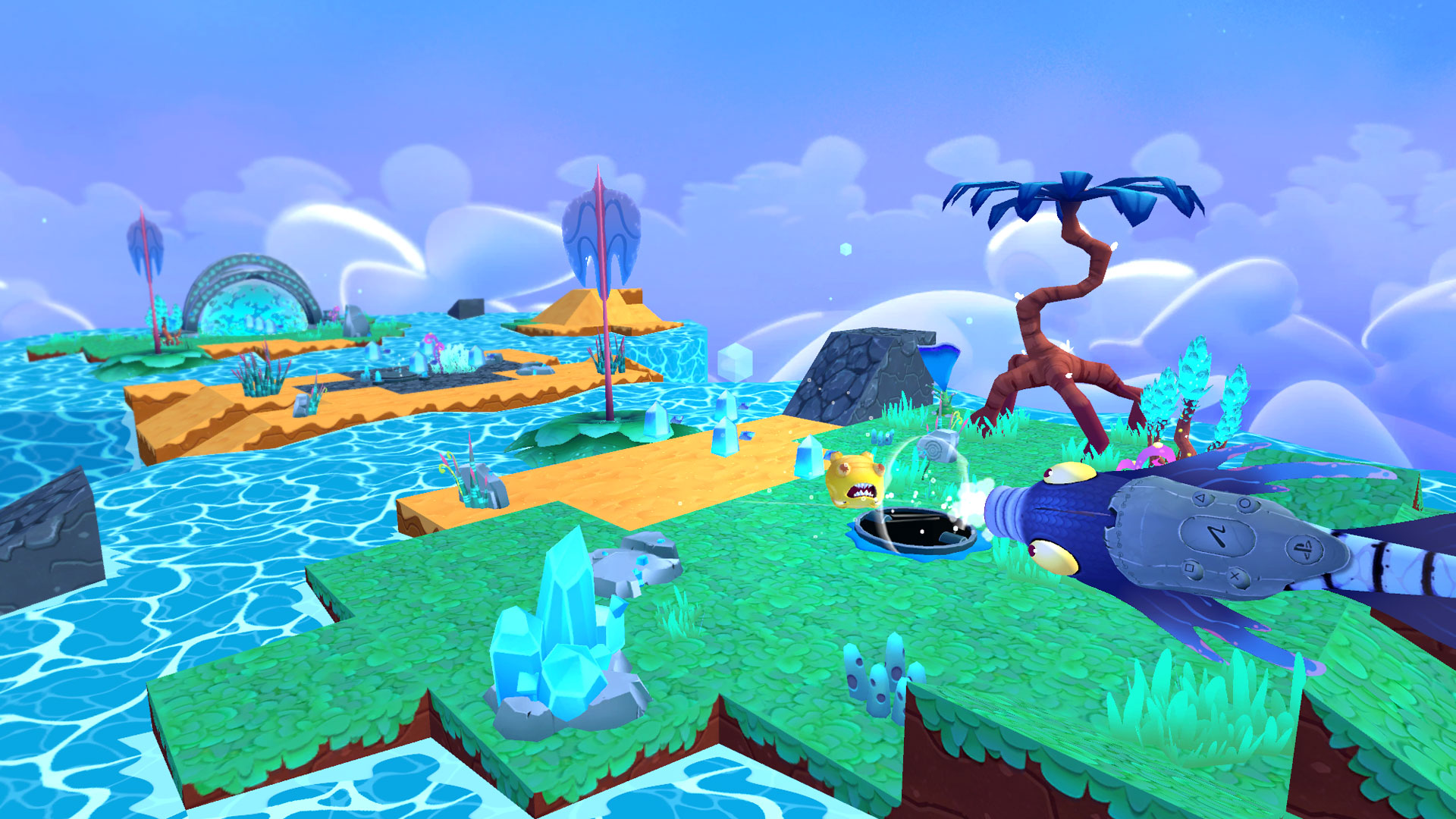 The PSVR has ample puzzle titles, but the majority of them make up the bottom of the bargain bin that the digital world can be a hive of. Squishies price tag leans more towards the premium marketplace, and while its gameplay is unique, it’s often an experience that is so horribly frustrating, that you’ll want to throw your motion controllers through your TV screen, despite being absolutely enthralled by its beauty.

Squishies USP is simple – guide the cute little blobs around the map and to the portal to win. To do this, your motion controllers are replaced with two fish who have the ability to blow and push the Squishies around the map. As you guide your Squishies, you can collect a bunch of crystals too, so getting accurate becomes an art form. It’s as insane and as nonsensical as it sounds, but its irreverence is part of the game’s charm.

Squishies quota is fun, and using your two fish hands is hilarious, simple and effective. Camera control is key, so using the T Button on the Move controllers allows you to pan around and in and out, giving you ample room to properly guide your Squishie. Combining the two fish allows you to fully control the movement of the Squishie and is the most useful technique as the game progresses. 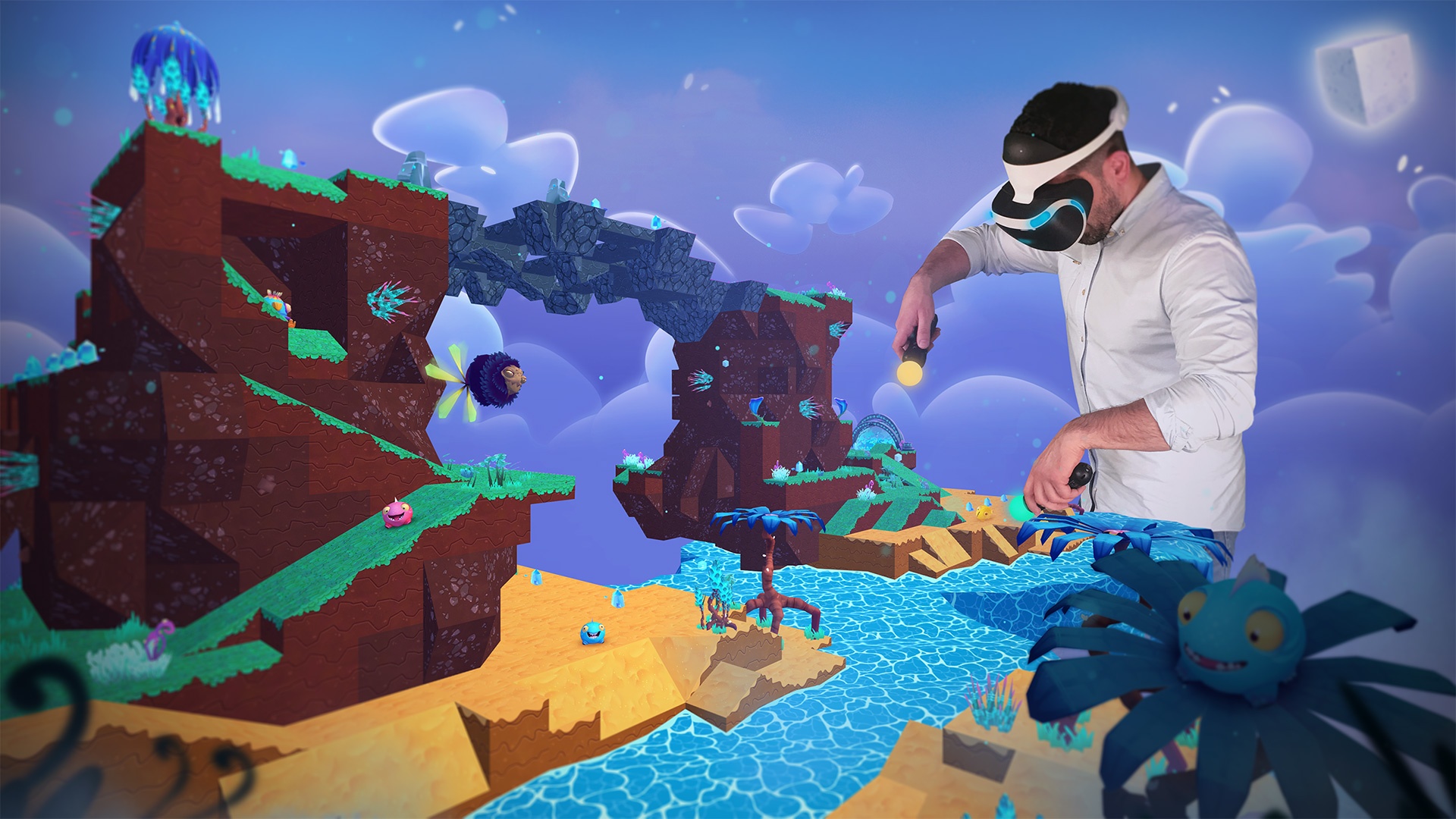 As you progress through the game, you’re required to pull off more intense moves to guide your Squishies, as well as get more than one home per level. The game relies heavily on physics, and as you progress, the game requires you to interact more with the environment to get your Squishies home. Throughout the games expansive campaign, you’ll guide the Squishies over tiny bridges, over floating platforms and up lava-filled mountains. Along the way, the challenge increases, forcing you to complete challenges such as slowly guiding your Squishies over lakes via movable platforms, and flinging your Squishies around via catapults. Obviously, taking it slow is the best method but, for example, if you’re directing the little guy down a hill and you have to react quickly to stop them falling into oblivion, it’s here you start noticing the cracks appear in the games foundations.

Moving quickly is painful, and it makes the most problematic issue with Squishies: the camera. The idea of holding two buttons at the same time, moving the motion controllers in succession, all while blowing and sucking to keep your character on the right path is almost impossible. It’s not a problem you encounter early on, but in later levels, where you’re required to pull off more in-depth moves, it makes the game almost impossible. It makes the more challenging levels more impossible – you can spend ten minutes making your way up a mountain after bouncing up and down platforms, dodging monsters and collecting all your crystals, only to then lose because you couldn’t turn the camera quick enough to save yourself from falling.

It’s not just the camera that makes the game difficult, but for a mid-range game its particularly intense on the VR. The camera often struggles to track the Motion controllers, but it also requires a massive amount of room to really make the most of the game. Often, your Squishies get stuck in inaccessible places, and getting them out requires you to twist and turn to attempt to remove them. Unfortunately, it means you’re forced to restart levels over and over, not because you’ve messed up, but because the game doesn’t allow for easy access when bugs crop up. 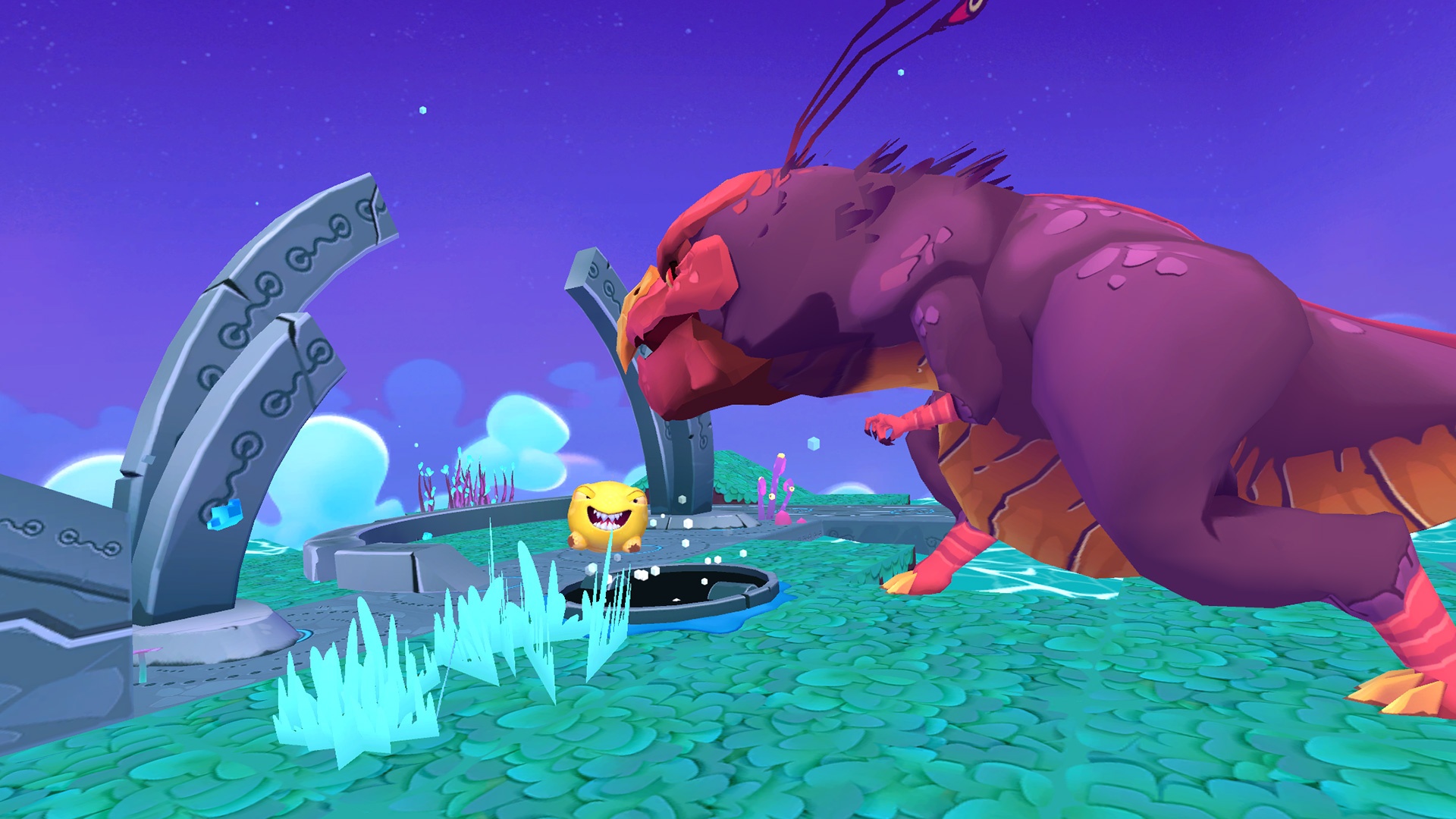 But for all its pitfalls, the game is absurdly adorable. The Squishies, fish and elemental monsters and creatures are cute and look great in VR, but more than anything else the environments look beautiful. It’s some of the best rendering I’ve seen in a VR title, and it’s greatly immersive. It’s also, when it works, a really slow-paced experience that doesn’t pressure you to work quickly. There’s no perma-death, only the frustrating re-treading of your steps, so if you want a quick pick up and play puzzler it’s a good shout, if you have the patience.

If you’re particularly enamoured with Squishies, there’s plenty of content to be had. With well over 100 levels in the main campaign alone, there’s hours of content, as well as plenty of replay value if you want to beat your high scores and perfect levels. There’s also a particularly well realised level creator that allows you to put together your own puzzles, as well as letting you sample some of your fellow Squishie fan creations.

What Squishies lacks in refined gameplay it makes up for in adorable character design and a gorgeous colour pallet. It’s easy-going nature makes the often frustrating issues less troublesome but no less disparaging. A passable but non-essential puzzler.

What Squishies lacks in refined gameplay it makes up for in adorable character design and a gorgeous colour pallet. It’s easy-going nature makes the often frustrating issues less troublesome but no less disparaging.