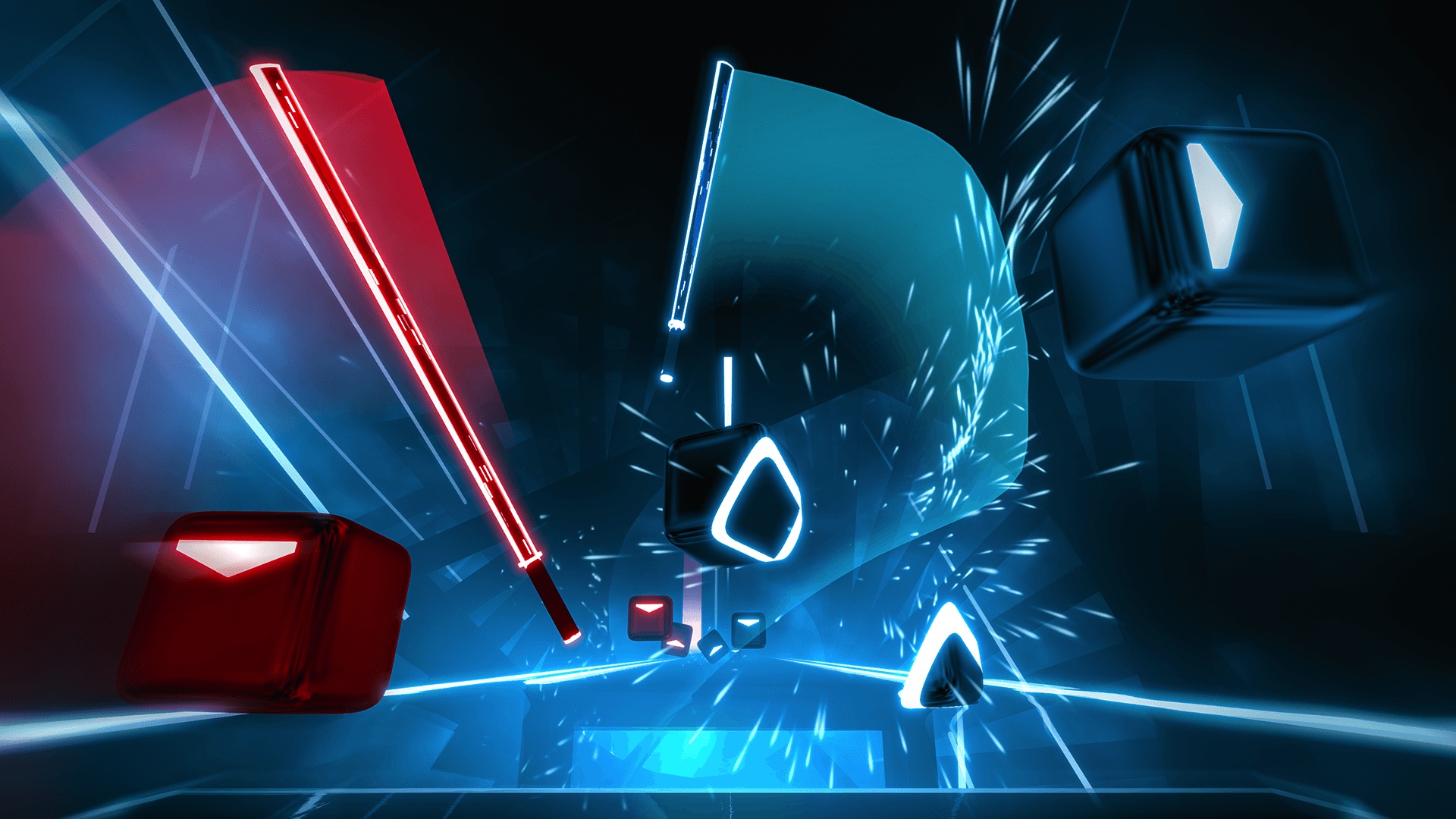 As far as rhythm games go, Beat Saber may just be the most infectious one to date. It’s easy to learn, difficult to master and impossible to put down. It’s not perfect, but it’s damn close, just make sure you have a safe word and a close friend to drag you away from the thumping, intoxicating bass when you find yourself lost in the maddening beats.

Beat Saber is more akin to horror-rhythm Thumper than say, Rock Band or Guitar Hero – Beat Saber’s simple design negates showmanship and focuses on tight performance and solid mechanics. That’s not to say it isn’t flashy, but it’s a different kind of showing off . Beat Saber is classy, and it does for rhythm games what Tetris Effect did for the puzzle stalwart – it enhances a simple concept and it makes it entirely fresh.

At its core it’s a simple premise, replacing your motion controllers with two Lightsaber-esc laser swords, with which you swing at colour coded blocks in time with the music. Along the way, different levels offer different challenges, such as dodging incoming walls or avoiding bombs. In a standard round, most blocks have a direction with which you need to swing to hit them, building up impressive combos as you go. Easy mode is a breeze, but it allows you to practice before you move onto the increasingly difficult modes, all the way up to the dizzyingly hard Expect+. 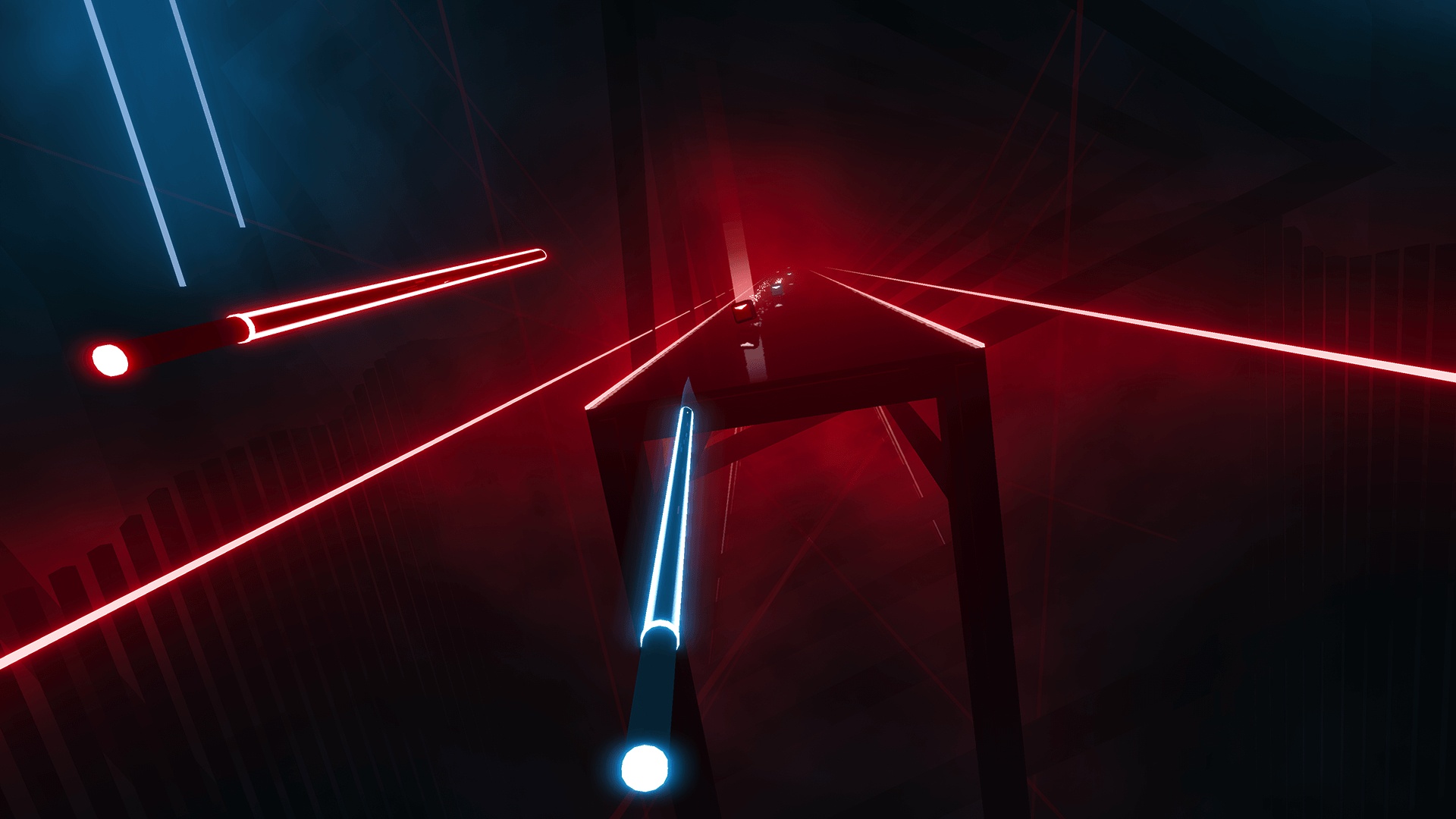 And its really that simple – an effective formula made even better with incredibly tight precision. The 29 level campaign eases you in, providing you with very basic beats and easy tasks to get you used to the controls. As you progress, there’s ample variation between levels, from disappearing directions on blocks to needing to achieve a certain amount of points for victory. It keeps the main mode feeling fresh when the limited soundtrack starts to get to you.

And that’s the only discouraging thing about Beat Saber. There’s little over 15 base songs here, and while all expertly composed, it’s missing at least another ten tracks to bulk out the selection. Not that the music in Beat Saber is at all bad, tracks like $100 Bill and the titular Beat Saber are great to play along to, and there’s two music packs available to purchase to build up your set-list – another collection of dance songs and a bunch of radio hits by Imagine Dragons. EDM fans will enjoy the fuzzy breakbeat of Commercial Pumping and killer bass beats of Breezer, but for those interested in hearing genuine dance anthems won’t find much here. It’s early days for the PSVR version of the game, and while I can’t see anything similar to the PC versions customisation (thanks to mods) coming to consoles anytime soon, I’m sure those of us that want a few more bangers will get our time eventually. 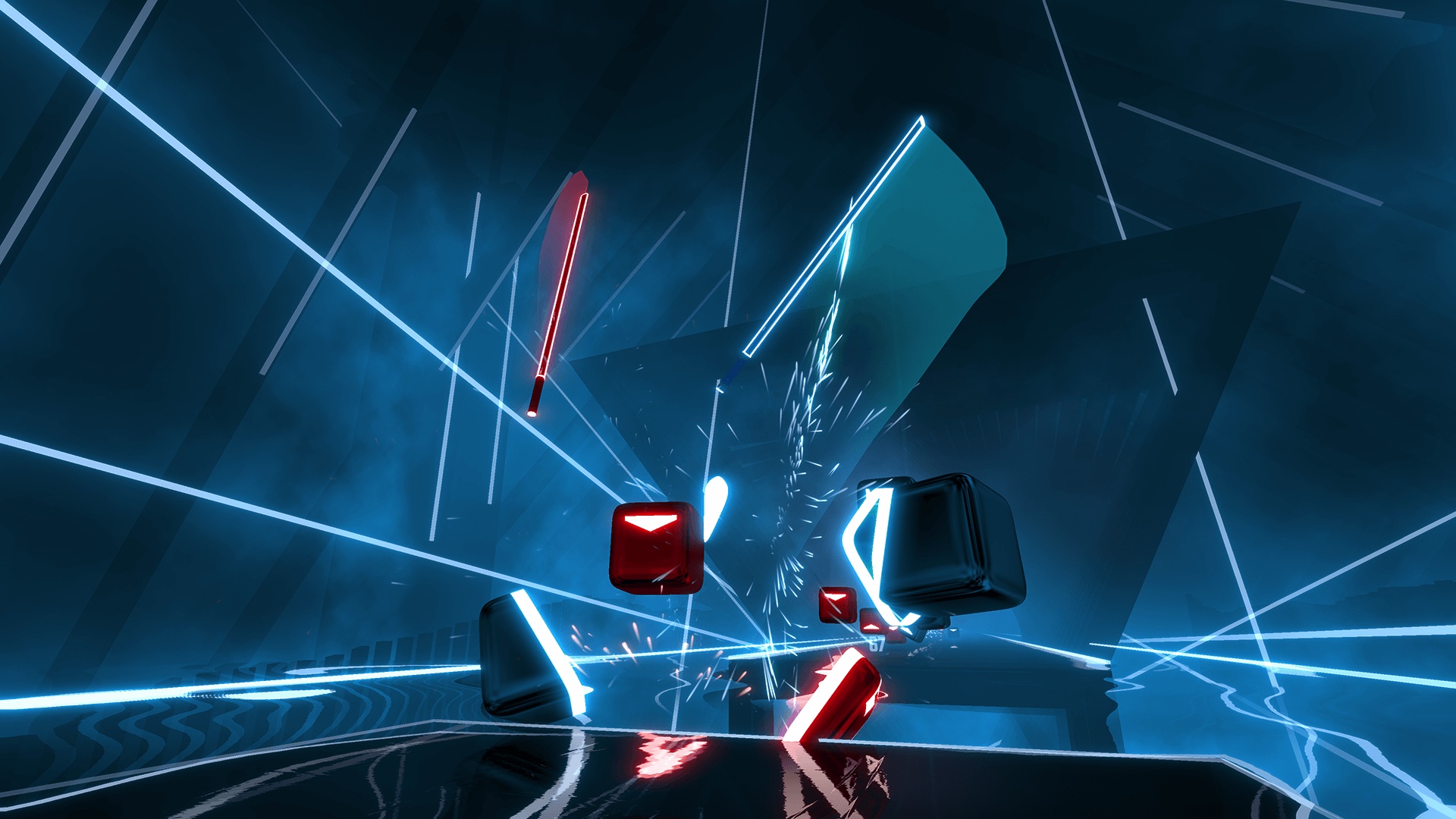 If you just want a quick round of Beat Saber, the game has a decent solo mode outside the main campaign. It’s pretty much a free for all, using whatever rule-sets you like to give you the experience you desire. Along with plenty of leaderboards to nail, you can mix and match between rule-sets to either give yourself a huge advantage (like no failing), or setting yourself insane challenges. This customisation pushes the games longevity exponentially, but it also doubles as a way to learn more difficult songs on harder modes before taking them on in the campaign.

Beat Saber isn’t particularly demanding on the VR either, demonstrating fantastic tracking and absolutely no bugs to report. It’s welcoming to play a VR title where I don’t feel I have to readjust between rounds – it simply plays perfectly, which is exactly what you want from a game that pushes you to put on the perfect show at all times.

Beat Saber is a triumphant rhythm game. It’s disappointing that the soundtrack is limited, but in the grand scheme of things it’s a small price to pay to feel like the DJ Jedi you’ve always wanted to be. Incredible gameplay, sharp precision and one of my favourite VR experiences to date, Beat Saber is simply unmissable for VR owners.

Beat Saber is a triumphant rhythm game. It’s disappointing that the soundtrack is limited, but in the grand scheme of things it’s a small price to pay to feel like the DJ Jedi you’ve always wanted to be.