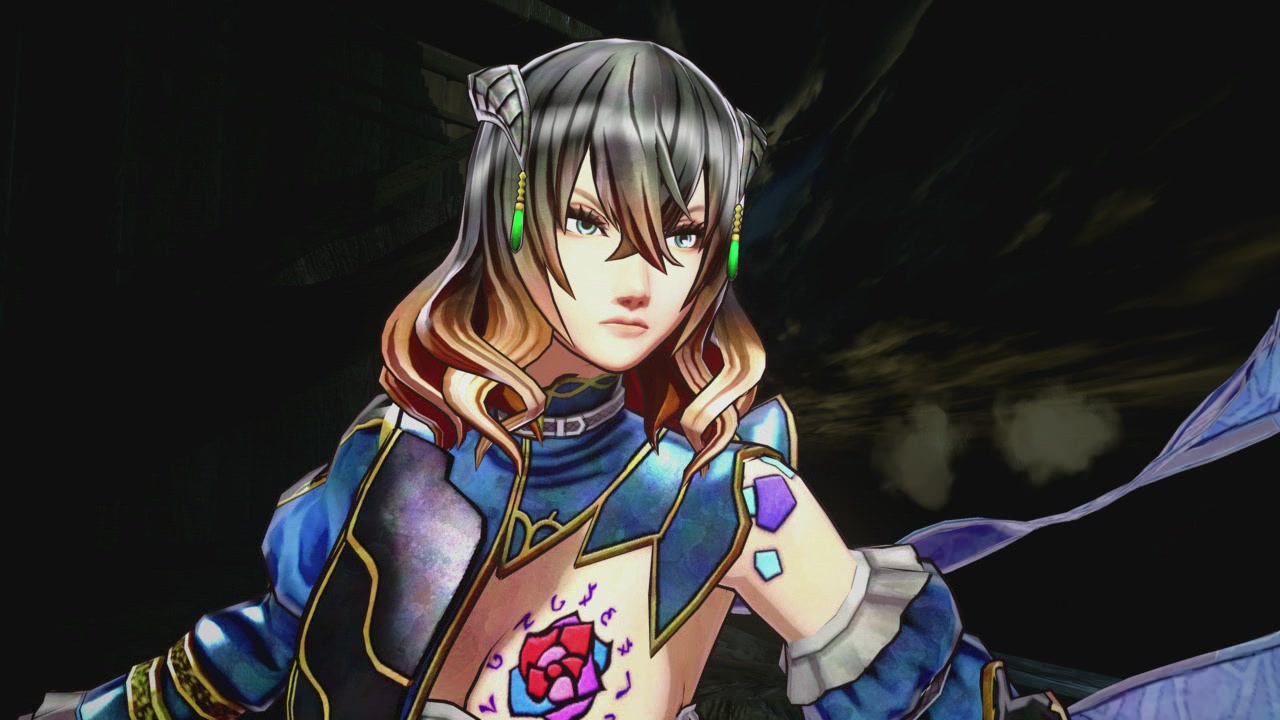 It’s so incredibly hard to watch a dream deferred. Things like Kickstarter have made people embrace lofty ideals and possibilities in gaming like never before, sometimes with heartbreaking results. I don’t think anyone is 100% pleased with how Broken Age was handled (a good overall result), and those poor folks who backed Project Phoenix might never see a finished project at this rate. But Kickstarter and other crowdfunding platforms offer hope: the glimmering chance that something you once loved might be able to live again. When Koji Igarashi took to the Internet back in 2015, he said to fans: “Do you want to see a real Castlevania sequel?” The response was a record shattering yes, and, until Shenmue ruined it all a few months later, Iga’s dream was the top ranking video game crowdfund of the time. Yet it took time. It took so much time, and so many things changed in that time. There was more to add for stretch goals. There were additional voices to cast and animations to flush out. And, naturally, there was changing hardware to deal with. Despite the failing hardware sales, no one anticipated that Nintendo would have axed the WiiU so quietly, leaving promised ports suddenly dangerously irrelevant. So changing over to the Switch took more time, and, as we can see, it took a bit of a toll on the quality. Still, after a long, long wait, fans can finally get their hands on the real spiritual sequel to Castlevania. This is Bloodstained: Ritual of the Night.

Bloodstained takes place in a 19th century township that has suffered much over a short period of time. Demons burst forth on the landscape, threatening to destroy everyone, and the Alchemist Guild, turning a blind eye to God, developed a process to create sacrifices to fight back against the demons. These were known as Shardbinders: formerly human subjects who were infused with demonic spirit crystals. This turned out to be successful, but at a heavy cost, with only two Shardbinders surviving the ritual. One, Miriam, was immediately placed into a deep slumber to try and slow down the catastrophic effect the crystals would have on her body long term (subjects would eventually become totally crystalized). The other was Gebel, who should have died but didn’t, and apparently went mad with unjust rage from the entire ordeal. He has now raised a demonic castle, known as HellHold, and is ready to wage war against humanity. Miriam, with the aid of Johannes (an Alchemist), Dominique (an exorcist) and several other characters, must break into the HellHold, subdue Gebel, and ensure that the blood red moon does not set upon a destroyed landscape.

Castlevania is literally the latter part of the portmanteau of metrovania, so the gameplay should come as no surprise to anyone. The main idea is to explore the castle, preferably blind (there are already several guides out there) and discover all the necessary doors, keys, secrets and traps that are strewn about. Miriam is a tough, strong character, trained in virtually every weapon under the sun and ready to kick some butt and save humanity, even at the cost of her own life. The few surviving townsfolk outside of HellHold have set up several stations for her, including a shop to buy and sell equipment/ingredients (oh boy, there’s cooking), and alchemical circle for creating and infusing items, and a series of quests to reward you for your intrepidness. There is absolutely no straightforward way to get from point A to point B: in fact, if you are successful in getting through one run (and get the good ending), you unlock new game plus, which creates a lot of carry over to ensure faster, stronger and more bananas runs each and every time. Bloodstained is going to be one of those games where people are going to see just how freaking overpowered they can get while simultaneously memorizing the locations of items and bare minimum needed visits in order to get the ending, and I can’t wait to see livestreams of this for charity in the future. 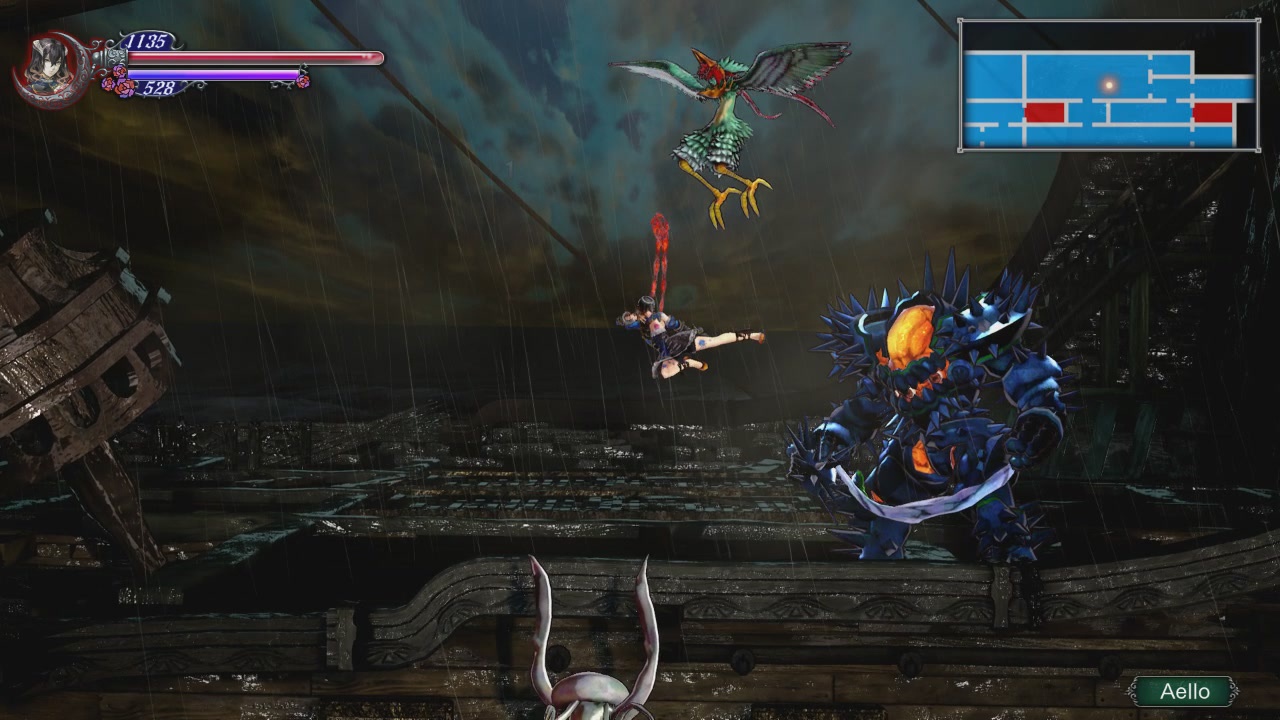 One thing that really stands out to me is that Bloodstained is a LOT. Like, if there’s a box to be checked, there’s a lot of it in this game. Tons of equipment. In numerous pickups with applications. A huge number of demon shards, which act as magical elements for Miriam and also mark her ever-approaching death. And the castle…hop boy. If you’ve only ever played some of the NES Castlevania games, or just haven’t done a deep dive into huge exploration games, then you can easily and quickly get overwhelmed, or worse, bored. Getting into HellHold from the very beginning means walking room after room of varied ideas and elements, from enemies and traps to surprisingly benign and calm moments of visual joy. There is a fast travel system to certain waypoints within the castle, but you gotta walk for a while in order to get there, and traverse many, many iterations of bad guys attempting to shoot, stab, flay, smash, explode, poison or generally gut you in the process. Save points work as ways to both keep your progress going and also to refill your HP, and to also remind you how very, very important saving is. If you die between saves, there’s no autospawn or saving throw, just the game over screen and needing to return to the last time you remembered to stop into those crucial red rooms.

As a result of the sheer amount of the game, the learning curve is varied, adjustable, and rather intense. Bloodstained lets you know that Miriam is a jill-of-all-trades, and she will pick up a knife, a great sword, a katana, an axe, a gun, or just kick the hell out of you with a series of fashionable boots. Thanks to the different types of shards that are randomly dropped by enemies (another great replay effect: trying to get shards from every single monster, get a crazy powerful accessory), you can totally customize your approach to enemies based off of your playstyle. Pick off demons from a distance with your blunderbuss, breaking out the big rounds to deal with particularly insufferable imps. Wield a greatsword and smash the hell out of anything in striking distance, empowering your abilities with the right passive shards and using other magic slots to summon literal flocks of bats to annoy enemies to death. Best of all, Miriam’s appearance chances in only two distinct ways: different weapons (natch) and different fabulous hats). You get to ditch your iconic head horns almost immediately for a massive, floppy hat that has better defense stats, but don’t worry: you can get a pirate hat just a little while later. I love games that make me choose between style and function, and Bloodstained has this in spades.

Additionally, even though the graphics have to be scaled down for the Nintendo Switch, Bloodstained: Ritual of the Night still looks and SOUNDS fantastic all the way through. The Gothic art style infused with bursts of color and decay really suit the atmosphere of the game, reminding the player that this is Castlevania adjacent, and not the total sequel. Miriam’s decor is so flashy at times, especially when you get a close up portrait and realize the sheer number of tattoos she has (part of the Sharbinder ritual), and every character goes through a series of voice over battles to add personality between rooms and cutscenes. The music does capture that same dark feeling of adventure and grim determination, sweeping you between different sections of the castle with the appropriate ambiance (I did so love the Garden of Silence). When you enter into that first fight with Zangetsu and the tension fills the air, it’s done effortlessly, bringing a deeply missed sensation that only Yamane Michiru could help bring back from the golden ages. The game absolutely soars, and the gameplay, overall, is fantastically fun. 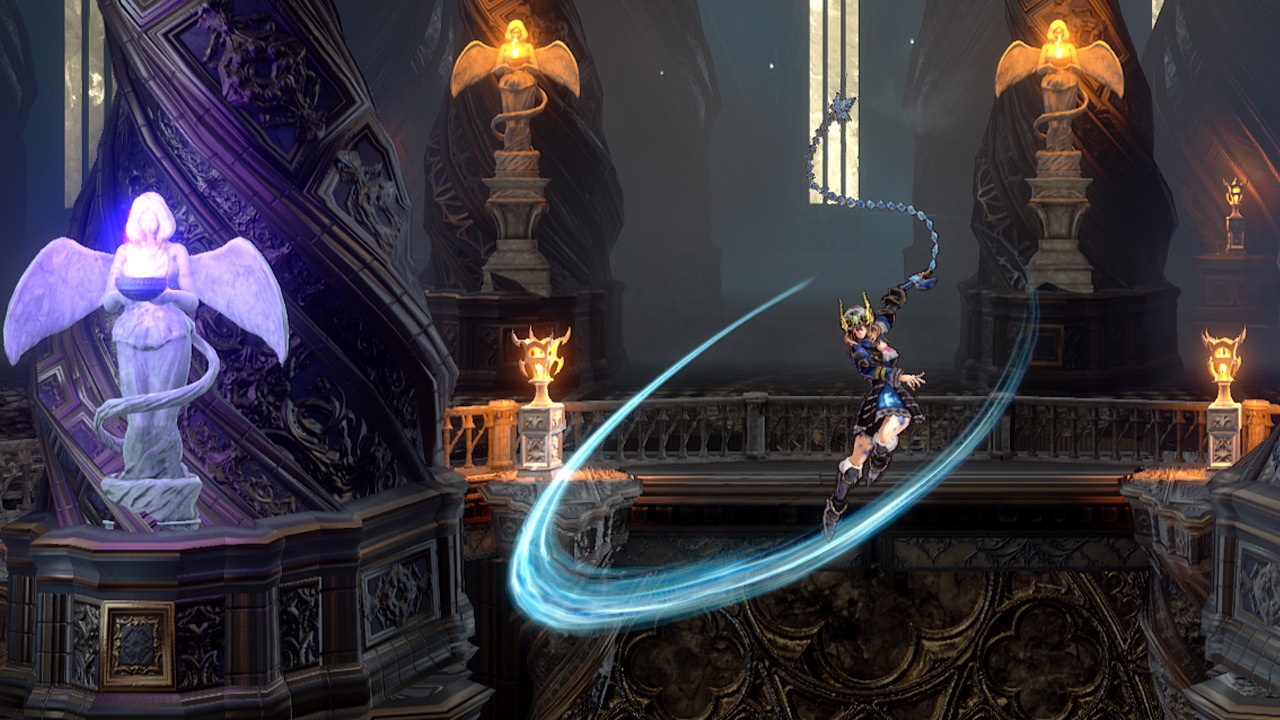 The issue, sadly, comes with the Switch port. I know, it’s a bitter irony, but it seems Nintendo’s version of Bloodstained runs the worst out there, and it’s very visible and noticeable. The frame rate is shockingly poor, making the game seem choppy and stilted at times, forcing Miriam to move at this lock-kneed pace. The load times aren’t unbearable, but they are unpredictable and often ill placed. Several times you need to jump between rooms, and the game will decide then is the time to load, and you’ll miss the platform you need to reach, causing you to return to the previous room (more loading) and then try again (still more loading). I’ve been using JoyCons exclusively and I still feel like there are latency issues, which wouldn’t matter so much in the beginning but become a big deal later on. Miriam gets these awesome techniques for different weapon types that she discovers on the bookshelves, but I only was able to execute a couple very simple ones because I couldn’t link the others together fast enough, and I don’t feel like it was my playing ability. These moments disheartened me, so, even though WayForward and Artplay are currently working on improving the Switch version, it still just disappoints me that this is how the game was launched.

Still, Bloodstained: Ritual of the Night is a seriously fantastic game. There’s so much to it, so many places to explore and things to find, so much potential and the promise of Zangetsu as a DLC player in the future makes my heart hum. This is, hand to book, the game that Iga wanted to make, and it looks the part, it genuinely does. When the game comes together and plays well, it’s an absolute joy. When I can’t make a goddamn jump or the HD rumble needed to be turned off in the first five minutes because IT WOULDN’T STOP PULSING, that was a sore spot. With patches, I’m positive that Bloodstained can get up and become the award-winning game it deserves to be. However, at this stage of life, only die-hard Sword and Whip hunters should pick it up, but let’s be honest: you probably backed the damn thing and are playing right now. So, newcomers, ask yourself: are you prepared to wait for a good game to become great?

Bloodstained: Ritual of the Night Review

A beautiful, expansive game, Bloodstained gives patient fans the Castlevania jewel they always wanted, but, for Switch users, it seems the crystal is flawed.