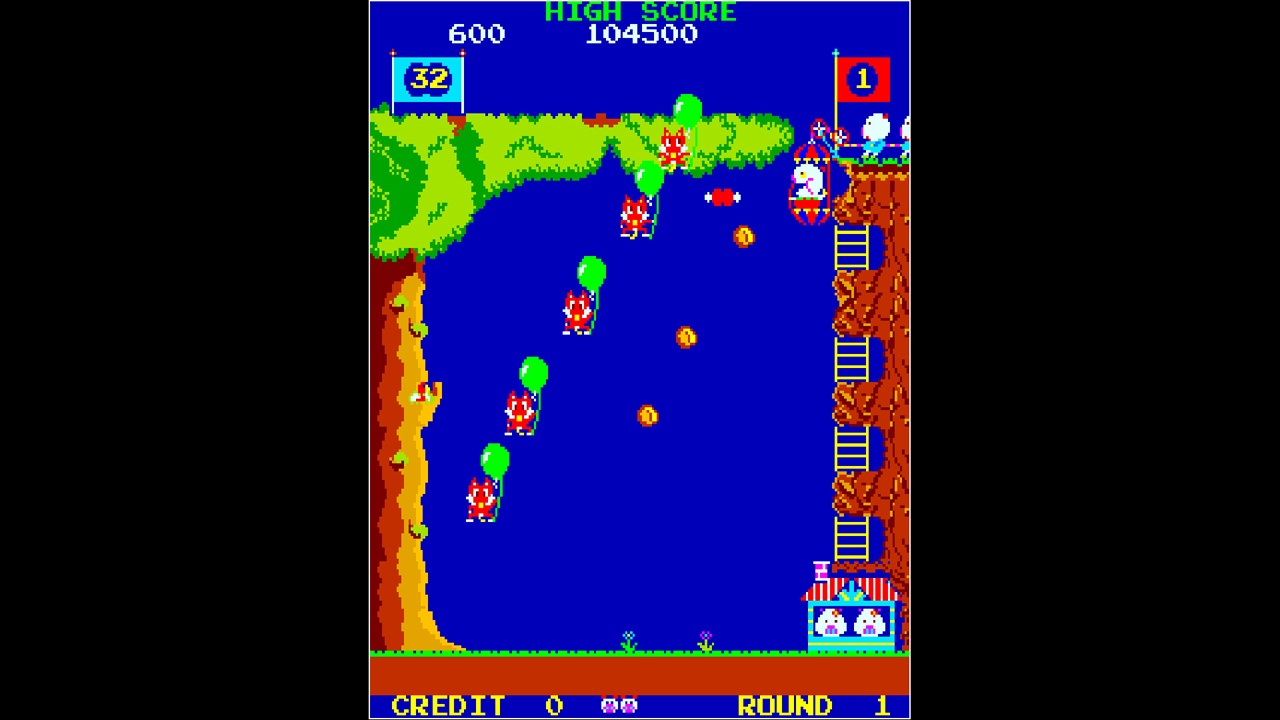 Arcade games sometimes leave ghosts of memories in our minds years after we’ve played them. To date, even though I’ve put hands on over 100 pinball tables, I still have the fondest memories of the World Cup soccer table because it was one of the first I did well at. Sitting in a rest station somewhere in West Virginia, waiting for a tow truck to drag us back to the nearest garage, I had a dollar’s worth of quarters and no apparent rush to get anywhere else, and I learned that table. Sort of like how I learned to do well in Kabuki Fighter, or learned the right time to jump and spin in Uniracer. Time and circumstance make strange games our bread and butter. So when I fired up POOYAN and realized that I had played this once upon a time, it was a nostalgic surprise that was pretty damn welcome.

POOYAN is an arcade classic from Konami with a weird little premise of wolves and pigs. I suppose it’s meant to be a take on the classic story of the Three Little Pigs, but like everything when run through a video game filter, it’s a bit weirder. You’re mama pig, and wolves are coming to take your baby piglets. But the wolves are insisting on traveling by balloon instead of just running at you and overpowering you. As a result, mama pig gets to use this nifty little contraption that’s like a single person cable car and travel up and down to shoot the balloons and cause the wolves to plummet to their deaths. Missing wolves means danger for everyone: in the first wave, wolves that make it to the ground successfully get to eat the piglets. In the second wave, wolves are queuing up to push a rock off a cliff and crush you, and they need a magic number to move that boulder. Thankfully, you have an unlimited number of arrows that travel in damn straight lines, and, on occasion and in the infamous third wave, hunks of meat that travel in a strange arc but can hit multiple wolves. 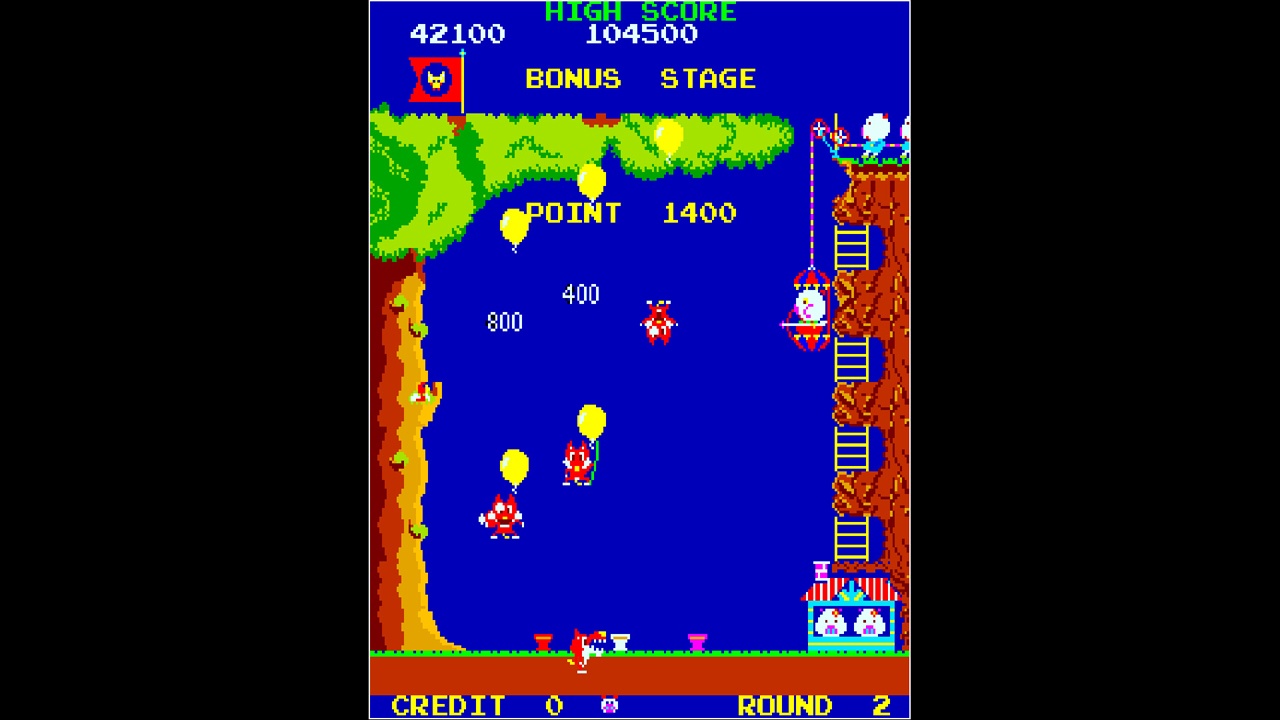 Much like some of the other Arcade Archives (particularly Alpine Ski), there isn’t an end to POOYAN. You play, you pass three levels, and then it starts over again, but with an increasing difficulty. This is one of those moments that can really make enjoyment or connection for newer players interesting, because we have been absolutely spoiled with great storytelling and dynamic environments for a couple of decades now. Why is the pig shooting the wolves? To survive! Why won’t the wolves stop? Pork is delicious! How can any of these technologies be in the hands of these animals, and what prevents the wolves from walking in a straight line instead of doing balloon parachuting to get prey? Shut up! It’s a test of skill, will and patience as you begin to understand that the only ending is death, straight up. Games from yesteryear were kind of depressing, in that aspect, but I suppose there was a bit of a resigned acceptance to these ideas. Games were an escape, but even escapes have endings, and not always the ones you want. We’re getting off track, but the point is that you are in for a real “arcade” experience and not necessarily a gaming experience.

One thing that’s really interesting about POOYAN is the use and execution of hit boxes, something that didn’t really seem as apparent in many games from the 80s. For many titles at the time, if you hit the picture of the thing in any way, it counted as a hit. For POOYAN, however, there were parameters and certain criteria that could be met and avoided. You can shoot the damn wolves in the face with arrows all the livelong day, but, unless you hit the balloon itself, it just kept coming for you. The second stage introduces balloons that change shape, speed and size upon being hit, creating a complex replay iteration that asks you to work on precision as quickly as possible, as other wolf bodies can be shields for their fellows’ balloons. And it works in reverse, as well: the capsule car that mama pig travels in is protected on the top and bottom and can deflect the energy fireballs that the wolves shoot. The AI needs to be as lucky as you are in order to make the shot between the metal carapace and hit mama pig, which is a one shot, single hit death for you.  It’s also what makes the replay elements so interesting: speeding up the wolves and increasing their shot frequency/speed means getting into the groove of being able to lead your shots, figuring out where someone will be in a second instead of where they are right now. 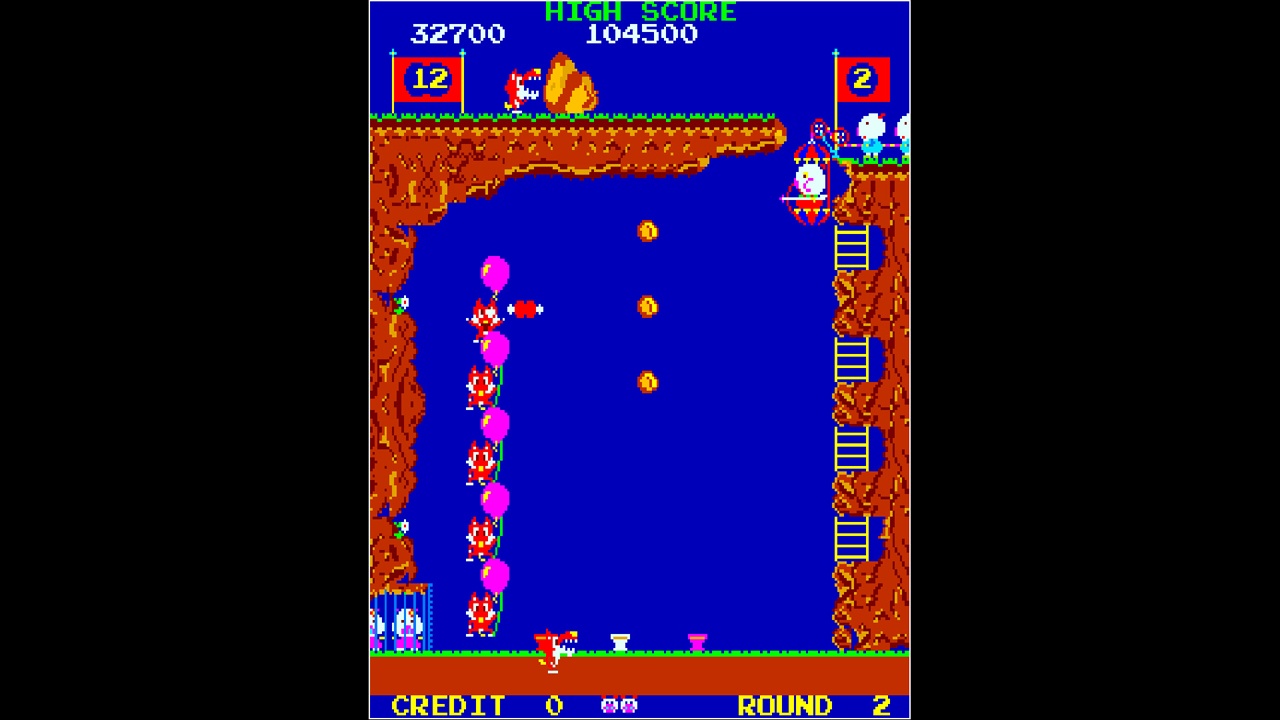 The graphics for POOYAN are nothing to write home about, but they serve for a cartoonish, blocky pixel presentation of what adds up to little more than a fractured fairy tale. You know what the wolves are, you know what the pigs are, and you can see the different colors of the balloons, the meat that you throw (and, later, fruit), and the slow movement of a boulder that wolves are looking to drop upon you. This actually leads to some interesting thinking in which I believe Konami could make a quick buck by re-releasing POOYAN with some updated sprites, some updated music (it’s very tinny and very, very repetitive), and keep the gameplay style intact. We don’t even need something where we add special powers or a real story, but a remake of this title that isn’t just a pirated NES cart would be dope. It’s fun enough, it has the right chops for arcade nostalgia, and it could work well on the Switch and, well, any other system.

If you’re also a fan of this game from your childhood, picking up POOYAN is a fun, fast, and short lived enjoyment that can be revisited again and again. The high scores on the Caravan mode aren’t super high right now, so someone better than I could probably grab the top spot with relative ease (I’m already onto the next game, what can I say). If you’re looking for in-depth, complex and story rich gameplay, you came to the wrong house, but, otherwise, there’s plenty of quick gaming to be had, and that’s sometimes good enough.

POOYAN is a short but quirky look back into what constituted a serous arcade contender back in the day.