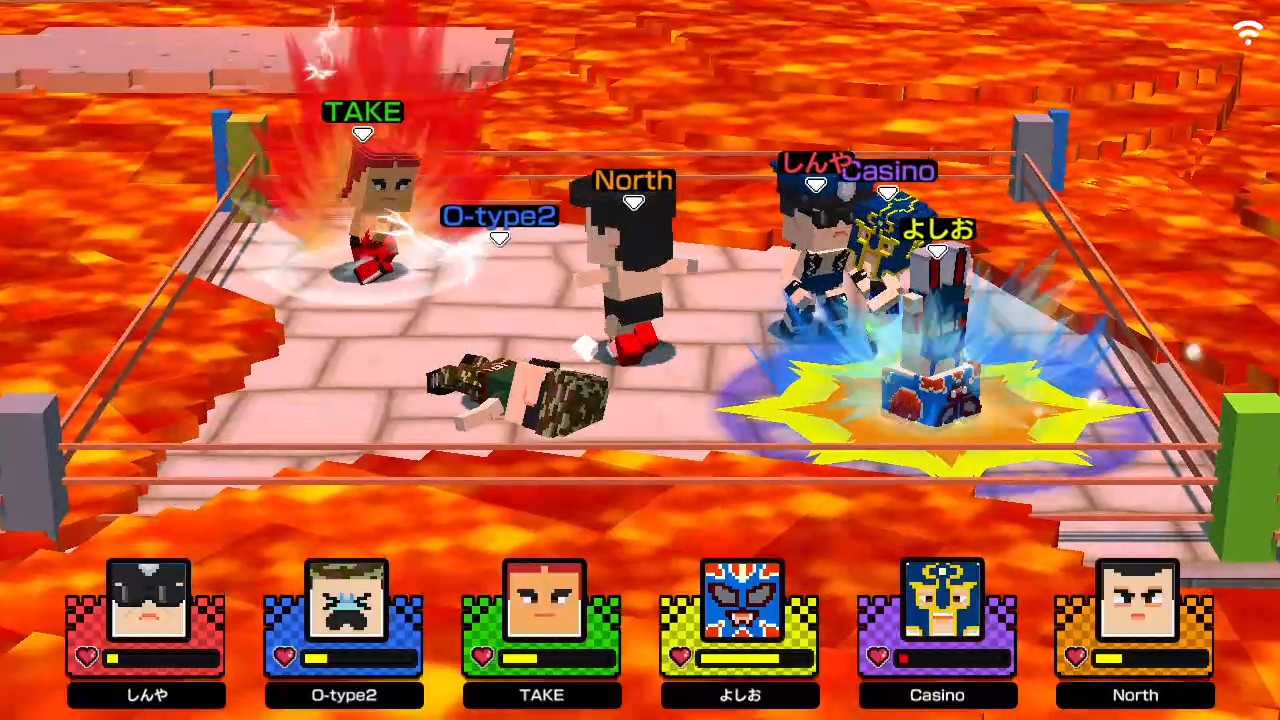 Chiki-Chiki Boxy Pro Wrestling, despite the name, isn’t reeaaally a pro-wrestling game. It’s definitely boxy, and I’m fairly certain that if I knew what ‘Chiki-Chiki‘ meant it would probably be that too, but it’s much more of a brawler – a sort of 2.8ish-D fighter, which is to say very slightly more 3D-like than something like Double Dragon or Turtles in Time – than it is an actual wrestling title. That said, it’s probably still somehow a more fun wrestling game than some of the entries in the WWE 2K franchise.

Playing Chiki-Chiki Boxy Pro Wrestling should feel fairly familiar to veterans of arcade-style fighters. You take control of a box-headed pugilist with access to a decent little array of combat techniques: Chiki-Chiki Boxy Pro Wrestling can be played using just one Joy-Con, with the limited number of buttons that control scheme offers, and you’ll still be able to pull off a good dozen or so separate attacks. You’ve got a basic attack, a special attack, and a grapple from which different manoeuvres can be executed; moving while attacking might alter the sort of move your fighter unleashes, as might holding the button down or standing near a different body part when your opponent’s grounded.

You’ll start out with a couple of fairly generic wrestlers unlocked – more will be added to your roster as you progress through the single-player ‘Grand Slam’ mode, along with new customisable body parts and fighting moves for you to add to your own created fighters. This single-player tournament structure is the closest thing to a narrative, but it’s not really much of a story to speak of; arguably, Chiki-Chiki Boxy Pro Wrestling tells pretty much the same story as something like Super Punch-Out!, chronicling a warrior’s rise from rookie circuit to world champion, but this is mitigated somewhat by the fact that you can quite happily change your fighter mid-tournament with no ill effect, so it’s less the story of a Little Mac-style meteoric success and more the loose history of a bunch of tournaments with occasionally overlapping participants. 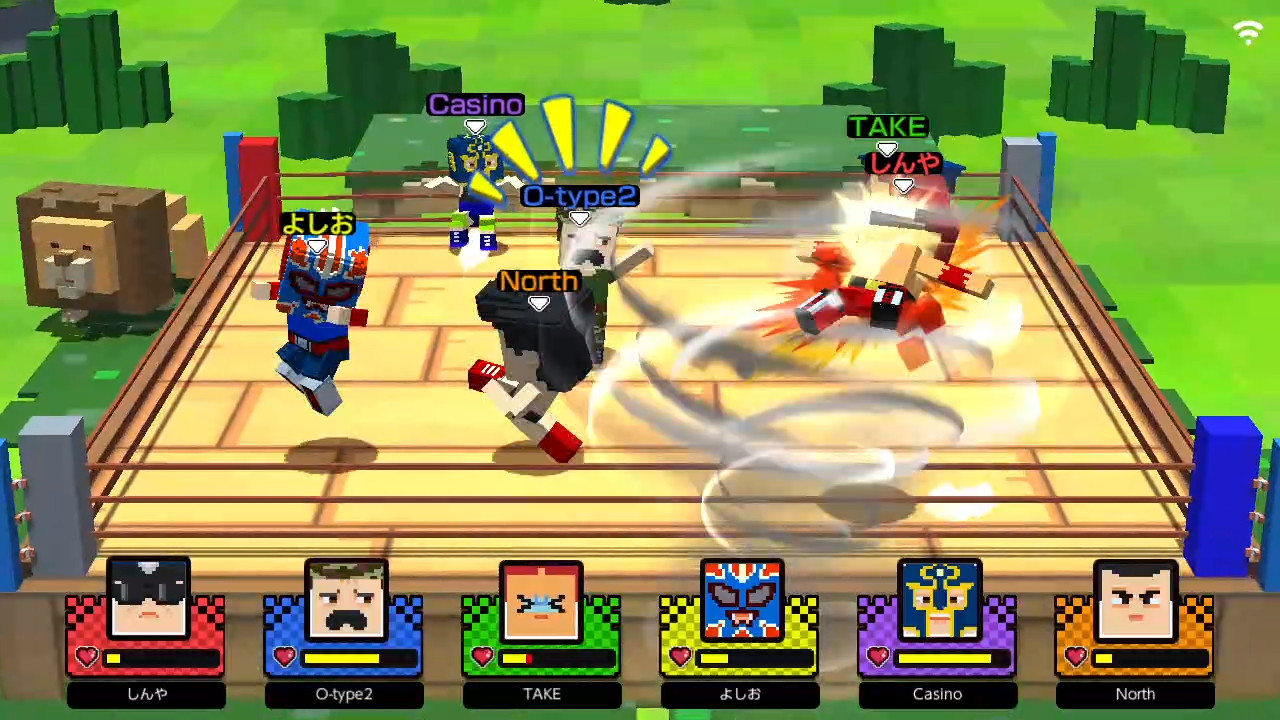 That said, there is what feels like something of a progression as you work your way through the Grand Slam, defeating CPU-controlled opponents. You’ll take part in different match types – one-on-one bouts, tag team trials, triple threat terrors, and what the game calls ‘battle royal’ matches but which are really just four-way elimination matches (there’s no throwing people over the top rope for victory, sadly) – across a variety of arenas, with rings set in a small rotation of fun locations. There’s a ‘nature zone’, where animals outside the ring might occasionally bring powerups or do some damage to a wrestler who finds themselves in a lion’s path, the classic wrestling hall, and (perhaps my favourite) a volcano stage with lava that gradually encroaches on the ring during the course of the match, giving wrestlers a smaller safe area in which to face off.

Matches tend to be quick, with each combatant only able to take a relatively low number of hits before running out of HP. Unlike most wrestling games, bouts don’t have to be ended by pinfall or submission: there are no submission victories, in fact (although there are a few submission moves), and ending a fight by pinning your opponent is an optional thing, granting a few extra coins to put towards character creation.

It took me a while to get to grips with the finer points of gameplay, not that any of the points are particularly fine (appropriately, boxy isn’t a bad word for how it feels to play at times); there’s a fairly well-done tutorial against an opponent who won’t fight back, allowing you to really try out everything at your disposal until you feel comfortable unleashing all the moves in your playbook, but things are very different when you’re against an opponent who’s actually running around and doing their best to confound your efforts to kick them in the face. (It’s an understandable thing for them to do, I suppose, but frustrating nonetheless.) I must have lost a good four or five bouts without doing any real damage before the rhythm of things began to set in and I started to get the hang of things. Fortunately, four or five bouts only took a couple of minutes to lose, so it doesn’t feel like a hugely steep learning curve so much as a game that requires a bit of a feel for the timing: when to attack, when to get out of the way, when a special move is worth risking, all those good things. It’s slightly idiosyncratic, I think, but that’s not a flaw as such.

Something I have mixed feelings about is the fact that each fighter (whether computer-created or of your own devising) controls in exactly the same way. They’ve got slightly different stat ratios (each has a metre for power, health, and speed) and they use techniques that look different visually, but in functional terms there’s no real difference. For example, pressing the grapple button followed by multi-tapping one of the attack buttons will always unleash a throw or hold – the configuration of the controls doesn’t change between characters, even if the animations are altered. On one hand, this makes it very easy to switch characters as you like without having to relearn anything; on the other, part of the allure of fighting games, especially those with larger rosters, is often learning the unique ins and outs of how each character plays, including new techniques or combos requiring different button inputs. 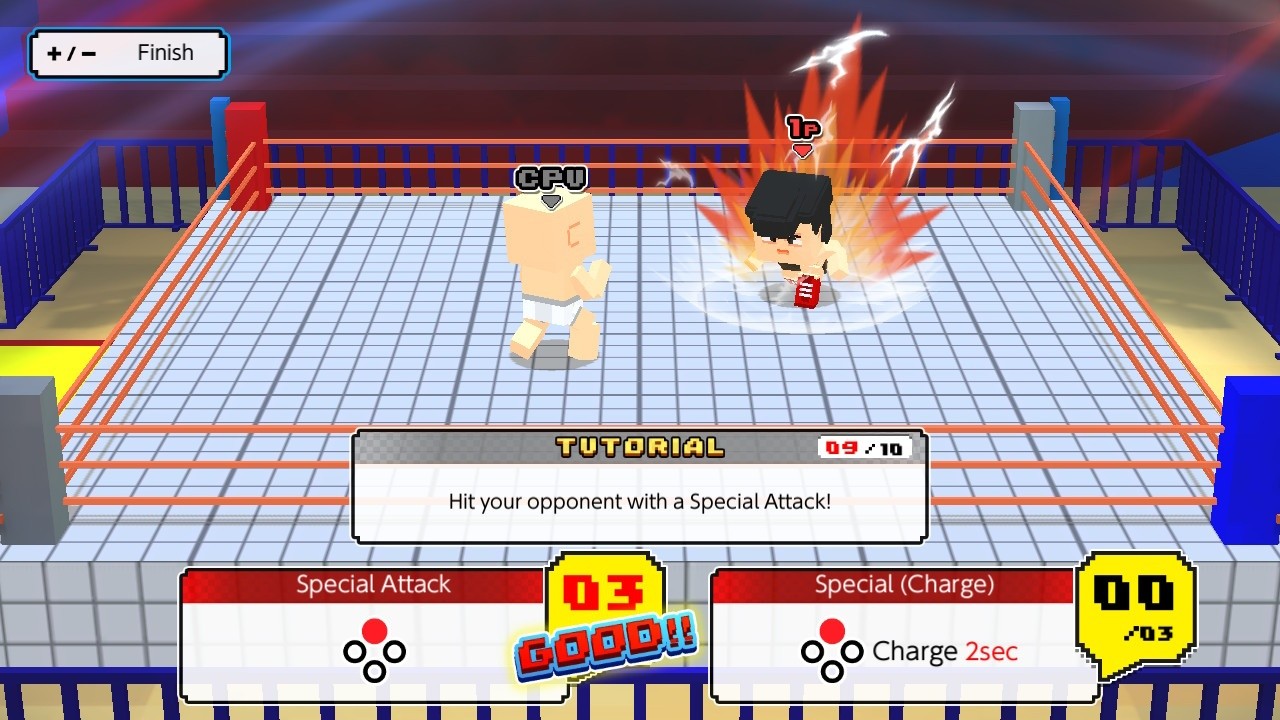 I think, overall, Chiki-Chiki Boxy Pro Wrestling works best as a party game in the vein of Overcooked! or something like that. It’s no spectacular experience as a single player, but there’s certainly a lot of fun to be had with four or six players all in the same ring together via local or online multiplayer: things get a lot more chaotic and a fair bit more amusing, although it can be frustrating trying to deal with the sometimes janky way Chiki-Chiki deals with hitboxes and i-frames (you do have to get quite close and at the right angle to land a hit, but anyone who’s either dishing out or receiving a grapple or hold will be invincible until the move’s over, at which point they’ll probably just go straight into another one).

I kind of wish there were a few more game modes, actually. It feels as if the engine would lend itself quite neatly to some platforming or side-scrolling-beat-’em-up minigames, which could add more meat to the party-game experience I think Chiki-Chiki Boxy Pro Wrestling is probably most suited to – or perhaps even a simulation element in the vein of old WWE games’ General Manager mode or modern popular wrestling sims such as Total Extreme Wrestling or Extreme Warfare Revenge, although that would feel quite off-brand for the kitschy, cutesy feel the game cultivates elsewhere. As it is, all you can really do is have one wrestling match at a time.