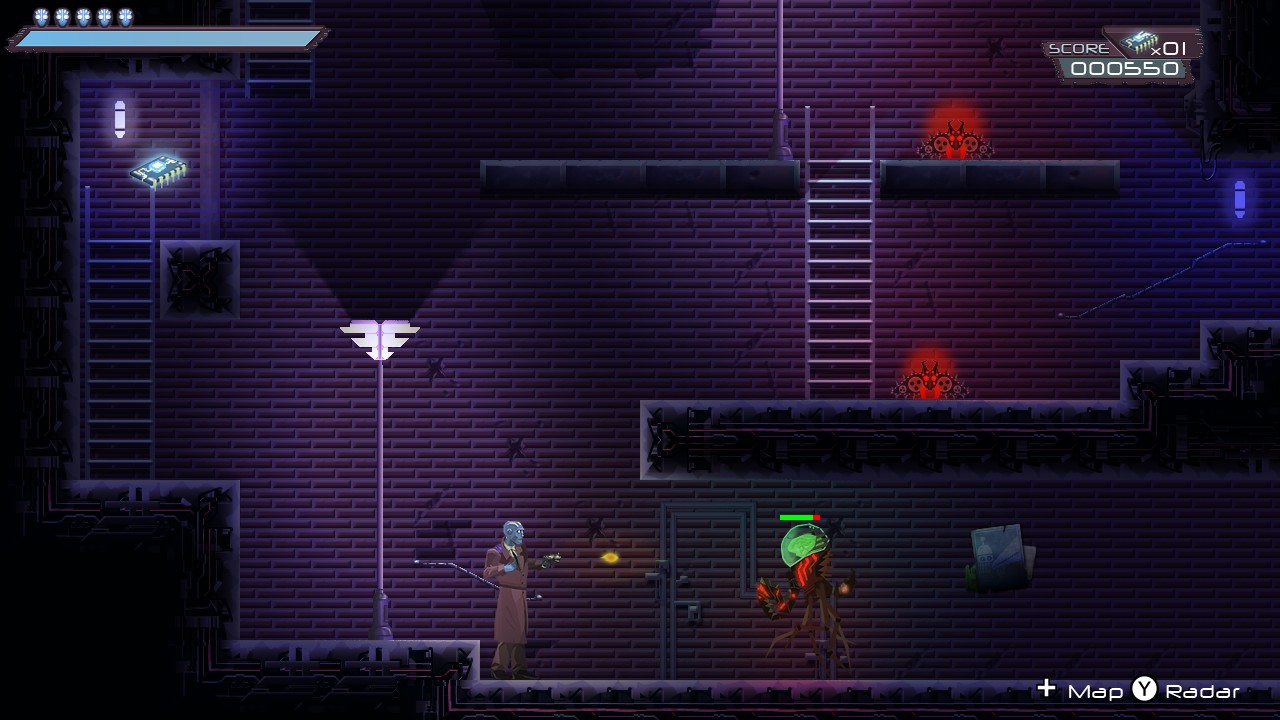 Too often, homages to old school gaming decide to really pick and choose exactly what it is they loved about the classics and then try to incorporate the wrong elements in order to make a full game. There were drawbacks and caveats to systems like the MSX, the NES and even the Atari 2600, and they’re often overlooked when we slap on pixel graphics and chiptune soundtrack. What really made those games pop was their ability to capture the imaginations of players and make them work in ways that were weird, wonderful and groundbreaking. Joust, for example, is one of the simplest, ugliest games out there, but semi-flying ostrich fighting was something that everyone and their mother got on-board with when the game was hot. It’s that sort of innovation and strange thinking that I believe OXiAB brought to the table with their updated, true-to-form version of the classic BitLogic – A Cyberpunk Arcade Adventure.

The premise of BitLogic is intentionally meta, but don’t let that put you off right away. You are a player, interfacing with a new type of software and seeing what can be provided for you in this gaming environment. Your avatar is a character named Bit, who sees you as the Player, or someone who will delegate where he goes, what he does and how he’ll succeed in that field. Your purpose in the “game” isn’t entirely clear, at first: you are dropped into a world, and you immediately need to shoot something so that it doesn’t kill Bit. As time goes on, and you collect items and work out simple puzzles, it becomes increasingly apparent that Bit has questions and curiosities about existence, both yours and his. By and by, the tone and concept of BitLogic changes and it becomes less about the adventure and far more about the awakening. 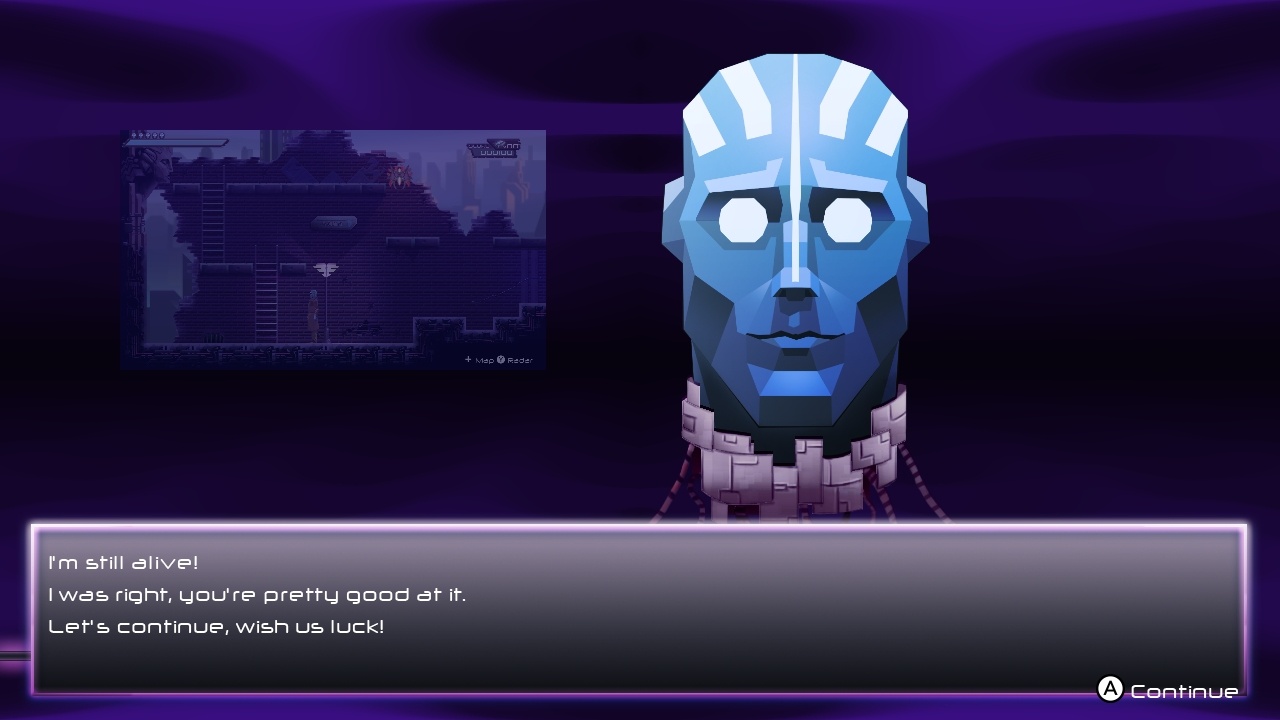 As the original game was created on the MSX (and you have the choice to play the “original” version right away, should you choose), there were certain limitations and constraints that still exist in the current version of the game. For example, you’re totally unable to jump, something that Bit addresses right away with a bit of tongue-in-cheek humor. The result of this is a lot of labyrinthian exploration that requires you to track and backtrack in order to reach certain items and spots that you might sight early on. It immediately adds to the challenge of the overall game, as there’s a lot of potential for you to take extra efforts to reach one location only to realize it holds nothing but disappointment for you. Additionally, Bit cannot duck, and this becomes relevant with certain enemies that travel on the ground or otherwise bounce around. You need to angle yourself just right to use your unlimited ammunition to take out pests and would-be dangers, and also know which of the enemies are going to come back to life IMMEDIATELY after being killed (hint: the large ones that don’t disappear when you shoot them are coming back). Also, falling won’t kill you or damage you, but it will create a moment of stun in which Bit could easily be attacked, so be aware.

Collecting the microchips that are scattered throughout the world act as the keys to both the gameplay progression of BitLogic as well as the story progression. The map is littered with checkpoints that ask you to have a certain number of collected items before you’re allowed to progress, so a rule of thumb is to grab every single one that you can access. While it might seem like an obvious thing to point out, we’ve gotten used to certain games where collectibles are fun and helpful, but not necessary, and passing over items rarely gives you massive penalties. Not so in BitLogic: collection is the name of the game and the key to survival. Thankfully, everything can work out in the end, and there’s no such thing as a wasted moment in this wonderfully short game. And I do mean short: you could easily finish your first play through in under an hour.

If all you did was run and gun in BitLogic, it would be a waste of time and money for all parties concerned. However, the reason that OXiAB wanted to bring this title back to life nowadays is the fascinating approach to storytelling and the tale that unfolds for the player. Bit will, at certain points, stop the adventure to communicate with you and ask questions about life, existence, and perspective. These questions ultimately shape the way the game moves forward with yours and Bit’s relationship. He blindly accepts what you give him as fact, but less like a computer and more like a child who is making logical associations. Things grow more complicated as Bit seeks to understand the duality of realities, of the digital world and the physical, and how he can exist in both but also not exist. It’s a fascinating development that gradually gains awareness and self, but without any of the grim and nihilistic trappings that often came with the Cyberpunk novellas of the 80s. It’s pretty convenient, actually, that BitLogic is so short because coming back and revisiting the game is incredibly worthwhile. Bit shows he remembers you, greets you with more questions, and you feel like things are actually building towards something. I won’t spoil too much, but for a game of this caliber to have a sort of multi-faceted system on the MSX is mind blowing, and I can’t believe I never heard of this title prior to the re-release. 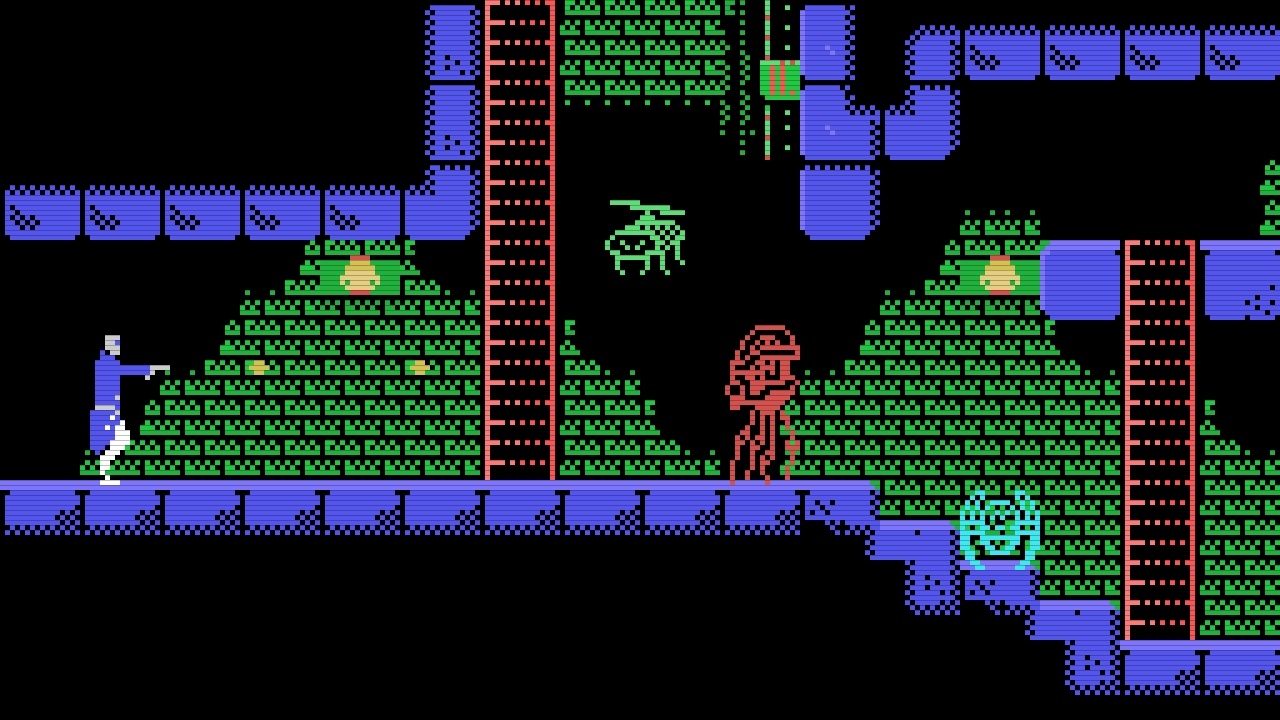 While old school gurus will want to spend a bit of time in the MSX version, please don’t dismiss the improved graphics and soundscape of the new version of BitLogic. Whereas the original was very akin to the angular, minimalist style that was associated with science fiction games of the time, the new version uses a great combination of muted color tones, vibrant neons and a sort of CGI-overlay to present the game in a dramatic new fashion. To be honest, Bit looks like he would have been at home in the world of Mainframe from the television show Reboot, and I think that’s one of the most fascinating animations from the 90s. Additionally, the gritty soundtrack is improved and amplified in the newer version, giving more depth and volume to the world in which Bit is trapped and explores, adding to the cyberpunk ambience. It’s absolutely worth the price of admission for the new version, and the MSX is the icing on the cake that every player should take a spin with (it does feel more difficult due to the appearance, but I don’t think it’s that dissimilar).

BitLogic was a shock and a surprise of the positive nature, and it’s instantly become a rotating title on my Switch’s top ten for the purposes of revisiting, trying new answers and seeing how things develop with Bit. At less than the length of an episode of WestWorld, this new flavor of classic cyberpunk is endearing, exciting and indefinitely memorable. As a premium blend of platforming, storytelling and existential exploration. Don’t miss it.

BitLogic uses old school action gaming to trick the players into a rabbit hole of questions and curiosities for one of the biggest surprises in recent memory.