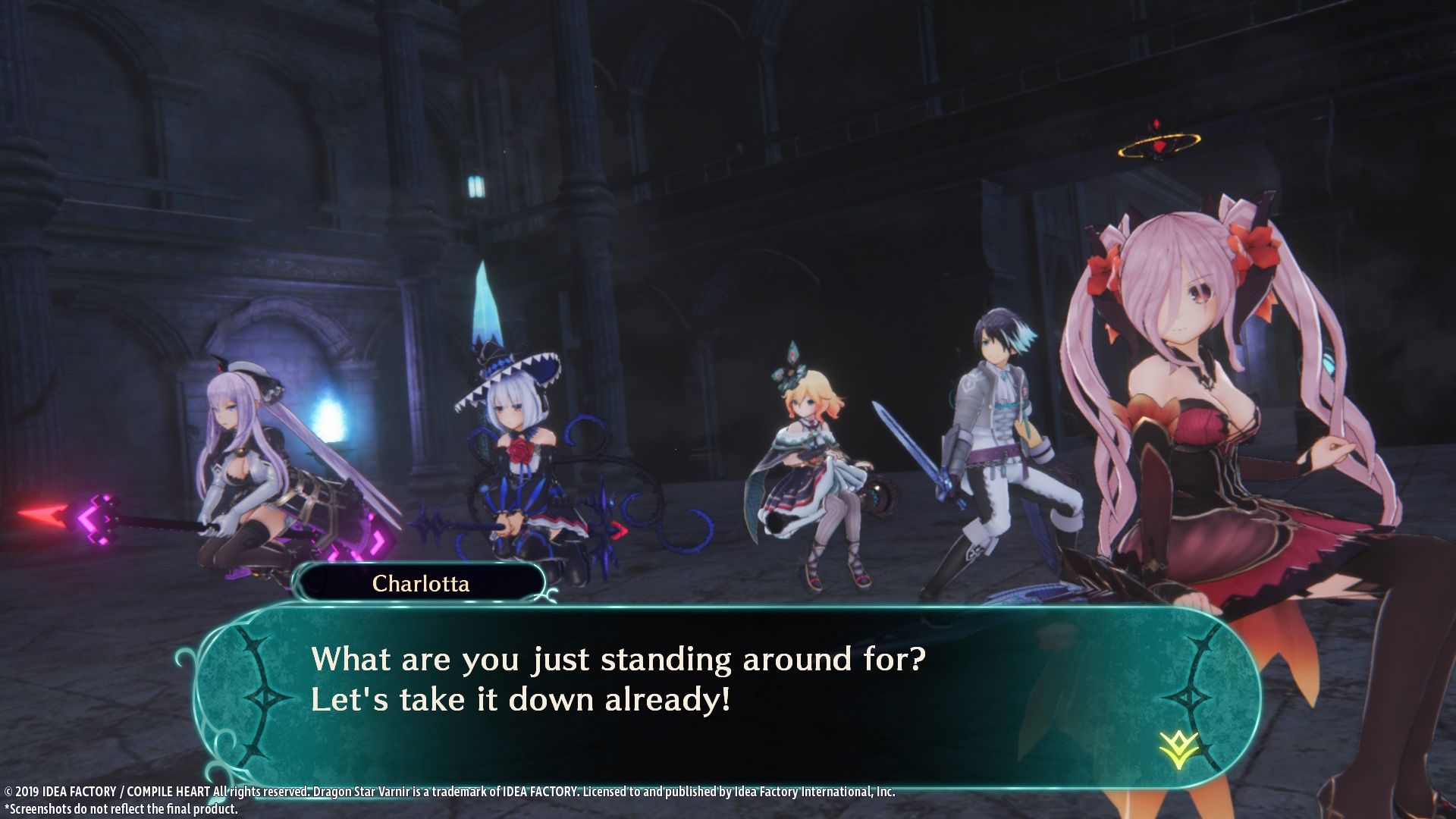 Dragon Star Varnir is the latest game from Idea Factory and Compile Heart. These two companies have become reasonably well known over the years for their popular Hyperdimension Neptunia series, a light, humorous series of turn-based RPGs with beautiful artwork. Dragon Star Varnir marks a change in tone from the usual games that they’ve been putting out, with a much darker story and characters.

In the world of Varnir, witches are mysteriously born with dragon seeds inside them. The witches must consume dragon flesh frequently, otherwise they will fall into madness. Unfortunately, with each chunk of dragon they consume, the seed inside them grows more and more until a dragon finally bursts out from inside them. It’s not pretty. The dragon then goes on a rampage, destroying everything in its path. The game’s story follows Zephy, one of the many knights of the Empire who have been tasked with hunting down and killing both witches and dragons. When a freak accident results in him becoming a witch himself, everything changes as he struggles to come to terms with the fact that he’s now being hunted by his former allies. With nowhere else to turn, he finds himself staying in a witch village. He soon finds himself questioning whether the witches are really the cold blooded threats to humanity that the empire claims they are.

Dragon Star Varnir’s gameplay is broken up into three segments: menus, story scenes, and dungeon exploration. The map screen menu lets you choose the next location you want to explore, and the party menu offers a multitude of options. These include options for changing character equipment, switching around character skills, and modifying your battle formation. The story scenes are plentiful, and take up a large part of the game’s 60 hour length. Accordingly, the story telling is very detailed, and the plot should manage to keep players interested and engaged with its intriguing premise and characters. There’s enough twists and turn within the dark plot to keep you guessing, and there’s even three different endings to see if you feel like putting in the time. Lastly, the dungeon exploration is where the real meat of Dragon Star Varnir’s gameplay comes in. 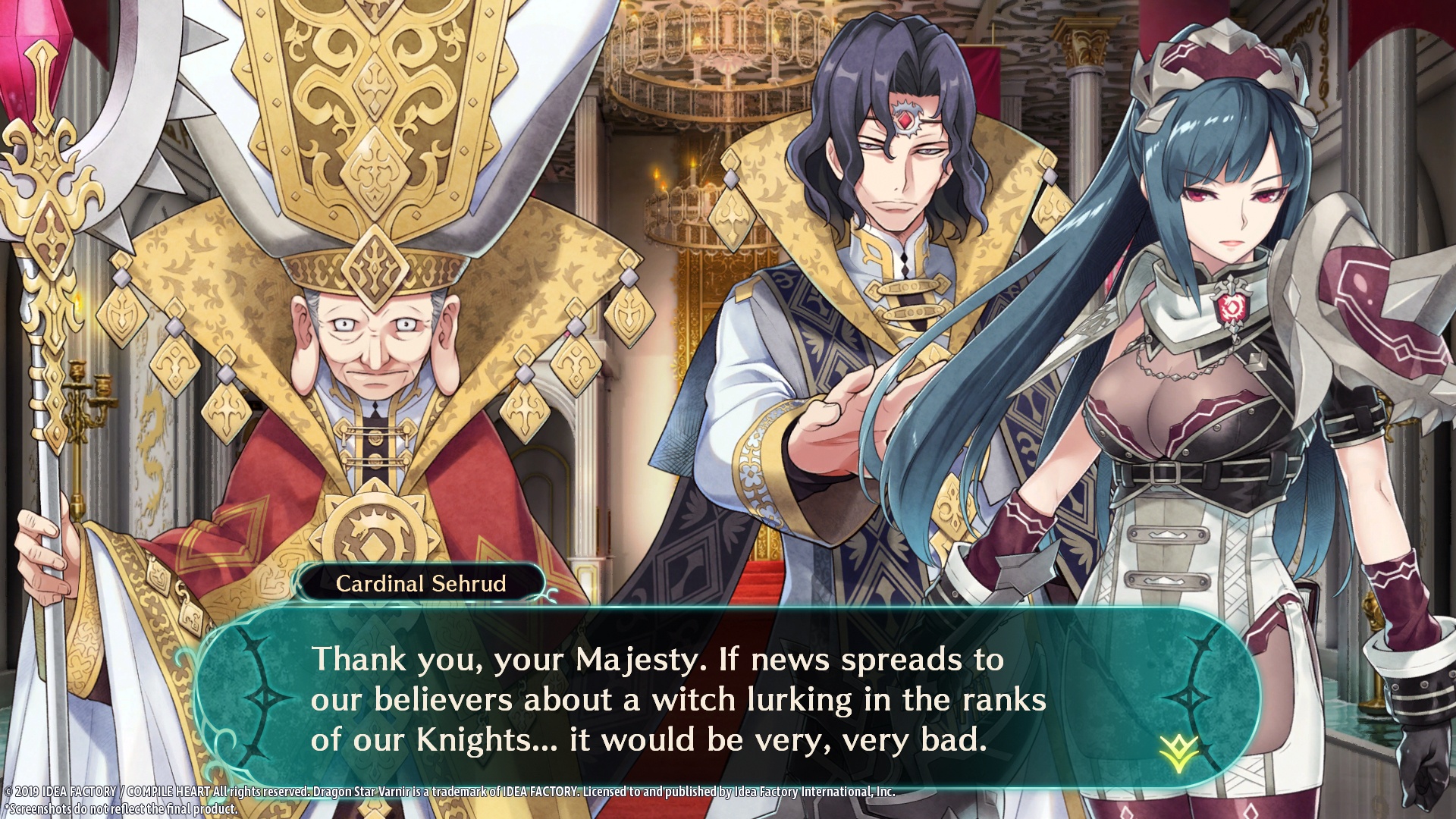 The dungeon exploration has you running through large 3D environments, filled with both enemies and treasure. There’s a wide variety of places to see over the course of the game, ranging from forest to cave. You’re given the option to play as any of the game’s main characters at any time, with players being able to switch between them at any time during exploration by simply tapping the R1 button to cycle through them. As a bonus, each character has their own special ability that can be used in certain places within the dungeons. These include the power to break through barriers, shield against environmental hazards, and quickly escape back to the map screen. Every ability is useful, and it’s great that the developers found a fun way to encourage people to play as each character as they explore. You’ll need to put all of them to good use if you want to see and find everything that a dungeon has to offer, and there’s plenty there. You can even hunt for sneaky invisible treasure chests, which contain all sorts of valuable goodies. You can also make your chosen character fly for short periods of time, allowing you to navigate dungeons quickly.

Dragon Star Varnir’s exploration isn’t all about running around though. Each dungeon is infested with enemies, mostly of the dragon kind. Rather than featuring random battles, the game opts for having enemies be visible and moving around in the environment. If you can manage to get close to them without being spotted, you can perform a first strike attack on them, allowing you to gain an advantage and start the battle with some damage already dealt to the enemies. Dragon Star Varnir’s battles are turn based, and take place in large arenas. Battles take place in the air, with your witch characters flying and moving between three different sections of the arena, each one at a different height. Moving your characters between the different heights can allow you to keep them spaced out and avoid enemies using area of effect attacks on your whole party.

The order of attacks is based on your characters’ speed stat, and on their turn they can choose between three main options, using a physical attack, using a magical attack, or using the Devour command. The first two are self explanatory, but the Devour system is what really sets Dragon Star Varnir apart from other JRPGs. Using the Devour command literally allows you to eat your enemies, killing them and allowing the character that ate them to gain their skills in the process. Eating enemies is the only way for your characters to gain new skills (including new attacks) and its a fun, creative system. Learning new skills requires spending Factor Points, which are gained at the end of each battle. Lowering the enemy’s health is the key to being able to devour them, since the more damage they take, the higher your chance of success. There’s a large number of different enemies to battle and eat in the game, each with their own sets of skills for you to add to your collection. The overall number of skills on offer is quite expansive and varied as a result, so you can really customise your characters to suit your playing style. 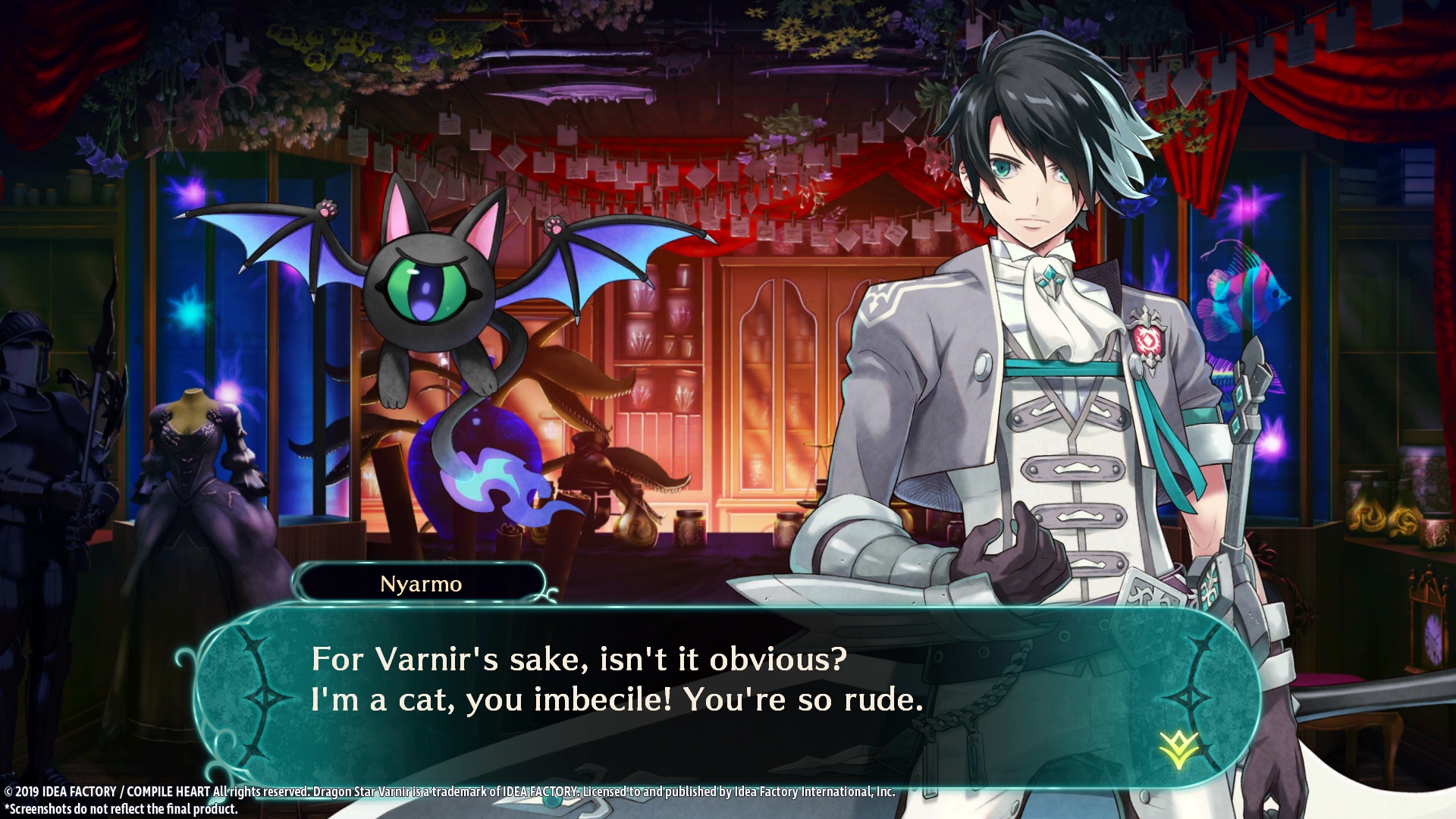 Despite being good fun overall, the battles do have some noticeable balancing issues however. Physical attacks are largely outclassed by magical ones, making them rarely used. Magical attacks consume SP, but your characters have such a large amount of SP that I never ran out of it at any point in the game. The game’s SP recovery items were left untouched. Considering that almost every enemy in the game (including bosses) has an elemental weakness, there’s just no real reason to use physical attacks, which are non-elemental and therefore weaker. They almost feel like an afterthought. Fortunately, some extra strategy is added by the fact that you can only equip five skills of each type (phyiscal, magical, Devour, and passive) at a time, so you need to choose wisely from your pool of skills. On the Normal difficulty, Dragon Star Varnir’s battles are just challenging enough to keep players on their toes, although there is a small difficulty spike late in the game that may catch some players off guard. There are also many side quests that can be worked on as you explore, which are then reported back to a witch located in the game’s main menu hub when completed. She’ll give you some very useful goodies in return.

Dragon Star Varnir’s graphics are a bit of a mixed bag. Starting with the positives, the story scenes look great, with high quality, animated character portraits being used. These have become a hallmark of Idea Factory’s game, and they’re always a treat. The characters breathe, blink, and even move slightly as you read the text. The gameplay graphics aren’t as hot though. The 3D character and enemy models look fairly nice and have a good amount of detail, but the environments that you explore look rough and feature some low quality, low resolution textures. This issue has plagued Idea Factory’s games, and it’s a shame since if the environments were of the same quality as the rest of the game, it would be a very attractive package overall. Dragon Star Varnir’s loading times are quick and seamless, the game is clearly well optimised for the PlayStation 4.

Dragon Star Varnir has a strong, varied soundtrack full of background music to suit everything from casual conversation scenes to intense dragon battles. Powerful vocals are used in the battle themes to really give them some extra impact. There’s a reasonable amount of voice acting in the game, with mostly just the important story scenes having spoken dialogue. Dragon Star Varnir features dual English and Japanese audio options though, which is appreciated. I played through the game with the English voices and the quality was very good, with solid performances from every actor. The amount of emotion in each scene felt just right.

Overall, Dragon Star Varnir is a strong new JRPG from Idea Factory and Compile Heart. The combination of the dark, detailed story, interesting characters, and fun exploration and combat make for a high quality experience. At 60 hours for a playthrough on the Normal difficulty, there’s plenty of bang for your buck here. Dragon Star Varnir is one of the better JRPGs released in recent times, one that fans of the genre are sure to enjoy.

Dragon Star Varnir is a strong new JRPG from Idea Factory and Compile Heart. The combination of the dark, detailed story, interesting characters, and fun exploration and combat make for a high quality experience.