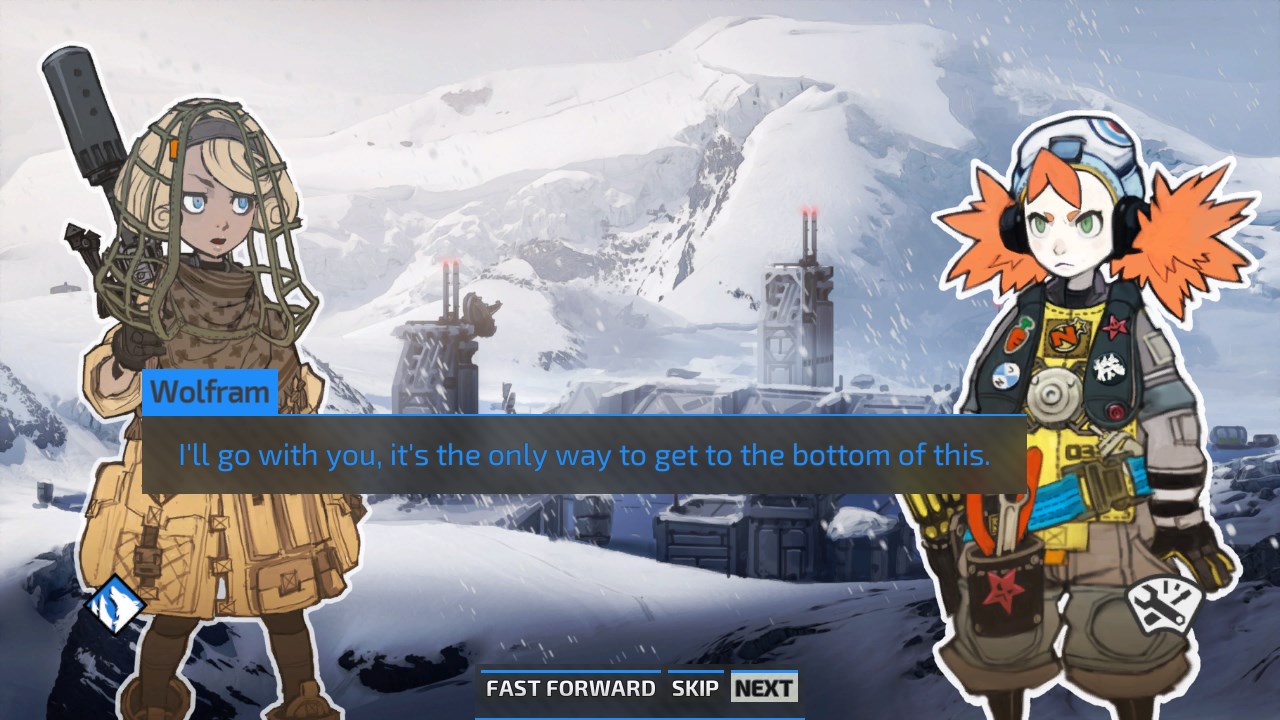 When it comes to the genre of tactical, turn-based, war games, the majority of them take on a more serious tone with military precision or revel around a mythical story of swords and sorcerers. There are one or two lighter takes on the genre and have been throughout the history of video gaming, but not many. Probably the most notable and often talked about of these titles was Advance Wars, which spawned a series of releases and attracted a huge following in its cutesy, yet crushing style of play. However, it is a series that has no longer appeared on recent Nintendo consoles, so it’s time for others to fill its boots and there hasn’t been a game more filling to take its coveted crown than that of Tiny Metal: Full Metal Rumble as it marches a release onto the Nintendo Switch.

Developed and published by Area 35 Inc., Tiny Metal: Full Metal Rumble is the sequel to the critically acclaimed hit Tiny Metal which released last year. This latest title within the series follows the same successful formula as its predecessor, but crams in more content to build upon the foundations of its pleasing gameplay. These include campaign maps, skirmishes and online multiplayer battles that incorporate over seventy-seven maps between the skirmish and multiplayer modes, thirty-nine campaign levels with over twenty-one unique units to command and additional hero and commander units that can change the course of any battle with a series of special abilities. There are also four levels of difficulty, although even the easiest of these provide enough tactical entertainment to test even the most battle-hardened gamers.

Its campaign revolves around the conflict between the White Fangs and Dinoldans, as well as follow the exploits of Commander Wolfram as she searches for her brother. From an impressively scaled world map, each scenario takes place on smaller-scaled map with a level of terrain that promotes defensive thinking, bottle-necked skirmishes and a series of challenge conditions that take place away from the main objectives. Despite the limitations of each battle taking place on confined maps, there’s an awful lot that you need to think about and consider; producing an exhilarating ride as you fight for conquest and glory. 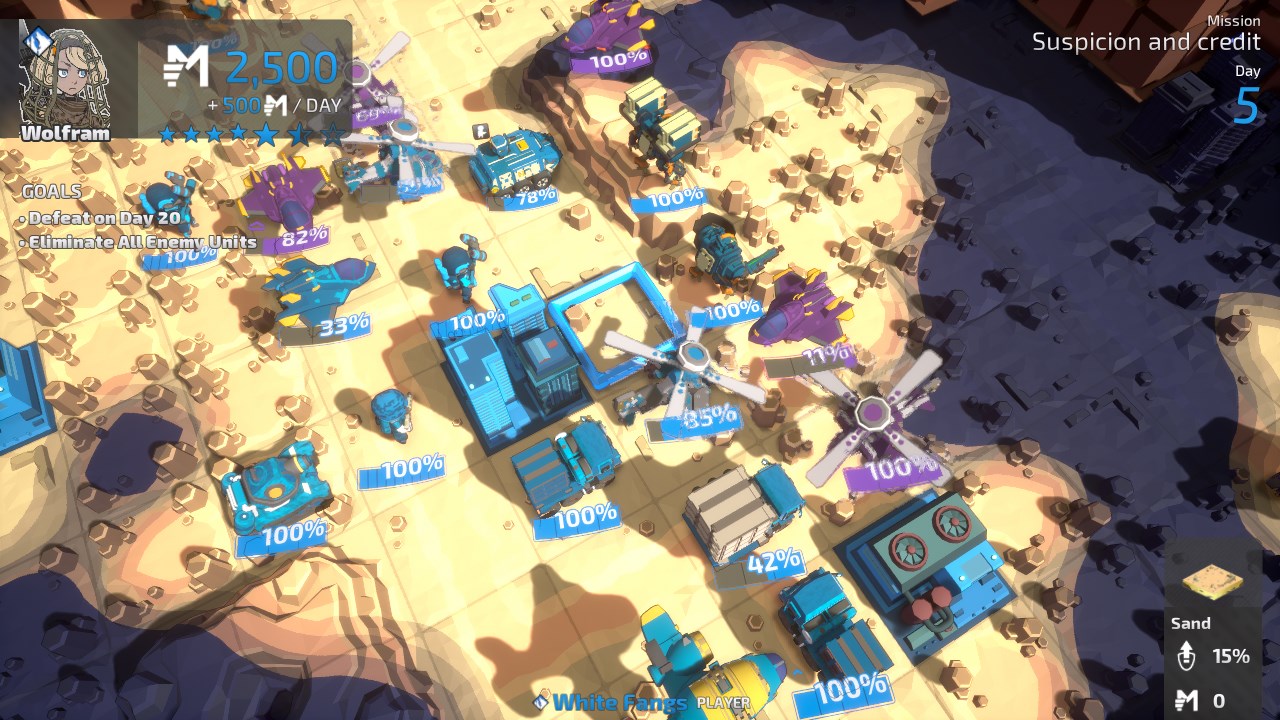 You can’t help but draw comparisons to Tiny Metal and Advance Wars as they both contain many similarities. However, Tiny Metal contains a more refined feel with three-dimensional graphics that are powered with the impressive unreal engine, a cutesy aesthetic that is easy to fall in love with, commander abilities and respective combat screens that highlight each individual unit as they engage each other. However, Tiny Metal contains so much more too, with flanking and team-up mechanics, the ability to merge units, taking over buildings to produce more units and an AI model that puts up a sterling fight; either on the defensive or offensive style.

Each skirmish, or battle, starts off with a limited number of units, as well as a series of sub-quests and main objectives. Depending on what unit you command, you move along a grid within a set number of spaces. The need to plan ahead is crucial here, as you race to take over neutral installations, build defensive lines, as well as go on the offensive to prevent your enemy from doing the same. As with any good tactical game, each unit possesses certain weaknesses and strengths against other combat types. For instance, a group of Riflemen are weak against the mechanised units of the Scouts, which in turn are no match for the heavy armour of the Metals. It plays in a cat-and-mouse style, forcing you think strategically about troop and unit placements, as well as what combat units will perform better against others.

However, one neat element within Tiny Metal’s arsenal, is the ability to position units in a surrounding formation; each one firing a barrage to try an eliminate their opponents. This in turn, can allow for weaker units to team up and take on more powerful enemies; sometimes even obliterating them from existence. It’s a very satisfying mechanic as you watch a unit at full strength succumb to the tactical planning of your troop placements. Should you find any units get significantly weakened in combat, you can also merge units of the same type in order to build their number back to maximum capacity. Another important element also comes in the requisition of neutral, or enemy-held buildings. The more territories you own, the higher your finances and larger the scope of unit creations by owning factory-type buildings. However, by taking over other types, such as cities, depleted units can re-arm and heal themselves back to the prime fighting conditions. 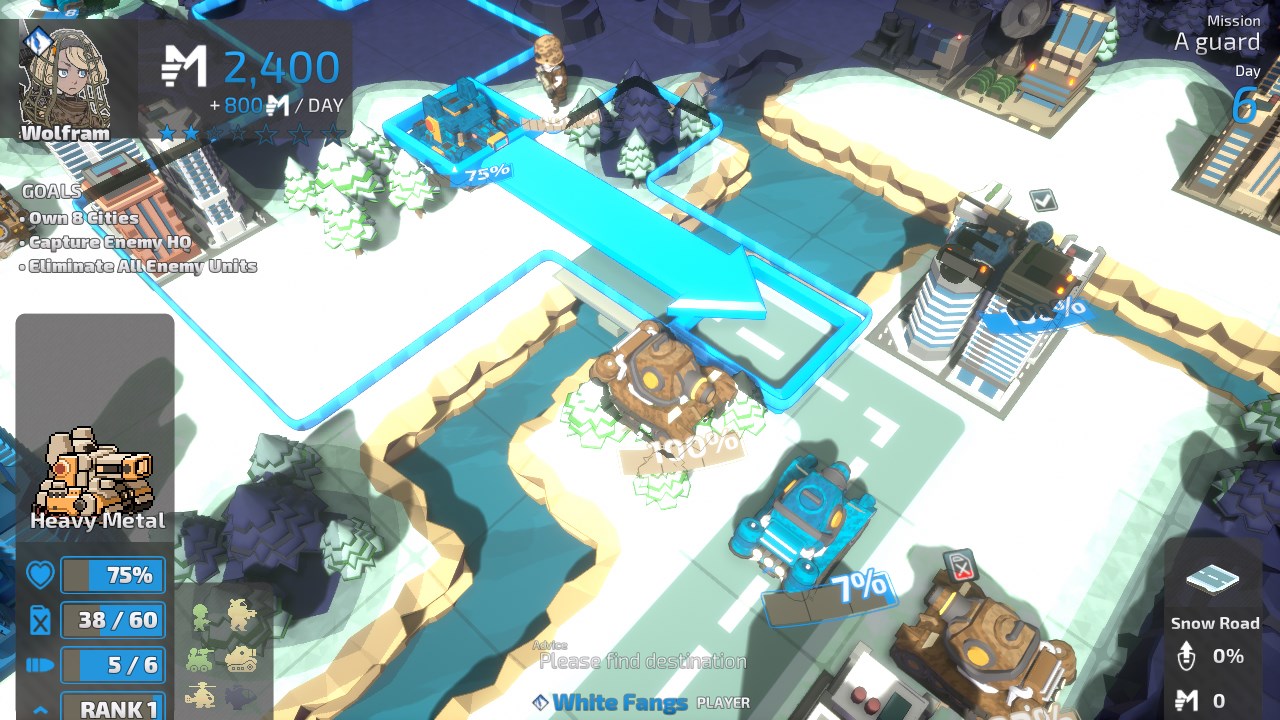 There are so many elements to take into consideration, that each battle becomes a tense and exciting affair. This is further bolstered with some very eye-catching visuals throughout each of its presentations. Battlefields are nicely varied with terrain types, as well increasing in size as you progress further into the game. Unit types and animations are also very well done, creating an immersion that genuinely makes you care for your units as you take them into battle. Each of the game’s mechanics, menus and controls are sublimely easy to get to grips with and is something that is presented in a good-fashion for new players in the game’s tutorials.

The main bulk of the game revolves around its extensive Campaign, although it’s impressively large roster of skirmishes and tense multiplayer action helps to prolong its long-term appeal. Whatever mode of play you choose, the premise around the core mechanics of the gameplay remains the same, but it’s all done in such a professional and pleasing way, that the game simply becomes a joy to play. However, despite its cartoony and cutesy appearance, this game isn’t a push-over. Even on the easier difficulty levels, the AI puts up a challenging fight; which is no bad thing and is in fact, the more rewarding for it as victory takes on a much sweeter taste.

Overall, Tiny Metal: Full Metal Rumble is one of the most pleasing turn-based, tactical war games that I have ever played. I, myself, was a massive fan of the Advance Wars series, yet Area 35 have built upon its blueprint and taken it one step further. With so much content, satisfying gameplay and pleasing aesthetics, this is another must-own game for the Nintendo Switch if you’re a fan of its genre. There’s plenty here for battle-hardened gamers, as well as enough information to make sure new players get a grip on its pleasing formula. Rest in peace Advance Wars, there’s a new soldier on the battlefield and its name is Tiny Metal.

Move over Advance Wars, there’s a new soldier on the battlefield and its name is Tiny Metal: Full Metal Rumble.