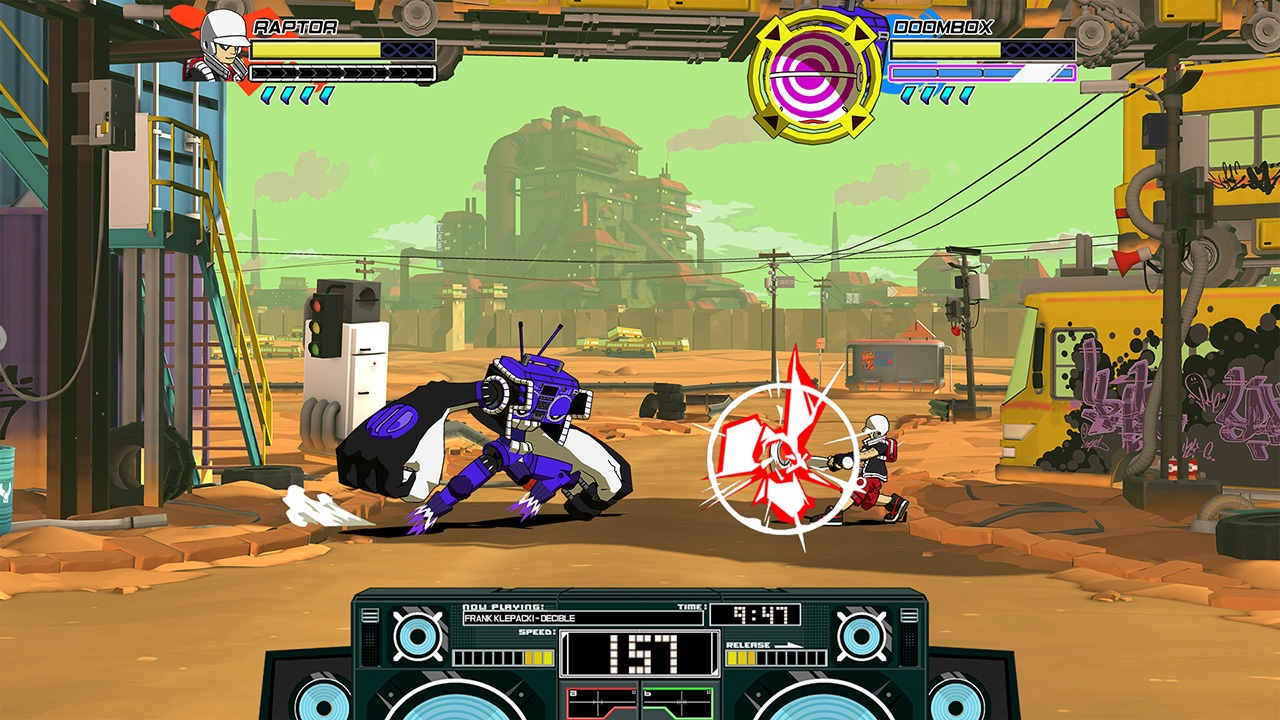 The most difficult aspect of getting better at fighting games, at least from my vantage point, has been working out the sheer number of potential combos, counters and sequences needed to succeed. Thinking back to the times where I saw my butt handed to me eight consecutive times by someone who played Voldo without using the joystick at all, it became clear that there was a ton of strategy and planning that went into fighting games. I still enjoyed them, and still do to this day, but I tend to shy away from the online scene and the competitive areas due to me not being able to understand everything I need to do. But what if things were stripped down to a more simplistic and direct design? One where all you needed to understand was “Don’t get hit?” Perhaps that’s the thing that I find so appealing about Team Reptile’s dystopian sport, Lethal League Blaze, and why I’ve been addicted to getting my behind stomped online.

Set in a future where things are generally bad, the people of this broken metropolis of Shine City develop a new sport that combines all the risk and speed of jai alai with the insanity of arena league baseball, and lo, it was good. Unfortunately, the game was deemed to be too dangerous because one person died in the process of playing it (seriously, just one?), and it was banned across the board. Naturally, the ban made people more interested to play it, so an underground competition started. The most famous of the underground leagues is the titular Lethal League, and the story mode of the game follows some of the characters as they seek to understand more about the world around them, continue to enjoy the sport they love, and fight for some funky freedom in a world gone mad. Truthfully, the story mode is a tad boring in comparison to the gameplay, but it serves the dual purpose of a.) allowing players to unlock stuff in a more interesting fashion and b.)  sample all the different characters to see what’s what. 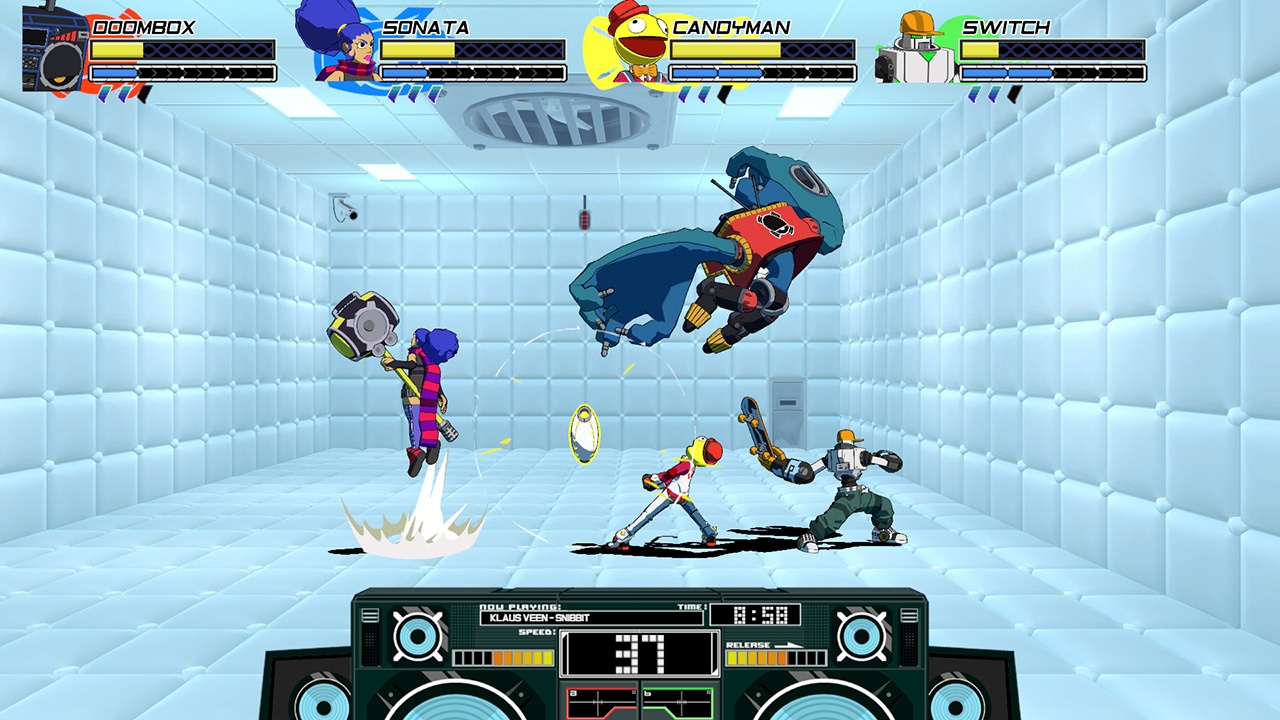 The main idea of Lethal League Blaze is to rock the face off of up to three opponents at once, but you don’t get to do it with fists or swords. Instead, a ball bounces around the screen, changing color depending on who hit it last. As the match goes longer, the velocity and damage of the ball gradually increases, until it’s a kinetic blur of madness that requires you to have unnaturally accurate fingers to intercept the ball. There’s simply hitting it, there’s the ability to catch and throw it, and you can bunt the ball into a secondary hit to add extra damage and umph. By successfully hitting the ball, players fill up a bar that allows them to do an ability (tapping the Y button twice) that will affect the ball in some way, either by putting some English on it, trapping it in a deceptive bubble that does NOT slow down the speed when the bubble pops, or otherwise affecting gameplay in some way that could really help or hurt anyone. Knock out the other players a grand total of four times each in order to claim victory. Seems simple, right?

In actuality, the success of Lethal League Blaze comes down to the performance, and the game excels in this direction. Running consistently smooth and silky, players are able to track themselves and the manic speeds of the ball across differently designed play fields and arenas, often times contending with three other players (either AI or human) who are desperate to be the next to get into the mix and take control of the ball. Between jumping, moving, and using split second determination as to when you need to swing/punch at the ball, players have to learn, quickly, about how their own character of choice and how other characters interface as the pressure increases. Players like Jet have different mobility tracks, being able to actually levitate via jetpack, which drastically increases their access to aerial returns, whereas Latch can actually spend a bit of time on the wall, getting out of the melee and refocusing on trying to grab the ball on a particular rebound. This is what I like to call a Layer Cake game, in which the initial taste is great, and being able to appreciate the different segments that have been created only makes the flavor more robust. The abilities of each character, both special attack and mobility, are balanced against one another: each is uniquely different, each has advantages over others, but none are left on a strange isolation of “too strong” or “too weak.”

Lethal League Blaze also already has a fairly active and fast online scene, which I took the time to explore because, well, it was actually there. A lot of times, with ports of fighting games or other competitions that rely on console-exclusive matching, I can end up spending minutes waiting to find others to play against, or just quit out of the frustration of not finding anyone. Looking around, I found inklings that there MIGHT be crossplay with other platforms, but I wasn’t totally sure, though that ultimately didn’t make any difference. In four different time frames, I was still able to get at least a one on one game going within a minute, and often able to wrangle up a full roster for a match. The latency with my arguably wonky ISP wasn’t terrible, and I think it might have even been good since I nearly won a match once. Due to the speed of the game and the pacing of the matches, even a full game can be done in under five minutes, making me eager to get more into it and play further online to develop my skills further. 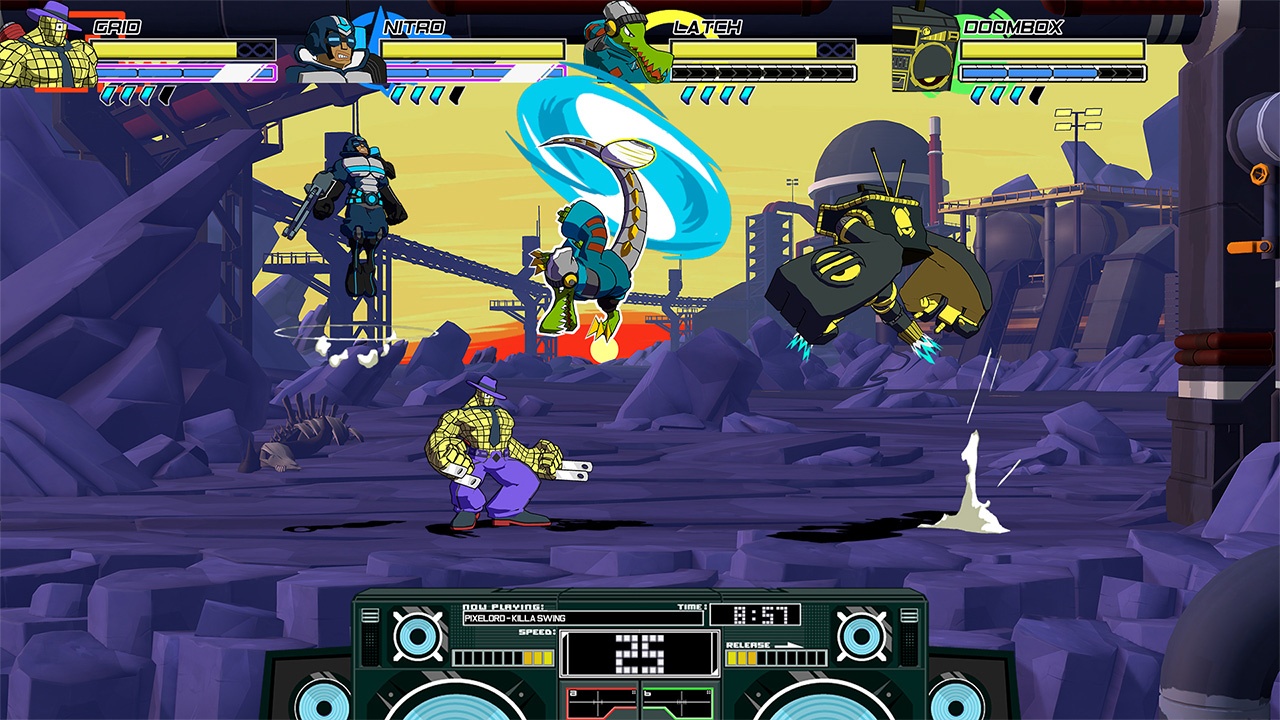 Visually and aurally, Lethal League Blaze are unbelievably tight. Players will love the distinctly grimy and vandalized art style that feels like a subtle nod to the urban street scenes where the Lethal League continues to thrive. The colors and designs pop, with bruisers like Sonata and Raptor presenting like enforcers amongst the populous, whereas Latch and Candyman remind us that there’s this whole other world of bizarre technology that we aren’t even touching on because this ball game is more important. And the soundtrack is going to tickle the fancy of anyone who loved the beats from The World Ends With You or Jet Set Radio. It’s a bit heavier in the tone and the grit, but it captures the funky and the powerful attitude of this game that’s run by the people, for the people. You can’t ignore the soundtrack, I recommend headphones to really get into the right mindset for when you’re stepping into the arena to prove yourself.

The replay for Lethal League Blaze goes well beyond just honing your skills and further into unlocking additional content, levels, music, characters and even game modes. The unlockable volleyball mode is actually a nice breakup from the normal gameplay, though I enjoyed the core mechanics most of all. Once you’ve gotten everything unlocked, there’s still the entire online world to conquer, but that isn’t even necessary. As long as you’ve got a couple of controllers and a friend with thumbs, Lethal League Blaze can be accessed by nearly everyone, and enjoyed in the same capacity. We’ve always said that the Switch is perfect for this or that game, and the old expression rings true for Lethal League Blaze. It’s meant for players to settle the score whenever, wherever, and I can think of no better place to do it than on the Switch, anywhere you go.

With punishing precision, fabulously fresh art style and the heaviest soundtrack this side of Naganuma, Lethal League Blaze sets it up and knocks it down solid.