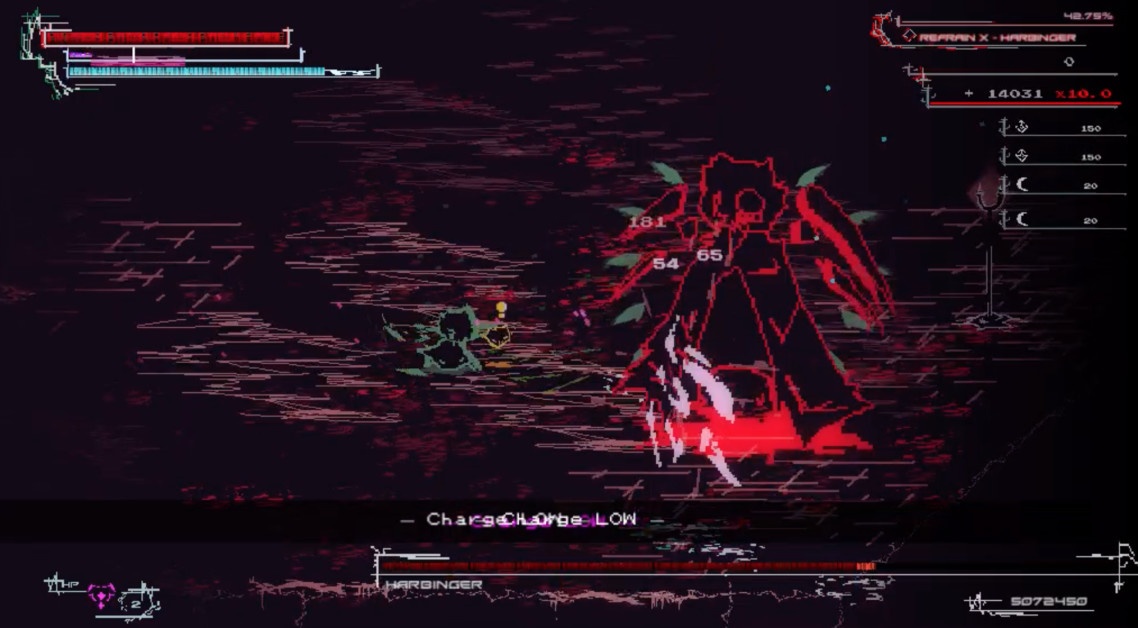 There’s a very, very tight rope to walk when it comes to delivering unique storytelling through a video game, especially when the tale and the lesson is purposely obtuse. When you make the decision on how to convey what you want to share with the audience, you run a very real, very tenuous balance between making sure it’s not totally obscured and lost, but also not spoon feeding and making the receiver feel talked down to or belittled. By properly wrapping the package in careful, deliberate threads and ideas, you get a chance to really surprise people, to give them something new to consume and to experience. I have no idea of the traumas or paths that lead melessthanthree to develop this cathartic vessel, but I’m very, very glad to have had a chance to see and play Lucah: Born of a Dream.

Even now, after several hours of playing, I’m still a bit fuzzy on the plotline. We have characters and roles, but they are never properly introduced or fully flushed out in a way that a traditional RPG or adventure game might provide. You get names and faces, things like Lucah, our titular character and protagonist who is apparently a Marked Child. You have Christian, Michael, Serah, Natalie and others, all of whom are a part of this damnation in some way. You’re trying to find some kind of release or salvation or at least answers, but the path there is far from clear, easy or concise. You’re left wondering, a lot of the time, who exactly is the “bad guy” in this scenario. Is it one of the people that you meet along the way? Is it someone who doesn’t even exist in this game, but only as a precursor to these events? Is it actually Lucah, and the perception of good and evil is really that backwards when you break it down? Or, far more likely, are there places between black and white where we live, and maybe there isn’t a singular idea of “evil” until we determinedly create a singular “good”? These are all ideas that came to light in the face of trying to unpack this game, one layer of disjointed exposition and borderline poetry at a time.

Unlike other games that I’ve played that try to convey storylines of heavier and more uncomfortable subject matter, Lucah: Born of a Dream is neck deep in complex and intricate gameplay, and that really helps to deliver the vessel in a more dramatic and satisfying way. Set up as a hack-and-slash action RPG, Lucah is a game that has so much at stake with you getting good and understanding the game better than you realize. You’re introduced to the ideas of moving around, using heavy and light attacks and controlling a familiar for additional ranged damage right away, and then, just as quickly, are murdered by a boss that (I think) is impossible to win against. From here, we are able to unlock the true mechanics of the game, which are the dodge and parry systems, and here’s where the combat goes around the corner. You immediately understand that just brutalizing forward and hitting things like mad is a fast way to death, which carries a heavier toll than the average game here. Instead, you begin to follow and understand the patterns of all enemies that you encounter, from the smaller beasts and horrors that seem to spawn everywhere to the larger, multidimensional monstrosities that will demand your blood in any capacity. You also get some Rewinds early on, limited use items that let you restart an encounter and try again without incurring…punishment. 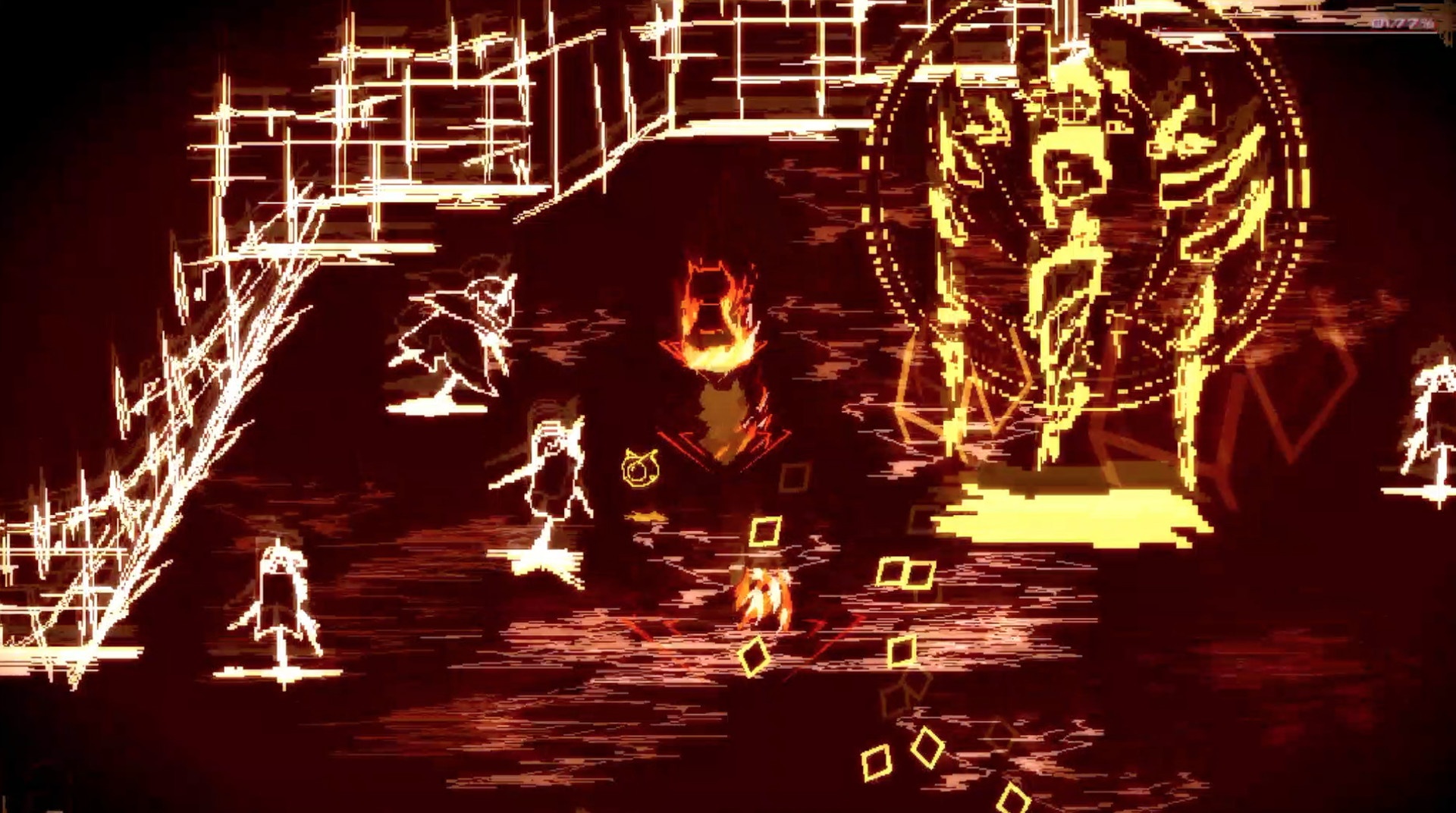 As you play further into Lucah’s saga, you’ll notice a slow-building meter in the upper right hand corner. This is Madness, and you’d do best to try and keep it from fully filling up. Full Madness will prevent you from ever achieving a strong ending, and, also, it’s something that you can use as a measuring stick for how well you’re learning the game. You can only progress one way in most cases, as Darkness will come and fill in pathways where you just walked or cannot travel yet. So, instead, you learn to move forward and, most importantly, get very, very good at parrying. There’s a distinct Dark Souls edge to the game in which players need to figure out how to quickly, tightly move in the presence of unbelievable damage, effectively deflecting as well as possible and then delivering some pain right back, hopefully to full effect. Early on, one of the first bosses lets the player know that even understanding the system isn’t a guaranteed win: with two different attacking beings, it’s easy to parry one, try and attack, and then need to rapidly dodge the other and break your own combo before you get broken. It’s frustrating, and you may end up dying several times to get the pattern down, but it’s an important lesson. To play Lucah as intended, you’ll want to get great at split-second response and decisions.

I personally adored how the combat played out, and the leveling system allowed me to craft a character that was mostly to my liking and desires, even with a game such as this. Lucah: Born of a Dream really allows players to customize and lean more on melee damage, higher HP and defense, better striking with their familiars, or to attach “Virtues” to give passive bonuses and effects, like seeing the HP bar for most enemies. What’s fantastic about melessthanthree’s compassion, however, is that players who are interested in seeing how this story plays out don’t need to become fantastic in order to succeed. You can adjust the difficulty level, true, but there’s a “mod” submenu that allows players to basically toggle on a clear and direct path to victory with unlimited stamina, unlimited items, stronger health and SIGNIFICANTLY weaker enemies. If you’re here for the story, feel free to turn these on and see how the game plays out. I would say something about “not the creator’s design,” but they put in the damn mods, so how bad can it be? You don’t get a shame message like the old Duke Nukem 3D cheat codes, so go nuts if you just want to see the story play out.

And the story of Lucah: Born of a Dream is genuinely a good reason to play through it. Drenched in Christian mythology and plenty of allusions to personal choices, guilt, sacrifice, shame and acceptance, there’s a level of sadness and hope that permeates throughout the game. The pacing ebbs and flows, sometimes letting you wade in dialogue and contemplation, other times dragging the player along at breakneck speed and watching people(?) turn and try and prevent them from getting to the end, going wherever answers might be hiding. There’s a good reason that you end up fighting against a character simply called The Messiah, but even that still doesn’t totally leave you certain which side of the fence you’re on. With murmurs about purification and cleansing, intermixed with ideas of suicide and departure, it can be a jagged pill to swallow, but there is something immensely satisfying about playing the game to the bone and trying to discover the alternate endings, no matter how difficult they may be to face. 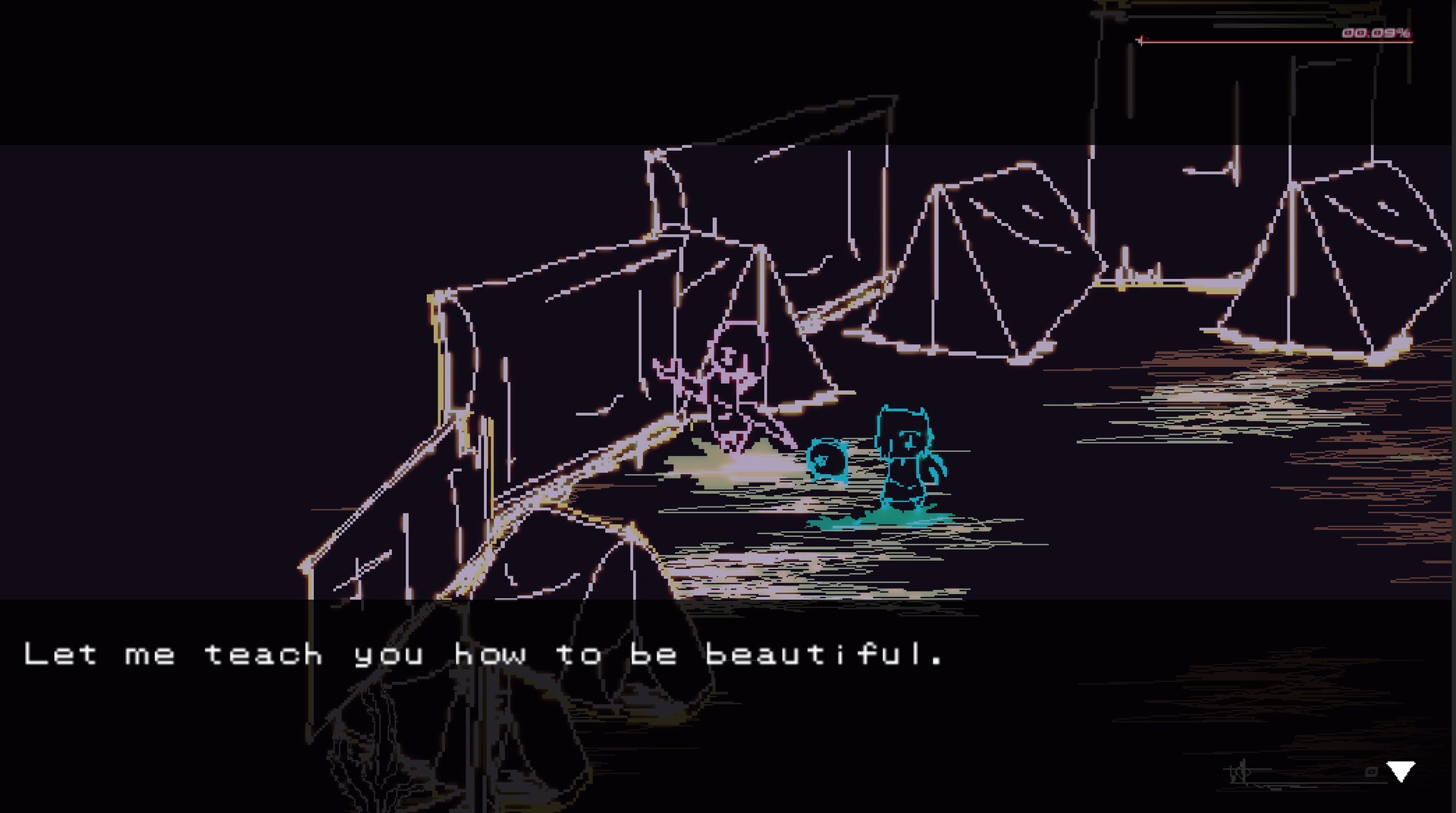 The art and musical style of Lucah: Born of a Dream are what initially drew me to it, and it kept me fixated throughout. Though some people might view the hastily scribbled, roughly hewn sprites and landscape to be merely “chaotic,” the entire presentation screamed the word “violence” to me. This is a fragmented, altering and objectively ugly design that’s meant to claw at the players visual interpretation, to keep you aware of how the game appears to Lucah and to the others you encounter. The monsters are the roughest to see of all, with more clarity appearing to people and things that could be important, could just be even scarier than the unknown monsters. Throughout, ambient electronic music pulses and murmurs beneath waves of entering combat and dashing footsteps, occasionally rising into a crescendo of something anxious and urgent. You never get a chance to rest and relax in this game, not really. Even when you find the save spots where you can rest, recharge and level up, it’s light a campfire in the dark woods. Sure, there is safety here, but everything outside of your circle seems to be leering at you, waiting for you to step away from it and then to seize you. Ironically, with each save being cross-shaped, one has to wonder if Lucah isn’t clinging to something for perceived safety while actually being in the greatest danger of all.

This was a trip, a mildly upsetting but thoroughly engaging, well worth every second of my time. Lucah: Born of a Dream still plagues me with questions that I need other players to bounce off of, but I haven’t met many who’ve enjoyed this title, and fewer still who understand it. Much like certain other underground successes, I hope that the console exposure boosts Lucah into the visage of other, bigger names, and we can properly dissect this tale in a format that lets others see what’s really going on in the quest for the Null Sun. Certainly, this is one dream that only leaves you feeling even more confused upon waking up, and I can’t wait for others to start dreaming.

Fragmented, disturbing, and unforgiving, Lucah is one of the most surprising titles I’ve encountered on the Switch, and it still delivers delicious gamplay.