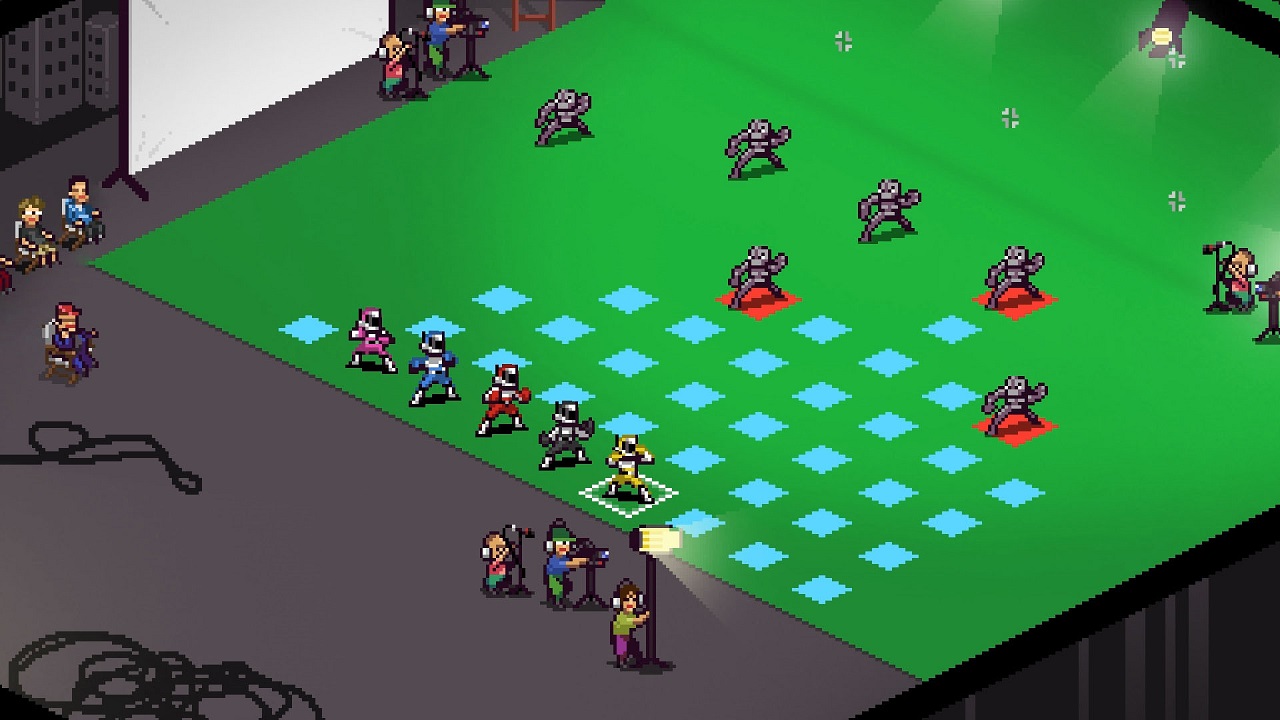 Whether it was when you were a child, or even through your own children and maybe, grandchildren, you should have probably at some time in your life come across the Power Rangers. Admittedly, it was never a television series or film that ever appealed to me, but my kids! Well, that is a different story altogether. They watched the shows, owned the toys and beat the living daylights out of me with their costumes. You can’t deny its level of action, excitement and cheese held an attraction for its audiences of younger viewers and although I never really watched them, they’ve ended playing a major role in looking back at life with my children. It was probably this premise that attracted me to Plug In Digital and Behold Studio’s latest video game, Chroma Squad as it turbo shifts and mighty morphs a release to the Go! Go! Nintendo Switch.

It’s no secret that Chroma Squad has been heavily inspired by the hit American franchise, as well its Japanese brethren Super Sentai. At first glance, you may be forgiven that this is just a run-of-a-mill, turn-based, strategy game; and in some respects you’d be right. However, much like the televisual heroes of childhood, this is a title that morphs into something mighty as it transforms into a giant behemoth with its layers of depth and customisation, as well as its intriguing story and constant banter that recognises the cheese within. It’s in this premise that the game excels, perfectly replicating everything that made its influences so popular.

The story revolves around a studio production that is filming a Power-Ranger’esque style of television series. As the director barks his orders, the series’ stunt doubles grow disillusioned with their roles and decide to leave the studio in order to start their own productions. After acquiring an empty warehouse, the five actors turn it into a studio of their own and begin filming their own series. In a showing of complete genius, each of the levels play out as episodes within a series of seasons, with the ultimate goal being to reach a season finale, as well as accruing as many fans as possible. 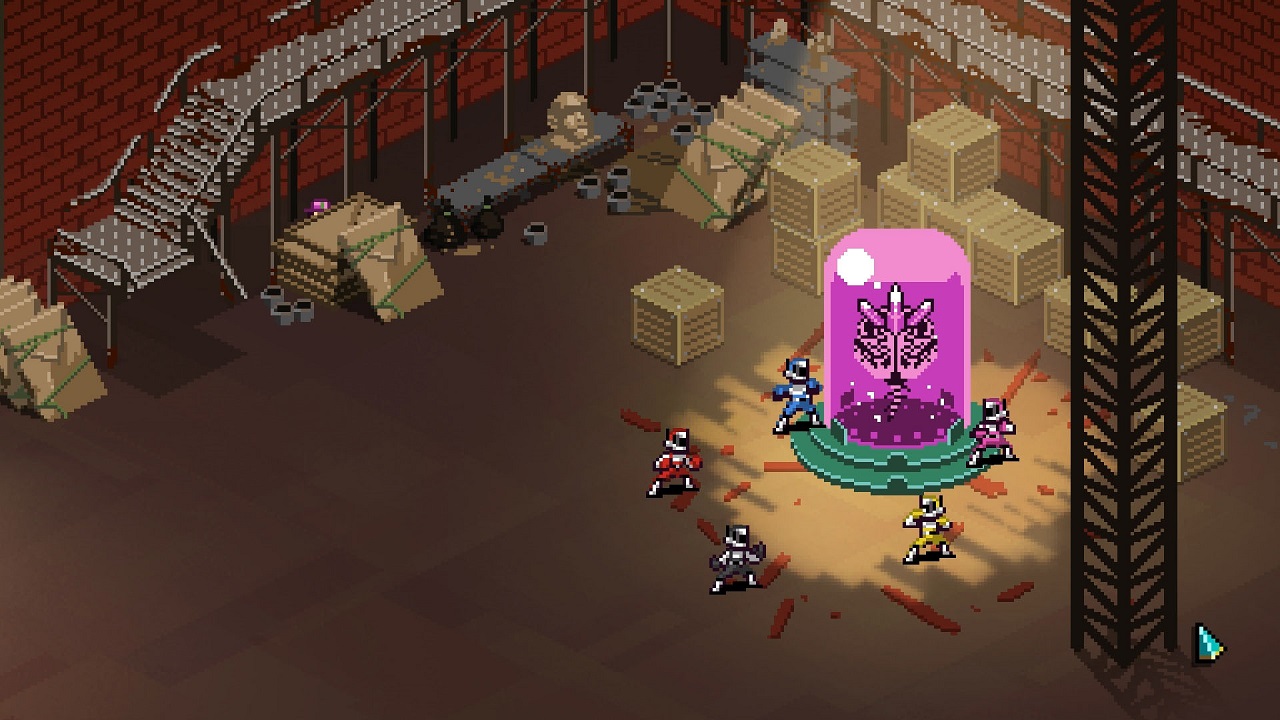 Much of the action takes place within the studio before the inclusion of backdrops and special effects; although there are some outside broadcasts and further options that changes the face of your sets. The main focus of the gameplay revolves around the combat scenes of the episode, with enemy grunts and bosses being hired for the newly-formed team to kick into the next series. The action takes place in a turn-based variant, with an isometric viewpoint across a series of grids. With its pixel art form and basic premise, the game takes on a very ‘retro’ feel, but its presentation perfectly matches its influences. However, don’t be fooled by its look, as there’s so much more lying within its depths that it actually brings something new and refreshing to the genre.

Much like the real-life Power Rangers, teamwork is the name of the game. You can flip off of each other, combine to produce a series of moves, use special abilities and weapons and even come together to form a huge mechanical robot. With these moves and abilities, you need to, not only work towards defeating the bad guys, but also to try and complete a set of requisite instructions from your director in order to attract a fan base. These can range from perform three flips, to defeating all minions before taking on the boss and activating your ultimate move to save the day. It captures the whole premise of filming your own television series and acting to create the biggest thrills for your audience.

There’s nothing too difficult in any of the game’s combat scenarios; although the higher difficulties can present a fairly decent challenge. It’s relatively easy to figure out the strategies in order to win each bout. However, with the addition of an audience meter and director instructions, it’s more important to win each battle with style by implementing a series of moves, combo’s and weapon strikes. By learning specific moves and abilities, they ultimately help to prepare for each of the season’s finales, where the boss fight usually involves transforming into a giant robot, or Mechazoid. These mechanised units grown to the size of the tallest buildings within the city limits. Combat here, is mainly a timing-based mechanic; although again, there’s nothing too difficult or demanding here. 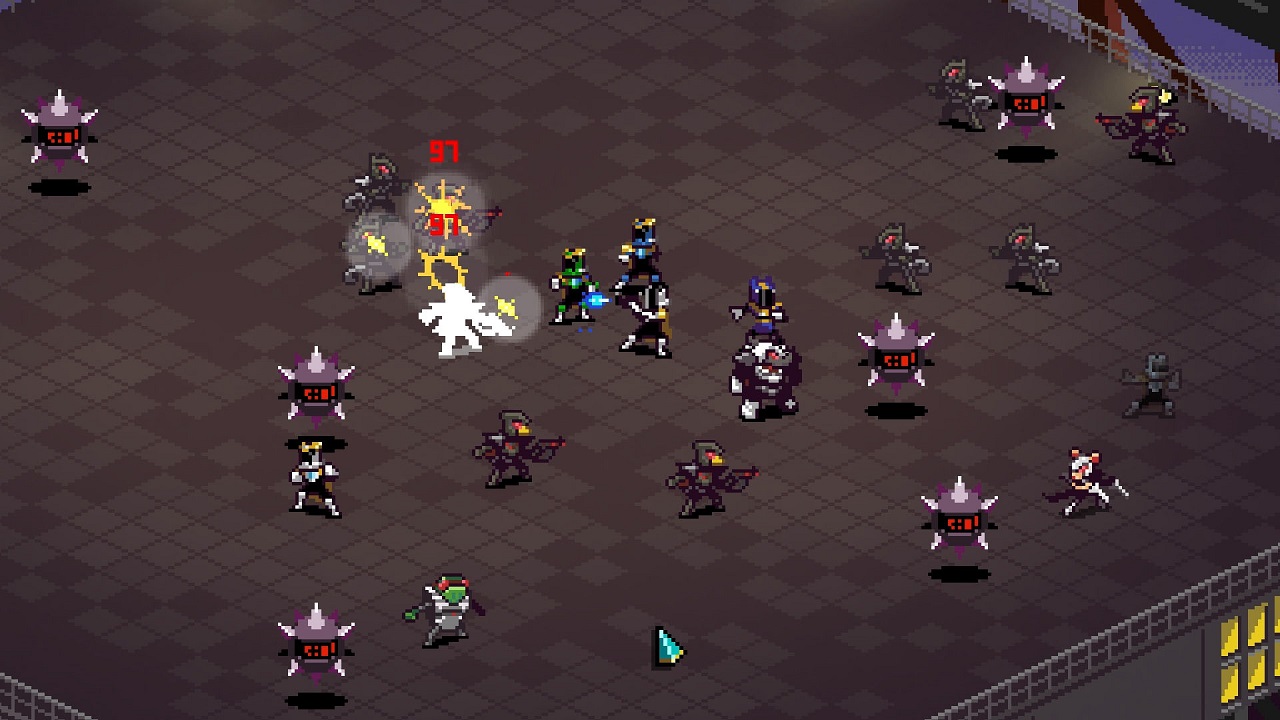 In-between filming, or each combat bout, you retire back-stage to look at viewing figures, fan-base numbers and the amount of money and materials you have accrued. This in turn, allows you to partake in a series of options that can help boost your production values. As well as buying props or items from a store, you can also invest in social media or advertising, upgrade certain studio abilities and construct a series of props using tape and plasticine. These award you with certain upgrades such as attracting a larger percentage of viewers, or more health and more damage outputs. You can even learn new moves and abilities to make the combat more exciting and alluring to potential fans.

One of the game’s biggest charms and appeal, comes in the form of its customisation and continued recognition of what it is based around. Pretty much everything here can be tailor-made to create your own experience, from the name of your studio, the squad and its members, plus the colour of their outfits. You can even create your own name for special moves and abilities which can produce a satisfying smile if you’ve picked something that is especially reminiscent to you. The game also does a sterling job of retaining the style of the shows it is based upon, with a sense of tackiness and cheese that it recognises through character interaction and stage props. It’s a firmly tongue-in-cheek style of game, yet one that keeps you engaged with its action, excitement and overall levels of fun.

To summarise, Chroma Squad is a great addition to anyone’s Switch library; even more so if you’re a fan of the series’ it is based on or have fond memories of your kids role-playing their particular idols. It’s not a challenging game, but its ease means that it can also be played by younger audiences who may get a kick out of it. Don’t let this deter you from a purchase though, as it’s its levels of charm and playability that shines through here. From performing a series of acrobatic moves to transforming into a mechazoid and maintaining your studio to increase your fan base, all of its mechanics combine to produce a nice throwback to when times were, maybe a lot more innocent than what they are now.

Chroma Squad is a great addition to anyone’s Switch library; even more so if you’re a fan of the series’ it is based on or have fond memories of your kids role-playing their particular idols.