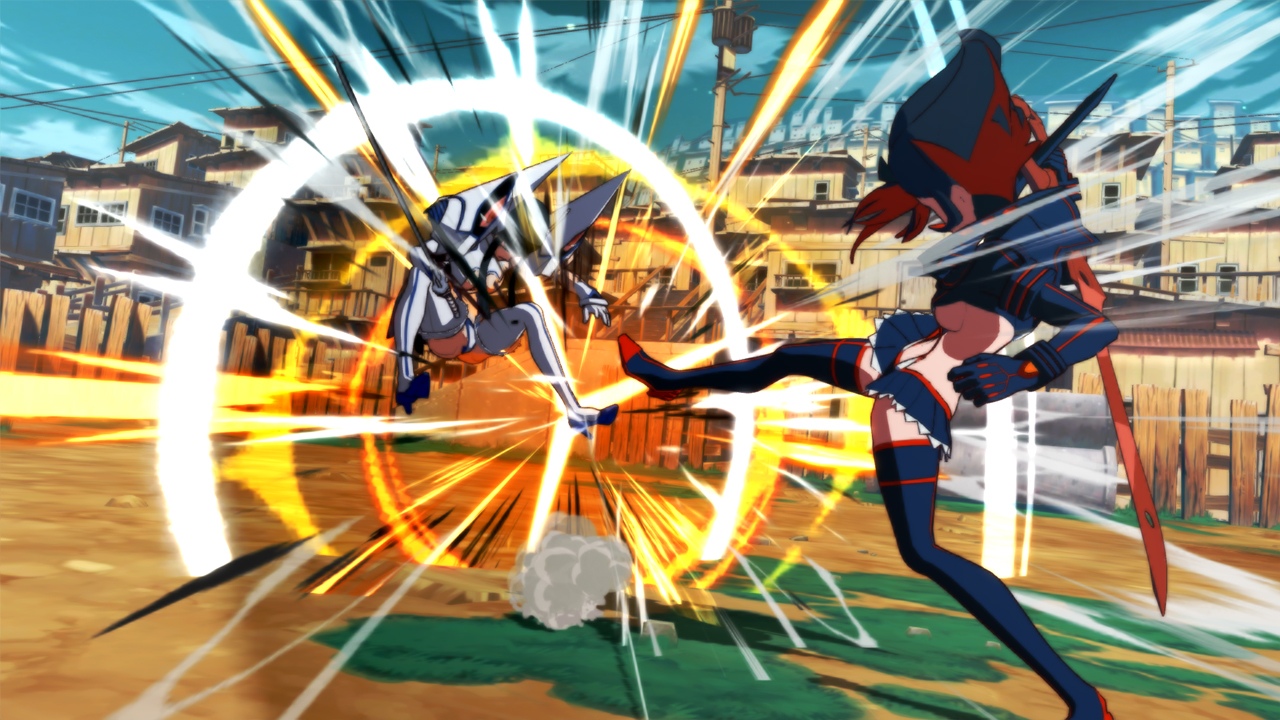 There’s a lot of stuff created in the name of fandom, and some of it is, frankly, horrifying. No one needs to figure out what would happen if the forbidden love between Buckbeak and Hagrid had culminated in carnal fashion, and NO ONE wants to see a comic drawn of it, yet, somewhere, it exists, because a fan dreamed of it and made it happen. Fans do so many original works – in forms of music, art and story creations – to show their love and appreciation for something that’s touched their lives dramatically. And, on occasion, the source gives back to them in a big way. A heavy push from fans brought us Serenity, the Firefly movie that broke everyone’s hearts in a good way. Veronica Mars came back on the air over a decade after the last episode aired, with a majority of the original cast. Fans love their fandoms, and, strangely, the fandoms sometimes love them back. Now, APlus Games, with help from Arc System Works and a very collaborative voice from Studio Trigger, bring a whole new level of enjoyment for fans of the unbelievably popular anime, KILL la KILL. This is KILL la KILL – IF, and it has everything you could want.

For those unfamiliar with the anime, it ostensibly revolves around a school (Honnouji Academy) where strong and promising students get special uniforms with super powers (Goku Uniforms), are overseen by the incredibly strong school president (Satsuki Kiriyuuin), and starts the animation with the arrival of an unknown transfer student (Ryuuko Matoi). The anime revolves primarily around Ryuuko trying to find out who murdered her father and avenge his death, and all the absolute madness that comes from that. I won’t spoil the anime because it has a LOT to do with the game, but, at the same time, it doesn’t. The story mode changes seats and directions, instead allowing fans to see how the story plays out from the perspective of Satsuki, which is sure to make many fans happy. Also, don’t just assume you know everything that’ll be here in the game in terms of plot, because it’s absolutely worth seeing what the game decides to take liberties with moving forward.

The story mode of KILL la KILL – IF plays out in the most spectacular fashion, combining cutscenes of exposition and plot with arena-style battles between the player and at least one other opponent. With the focus being more on what’s being said and what’s being seen, players who are anxious to do something might get antsy very quickly with quite a bit of watching, listening and (in my case) reading to get to the next fight. This seems as good a time as any to let people know: if you’re not interested in anime or following anime plotlines, you might just need to bail on this game entirely. Not only is the story the entire reason to indulge in the largest part of the game, it’s also the most efficient way to unlock a lot of the extras that you can access beyond the story (it might actually be the ONLY way to unlock some things). With every chapter of the story that you complete, you gain access to additional content: character models, alternate costumes, and, naturally, the ability to watch the cutscenes separately without the interspersed battling. When all is said and done, it’s almost like you unlock an OVA of the original KILL la KILL animation, giving players something they can genuinely revisit post game again and again to enjoy and witness. 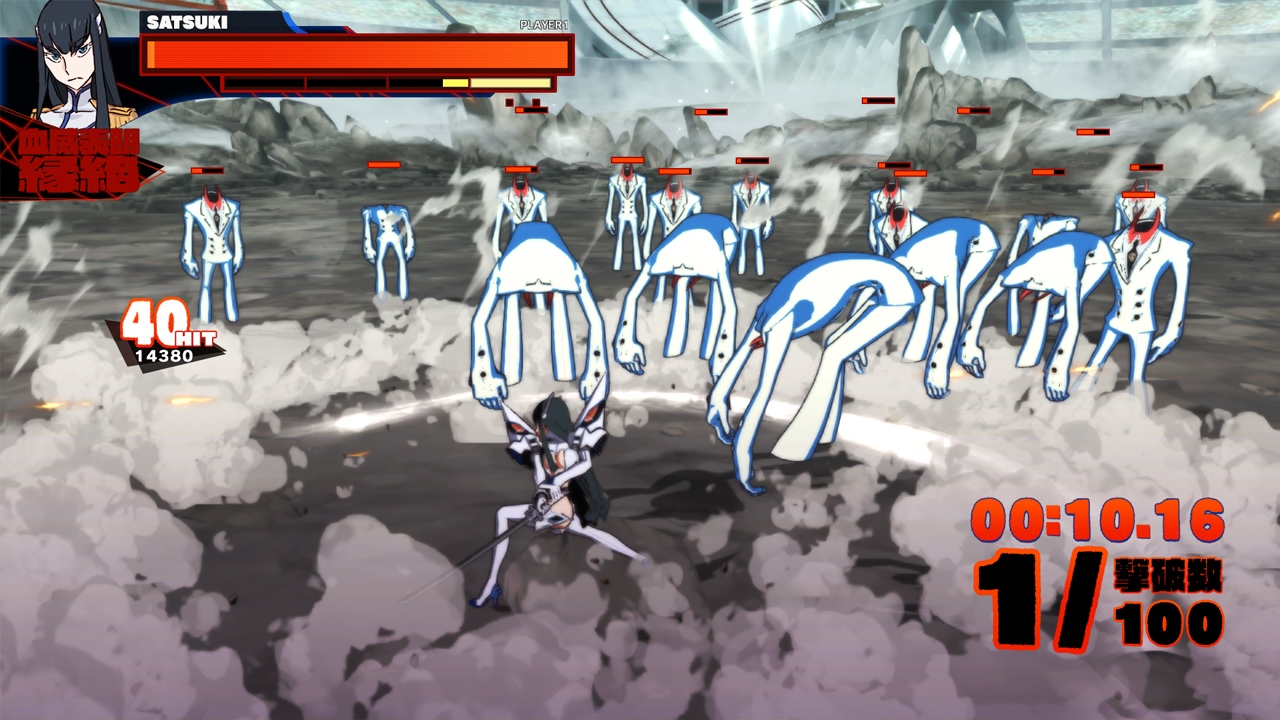 And players will be able to enjoy these cutscenes at leisure afterwards. KILL la KILL – IF does a magnificent job of combining the original character models and designs as created by Studio TRIGGER and mixing them with a solid cell-shading variant to create a CGI effect that captures the spirit of Honnouji Academy to a T. Additionally, from what I can tell, all the original voice cast have returned, so if you have a favorite seiyuu whose performance you’ve enjoyed in the show, they’ll be here to deliver all the energy, camp and emotion you could want in an anime about clothes that give you superpowers and eyebrows that seem to control your entire face. And if you’re one of those people who needs dubs instead of subs, don’t worry: the English voice cast is here, too, delivering a surprisingly solid job in their work as well. There has been no expense spared, no corner cut, in making sure this 6 GB package contains all the best elements to make you feel like you’re in the KILL la KILL universe.  As a result, the initial load of the game does take a minute, but, once you’re in, you’re in.

Combat, which is the primary gameplay of KILL la KILL – IF, is an odd duck that’s both satisfying and exciting, but also sometimes a tad boring (at least in the story mode, less so in free fight and versus). Characters engage in melee with other characters in a more open arena setting, so there’s plenty of opportunities to block, dodge and run around before dashing in for the killing strike. The effect creates a very tenuous game of touch and go, wherein blocking at the wrong time could result in someone breaking through and beating the hell out of you, but a well timed block wastes their time and sets you up for a good counter combo. Players will (naturally) gravitate to Satsuki, having so much practice with her in story mode, but there’s a good deal of variety within the available characters, which are only eight in total BUT run the gamut of who’d you expect to be fighting if you’re familiar with the story. Within the story mode, all but one battle really plays out fast and dirty, allowing players to rip through the battles without worrying too much, but you still have to understand the system and work out when to use ranged attacks, when melee is best, and when to go all out with certain powerful moves that generate over time. The practice mode also allows you to get your timing down and discover what kind of a fighter you are, so don’t lose hope right away if you keep getting murdered at a particular battle. 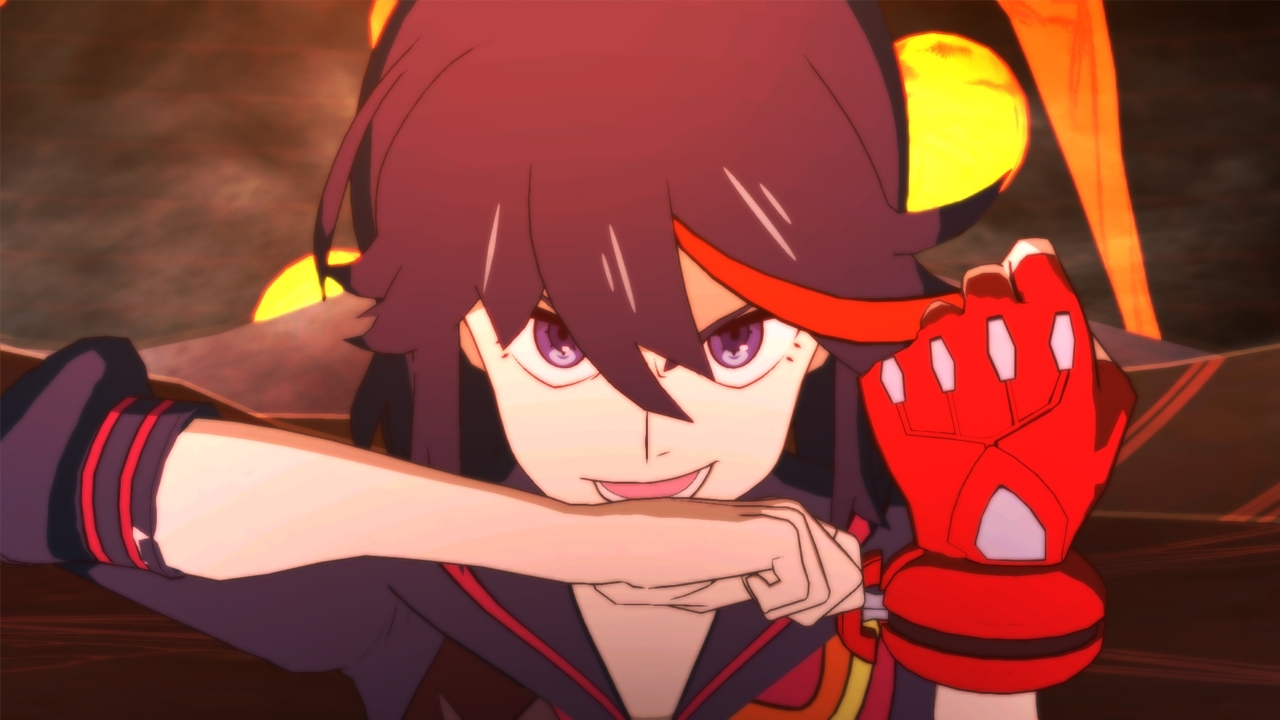 At the very core of everything, KILL la KILL – IF is a present, wrapped in blood and madness, for the fans of the anime who’ve been supportive and strong throughout the years, and it’s a damn fine one at that. Besides the robust story mode and the different battle styles, there’s a bevy of additional content in the gallery, from the cutscenes to an entire diorama area where you can set up and pose your favorite characters, in different uniforms, to create fantastical scenes of humor and violence. Most everything here is unlocked via GP currency (which you get from story mode completion and individual battle victory), so be ready to grind out fight after fight if you want to unlock every single track of the soundtrack. But don’t worry: if you’re just trying to keep track of who everyone is and where they lay their allegiances, the glossary is fully unlocked and can keep you up to date the best it can.

This review is purposely vague and a bit dodgy on details because a lot of what’s inside KILL la KILL – IF is a fantastic surprise for fans to discover when they dig into the game. There are so many times when sequels, adaptations and ports are clear cash grabs to trap faithful fans into dropping their paychecks because it’s got the right character on the cover. That’s simply not the case here: this is a serious labor of love. For years, people said that the Ghostbusters game by Terminal Reality was the unofficial third movie due to great writing and voice work from the actual actors. KILL la KILL – IF is the parallel chapter of the anime, offering so much material, insight and engagement that you’d be hard pressed to ignore this if you love both the show and great fighting games. Sure, someone’s gonna try and leak all the cutscenes to YouTube to spoil the fun, but why the hell would you do that when you can fight here, in the game, and have a blast yourself? Just a last note: if you’re at all offended by boobs and butts, you might be a bit put off by several uniforms, but hey: that’s just how the Goku Uniforms work.

KILL la KILL – IF is the 26th episode of the anime (in my opinion), and that should be enough to get most fans absolutely salivating.