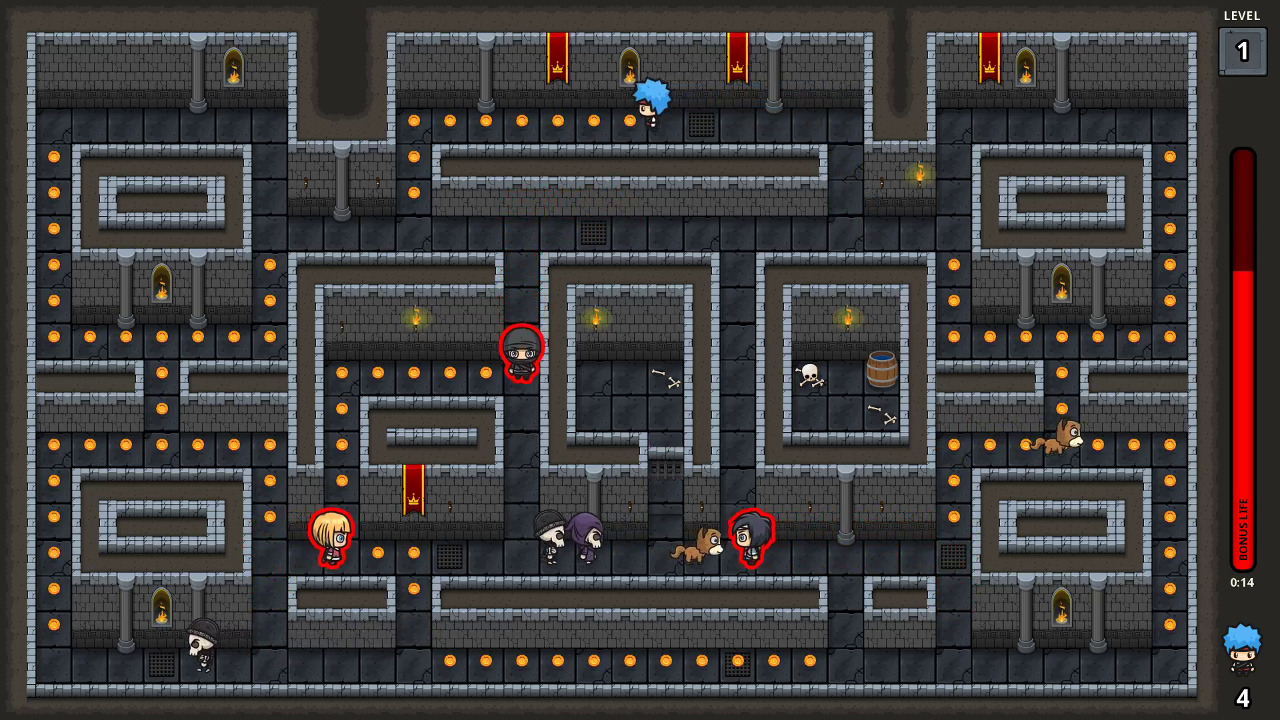 Quest for the Golden Duck (another title from Bigosaur) is, without any shame or attempts to disguise itself, a Pac-Man styled game. You have to run around a maze of sorts, collect coins, and, essentially, that’s the game. If you’re totally unfamiliar with Pac-Man, which is, mathematically, a possibility, that means you have to navigate a series of corridors which may or may not lead to dead ends and also contest with a number of bad guys coming after you, because, if they touch you, they will kill you. There’s nothing wrong with being a Pac-Man clone, for the record: it’s been a while since I’ve seen a decent take on the genre, and having something new coming at you really does feel refreshing and makes for a potentially interesting game.

To their credit, Bigosaur is sort of making themselves known with their style of character design and ideology, especially with the layout at the very beginning of seeing the many ways you can play this game (single player, joycon, pro controller, etc.). The characters are cute, from the main humanoid protagonists to the “evil” bad guys who are little more than cartoony skeletons, dogs and ghouls. Each and every sprite that’s used has an air of sweetness to it, even if the character is intentionally trying to be a bad guy, and so it’s really one of those perfect titles for younger children, compounded by the fact that the game is exceptionally easy to control. Unlike the Pac-Mans that I’ve played in the past, however, Quest for the Golden Duck has no autorun, so you do need to keep the button held down to keep moving in a certain direction. But, with either the directional buttons or the joystick to steer you along, you really can’t go wrong with how you approach the game. 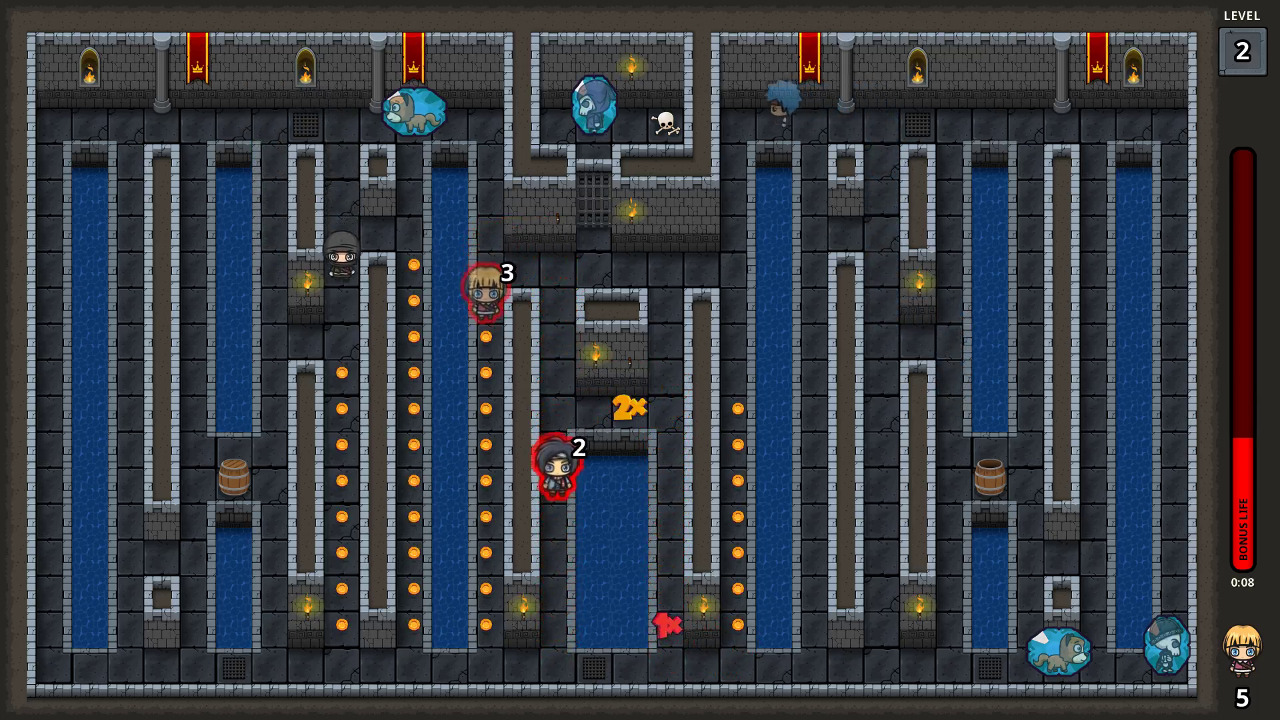 Quest for the Golden Duck does its best to infuse a bit of originality to the formula, and it mostly works out well. The main objective for each level is to get all the golden coins, and there’s a bonus meter that will grant you an extra life if you manage to get all the coins before time runs out. The enemy AI operates well in a twofold aspect. One, they don’t start charging around the dungeon until you actually pick up a coin, so it grants you the opportunity to try and plan your route (and, for a handful of stages, you can set yourself up perfectly before the rain begins). Additionally, the enemies all have their own movement patterns and reactions to you that are explained in the short but helpful tutorial. You’ll want to know what kind of enemies are just patrolling around, which ones are actively hunting you, and which sort of have an in between that could be manipulated in your favor. It’s highly doubtful that you’ll be able to perfectly get through the five chapters of the game without suffering a bit, so just take the corrections as they appear.

The items that appear throughout Quest for the Golden Duck are interesting, and I appreciate the inclusion of something besides the straightforward “power pellet”  (in this case, a red gem) that allows you to “eat” the bad guys as well as the coins for a limited time. There’s also the addition of a freeze potion and a lucky invisibility clover. The clover I think is a great addition, as it doesn’t make you invulnerable BUT it does change how you affect the enemy patterns for a period of time, challenging you to think in a different way to make things successful. The freeze potion, on the other hand, doesn’t last very long and also doesn’t take away the effectiveness of enemies themselves. I was a little shocked when I froze a skeleton in its tracks (in a seriously huge chunk of ice) but still lost a life when you touch it. Maybe that’s my own ignorance, but I figured that, now that the creature is a solid glacier, it wouldn’t be as deadly.

As the dungeons are fairly robust and varied, Quest for the Golden Duck can hold the attention of a single player enthusiast for a good deal of time, but the whole thing does come with a bit of a caveat. If you’re really into Pac-Man and think the additional changes (items, enemy movement patterns) are great, then you’re going to love what you see from the very beginning, as that note plays throughout the game. On the other hand, if you find the thing to be a tad boring or repetitive, then you’re in for a bad time, as what you see is very literally what you get. Sure, you add in some traps a bit later on to make the stage spicy, but you’re still just grabbing coins and dodging dogs. It’s a fountain of Coca-Cola: if you like Coke, great, here you go. If you really wanted something else to drink, clear off, this is a Coke restaurant. 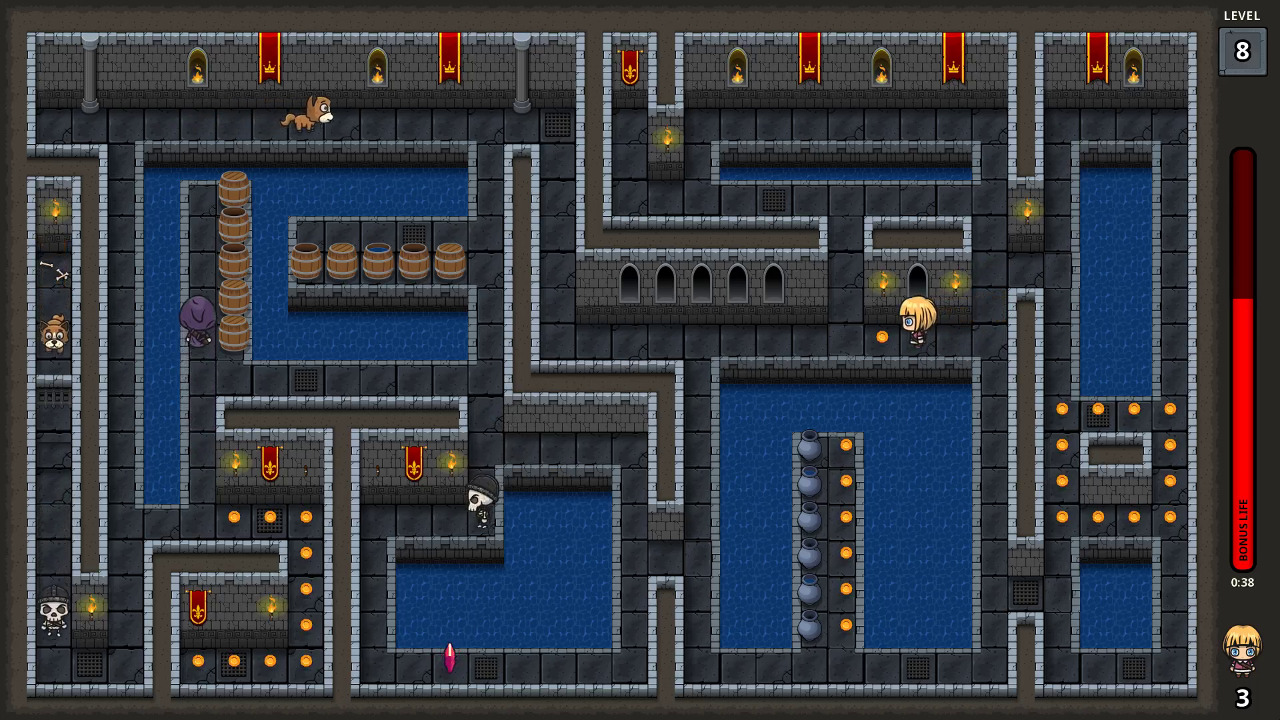 Being able to go into Quest for the Golden Duck in a multiplayer capacity is also fairly fun, making the main quest a bit easier, and with more of a competitive edge in versus mode than any Pac-Man game that I ever played. Rather than see who can get the most coins or run two different screens parallel, you do a sort of cat and mouse routine, with one team being the heroes and the other being the villains. I would recommend setting up a game wherein the heroes are at least 2:1 against the villains, simply because each stage ALSO has the NPC villains, which means, even on the best days, there’s two additional bad guys against however many heroes you have. This is definitely a case where being a bad guy can be more fun (since you might be able to blend in with your NPC brethren and fake out your friends before launching a direct attack), but there’s something to be said for being able to successfully be a hero and counter both the natural computer’s aggression AND a human with nothing to lose. The human players also have the potential to grab a power up and smash their friends, so the playing field can be leveled.

All in all, Quest for the Golden Duck is a simple, enjoyable game that can have a bit of longevity through completionism and multiplayer competition. It’s quaint without being particularly engaging, has a decent footprint for install and runs well, and sometimes freaks out with controller rebinding (try not to let the Switch sleep in the middle of a game), but generally has no problems. It’s good, a tad forgettable, but certainly leagues better than some.

Quest for the Golden Duck Review

A cute and simple Pac-Man clone that invites friends and foes alike to collect coins, avoid traps and try to find the fabled Golden Duck.