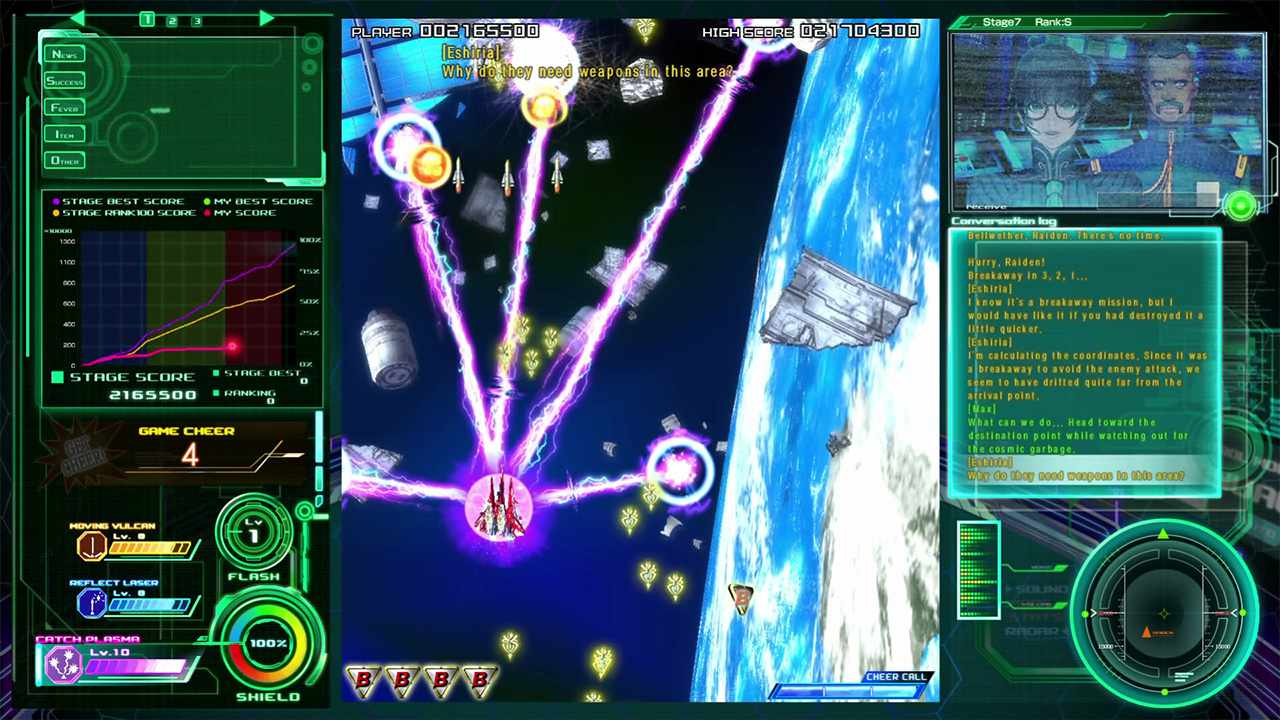 The Raiden series has always been a bit of a weird one; starting way back in 1990, it has been around for nearly 3 decades without ever garnering the kind of mainstream recognition that Cave and Treasure’s finest offerings have managed. It has always been a solid shooter, and unlike many of its competitors, remains surprisingly accessible to newcomers, but for one reason or another, it has never quite captured the imagination of the hardcore or the mainstream. Perhaps its commitment to delivering a shooter that is genuinely accessible to the masses has kept it from garnering the kind of critical or commercial success that it arguably deserves, but whatever the case, small Tokyo-based studio, MOSS are sticking with it for what is essentially the third release of this largely fantastic shooter.

Originally released on Xbox One in 2016 (a holdover from the Xbox 360’s rather surprising position as the console of choice for nearly all of last generation’s major shmups), that was followed up rather swiftly with a more well-rounded and fully featured, Director’s Cut in 2017 for PS4. Despite being late to the party, this Switch edition is essentially the same game as the 2017 PlayStation 4 release. While both are fundamentally the same game as the original Xbox release, the updated Director’s Cut does include all new stages (a welcome addition to any shmup – they always tend to be rather short on content), and perhaps more notably, the return of the series’ rather bonkers 2 player mode. While it’s disappointingly offline only and a bit of a visual mess with two fighters on screen at once, it remains a welcome addition and a pleasant return to the series’ roots. 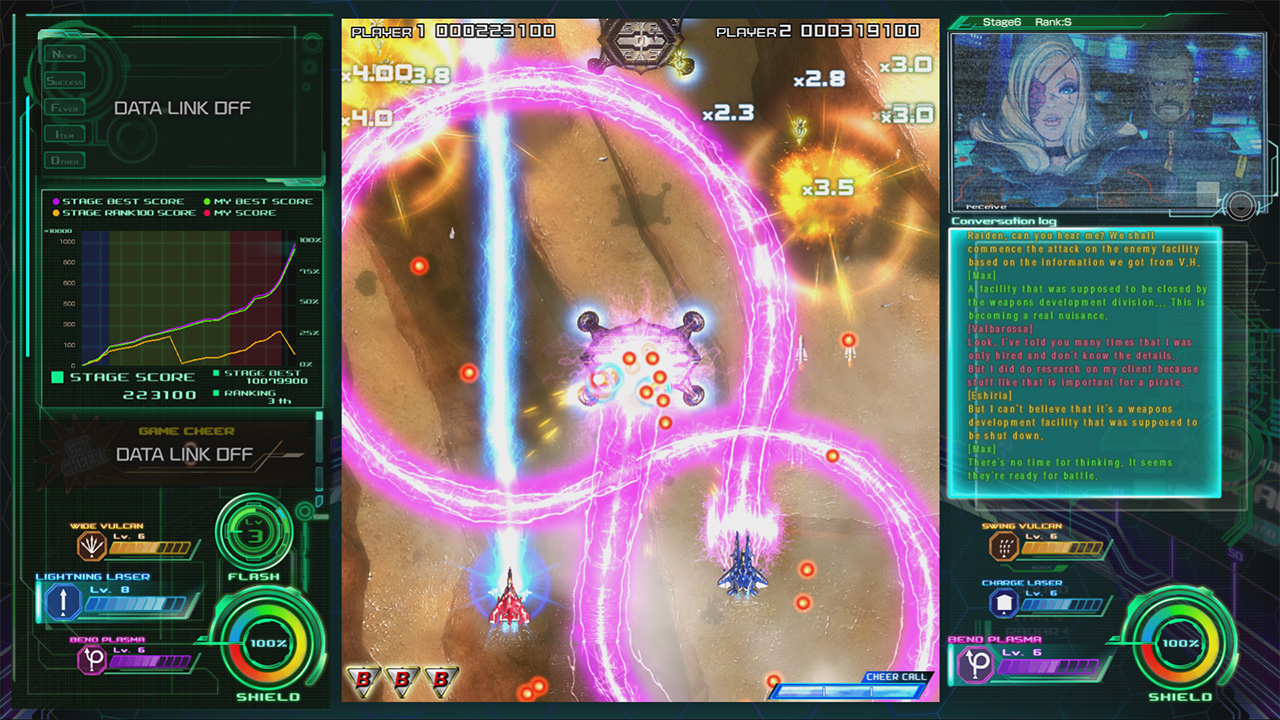 The only other big draw is, well, the Switch itself I suppose. Without a noticeable visual downgrade, this remains the same great game as before, only now, it’s a great game that you can take on the go. That will be a bigger bonus to some than others, but Raiden V (and shmups in general) are a great fit for on-the-go gaming. Raiden V in particular, with its straightforward mechanics and relatively simplistic combo system ensures that it’s incredibly easy to pick up and play and perfectly suited to a quick burst of high intensity gameplay.

Other than that though, it really is business as usual – Raiden V remains a classic vertical shooter, one that is home to a solid selection of ships, plenty of impressive weaponry and an enjoyable, if somewhat simplistic, upgrade system. From wide beams to the infamous toothpaste laser, Raiden V might well lack any sense of notable innovation, but it certainly doesn’t want for an old school sense of fun or spectacle. What it does, it tends to do very well, and honestly, with the genre in the shape it is now, being simply accessible almost feels like an innovation unto itself. Okay, so there is an all new cheer system, but yeah, I’m really not sure about that one. In theory, the ability to cheer on other players as you both play (in totally separate games) to fill up a unique special attack meter is kinda cool, but in practice, it never really works as advertised and soon falls by the wayside.

With the genre itself becoming more and more niche, the vast majority of developers have decided to take the genre in an increasingly hardcore and largely impenetrable direction. There have been many genuinely fantastic shooters released in the last decade or so, but if you’ve never played a shmup before and suddenly get dropped in to a Cave-style bullet hell shooter, then………good luck – you’re going to need it. Raiden V on the other hand, while still very busy, actually feels relatively mundane by comparison. For one, rather than the choreographed bullet hell found in most modern shooters, Raiden V’s enemies will actually take the time to shoot at your directly. That might not sound like a big deal, but it’s something that rarely (if ever) happens in a shmup. Don’t get me wrong, Raiden V’s enemies are as dumb as a bag of hammers, but by simply aiming at you, it allows for a surprisingly distinct flow to gameplay while also allowing for less on-screen clutter. 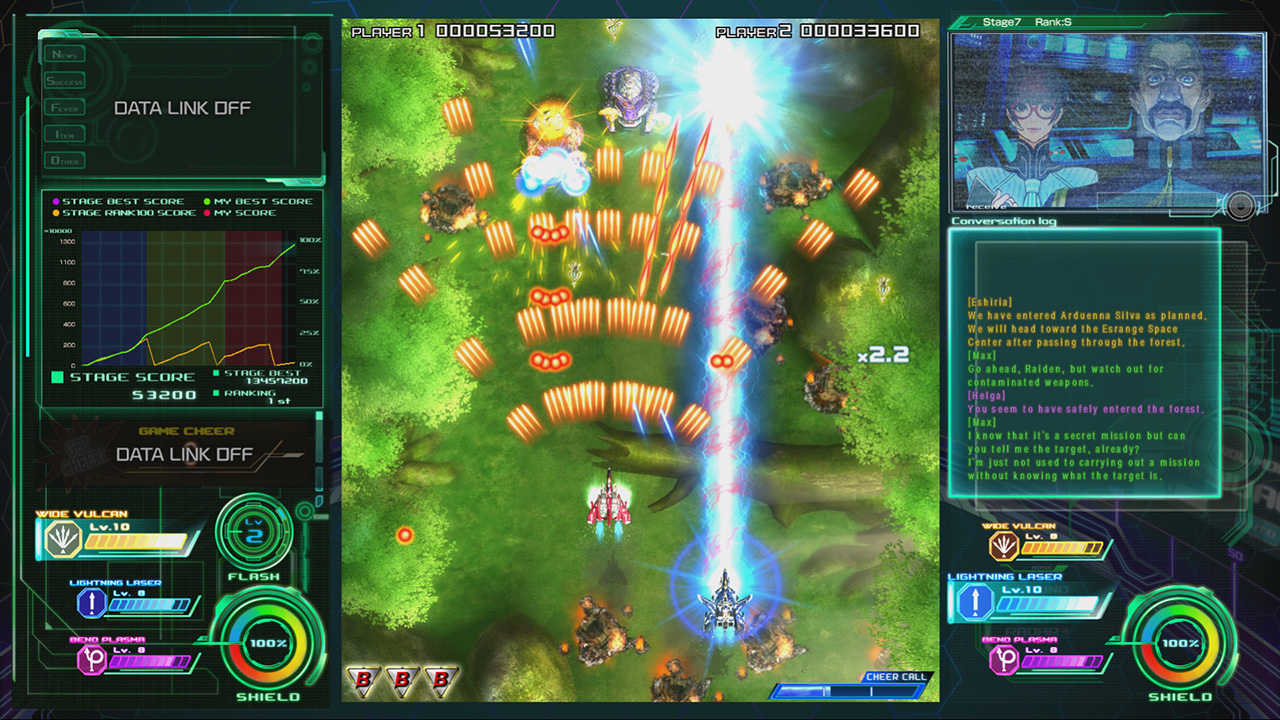 Rather than being genuinely innovative, Raiden V stands out from the crowd on the strength of its old school design and its collection of unique design choices. Again, a health bar might not sound all that distinct, but in a genre famed for its one-hit deaths, it does lend the game a somewhat idiosyncratic design ethos, one that, while far from revolutionary, stands in stark contrast to the genre norms. The same is true of the combo system – it’s rather basic by the modern day standards of genre, but it does encourage aggressive play and up close kills, emboldening highly skilled players to push forward in to enemies rather than to stand off and simply avoid incoming ordnance.

It might be old fashioned, it might re-use assets and enemy designs from previous games, and by the standards of the genre, it’s actually surprisingly easy, but despite its issues and its resolutely (and unapologetically) old-school gameplay, Raiden V remains a fantastic shooter, one that benefits greatly from its throwback design, streamlined mechanics and pleasingly accessible gameplay. The Director’s Cut doesn’t make any fundamental changes to the core experience, but the inclusion of new stages and the reintroduction of co-op gameplay prove welcome additions to an already fantastic game. Purists might scoff at the relative lack of challenge and use of a health bar, but this is still a hardcore shooter at heart, one that is happy to look towards the past while ensuring that it keeps at least one eye on the future.

Raiden V remains a fantastic shooter, one that benefits greatly from its throwback design, streamlined mechanics and pleasingly accessible gameplay.