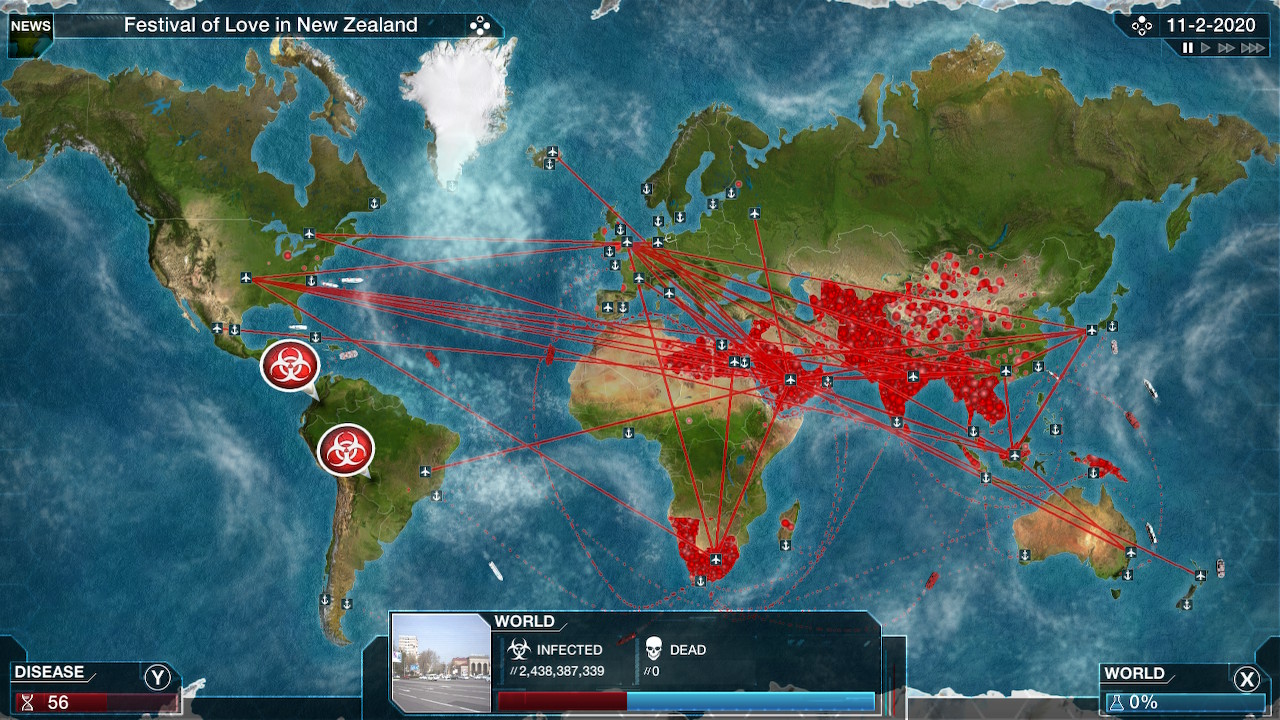 The vast majority of video games have some sort of element that involves killing bad guys or disposing of an opponent or their team; heck, even puzzle games are designed to kill time. Whether it be the last man standing in a Battle Royale or being on the winning side in a Team Deathmatch, most players can end up getting a handful of kills to contribute to their virtual glory on the battlefields of the console wars. Well, how does achieving a virtual kill-streak of hundreds, thousands, millions and even billions sound to you? It’s certainly something that is achievable with Ndemic Creation’s Plague Inc: Evolved as it infects a release upon the Nintendo Switch.

This strategy simulation tasks you with infecting the world with a deadly strain of disease or pathogen. Presented with a map of the world, your mission is to choose a country of origin and begin world domination with the infection of a ‘Patient Zero’ or just one person who resides within your chosen location. After naming your pathogen and infecting your unfortunate target, you watch on as the world goes about its business with shipping lanes and air routes, as well as news events that are as up-to-date as Brexit. As your creation begins to spread from person-to-person, the rate of infection is highlighted in red as it creeps across the country; eventually breaking borders to spread to neighbouring countries and with luck, across the whole of the globe.

However, your main objective here is to not infect the whole world, but to actually eradicate mankind through a variety of means. This can be achieved through a series of options that mutate your pathogen to allow it to become airborne transmitted or through blood, infect wildlife such as birds, livestock and mosquitoes and even create physical abnormalities from coughs to organ failures and even zombie madness to a delirium that sparks world events such as the onset of World War III. However, mutate your pathogen too soon or spread too quickly and the world’s population will catch on to your epidemic and begin formulating a strategy to prevent its spread and begin work on finding a cure. 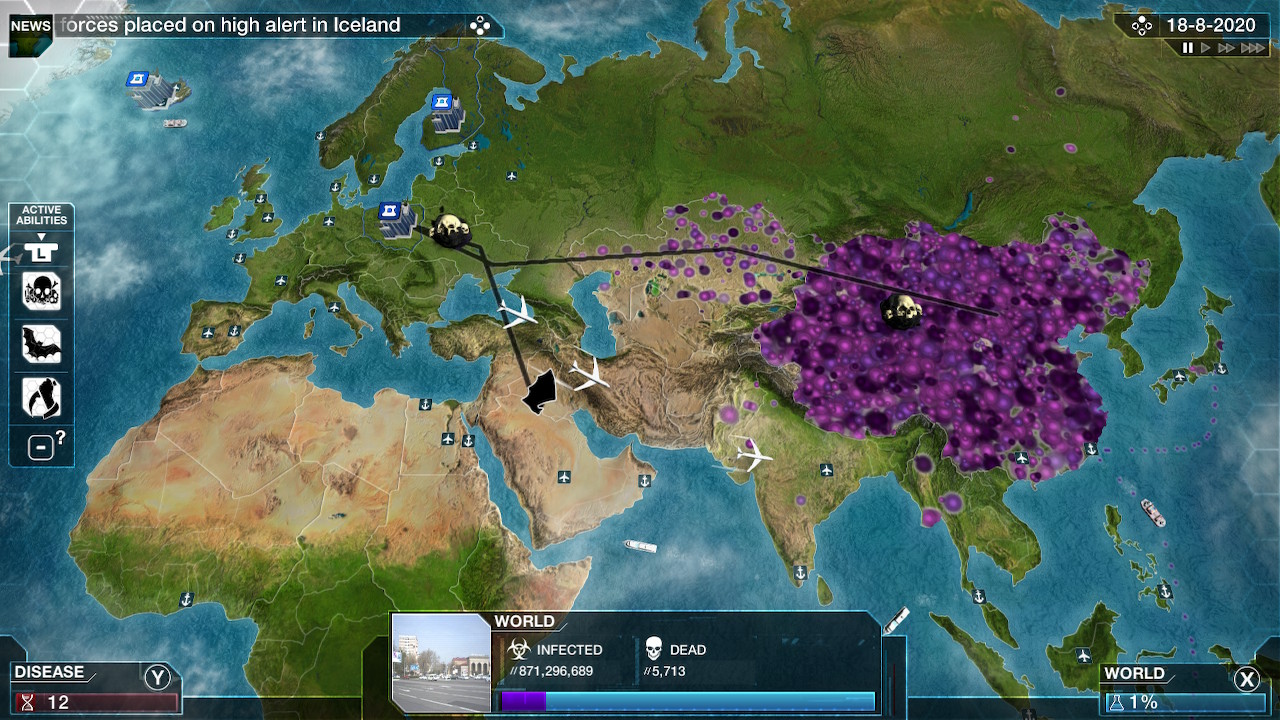 Countries can react to stop the spread, such as shutting off borders or pouring money into researching a way to combat your pathogen. By constantly evolving, you can slow the progress of research or find other ways of transmitting yourself until you can hopefully reach a point where you begin to kill off the inhabitants of certain countries, thus reducing their ability to fight you off and spread your horror around the world. In order to advance through mutations or slow human progress, a series of DNA, infection or research bubbles can appear around the world. By selecting and bursting each bubble, you gain mutation points in order to change the genetic build-up of your pathogen and reduce mankind’s ability to research a cure. Should you wipe the world of the human race then you win the game. However, should mankind find a cure and eradicate you from the planet, then its game over.

There’s a massive amount of scope within the game. Certain factors need to be taken into consideration in order to successfully obliterate the world. The environments of different countries need to be adapted to, such as temperatures, populations, ease of travel and use of livestock. You begin the game with a strain of bacteria, which can be quite hardy when it comes to these environmental factors, such as a resistance to temperature. By successfully completing your objective, you can then unlock further strains of pathogens with which to infect the world. Viruses can be unstable and temperamental, often mutating naturally or imploding on itself, Fungus are slower-moving spores and Parasites can eat away at their hosts. There are even further extremes such as Prions that can create neural states, Bio weapons that gain strength over time and Nanomachines that have escaped from a laboratory, yet are constantly monitored for a cure.

Each strain of pathogen behaves and reacts differently, forcing you rethink strategies, evolve and devolve specific traits and, in general, remain hidden from the mainstream until the time is right to strike the planet. You can destroy mankind through illness, organ failures, disease and even madness. Watching the world react to your creation can be a fun premise. Patience is the name of the game here though, as evolve to fast or spread to quick and mankind will work harder on finding a cure. You need to remain stealthy and bide your time, making each game a tense affair that can take some time to work through. However, you do have the ability to speed up time when faced with having to hibernate within your hosts until the time is right. 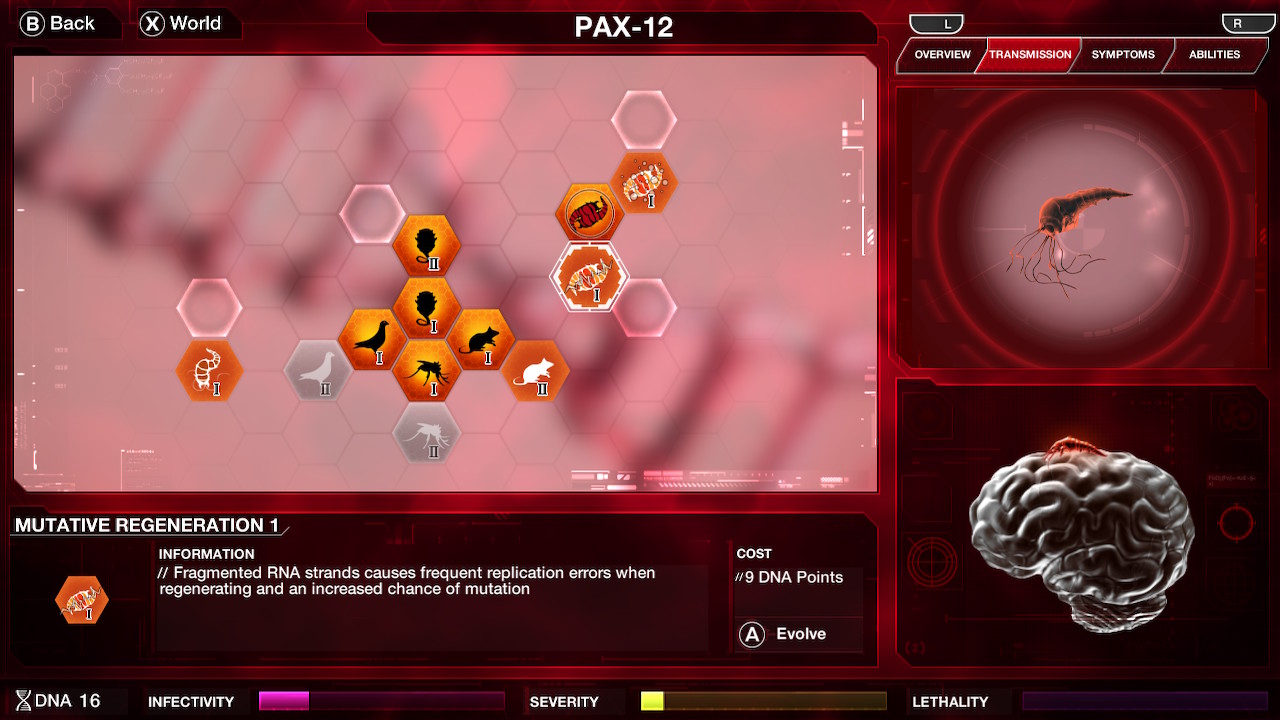 All-in-all, there are eleven different strains of pathogen to work through, as well as twenty-five different scenarios from an epidemic of Swine Flu to infecting the world during the grip of an Ice Age. However, the game also comes with a series of other game modes from a speed-run style of play in which you need to infect the world in as short as time as possible to a Mega-Brutal difficulty which will test the most strategic players amongst us. As well as these though, is the ability to play a variety of games through user-created scenarios from custom pathogens to worlds and scenarios. This brings the game a whole new level of playability and longevity that will keep you playing over the long-term.

Despite the majority of gameplay taking place on a single screen, there’s plenty of depth and strategic value to keep you invested. Watching your pathogen spread around the world, or keeping yourself hidden from the mainstream is riveting stuff and in some ways, quite exciting to pull off; especially when you achieve world domination and destroy all life on the planet. I couldn’t help but feel like I was some supervillain from a bond film as I strived to take over the world with my deadly strains of disease or toxic release of bio-weaponry; all of it monitored from my very own super-computer. It really does make you feel superior in what you achieve; especially with the game’s realistic world settings, news reports and haunting audio of a young girl singing the solemn tones of ‘Ring-a ring of Roses’.

Overall, Plague Inc: Evolved is a strategists dream with a variety of pathogens, scenarios and custom creations to work through. It’s certainly something different from the norm and all the more playable for it. It’s riveting, yet also haunting as you watch the world die before you from the creation of your own doing. With a constant evolution and devolution, struggles against finding a cure and a variety of symptoms, you’re constantly tested, but ultimately rewarded for your efforts. If you’ve ever had aspirations of taking over the world, or even creating a deadly pathogen and decimating the world of billions of people, then this is most definitely a game that will satisfy those cravings and the plus side, no humans will be harmed in the making of your doom.

Plague Inc: Evolved is a strategists dream with a variety of pathogens, scenarios and custom creations to work through. It’s certainly something different from the norm and all the more playable for it.