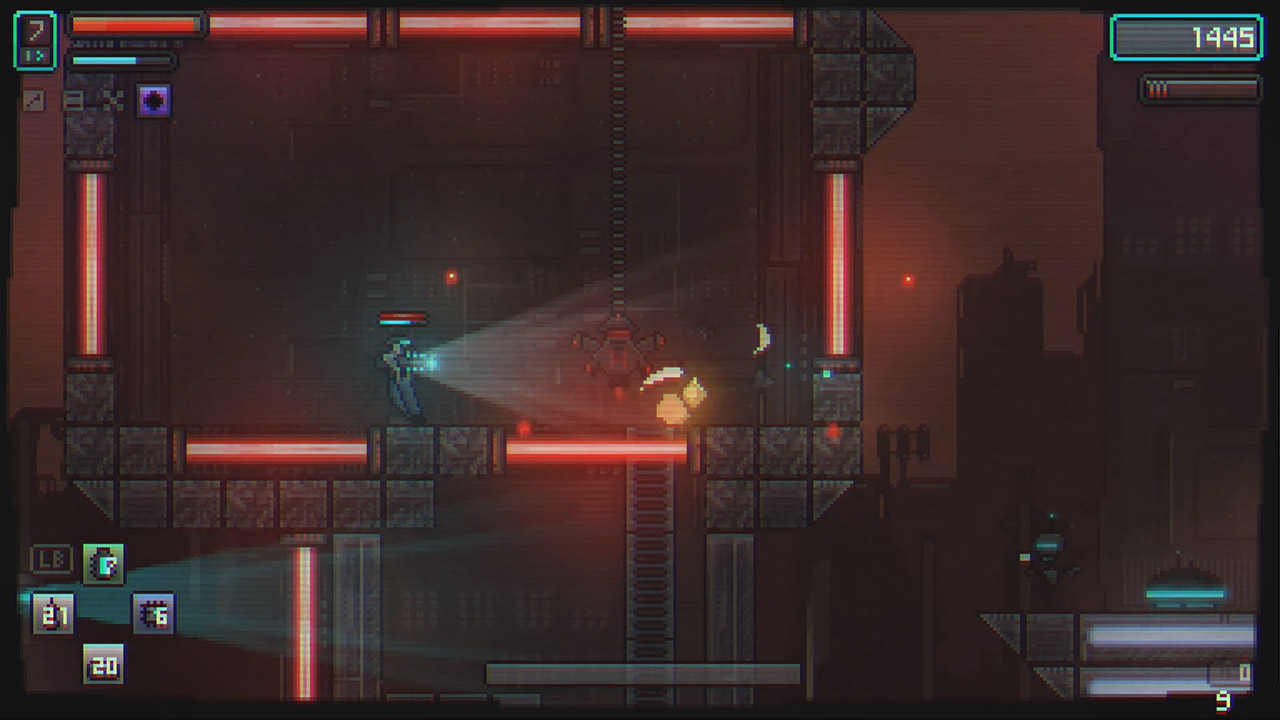 When it comes time for me to select games that I want to dump my time into, my criteria are broad but also pretty flexible. Anything that’s twin stick shooting usually gets at least a further look, and roguelites are pretty high on my list. Cyberpunk and dystopian themes are great, pixel art is a good point, and games that can be engaging and fun without clocking in at 20 hours or more are ideal (sorry, but I’ve grown to dislike any game that takes longer than two solid days of play to complete). But there is an important thing to remember when it comes to these games: execution. If you throw all the ingredients for a pizza into a stew pot and boil them, the result isn’t just unsatisfying, it’s downright disgusting (speaking from experience). So you can’t just provide the elements, you need to make sure they mix together well.

From an initial glance for anyone unfamiliar with PolarityFlow’s new game, Cryogear, it really seems to tick all the boxes that could make a good game great. It’s got a metrovania approach with a dynamic crafting and leveling system that allows you to customize your character however you’d like, and mold your character into what best suits your play style moving forward into the game. The dark and foreboding atmosphere, combined with the cyberpunk ideology and pixel art, create a game that’s light on install space and can perform well in terms of read/write and not tripping over itself to render and create enemies, bosses and item drops. Even the plot is pretty spot on. You play G43R, a replicant sort of android clone that’s been tasked with trying to discover the mystery of the Emperor AI, which is at the core of this dark, nightmarish world that you’ve been dropped into. After a couple of screens of tutorial and getting to know the general movement of things, you’re cut loose, allowed to explore multiple worlds and areas, discovering secrets and uplink computers to take back the cyber world and hopefully make a better place for everyone. 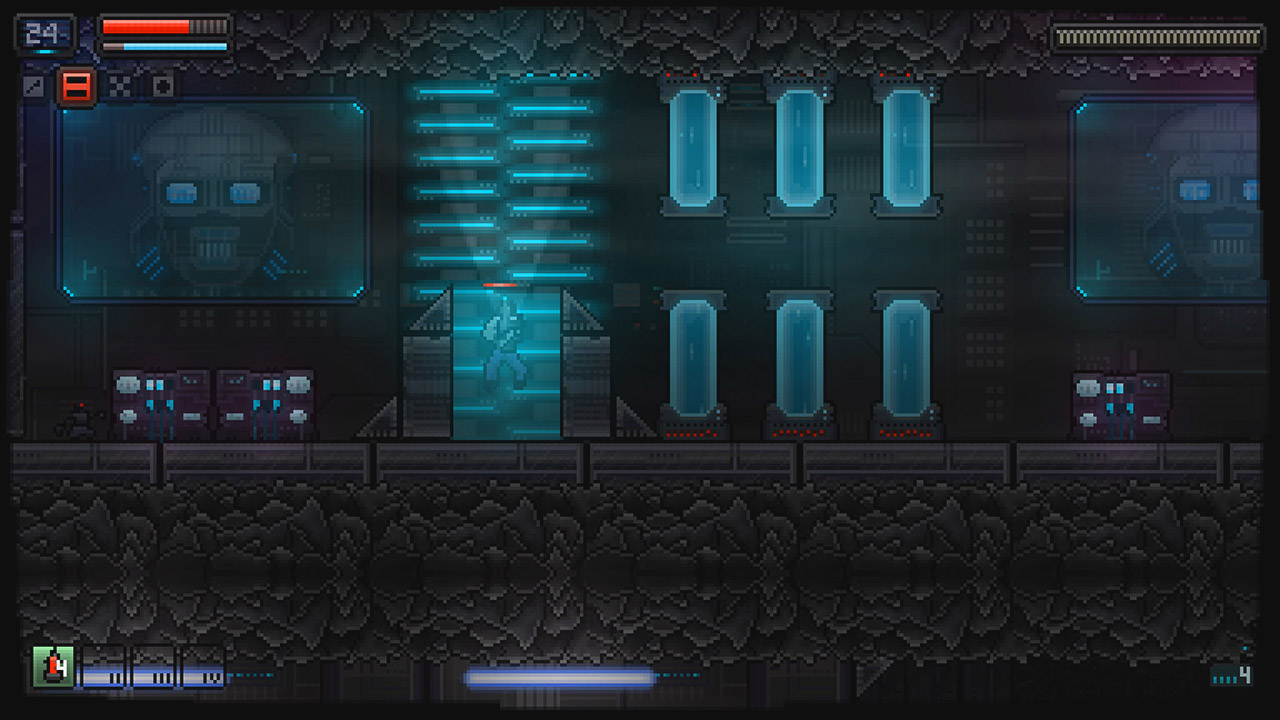 As mentioned, a lot of Cryogear is about exploration and upgrading. Being a clone and all, you can expect that your death has a bit of an impact but nothing significant: a new you is always waiting to be respawned at the checkpoints that you jack into. Dying, though, does drop a bit of stuff that you need to reclaim as soon as possible, because dying twice means the upgrade items and loot that you initially dropped disappears into the void. And you want to keep your inventory chock full of stuff, as, again, you get to unlock a lot of crafting ideas. From simple heal injections to full on weapon unlocks and upgrades, the crafting element is very unobtrusive but critical, as you can’t even finish the tutorial without collecting enough ingredients to make your first ranged weapon. Additionally, you’ll gain more and more points and bits from defeated enemies to upgrade both your base stats (strength, dexterity, etc) and a separate skill tree that moves however you’d like to progress. Focus your points on becoming a jack-of-all-guns and have those at the ready, or dump it all into your starting weapon and just crush enemies with a piece of rebar, throwing up a psychic shield to deflect energy bullets and occasionally doing some sweet psychic surfing to move between platforms.

There was a lot I liked about Cryogear. The presentation of the game was spot on, with areas drenched in neon, cloaked in shadow and all forms of grimy, broken spectrums in between. The game really captures this future of totalitarian ruling and robots being the go-to for guards, weapons and defenders. It’s further underscored by a frankly gorgeous soundtrack that captures ideas of industrial techno and chippy ambience, really driving the player and putting them into the cockpit of G43R without a lot of questions about what you’re doing. That’s always a strong suit of a game: not making players wonder why they’re doing what they’re doing, just allowing them to dive in and start smashing things.

Additionally, when the game is on, it’s really on. Cryogear prides itself on being able to balance all those aforementioned elements without overwhelming a player, and, for the most part, it succeeds. You get reminders when you respawn or enter a new area about being able to upgrade, you can sort of figure what kind of weapon works best for you (I preferred melee and the original blaster to things like the charger or lancer), and you never feel like you’re caught off guard or are at a loss for what to do next. Despite the open environment and the ability to choose your own path, you never get lost or are disconnected from what to do next. From the junkyards to the VR worlds to the depths of the streets, Cryogear keeps you moving along at a good clip, never out of steam and always ready to bring you more. Granted, there were a couple of bosses that were surprisingly difficult, but that was more because I didn’t change up my gameplay style until I absolutely needed to. For the most part, I just whacked away, found a healing station, and repeated until I had murdered as much as I could in a single area. 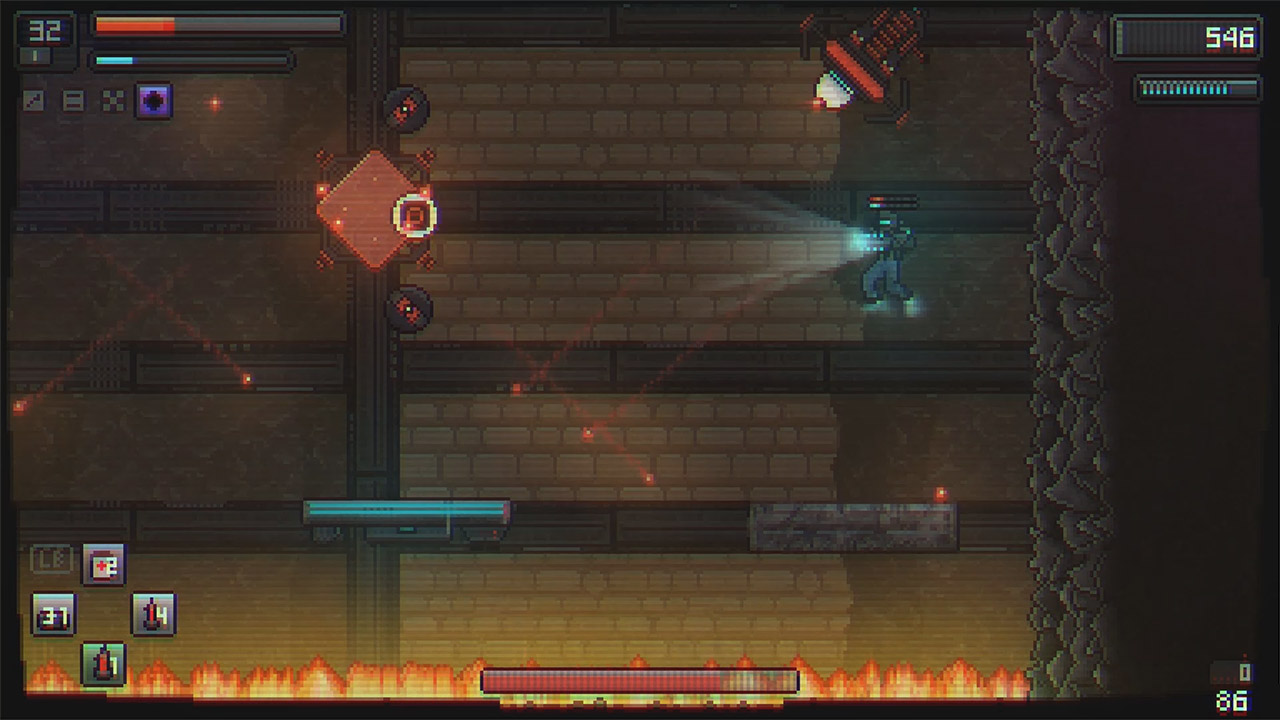 On the other hand, there were moments of clunkiness that turned me off a bit from the game. Cryogear doesn’t always handle with finesse at the beginning, and that’s more of a logistical thing than a performance issue on the Switch. Several times I felt like I was killed by environmental hazards (buzzsaws, crushing presses) even though, from my vantage, I was well out of the way. When you die from enemy encounters, whatever, you can respawn, be more careful, and get your stuff back. If you get killed because you think the hitbox is off on a trap, though, who’s to say that you won’t just die again and again? This happened a couple of times throughout my play, and it always frustrated me into turning off the game and forcing it to reload at my last save without the penalty hanging over my head. A cheap ploy, I know, but it worked.

PolarityFlow has done, for the most part, a solid job of bringing a unique and interesting title onto the Switch, and it should attract a fair amount of attention. For all my grievances regarding controls, those can easily be conquered by simply staying safe and not risking too much until you’ve unlocked an appropriate number of blueprints and skills on the tree. It really can be approached in several different ways, and my fascination with the style and music are what kept me moving forward in spite of being on vacation and having opportunities to relax and NOT play video games (perish the thought). If you’re looking for something that evokes the Super Metroid mentality with a bit more customization (and a slightly shorter playthrough), Cryogear is a pretty great place to go.

Live. Die. Learn. Repeat. Cryogear has a great world to explore and some solid mechanics as long as you can get through the initial vices.