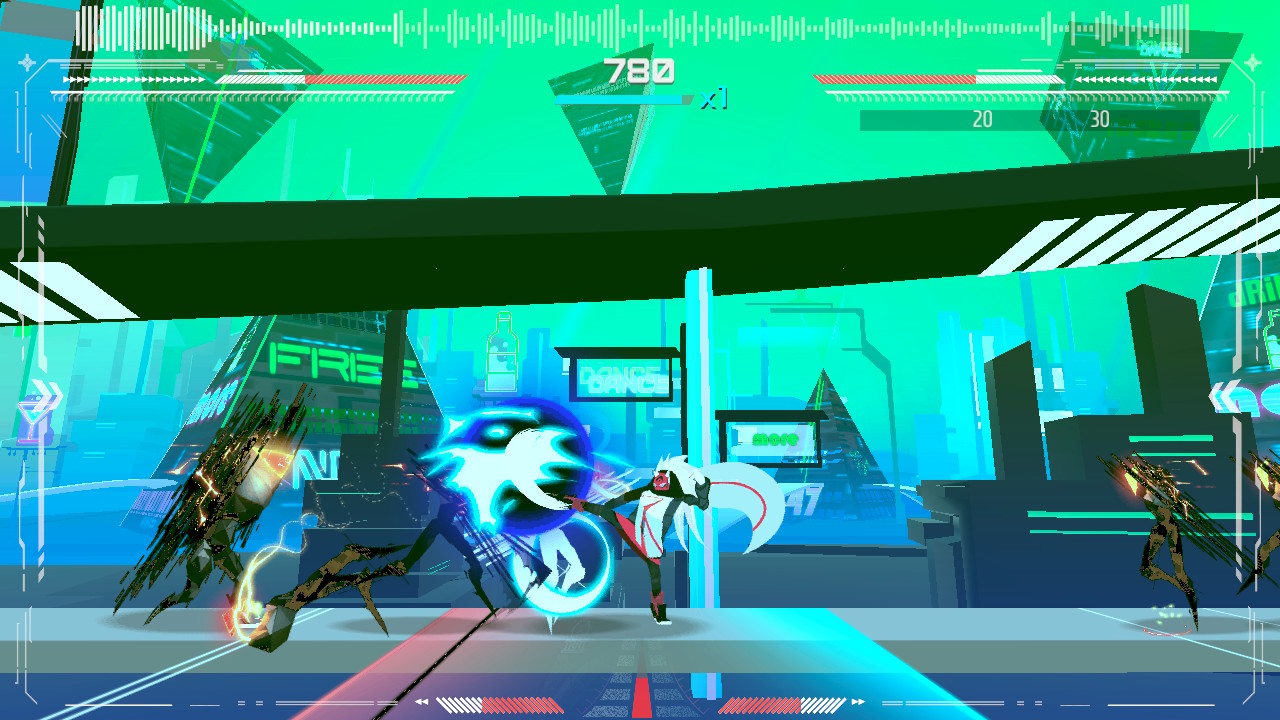 Forever Entertainment hasn’t always been able to grab the best titles to bring to the Nintendo Switch, but I admire their pluckiness and attention to making sure each and every indie game, no matter how small or how narrow the audience is, has an opportunity for a console port. After all, who’s to say what is and isn’t someone’s favorite game? I’m not a huge fan of H.O.G. adventures, but someone’s buying them time after time and doing ISpy puzzles set against overly dramatic storylines. When this newest title appeared on the radar, I was intrigued, as a good rhythm game, combined with interesting premises or ideas, tend to really reflect well on me. Sadly, some technical flaws and a bit of a missing game element keep TERRORHYTHM (T.R.R.T.) from achieving the greatness for which it angles.

Set in the 25th century, TERRORHYTHM is a sort of crossover between a dystopian landscape, a cyberpunk storyline and some heavily kabuki inspired ideas. The faceless Government has deemed any and all music to be offensive and vile, and so the world has descended into darkness and silence. But there are those who still remember the beats and notes of life, and will take up arms in any way possible to fight back against the oppressive regimes and keep the freedom of sound going. What’s really interesting is that this premise makes me feel like the music should all be super feel good and upbeat, because, you know, you’re fighting for the livelihood of humans everywhere. Instead, a vast majority of the soundtrack is some really heavy, dark techno and synth music, which seems somehow inappropriate for this particular storyline. Still, the soundtrack bumps (we’ll get more into that later), so everything is mostly forgiven in terms of setting and setup.

The gameplay of TERRORHYTHM is a song-by-song level selection in which the music starts playing and you gotta punch the hell out of all the robots that are coming to silence you and make the music stop. Very akin to certain other games in which you merely hit as the enemies come, there’s a cool sense of balance and focus within TERRORHYTHM. Besides punching left and right, you also have the ability to increase the field of where you can strike, widening slightly on either side with the push of the B button, though this field collapses as you successfully land punches (L or R). Additionally, you can take a beat to push the X button and create a charged hit, which can take care of the really large robots with a single shot instead of needing to always follow through with two hits. This can be invaluable when you get to higher difficulty levels or are dealing with just a massive wave of robots. Additionally, there are some robots that will mess you up if you try to charge hit them, so you can’t just always rely on the same old song and dance every time. 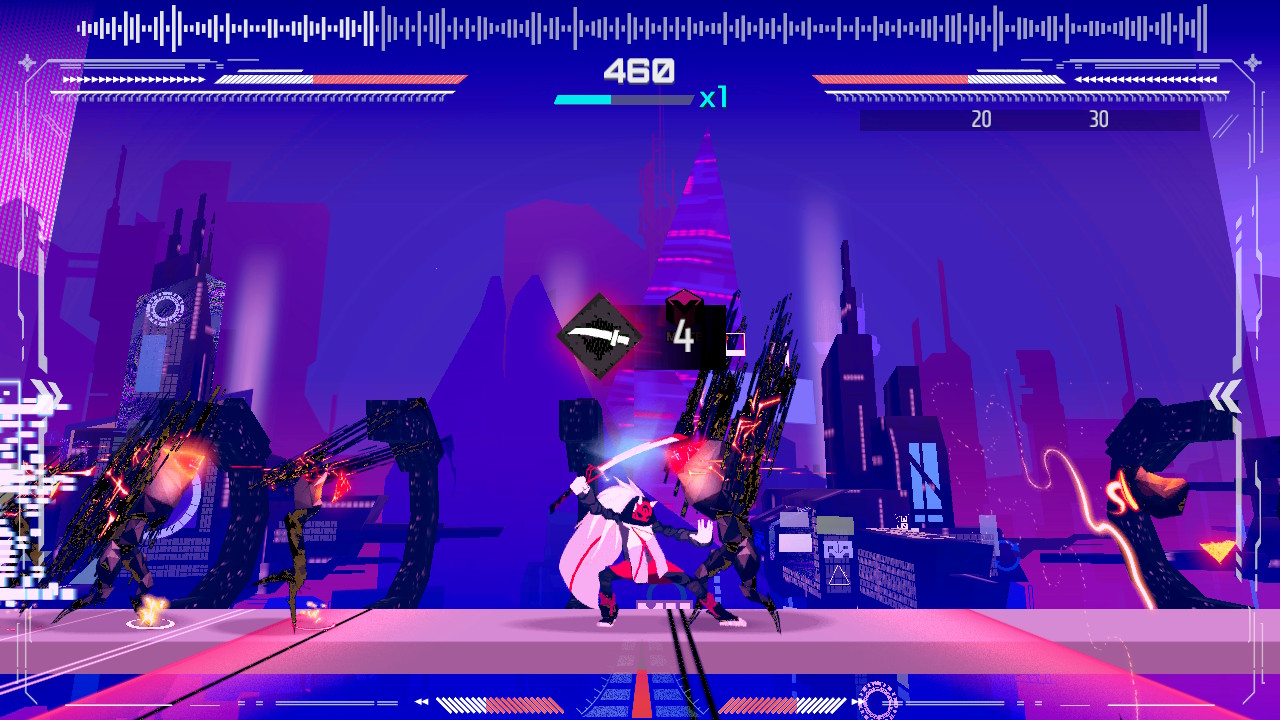 In theory, TERRORHYTHM is a pretty fun game, with a fresh take on the rhythm aspect of gaming as well as a solid platform of how to make it more interesting. The game provides an ample array of enemies, from standard grunts to shielded tanks to robots that actually teleport around with every hit, forcing you to be quick on your fingers to keep them from overtaking you. Maintaining a constant ebb and flow with expanding your field, nailing the shot, charging a hit and making sure you keep the punches coming keeps the experience engaging, and then the random power ups make for an exciting bonus. Occasionally, you’ll get weapons (with limited uses) from enemies, like katanas, throwing discs and, my personal favorite, a giant reaper scythe that looks cool as hell as you slice down enemies. There were a couple of times where the game got a bit wonky and started generating power ups too fast, causing things to stack oddly or to overtake a weapon before I was done with it, so that was a minor inconvenience. Oh yea, the power ups come from hitting enemies, so it’s not like you can avoid picking one up. Grab everything or get a free shot to the chops.

The visual presentation of TERRORHYTHM is bang up, and that is something that cannot be overstated. While I never saw anything that shook me to my core or even implied a real “horror” element (am I misunderstanding the title?), there was a lot of cool design in the different background settings, and our protagonist looks the role with the music. Again, fighting against forced stillness and generating music in celebration of life seems to imply pop music, but our masked, wigged, kickass protagonist thumps and moves along with the dark and heavy tunes just as grimly and determinedly as you could hope for. There’s a real presence with him on the screen, and you know he’s the star of this awful, bleak show that you want to perform your absolute best in. Not only are the harder difficulty levels an absolute nightmare (more enemies, harder hits, fewer chances to not die), the variety of appearances with NPCs, items and hit combos are something to be reckoned with, and require a bit of trial and error, especially with later stages. 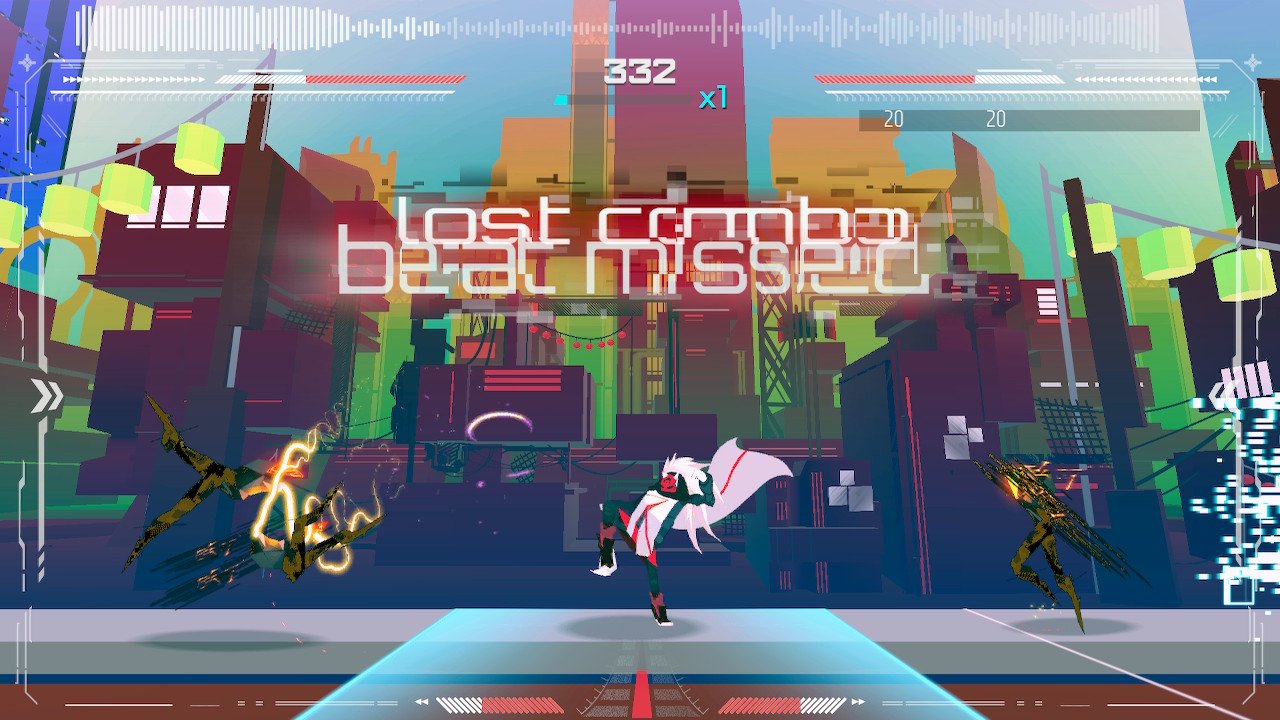 So, which so much positive about TERRORHYTHM, why the lower score? Unfortunately, the port onto the Switch has a few inherent flaws, and this really decreases the QOL that the game sorely needs. When you get into a lot of the songs, there will be, on multiple occasions, skips and lag. Not so much that it kills the gameplay entirely, but it can really mess things up for players going for solid combos and trying to get a perfect streak throughout. When enemies begin appearing on half beats (which occurs early on), you can really get thrown off due to input lag and the fact that there appears to be some serious sound latency issues. My ears aren’t as great as they used to be, but the difference between when the beat hit and when the signal flashed on the screen (during calibration) was almost .8 off. That’s borderline insane to me, and I can’t tell if that’s a software issue or a hardware issue (new MicroSD card coming soon). But, still, the rhythm was so off from the visual cues that I was disoriented and couldn’t move onto higher difficulties without basically forsaking the music and only watching the screen for when I needed to attack.

Additionally, and this isn’t a slight against EvilCoGames (the original creators), but one of the biggest draws and praises for TERRORHYTHM is the ability to import your own songs. Much like Double Kick Heroes, being able to bring in your own tracks really makes for a cool experience, and being able to add some other music (MASKED, anyone?) would have just been a great addition to the already well toned soundtrack within the game. Sadly, Nintendo still isn’t allowing the import of content in such a fashion, and so all the great fan-created levels for TERRORHYTHM aren’t available for Switch players. Again, this isn’t anything that affects the overall score of my review, but it is important to point out and to lament as Nintendo continues to keep the oddest things behind high gates.

TERRORHYTHM has a great vision and, for a lot of it, solid execution. A good variety of tracks, plenty of versatility in the levels and performance, and enough of a grab for people to continue replaying for higher scores both locally and potentially against friends online. But those latency issues are killer for me, and I can’t believe I’ll be the only one to experience such a discrepancy between what I hear, what I see and what button I press. I’ll gladly continue to revisit the game, and fingers are crossed for a performance patch in the not-too-distant future. Players who want to support the game and enjoy a different, tonal take on rhythm games that’s somehow lighter than Thumper while still being dark should take a visit, but just be warned that installing to the internal memory might be the only way.

An engaging and edgy rhythm fighter, TERRORHYTHM delivers plenty of great ideas, but slips in actual performance on the Switch.