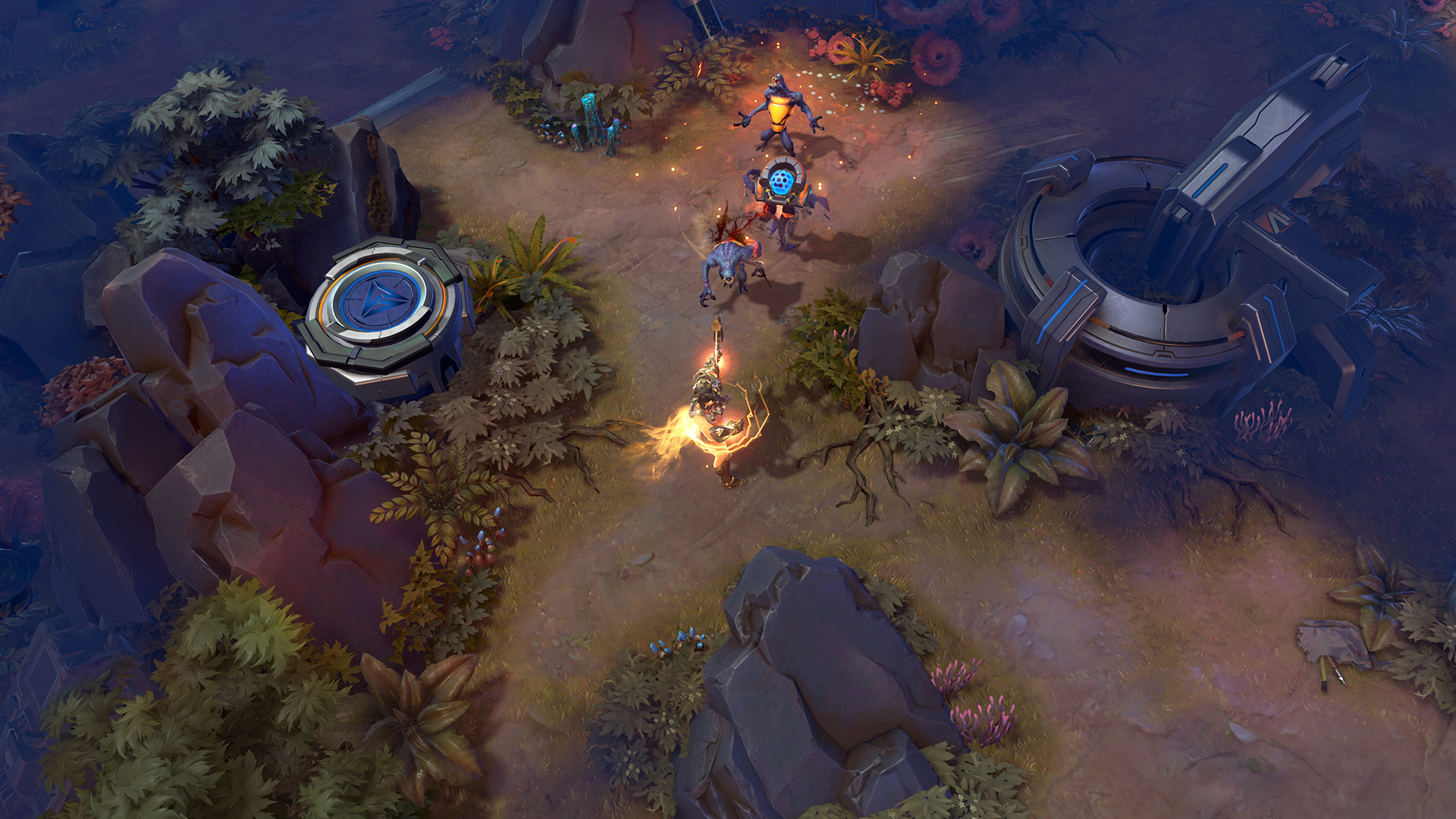 Games have certainly seen a wave of new and exciting genres bloom over the past decade, from the short-lived 4-v-1 gimmick to the recent influx of battle royale games. But MOBAs have remained stable and comfortable through it all, and every now and then a developer takes a chance by stoking the steady embers of the genre with the goal of reigniting the flame.

Rampage Games’ new controller-only MOBA aims to ignite that flame while bringing accessibility to the forefront. The fact that it will launch later on PC with this same controller-only caveat has many concerned, but this focus on evening the playing field for eventual cross-play is one of a few reasons that make Genesis feel like a game worth investing in.

You wouldn’t be looked at funny for mentioning the striking similarities between Genesis and genre king, League of Legends. But it’s clear Rampage Games intentionally designed the game this way to be strongly familiar to MOBA gamers, striking a perfect balance of tasteful imitation and a unique, sci-fi aesthetic. And with a launch roster of 27 charming and likable characters with a variety of playstyles, there’s plenty to love.

In typical MOBA fashion, you’re tasked with gaining experience, gold, and skills as your team spreads across multiple lanes to push back creeps (enemy minions), destroy a series of towers, and reach the enemies’ base to win. Everything works as you’re used to, with two players going to the bottom lane, one person going mid, and another going top. You can cross your fingers that someone will jungle, though it’s really a matter of chance. Luckily, as important as the jungle is at higher levels of play, casual teams at lower levels seem to do fine with or without a dedicated jungler, at least as long as individual laners hop over and hit some of the camps themselves periodically. 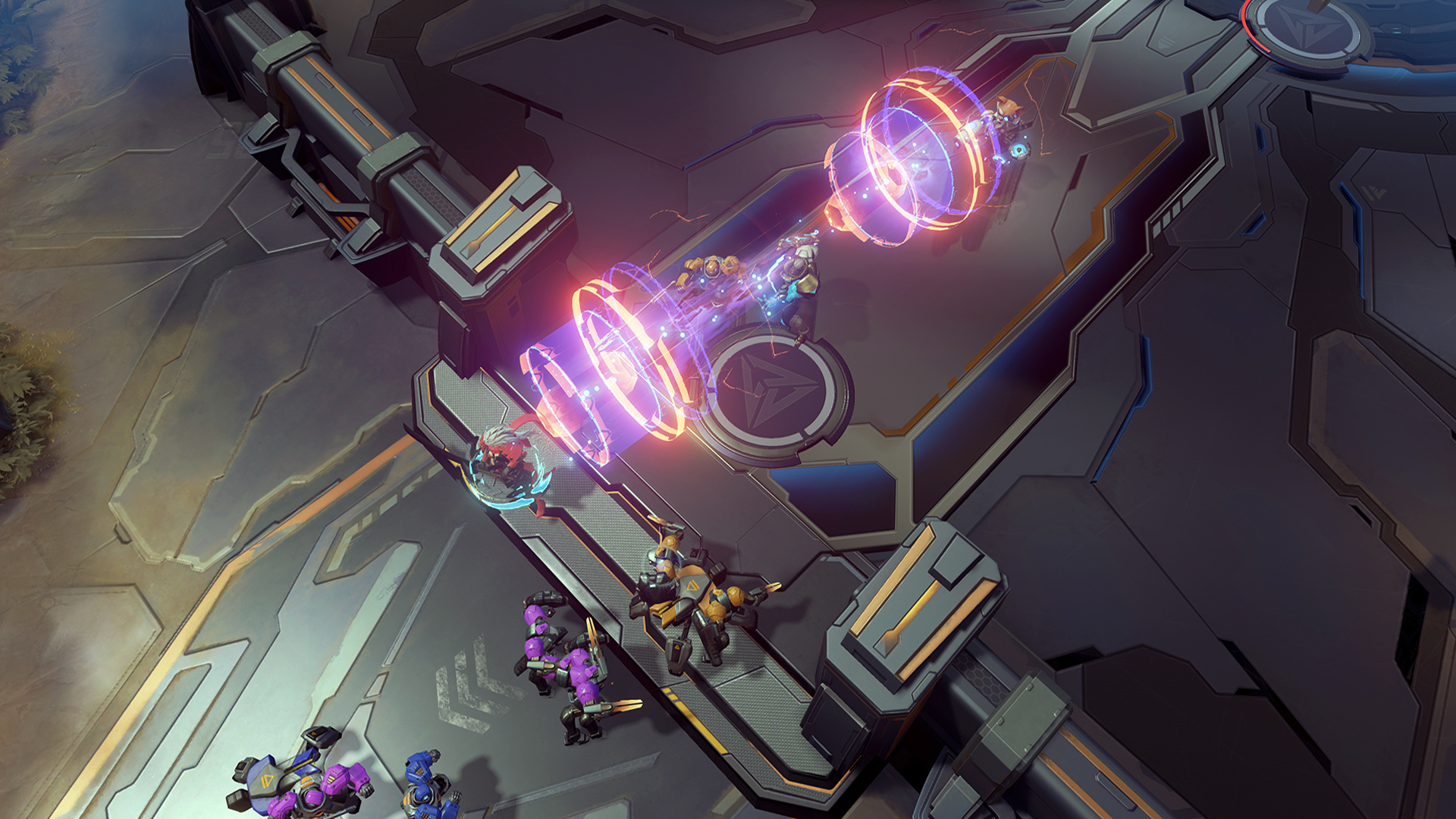 Genesis sets itself apart from many other MOBAs by adding a much-appreciated additional win condition of 60 kills. This welcomed addition means that games are unlikely to drag on for hours as turtlers are forced out of their bases and into the field, and the added sense of pressure keeps things moving along briskly. This feature is a double-edged sword though, at least at lower level play, as some teams tend to play for kills over objectives from the outset of the match. This sometimes leads to games feeling more like casual deathmatch than a true MOBA experience. It never bothered me, but I also come from a background of playing Smite’s Joust mode, which is notorious for this kind of play. Your mileage may vary.

The focus on accessibility means that the actual gameplay remains easy to pick up but difficult to master. New players will adapt easily to the game’s automated item buying and skill leveling, and advanced players are free to make those choices on their own as they see fit. Skills are assigned to the controller’s four trigger buttons for efficiency, and teleporting to base is achieved by clicking the right stick and selecting triangle. Additionally, Genesis lets you teleport to any tower in the game on a cooldown, allowing you to make strategic placement choices for teamfights and split pushing.

A priority system assigns basic attacks and skills to certain targets, changed with a click of the left stick. This is perhaps the aspect of Genesis that causes me the most frustration during intense enemy encounters. Forgetting to cycle through the priorities has cost me multiple kills as my character’s abilities hit a creep rather than an escaping enemy. It’s an understandable workaround in the move to full controller gameplay, but it’s nevertheless an irritating quirk in an otherwise engaging game.

Genesis boasts an attractive, visually-appealing character roster full of typical archetypes, and they’re all viable in their own right. I never felt at a massive disadvantage using one character over another, and a useful difficulty rating gives new players a basic understanding of which characters will offer them the appropriate level of challenge. Learning each character’s unique gameplay mechanics has thus far made for a rewarding experience, and finding a main might prove harder than I expected. 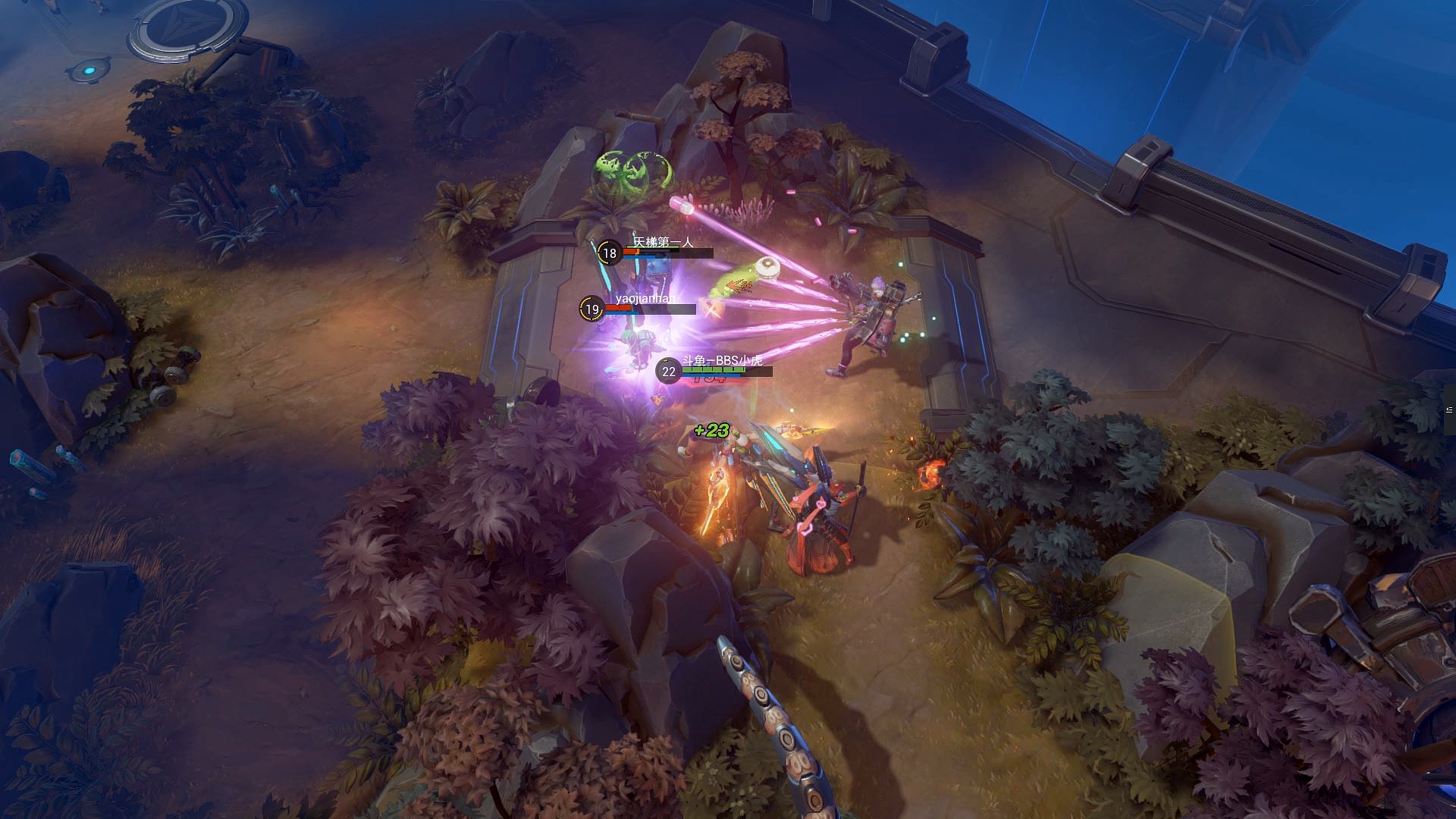 Less exciting is the game’s tacked-on campaign mode that sends waves of boring enemies at you alongside a bland, convoluted storyline about humans and aliens working together to go fight… Something. You can obtain gear for use exclusively in this mode, giving it an RPG-like progression, but it’s a truly forgettable element and doesn’t really offer anything else beyond some microtransaction currency.

You didn’t think you’d get a shiny new MOBA without microtransactions, did you? They are aplenty in Genesis, running the usual gamut of skins, kill and level up effects, and other unnecessary cosmetics, and it’s admittedly fun to get a new item from a chest or by completing one of the game’s copious amount of in-game objectives. But unfortunately, the game suffers from an overabundance of confusing types of currency that are all earned or bought individually to unlock things unique to each type. Does that sound a bit confusing? I’m still completely lost, and I honestly just don’t care to figure it all out.

Even worse is that the primary premium currency known as “energy credits” can only be bought in predetermined increments. Since some of the pricing for things like character packs are purposefully designed to force you to purchase more than you actually need, things start to feel exploitative very quickly. Most of the characters aren’t unlocked from the beginning, and unlocking them all absolutely requires using the aforementioned plethora of unique currencies. I lucked up with gaining access to all of them for review purposes, but if I hadn’t, I think the lack of easy access to the full character roster would’ve have dampened my enjoyment of the game quite a lot.

Ultimately, Genesis is a fun controller-only MOBA that makes a handful of interesting changes to the genre’s core formula. Its fantastic cast of characters, balanced gameplay, and accessibility make it stand out, but its tacked-on campaign and confusing, exploitative microtransactions are a bummer. You won’t find a better top-down MOBA on consoles, however, and it’s free to try, so there’s really no reason for fans of the genre to pass this one up.

Genesis is a fun controller-only MOBA that makes a handful of interesting changes to the genre’s core formula.