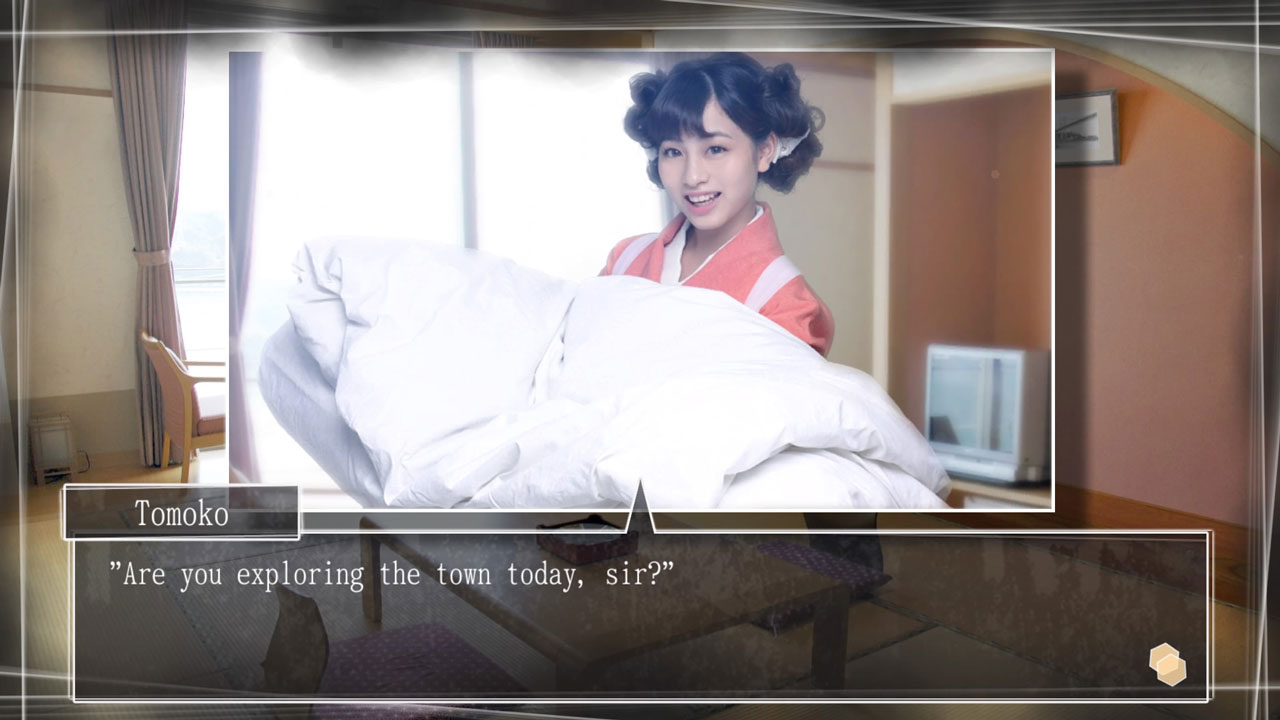 The idea of a pen pal is one that’s rapidly becoming archaic, but there’s still a sense of traditional excitement and connection that comes along with it. Though people around the world can reach out, create bonds and form lasting relationships with almost no delay between correspondence, the intimacy and personalization of hand written letters is special, and why the art form hasn’t totally died out. Having to really weigh what you want to say to someone whom you may or may not have ever met, knowing that these words, these strokes, are the only things that another person will think about regarding you for days, weeks or even months…well, the implications are fantastically large. The gravity of a pen pal and how it can create such a strong impression is what makes the emotional connection of Root Letter: Last Answer believable, and allow players to connect to a game where things can become unbelievable almost immediately. Still, the romantic atmosphere can’t always cover up the very apparent stuttering missteps of this medium length investigative visual novel.

In Root Letter: Last Answer, you play a character who is clearly in their 30s, who is waxing nostalgic about a pen pal, Fumino Aya, whom they fell in love with some fifteen years ago. While cleaning up, you realize there’s a letter that you never read for one reason or another, and it’s an admission of guilt about, of all things, killing someone. At this point, you’re so intrigued and disturbed by it all that you need to immediately drop everything you’re doing and go to the hometown of Aya to figure out what the hell that’s all about. Upon arrival, it takes mere moments before you find out that Aya is dead, she died twenty five years ago, or approximately ten years before you even received your first letter. Given that none of this makes a lick of goddamn sense, you resolve to not leave this part of the world until you have all the damn answers as to what is going on. Also, I mean, you’ve never visited Shimane Prefecture before, and this is yet another visual novel that acts like some kind of travel brochure for a lesser known area of Japan, so might as well drink in all the sights and sounds. Honestly, the setup for this story is so insane I’m surprised that anyone ever signed off on it being created, but it does lead to a decent, medium length story with more than a few twists and turns in the plot. PQube is doing a great job of bringing a solid stable of visual novels to the Switch, so, even when something feels bizarre initially, I just strap in and see where it takes us. 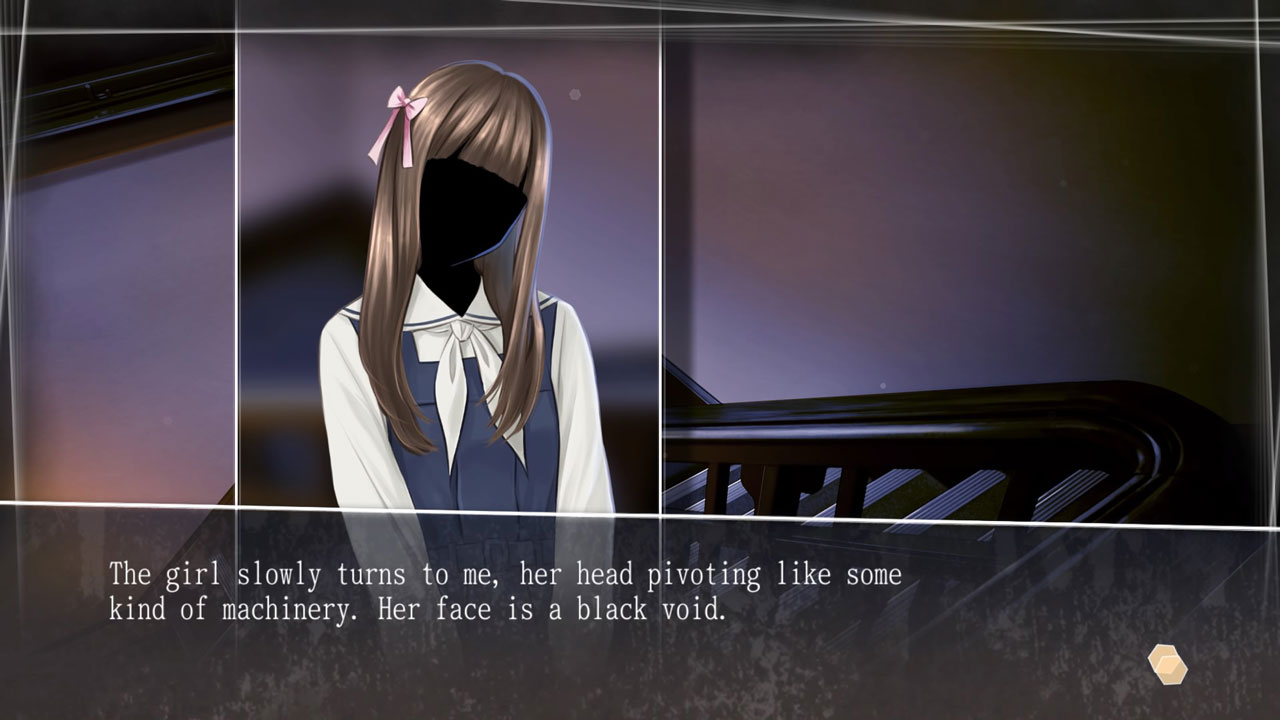 Root Letter: Last Answer combines several elements of investigation and consideration into unraveling the mystery of Aya, but they aren’t nearly as invasive as other recent visual novels. You have to look around at the different scenes and moments of where you’ve wandered into within Shimane, but there’s no minute detail to comb through in order to find the correct element to interact with: most of the time, you just interact with SOMETHING and it’ll advance the plotline. You have a couple of tries to get engaged with different characters in a sort of “timed conversation” mode, where the correct response curries favor and gets NPCs to deliver responses and reactions that move things the way you want them to. Your inventory will slowly fill up and deplete with evidence, informational artifacts and different accouterments, but you never get too bogged down with held items. Whenever you feel like you’re not sure what to do next, you have the ability to “Think,” which gives you a straight underhanded-pitch as to what you should do next.

Probably the most intriguing part of the game for me (and what brought me back for a couple of attempts) is the letters that your character shared with Aya. Not only does it give a voice to the deceased and allow you to better imagine what the burgeoning relationship might have sounded like, it’s a directional tool to shape how the game moves forward and changes the tone of things dramatically. The player has to remember a bit about what was said in the letters as you auto draft your own responses from the past, trying to figure out your dynamic with Aya and how the two of you shared information and personal traits. These letters, more than anything else, seem to assist in shaping the ending you receive, of which there are MANY. Seriously, I’m glad there’s a dedicated, consistent save system to Root Letter: Last Answer, because any one of several choices can drastically change the outcome to this mysterious tale of lost loved ones, deadly secrets, murderous mistakes and trying to right the wrongs from the past. At least the letter checkpoints are interesting enough to keep things moving forward when you seem to run out of steam, which, strangely, seems to happen a lot. 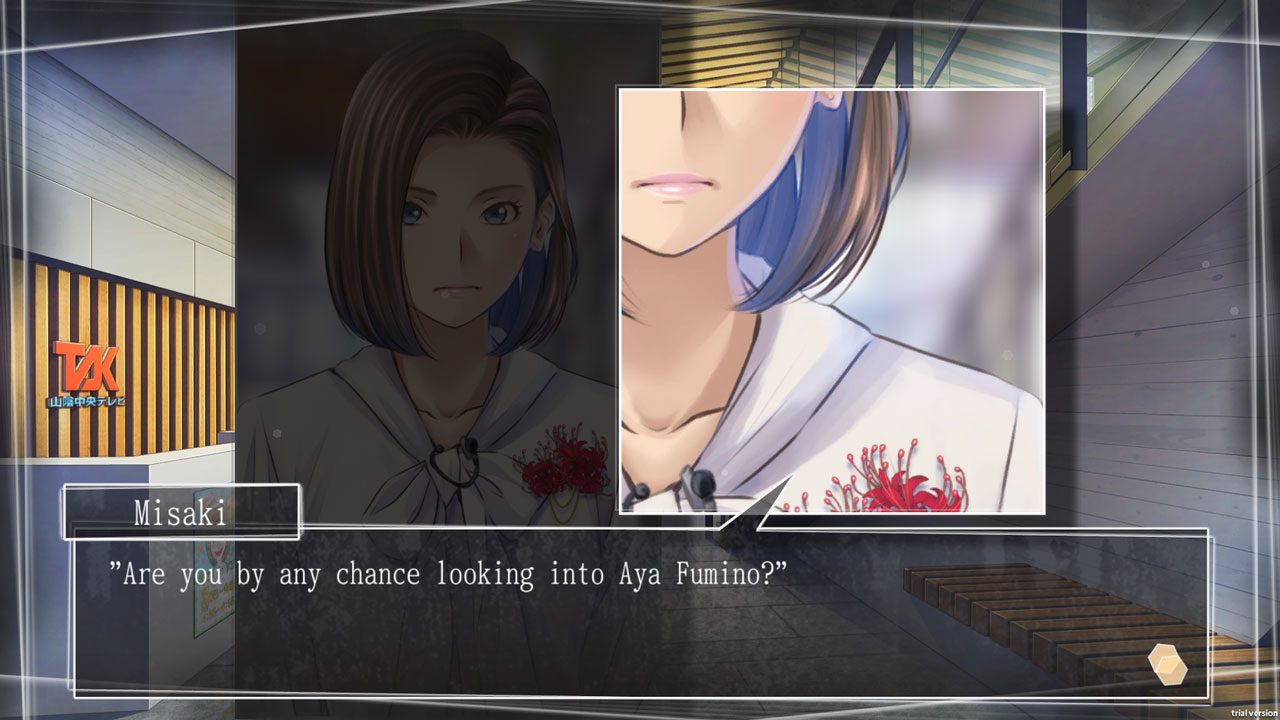 Root Letter: Last Answer is in a weird spot in terms of visual novels, and I’m not sure if that’s a positive thing. On the one hand, the main storyline is arguably shorter than several I’ve played recently (CLANNAD, World End Syndrome), so you can get to finding out at least a couple of endings in the time it would take for certain single endings in other games. However, you’ll still need at least a few tries through (and possibly a guide) to reach the “true” ending, so be prepared for a few days worth of playing. The way the plot unfolds is also a bit wonky in terms of timing: even when things are dire and seem pressing, there’s a drag to it all, a very off-handed sort of “well, if we must” vibe to it all. The player literally drops everything in their life the instant they find the “lost” letter from Aya, rushes to Shimane Prefecture, and then just wastes like three or four days sightseeing and sort of investigating things. You get redirected back to spots as like a jumping off point, but there isn’t always area-unique events that come from it. When you go back to the spot where Aya’s house used to be, you might get a conversation or revelation that could have occurred anywhere on the map. When you go to interview one of her friends at the TV station, you just sit in the lobby for a WHILE. I thought the game had crashed and I was about to force quit when things finally started moving again. It was really disjointed, so I’m thankful there were plenty of times where the plot did rush ahead with compelling dialogue to keep me on board.

Speaking of which, the “Last Answer” edition of Root Letter contains something that I haven’t seen in a visual novel before: live action transition. Kadokawa Games felt strongly enough about their title that, not only did they add new scenes and endings, but they also used actors, actresses and locations to do a shot-for-shot remake of the game that exists right along side the original.  The end result is …interesting. There was a really good scout on hand to find people who matched the animated characters, with the effect sometimes being almost unnervingly accurate. Hearing and seeing the game’s storyline carried out by actual people also seems to legitimize how intriguing it truly is, and I definitely recommend that players at least give it a shot for different scenes. I wish there had been an option in the smartphone menu to toggle it on and off at will (much like the updated artwork for Higurashi) instead of exiting to the main menu, swapping modes, and going back in. Seeing locations and designs side-by-side would have been even cooler, but I still think that players should take the time and observe the game in two different modes. You can change it within the same save file, so don’t worry about needing to run two playthroughs at the same time.

When all is said and done, it’s the presentation, not necessarily the substance, of Root Letter: Last Answer that keeps me on board and recommends it. The story is special enough, but the pacing and certain overdone tropes makes it tiresome at points. The voice acting is good, and the physical character acting of the men, women and children who participated in the redux is commendable, almost to the point that I wouldn’t mind seeing a drama based on the game. It did a good job of making me turn the pages, and it also made me note about visiting Shimane Prefecture if I ever head back over to Japan. This isn’t going to be the visual novel to convert skeptics, but it’ll keep the fire going for the fans and the denizens of the Switch who continue to wave the banner for the off-beat titles on the hybrid console that could.

Friendship, affection, secrets and shame: all of these deep and sometimes dark elements will keep you guessing in this mysterious visual novel.