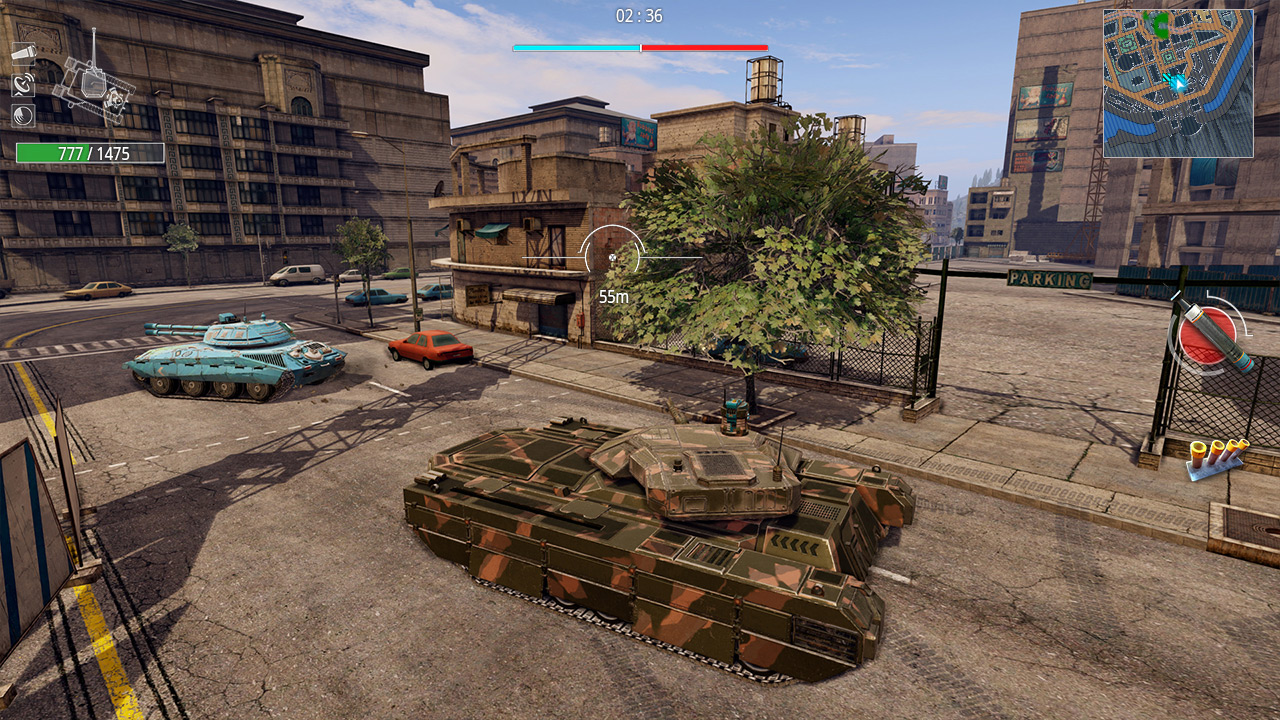 When it comes to combat or warfare simulations on the Nintendo Switch, its genre can feel a little thin with boots on the ground. However, the series of titles from Atypical Games do usually provide enough ammunition to stave that crave. From combat flight simulators to armoured warfare, their variety of different styles within the battlefields of combat software holds enough to ensure that pilot or commander in me is duly bullet-ridden with high values of gameplay and content within each of their titles. Their latest release, following on from the success of Battle Supremacy, comes in the form of Battle Supremacy – Ground Assault as it squarely aims down the sights to fire a release upon the Nintendo Switch.

Whereby the previous title in the series, Battle Supremacy focused on tank warfare from the era of the Second World War, this new title brings its combat bang-up-to-date and even further into the future with a more, modern take on tank warfare. However, this game has increased its arsenal and produces a bigger bang with larger environments, realistic weather effects and the ace card in its deck, the ability to design and upgrade your very own tank through card collecting to add a touch of personalisation to the proceedings. As with most of Atypical Games’ titles, there’s also a wealth of content and game modes, as well as the option of taking the fight online, to ensure it stays on track with long-term appeal.

At its core, this is primarily a tank warfare simulation, but one that is presented in an arcade-style. By that I mean there’s no intricacies of control or first-person views. However, in terms of presenting tank warfare, this is a game that excels on that front; whatever mode of game you choose to play. An expansive single-player campaign follows a story of a post-apocalyptic world that has been ravaged by an AI that deemed mankind expendable. In order to eradicate us, its enemy, the AI has built a formidable army of militarised tanks. With an all-out war to fight for survival, mankind has brought together all the top warfare manufacturers of the world to build an army to match the firepower of the AI and its now up to you to save the day and repel the ongoing advances of the artificial intelligence. 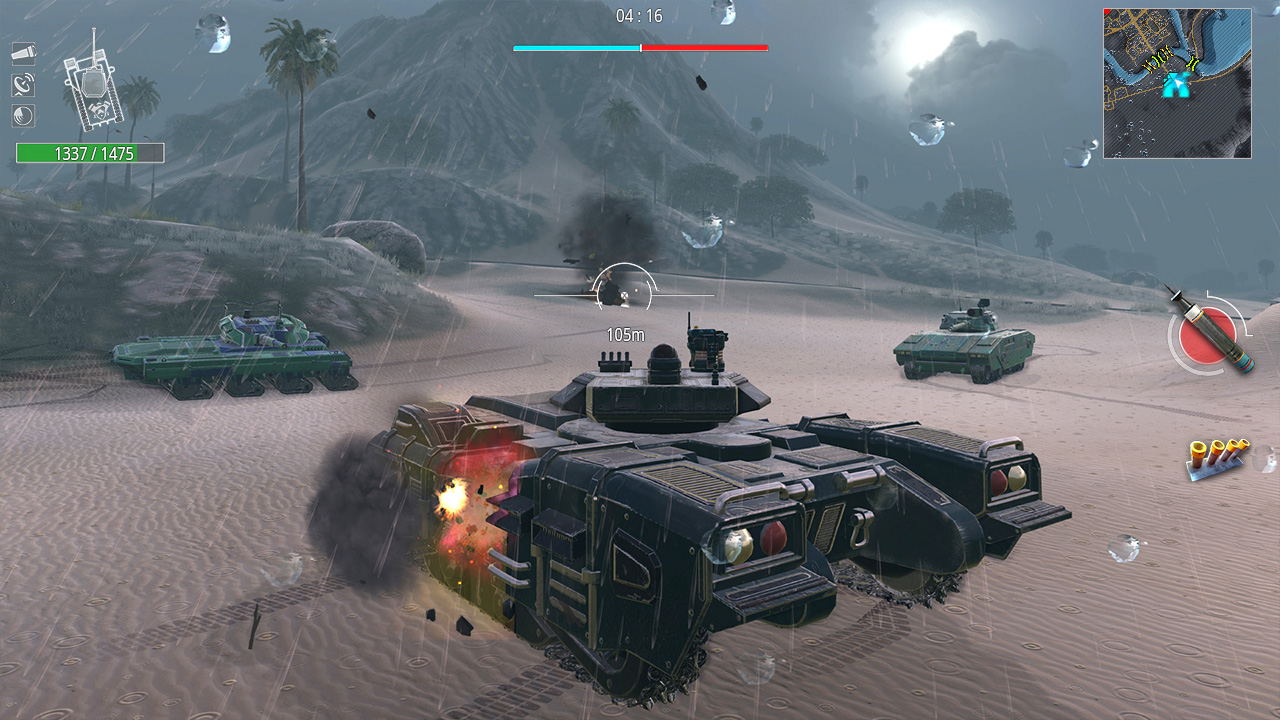 The single-player campaign takes place over a variety of locations, from the heated haze of desert warfare to the density of urban battles within the crumbling cities of the world. Each of the levels offer a large battlefield for warfare, each one housing various elements that allow for covering fire, long-range and close-quarters combat. Its control scheme is instantly accessible, with a dual-stick control that allows movement of both the tank and its turret separately. You can zoom in and fire your main cannon with the shoulder buttons and the D-pad allows you to select from three shell types from armour piercing to heavy projectiles.

As well as its offering of a single-player campaign, you can also take part in quick-combat scenarios with over three-hundred and sixty drill missions. These present a more-arcade style when compared to the campaign and offer a good quick burst of excitement should you be pushed for time. However, these also add to the overall longevity of the title with its mechanic of accruing cards through playing its game modes; all of which go towards to the customisation, building and upgrading of your very own style of tank with which to play with; both in solo and online modes.

There’s a huge array of options here, from tank classes to variations that range from light to heavy and rocket launchers to amphibious hovercraft. There are over sixty levels of progressions here, as well as a myriad of paint and livery options to build your very own creation. Whatever game mode you play in, whether it be the solo campaign, drills or online multiplayer, you are given a selection of five cards at the end of each round. These are then randomly placed and you are allowed to pick two cards to add to your deck. These can range from chassis types, tracks, main cannons and liveries. With these, you can build and design your own armoured tank and test out their abilities before taking them into the theatres of combat. 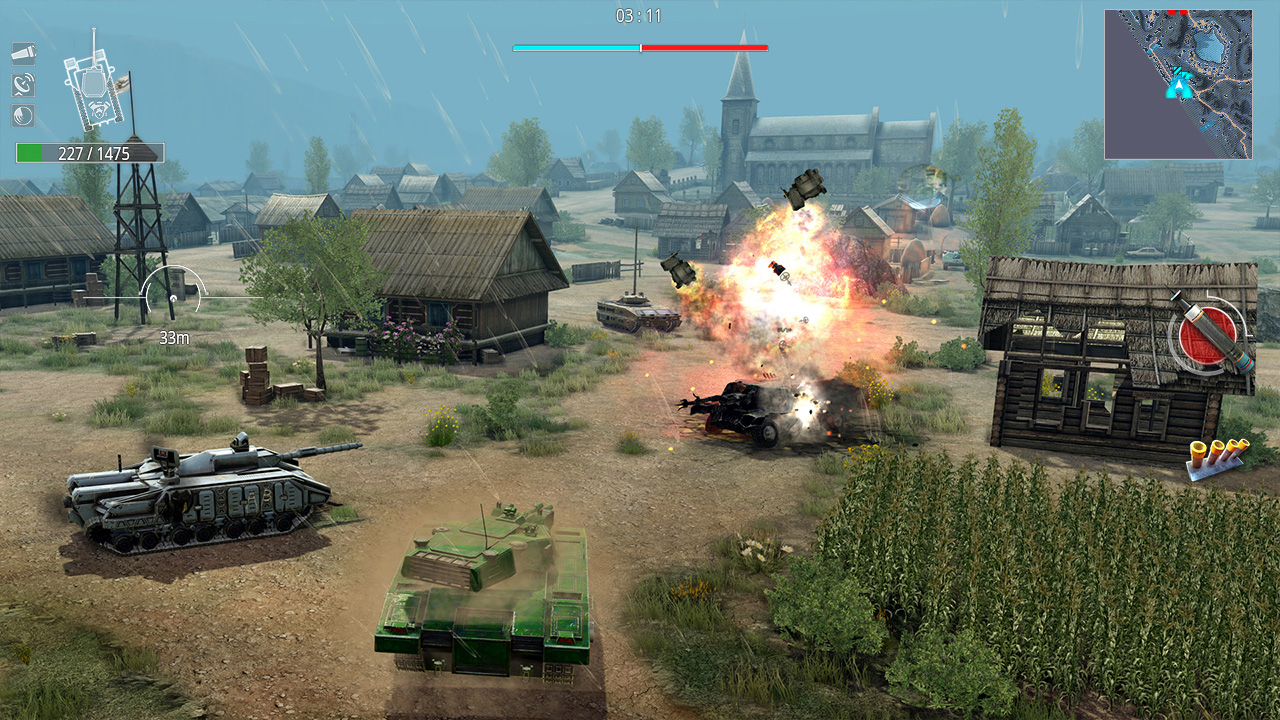 It adds a layer of playability and depth to the game, as well as provides an addictive quality in building your collection of cards; much like a loot-and-shoot game. Having the ability to take your creations within any game mode adds a layer of strategic value to the play, with many variations producing heavy, but slow tanks against the lighter, but more agile styles. It creates a sense of constantly building and upgrading your chosen design until it packs the firepower, speed and agility to reign on the battlefield. To add to its long-term value, the game also caters for multiplayer battles online with a series of objective-based game modes; all of which can be tailored-made to be played against AI bots as well.

Sadly, I wasn’t able to find any occupied lobbies for the purpose of this review due to its playtime being before its release date. However, its multiplayer game modes still provided a good value of entertainment with its AI opponents. Each of the multiplayer modes offer a series of objective-based tasks across a variety of maps taken from the single-player campaign. You can play game modes such as straight-up Deathmatches to more battle-orientated styles such as King of the Hill to Capture the Base; all of it playable both online and offline. However way you choose to play its multiplayer element, its satisfying level of tank warfare always produces an engrossing and exciting premise in all of its gameplay.

Overall, Battle Supremacy – Ground Assault offers a satisfying level of gameplay with its subject of modern tank warfare. It houses a wealth of game styles, modes and customisations that ensure its long-term values and with the added lure of card collections and tank building, provides a nice layer of depth and playability. Its style of play fits well within a casual capacity, although it also holds enough firepower to keep you invested for longer sessions too. However, its also worthy to note, that if you are familiar with the mobile title, Infinite Tanks, then this is essentially a port of that game; just one that has been re-hashed with a different title for the Switch. Saying that though, this is a game that sits infinitely better upon the Switch, making this a very playable title and one that will last over the long-term; especially, if like me, you need more boots on the ground when it comes to combat games on our favourite little hybrid.

Battle Supremacy – Ground Assault packs firepower with its wealth of content, game modes and card-building mechanic in creating your own style of tank.