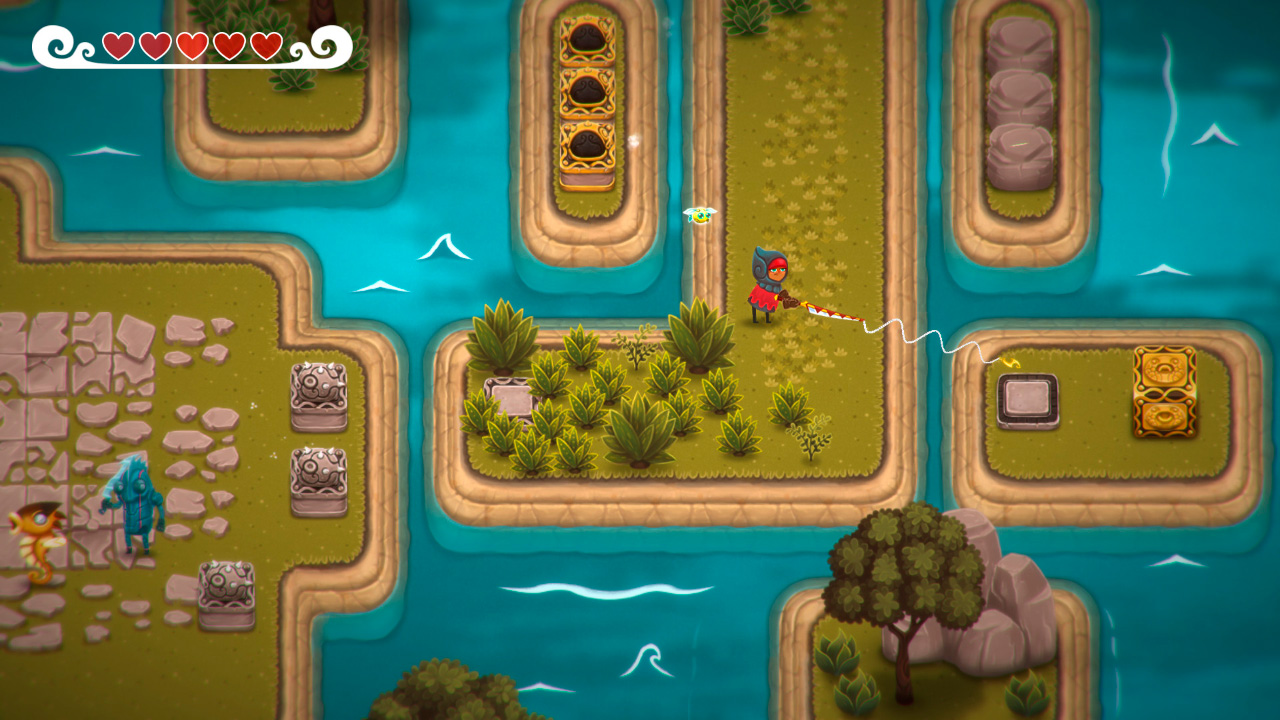 Legend of the Skyfish follows Little Red Hook on her quest to save her brother from the Skyfish, there’s also a Moonwhale who narrates a little to give you a very limited backstory. Legend of the Skyfish can be best described as a puzzle game, each puzzle is getting to the end of an island so you can proceed to the next. You, as Little Red Hook, have to navigate through the island vanquishing enemies and completing minor puzzles to access further areas until you reach the end and destroy what appears to be some kind of totem pole. 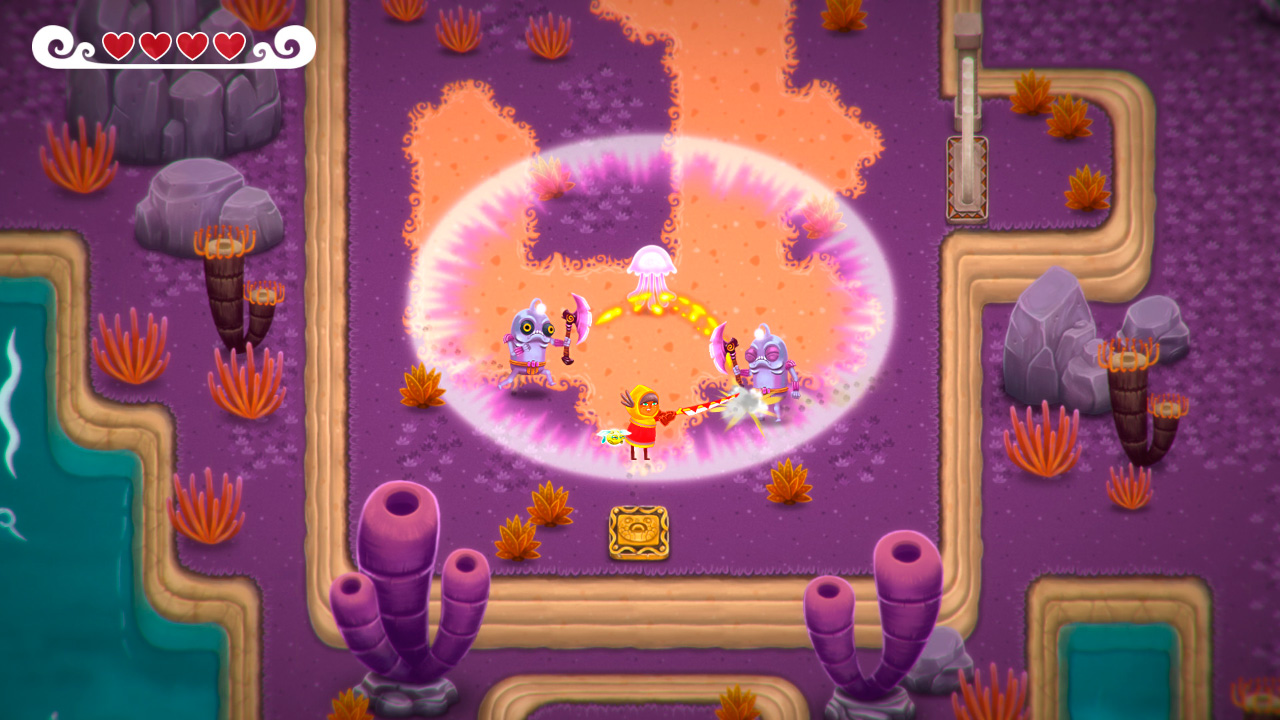 The uniqueness of Legend of the Skyfish is the fishing rod that you possess. It can be used to hit enemies, but more importantly, it can be used to hook things too. For example, if there is an enemy on an island you can’t get to then you can cast your hook onto them and pull them closer to you, in an almost Scorpion Mortal Kombat kind of way. Your fishing rod can also move boulders onto buttons or be used to hook you over to another island to continue your exploration. As you traverse through you will come across more complicated puzzles, moving islands and harder to beat enemies. At the end of a “world” there is an end of level boss who for the most part are pretty easy to get rid of, basically button bashing.

The enemies are fairly easy to beat. As you progress through Legend of the Skyfish the style of enemy are just slightly more evolved than earlier incarnations. There’s the standard sword-wielding grunts and projectile throwing enemies. Some of the enemies have a little variation such as the blowfish looking one which when it gets hit puffs up and can’t be damaged or the jelly-esque attackers who split into smaller versions of themselves when hit. Unfortunately the enemies in Legend of the Skyfish are some of the easiest you will come across. For the majority, a couple of hits is all that is required. You can hook them closer to you which paralyses them, which makes it even simpler to go through them. You could simply run past them as most are really slow, but to open some gates you need to decimate what’s on screen. The most taxing part of Legend of the Skyfish is the stepping stones that open gates, some will stay open when you cross them, some need to have something permanently placed on them whilst others will make nearby defences shoot spears. However even those puzzling elements can be completed pretty easily. 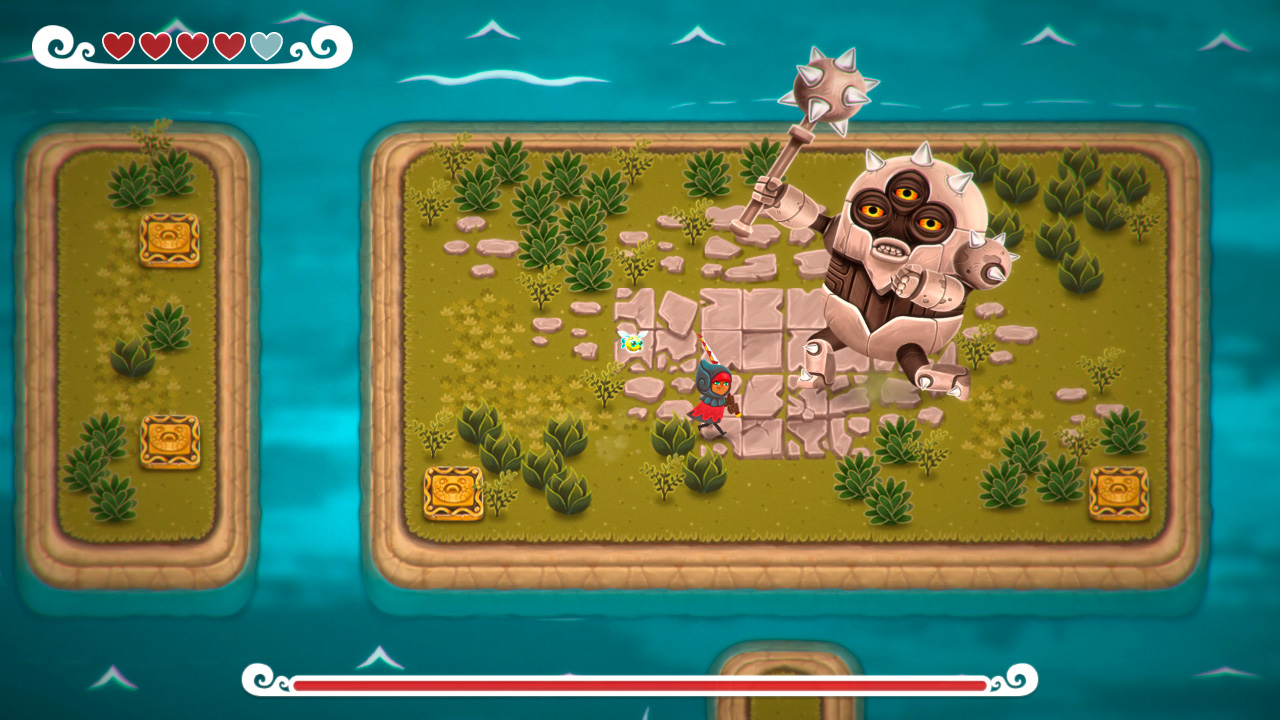 There are treasure chests you can find that contain upgrade-able weapons such as a fishing rod that can slow down enemies or a hood that gives you an extra life heart, to be honest you won’t need any of these upgrades because Legend of the Skyfish is a very easy game. Graphcially Legend of the Skyfish is a cute looking game with fairly simple graphics, the islands within each “world” all look the same. The fishing rod mechanic for the most part is fairly easy to use, the only difficulty will be hooking onto moving islands. Beyond the simple puzzling there isn’t much else to do, you should be able to fly through the levels in a couple of hours.

Legend of the Skyfish is a cute game just lacking any depth to it. The island stages and puzzling elements are very simple whilst the plot starts off interestingly enough but is barely expanded upon. If simple cute little puzzle games are your thing them you might get a couple of hours enjoyment out of Legend of the Skyfish, it’s just missing to many elements for it to be recommended.

Your brother has been kidnapped so save the day with your trusty fishing rod in Legend of the Skyfish!