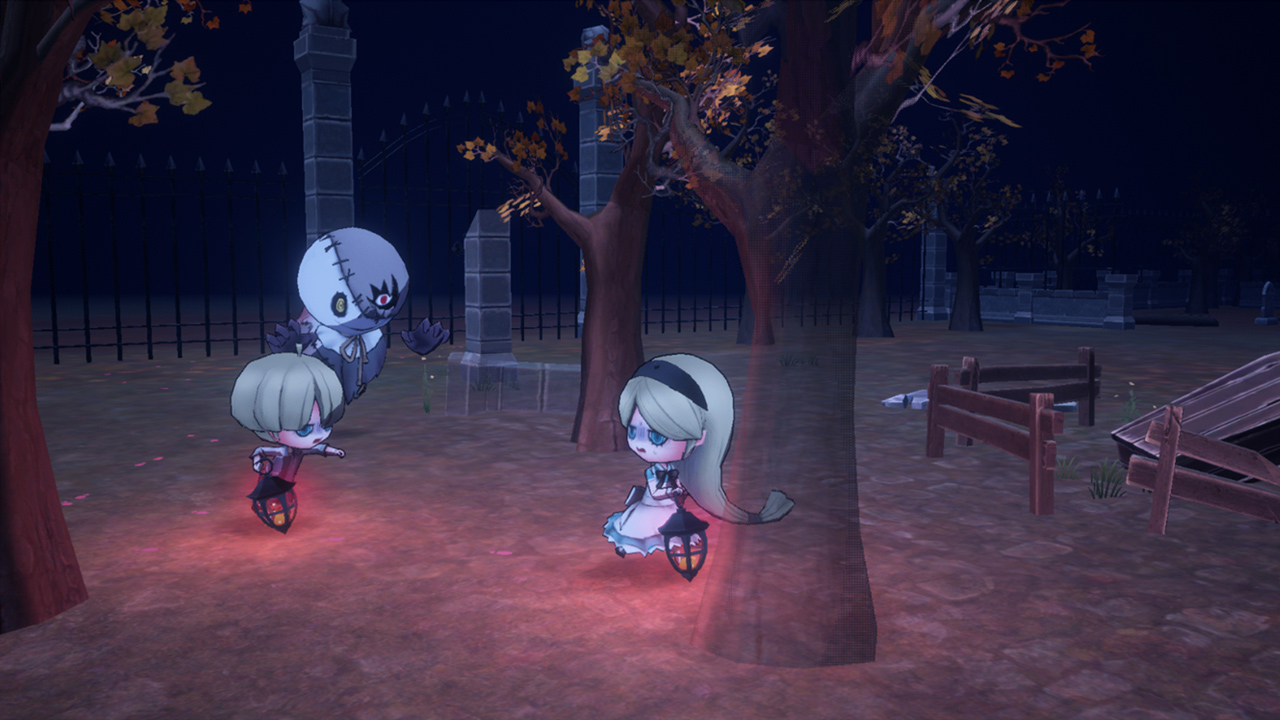 I would guess that for the majority of us, myself included, one of our favourite games as a child was playing hide and seek, or an equivalent game in a similar premise. Its a style of gameplay that has transitioned over to a variety of digital forms within video gaming too. Franchises such as the Call of Duty series owes much of their success to the hide and seek of Team Deathmatches and even though these were largely run and gun affairs, they still incorporated a level of hiding and seeking. And yes, I’m talking about those infamous campers! In more recent times, its premise has taken a turn to a more serious tone, with titles such as Friday the 13th and Dead by Daylight using the same template as hide and seek; albeit one that contains more urgency or undertones of playing on the horror of these titles. However, there’s a new kid hiding on the block, one that follows the classic template, as well as mimic the mechanics of the more modern horror titles, but one that has a more family-friendly feel to it, as Free Style Games’ Obakeidoro! seeks a release onto the Nintendo Switch.

Much like Friday the 13th and Dead by Daylight, Obakeidoro! plays on the fears of hiding from a monster, as he seeks you out in order to imprison you within a small cage. However, the characters, settings and general gameplay of this title is presented in a more child-friendly way, with story-book like foes and locales that plays a closer game of hide and seek than its older contemporaries. The game caters for up to four players, both in single and multiplayer modes, with three players being children who try and hide and one player being the monster who wants to capture them. In its single-player capacity, all remaining players are made up of AI counterparts; something that is also incorporated into the multiplayer element should the lobbies not be filled with enough players.

There are three levels, or maps on which to play, each one containing a further three variants that run at differing times of the day; equalling a total of nine levels on which to play. Within each of the maps, a cage lies centrally within a scenery that incorporates elements such as small villages, bridges and wooded areas. There are a number of small nooks and crannies, as well as varying levels above and below ground in which to hide, as your objective as the child is to escape capture and survive for three minutes, whilst playing as the monster tasks you with capturing each child and throwing them into the central cage until all are caught. However, there are also a number of further elements that bolster the gameplay and provide a series of unlockables to provide a variance to the style of play. 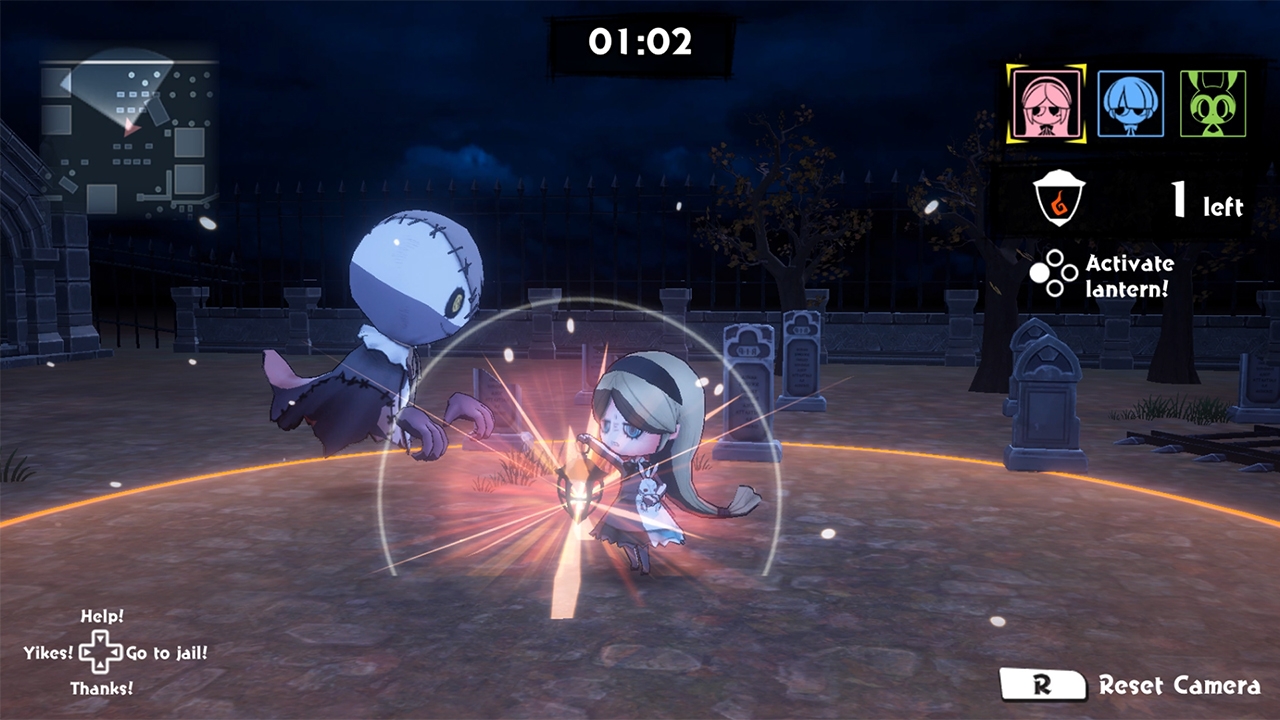 Each of the children carry a lantern with them that helps to light the way through the fog-shrouded or dusk-dusted levels. Find a place to hide though, and you can crouch into a small ball and snuff out the light from your lantern. Should you be found though, and your lantern can be used to temporarily stun the player who is the monster; allowing you some valuable seconds to vacate your current hiding place and escape to find another. To help even up the playing field though, the monster has a series of ghostly allies to help him in seeking out the hiding children. These come in the form of small ghosts who search the immediate area, alerting the monster of your presence should they spot you. If captured, or if you capture a child, the central cage then become a prison. Should all three children become imprisoned, then the monster wins. However, should only one child still remain free after three minutes, then the monster loses.

All is not lost though, for should you be one of the unfortunate ones who find themselves caught, then the central cage contains two switches. Activate both of them and the cage opens up, releasing all who may imprisoned inside. This gives a two-tiered system to the child characters, as not only do you have to hide and escape the clutches of the monster, but you may also be required to free any of your team-mates who may have been caught. It creates an air of tension, as you have to balance between your own survival to win the game, or increase your chances of success by freeing any captives. However, is it a trap and the monster lies in wait for you, or will the ghostly spotters see you and give away your position? This becomes further built upon as the game progresses, with disappearing scenery that reduces the places in which to hide; making it more difficult to escape the clutches of the monster, or even easier to spot the fleeing children. It’s up to you to read the situation and play in a manner which you think could be the most successful course to take. 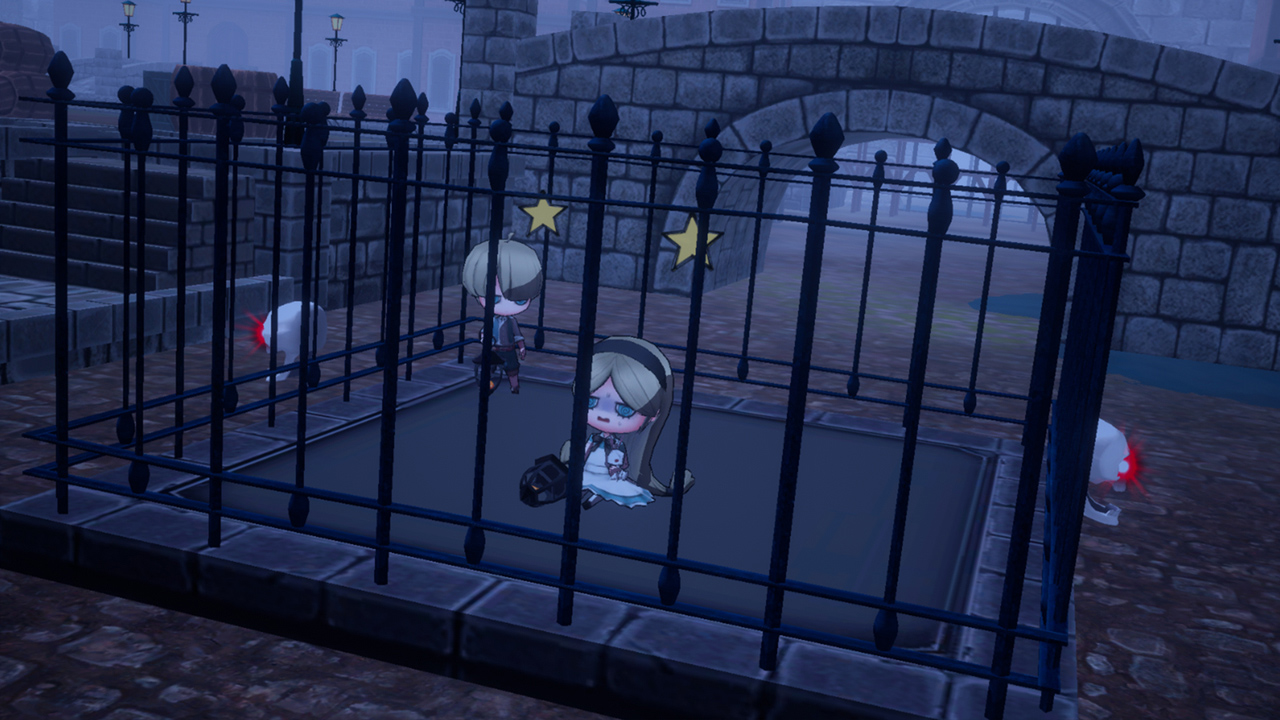 Whether you play online or in a solo capacity, each successful game awards you with XP and coins that levels up the character that you may have been playing as. As you level up the child characters, you can purchase a series of upgrades in the form of lanterns. These can have varying effects, from a larger radius with which to stun the monster to a more forceful stun that incapacitates your pursuer for a longer period of time. Level up the monster though, and you can unlock a variety of different pursuers from evil frogs to wolf-like creatures and skeletal rams; again, each one varying in ability with higher jumps, faster speeds or increased grabbing power. These all help keep certain elements of the gameplay fresh, especially online where you can come across various degrees of child capabilities and monster types.

As well as the ability to upgrade functions and characters, progression also brings a series of other rewards that present you with titles; something that holds more value within its online capacity. These act like achievements, requiring you to complete a certain number of games, or capture a certain number of children; the more you unlock, the greater your title for online bragging rights. For the soloists though, there’s still plenty here to get your teeth into. The AI plays a good game and its single-player element still retains the same level of urgency, stealth and tension in the mechanics of its hide and seek style of play. However, it also had to be said that it is in the game’s online capacity where it truly shines. Not finding a full lobby is never punishing either, with any missing players simply being taken by its AI counterparts.

Overall, Okabeidoro! offers a fun solo and multiplayer experience in the hide and seek mechanic on which it is based. Its more family-friendly presentations makes this an ideal family game, both locally and online. Whatever character to choose to play, the thrill of the chase or tension of hiding never tires, although its lack of variance in its maps or levels can begin to feel repetitive after a while; something that could raise question marks over its long-term appeal. However, the inclusion of levelling up characters, upgrade systems and titles do go some way towards keeping things fresh. All of its presentations and gameplay variances, in terms of some of its mechanics, do provide a thrilling backdrop to its elements of hide and seek and much like the games I played as a child, provides enough entertainment to have kept me playing day after day; even after dusk.

Okabeidoro! offers a fun solo and multiplayer experience in the hide and seek mechanic on which it is based.