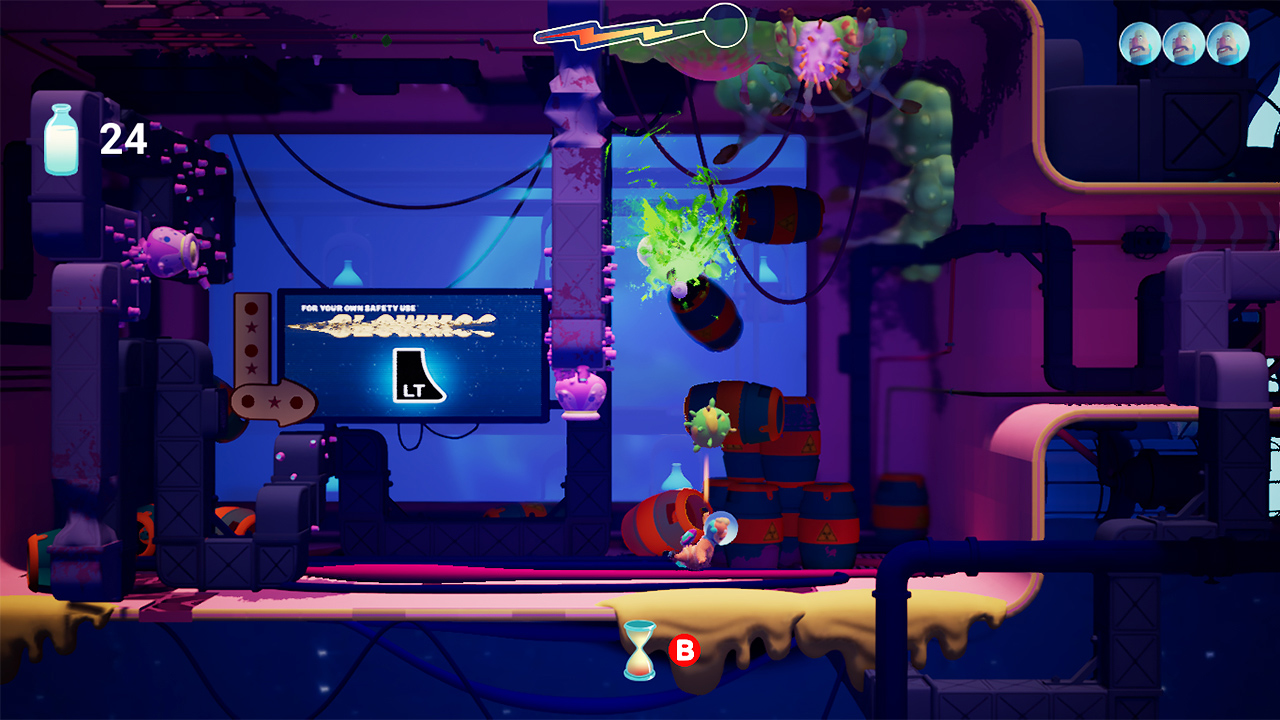 When I picked up Space Cows, which comes to us from Happy Corruption, I wasn’t totally sure what I was getting myself into. Sure, I had the basic information: twin stick shooting, something about cows, a clear air of absurdity, but that was really about it. There was a familiarity to it, though, that I couldn’t quite put my finger on, a certain sense that echoed back to my childhood days and a certain title that took up a shocking amount of time when I was maybe in junior high school. Then, after the seventh time I died, it finally hit me: Space Cows might very well be this generation’s Boogerman.

Let me backup for a moment, and then proceed forward with wild accusations. Space Cows is the tragic tale of Best Regards, a chubby dairy farmer, and his lovely cow, Betsy. When Best refuses to sell his cow to a shady looking conman, Betsy is kidnapped in the dead of night. Thinking quickly (and clearly logically), best dresses up like a cow so that he, too, can be kidnapped, and this lead him to find out that Betsy has actually been taken to a Milk Space Station, because why the hell not. Also, the space station is overrun with Mootants, and you’re armed with a plunger and propel yourself with farts, and the whole thing is nonsense but dammit, I’m glad to see an original idea that cuts right to the quick of it. The central idea is that we need to save Betsy, and there are several levels of aliens, lasers, traps, milk, farts, and big Mootants that need to be dispatched before Best can get back to his lifestyle.

Space Cows is, as mentioned, a twin stick shooter, but it’s far from what you’d normally expect (and not just because of the tone and aesthetic). As mentioned, Best is armed only with a plunger, but he specifically has just ONE plunger. This means that he gets a single shot at a time, and that shot needs to land, wherever, before you can take another. So, in theory, if you’re being beset by a huge wave of enemies, you need to make sure every single attempt hits to chain together a rapid succession of blows, otherwise you hurl your plunger across the room and need to possibly wait deadly seconds until it returns. Additionally, as this is in space, you’re dealing with full, floating movement and enemies coming from literally any corner and direction, especially when the room begins to pivot and spin, leading to disorientation and a lot of careful thinking to line up the shot. Thankfully, Best has the ability to repeatedly and temporarily slow down time, because I don’t know why, and this is helpful early on and positively invaluable later, when enemy waves get positively massive and the milk becomes more scarce than ever before. Oh, right: this is also a “one hit = one life” sort of game, so you need to collect dropped milk particles to get back another life, and the amount scales depending on difficulty (Cheeasy, Normoo and Hardcow). 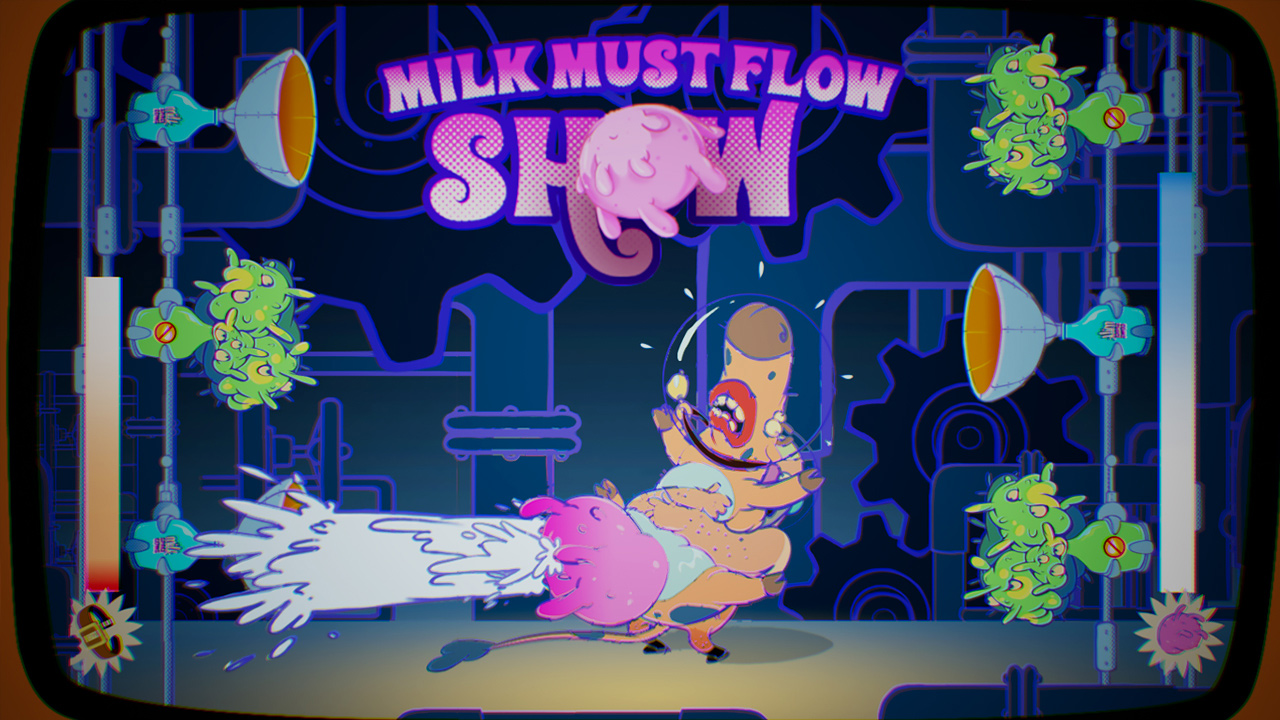 When I made the comparison to Boogerman at the top, younger players might not totally understand, so let me make the connection. Boogerman was a platformer for the 16 bit generation that most critics immediately panned because it was full of gross, juvenile humor involving burping, farting, loogies and, naturally, boogers. But the grossness was just the paintbrush used to color in the details and to attract gross kids to playing this game. Once you got over that initial shock, you realized that Boogerman was an incredibly well put together platformer, with a variety of weapons, good level design and some surprisingly funny moments that had nothing to do with grossness. When you first load up Space Cow, the menu farts constantly, you’re definitely naked in space (didn’t pack a change of clothes in that cow costume, I guess), you fart to “dash” across the screen and, oh yea, everything is a damn cow/milk pun. These kind of things, plus the Mature rating (Best is nude, there’s no getting around that) can easily put people on the wrong side of opinion with this title before it even lands. The crazy part is, the thumbnail for the game icon, which looks insane and violent, totally misrepresents how the game actually performs visually, with goofy CGI 3D rendering and the music and tonality mostly being pretty lighthearted (though, yes, there’s pink guts that explode, but it’s virtually indistinguishable from pink pudding).

Space Cows is genuinely difficult, and that’s not because the game is poorly designed or has bad controls. There’s a lot of evidence that things are carefully partitioned out by Happy Corruption (and maybe some input from the publisher, ALL IN! Games), and nothing is just randomly selected. The early alien waves are easy, in theory, but missing that plunger shot immediately drops you into a situation that can turn ugly. Jellyfish-like enemies cannot be defeated by your weapon, and, instead, you gotta reflect their shots back at them at the correct angle, or use their deflected bolts to attack other enemies. Even an early set of lasers asks you to do perfect timing and location in order to dash through and not get damaged, because, again, the Hardcow difficulty level is a single life with no checkpoints, and even the Normoo level has the checkpoints pretty few and far between. There’s a bittersweetness when you finally activate Rage Mode for the first time, allowing you to flood the screen with multiple shots of vengeance, because it becomes the twin stick experience that I like best, but it’s so fleeting and doesn’t happen as often as you’d like. In that regard, I suppose that Happy Corruption keeps the game on a tight leash, making sure that the difficulty is kept in check while still allowing for glimpses of hope. 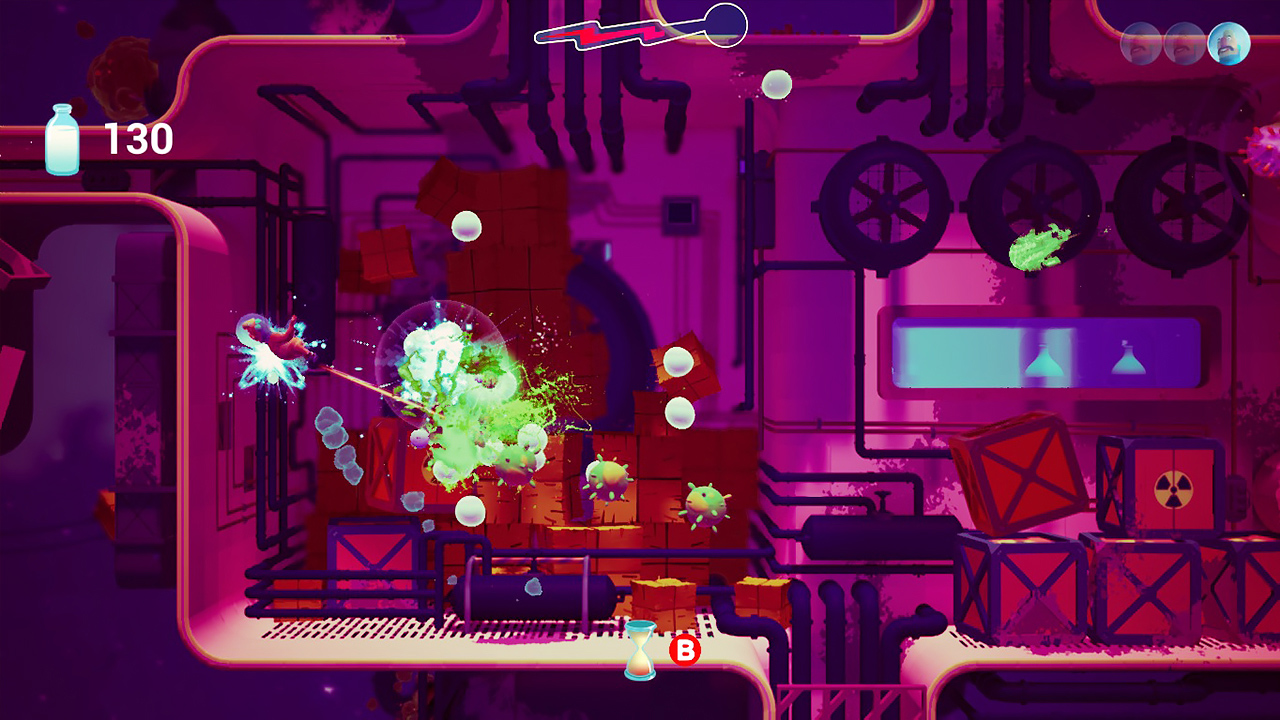 The only thing I really need to touch on are the weird minigames sprinkled throughout, asking you to grab a cow and do a little side mission called Milk Must Flow. The oddball nature of the game is already permeated throughout, but these mini games really can throw you off, because they’re fun enough (think Mario Party-style events, but with cows and milk), yet there’s not really a great payoff. For the lower difficulty levels, you can get some extra milk that might help you towards an extra life, but there’s no incentive for the Hardcow level, and can honestly distract from the fact that there are MASSIVE aliens awaiting around the corner and you’re gonna get your head stomped in if you’re not perfectly accurate and fast and able to move things around at just the right moment.

If you’re looking for a game that provides a serious challenge underneath a veneer of silly jokes and puns, Space Cows is 100% the beast you’re looking for. I appreciate that the developers kept the price the same as the Steam version, and I think people could find a lot of enjoyment here as long as they’re aware that a.) there are a lot of sound effects, eye-rolling dialogue and frequent farts, and b.) this game could easily make you feel angry or inferior when you get murdered for the 200th time. It’s legit, and I commend Happy Corruption for packing such a serious punch inside such a lactose package. It’s more than divine: it’s bovine.

When your hero is named Best Regards, you already know you’re in for some nonsense, and Space Cows delivers some eye-rolling humor with hardcore gameplay.