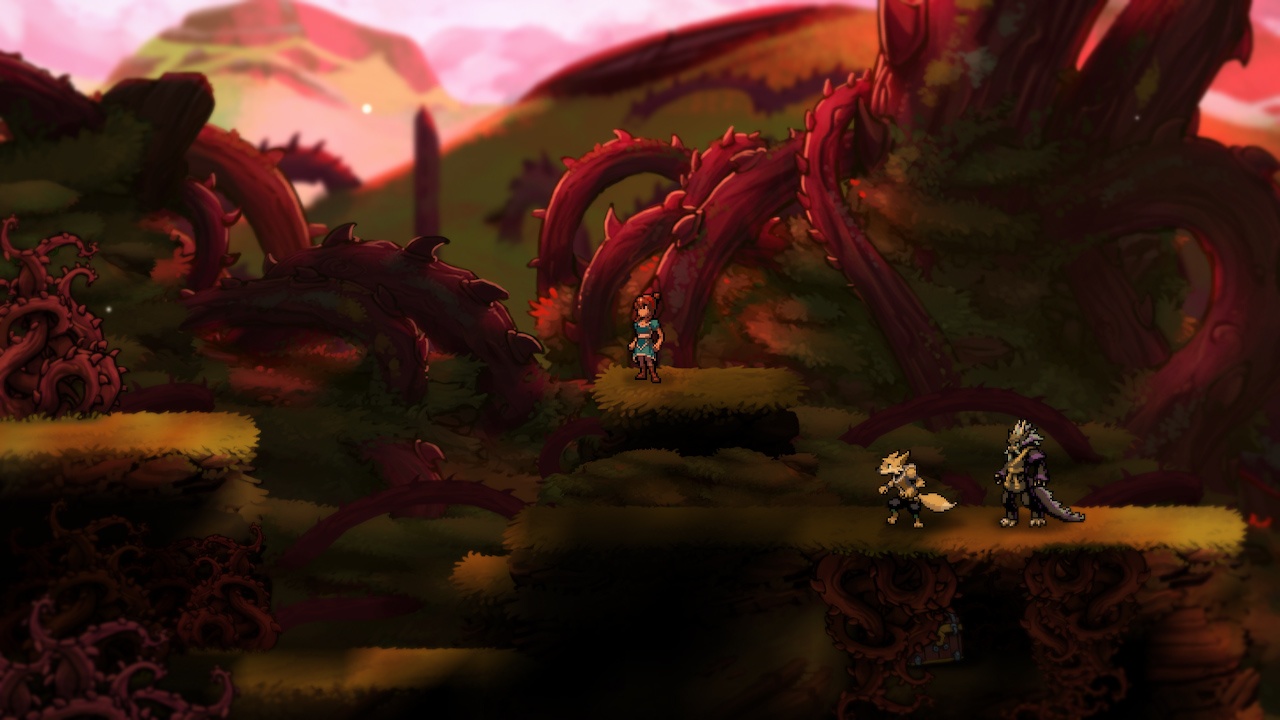 I always appreciate it when developers try and bring something new to the table; especially when it comes to role-playing games, which have pretty much covered all aspects of gaming in one way or another. However, it can be a bit of a gamble, with some games excelling in what they set out to achieve, or producing a combination of successes and failures, or just simply falling by the wayside. In the modern era of indie game distribution being more widespread than ever before, it must be difficult for developers to come up with new ideas. However, it’s certainly something that Sungazer Software has managed to pull off as The Tenth Line: Special Edition journeys towards a release on the Nintendo Switch.

Before we go into the various elements that comprise the overall game, we’ll take a look at the story and the reasons behind why you should embark on such a venture. You play the role of three characters, although primarily, the central protagonist revolves around a young princess. The story begins as she flees from a cultist sect, her escape leading her into the thick brambles of a dense forest. It is here where the princess meets Rik and Tox; a fox and draco, or dragon, with human characteristics. After learning that they would be rewarded beyond their wildest dreams by the King for his daughters safe return, the two of them agree to help the Princess return home; embarking on a journey of twists, turns, danger and a soul-search of emotions.

Although it takes a while to begin gathering pace, the story soon evolves into a gripping tale of the relationships between man and beast. It’s a very thought-provoking tale, one that holds real emotive values and keeps you gripped to its conclusion. It’s all presented through a series of narrated cartoon-styled backdrops, as well as some in-game narratives that builds upon a development of character and promotes an investment into the lives and fates of its three central characters and their relationships within the world around them. Despite its slow-start, its definitely a story that’s worth sticking with and the experience on which it takes you makes it a very worthwhile investment. 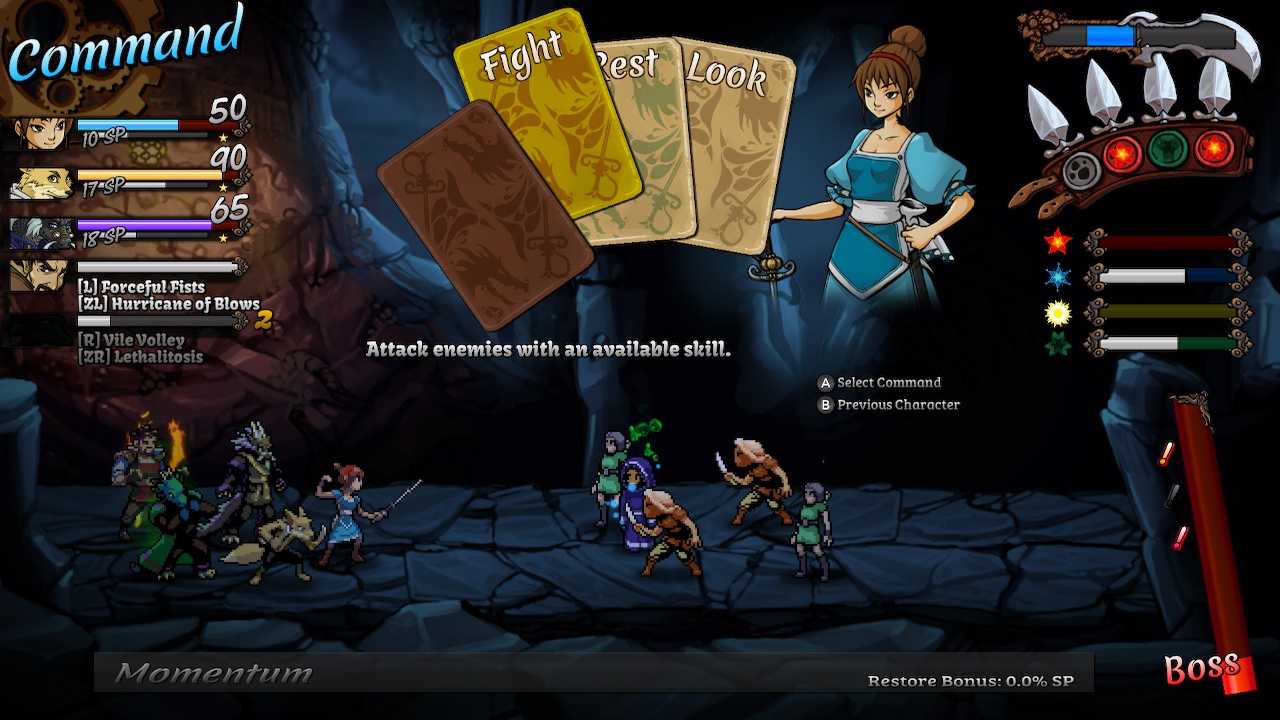 At its core, the game plays as 2D, side-scrolling and turn-based role-player. However, there are also a number of other elements from platforming to puzzle-solving and an intuitive upgrade system to an interesting card-based mini-game. The majority of the gameplay though, involves exploring a series of 2D regions where you have to get all three of your characters to the level exit and the next location. You need to make sure all three party members make it to the end of the level in order to progress. This involves traversing a series of platforms, as well as uncovering a series of hidden secrets and collecting stars in order to build up the growth levels of each character; something which becomes important during the combat elements of the game.

To help you get the most out of each level, each of the characters possess a series of skills that can be used to effectively traverse the terrain. The princess has the ability to move large rocks, whilst Rik can throw objects and leap great distances and Tox can use a series of elemental powers to change his breath from an icy blast to a fiery furnace. These skills can be implemented to help other party members reach hard to reach place, or clear blocked paths; all of which go towards revealing the levels’ many secret areas to collect chests or out-of-reach stars. A series of puzzle tasks also requires you to make full use of each of the characters’ abilities to help solve them.

The combat section of the game also contains a number of elements in their execution. With each party lined up on opposite sides of the screen, attacks or defensive stances are implemented by the use of a card system. Working on a points system determined by SP, or mana, each attack has an SP value attached to it; the more SP you have, the wider the range of attacks available to you. This creates a balance that you need to be mindful of, as a shortage of SP means you cannot attack; although you can choose to rest party members in order to refill their SP levels. Each attack also comes with a cool-down effect; meaning that you have wait a few turns before that particular card can be used again. However, you also have the ability to execute a functional defensive capability by pressing a select button for each button at the right moment. Each character can also perform a super-defensive move and super-attack, the power of which can shield the whole party or produce devastating attacks; depending on the amount of stars you accrue throughout the levels. 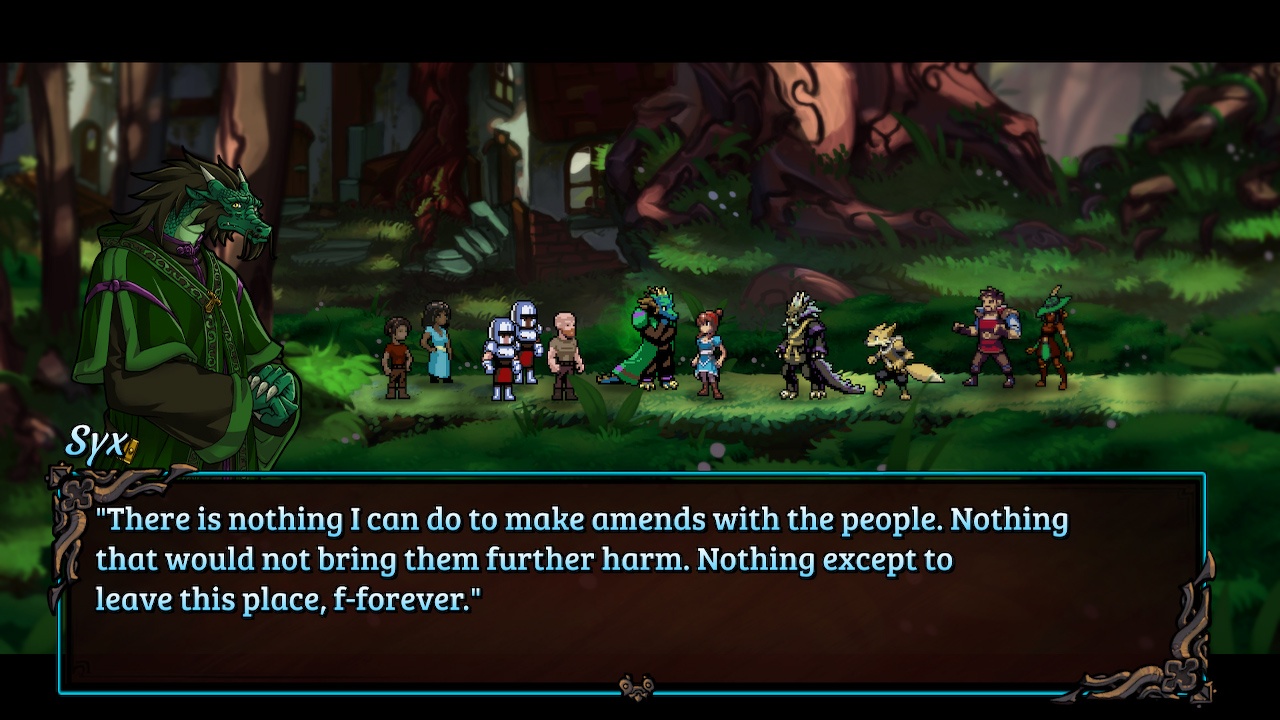 Outside of the platforming and combat, the game contains a couple of interesting mechanics in its upgrade and reward systems. Although characters do level up after defeating enemies, your abilities and stats are increased by a system called the Power Flow. Much like a flow chart, you can purchase a series of cards that represent different ability and stat boosts. However, you can only purchase cards that adjoin to each other, eventually building to a path that can lead to other character abilities and once joined, can grant extra abilities across all party members. It’s a simple-to-use system and one that grows in strength the longer the paths you create.

Its other function comes in the form of the Quad Pro Quo mini-game that can reward characters with a number of items. When you come across certain characters within the game, you can play the mini-game with them using a variety of cards that can be picked up as you progress on your journey. It works with each player laying down a particular card, its design housing numbers along each of the cards four sides. If the numbers are higher that your opponents adjacent card when flipped, then you gain control of that card. The character who owns the most cards by the end of the game wins from a variety of rewards. To add an extra level to the strategic values of the game, some cards also come with elemental values that can fare better against weaker elements. All of its elements combine to produce a game that holds the same values of some of the old-school titles of yesteryear, making this a journey full of reminisce and interest.

Overall, The Tenth Line: Special Edition offers an interesting role player and journey, as well as housing a series of unique and various elements to bring different mechanics to the gameplay. It’s story, although slow to start, is interesting and compelling; helping to promote an investment in playing and the characters surrounding your journey. All of its elements, from combat to upgrading and platforming to mini-games hold enough content to keep them interesting and although can seem daunting in execution, actually become second nature as you progress through the game. All of its elements combine to produce an interesting game, with a party of three to tend to and a series of interesting and varied locations on your journey to safely return the princess to her home. It works smoothly too from a technical perspective and houses a variety of difficulty levels to cater all types of players, as well as offering a new game plus to take on the more demanding difficulties with your enhanced party. It’s interesting, it’s fun and a variety of different modes within the game ensures that this is a journey that you won’t tire from.

The Tenth Line: Special Edition holds a number of elements to keep it interesting and investing throughout the length of its thought-provoking journey.