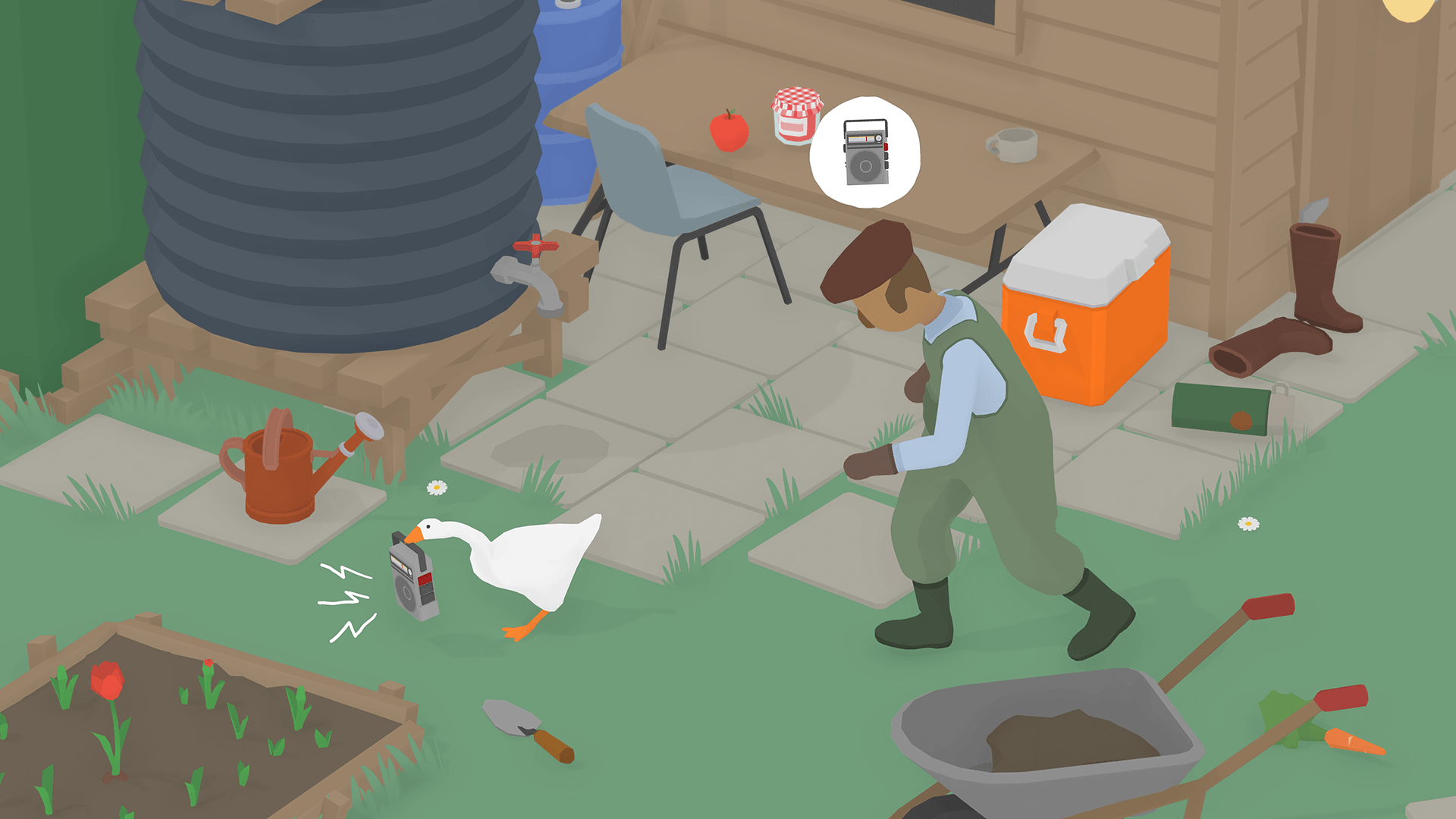 It’s so hard to go into a game completely blind nowadays. Between endless hype trailers, stills of concept art released years before inception, and critics and fans arguing over the purpose/intention/enjoyment of a game, having something that you’re totally unfamiliar with is a diamond in the rough. So when I heard the title “Untitled Goose Game” several months back, I made a point to completely shut myself off from it. I had no desire to find out more, or to see screenshots, or even get impressions from the Nintendo Treehouse or things like that. I didn’t go seeking out information about the development team, House House, and, every Reddit thread that tried to entice me with thoughts, memes and gameplay footage was actively avoided. So I grabbed my review copy just a couple of days ago with no other information, downloaded it, and stepped into one of the most interesting and honestly hilarious games that I’ve played in a long, long time.

Untitled Goose Game is very much the story of a goose, and that’s all you really have and need to know. You are a goose, and you are simply milling about your life on an ordinary day of interacting with farmers, shop owners, aspiring artists and any number of other people who are living in your quaint little town. As a goose, you have a few objectives in your life, but the biggest one is being an utter nuisance. People might think that geese are tame, benevolent beings, and those are people who have only ever seen photos of a goose. Those who have actually interacted know that a goose’s mindset is to be curious, invasive, aggressive and completely annoying. Find someone in New England who hasn’t had at least one bad experience with a goose as a child; there’s probably one, but they live far enough away from water for it to have never been an issue. This goose, however, isn’t just regularly a pest, but it’s a goose with an agenda. No one’s sure why the main goose has a checklist of things to do, but dammit, it’ll accomplish as many items as it can, and woe unto you if you get in the goose’s way.

The gameplay of Untitled Goose Game is simple: do the things on your list. You have nothing special in your arsenal in order to accomplish these goals, as you are a goose. You can honk, you can run, and you can pick up things in your beak. Several things will be too heavy (trash cans, a cooler, a shopping basket), so you gotta drag them along at a painfully slow speed. Still, the game has not set you up to fail, and each and every objective can be accomplished with a bit of patience, perseverance, and creative thinking. The townsfolk are far from amicable, however, so being able to work around the human populous is important. They won’t hit you, but they will chase you off and swing things at you, so you gotta be ready. In addition, though you can spread your wings majestically, you cannot and will not fly, so don’t get your hopes up on being able to take flight. And, when you get running, you tend to take turns badly, so you can’t just do everything at a breakneck speed. Instead, think about how to creatively solve your problems. For example, if you need to get the farmer wet, you have the choice of figuring out how to hit him with his own sprinkler system or convincing him to go for a swim in the pond. If there’s something he REALLY needs (his keys, for example), I’m sure he’ll roll up his pants and dive on in. See? Creative thinking! 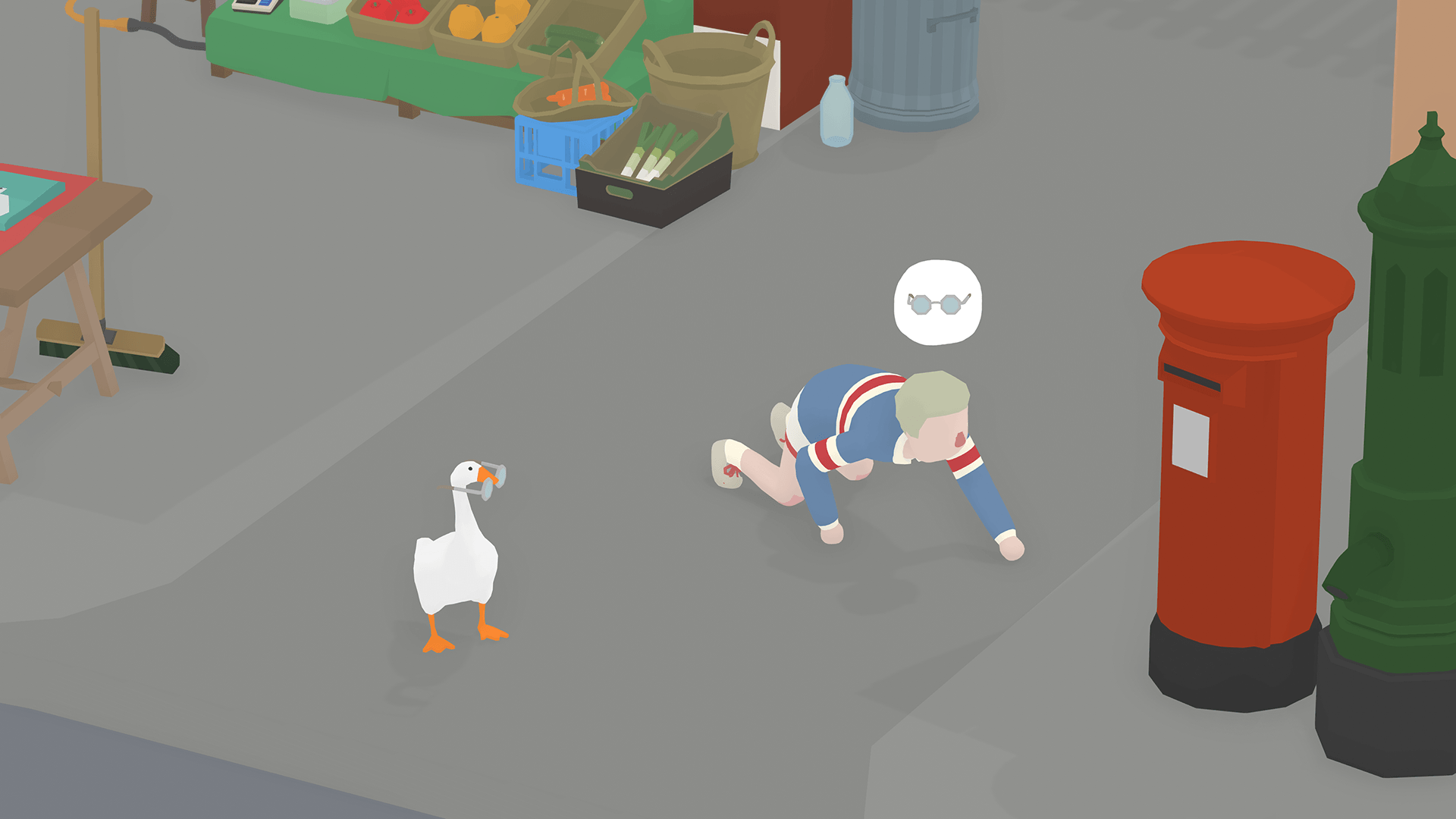 Easily the most impressive part of Untitled Goose Game is the whole goose aspect of it all, and I mean the animation and creation of the game. From a first impression, Untitled Goose Game looks beautiful, having an adorable watercolor style to it that feels like you’re moving through a modern painting. The people and objects all have a roundness to the design, giving the impression of their unimportance compared to the protagonist or impressing how humans are just sort of colored blobs in the eyes of a goose. The goose, though, is in sharp, magnificent detail, and is so cute that I sincerely want a goose plush to share with my kids the way I shared this game (more on that in a moment). It has a fantastic waddle as it sashays along, with its tail feathers swinging in greater effort when you’re running along to escape an irate, barefoot homeowner (I did take his slipper, after all) or struggling to drag a bag of fertilizer into the water (no purpose there, I just wanted to do it). The way his head and neck move as you crane and strain to grab objects high and low is perfect, and even the stealthy creep of a slow moving goose trying not to be noticed is amazing. As bizarre as it sounds, I feel like I’ve seen better animation here, on a damn goose, than I’ve noticed on several significantly larger titles, and that goes to show what happens when you have passion and interest in your subject. In this case, a goose.

The adorability and whimsy of the game continues throughout the other elements of the world, punctuated with the piano music that seems to shift and alter as you continue your “errands” in town. When the goose is just meandering along, sometimes you’ll get light notes just to give a bit of lightness, showing that nothing serious is happening. When you’ve successfully grabbed an important item and are taking off with it (farmers don’t need their rakes!) the piano music gets frantic and speedy, and there are even a few dark tones when you hit the right success with your quests (locked someone in their own garage). As odd as it sounds, it gave me memories of Mr. Roger’s Neighborhood, and how it felt to move around the Land of Make Believe, only I never remember Lady Elaine tricking X the Owl into breaking King Friday’s vase. As cute as the game is, if you don’t enjoy seeing a goose tricking people and creating havoc, you might have problems with the missions. Then again, that’s an incredibly small subsection to fall into, so you should be fine.

Untitled Goose Game is absolutely one of those games to play with other people, but there’s a lot of enjoyment to be had alone. I made a point to play it docked, handheld, alone and with an audience, and the result was always the same. There’s so much to do and explore in each of the different areas that the repetitive nature never gets old or stale because it always varies a bit. The raucous laughter of my daughters as I narrated getting myself on TV and then being chased by the shop owner is something that is worth its weight in gold, and moments like that happen again and again. The quests scale up in difficulty, with several being very obvious at the beginning to needing to get incredibly creative towards the end (patience makes the spitting out of the tea all the more worthwhile). As your goose is never in any real danger, the humor and humility simply escalates, making you feel like you really are the worst animal in the whole town, and that’s a special kind of role. Though, I will say, I still, have not, figured out how to make the farmer put on his summer hat, and I’m looking forward to seeing someone more skillful than I do it, because that’s one of the last quests that I never did. 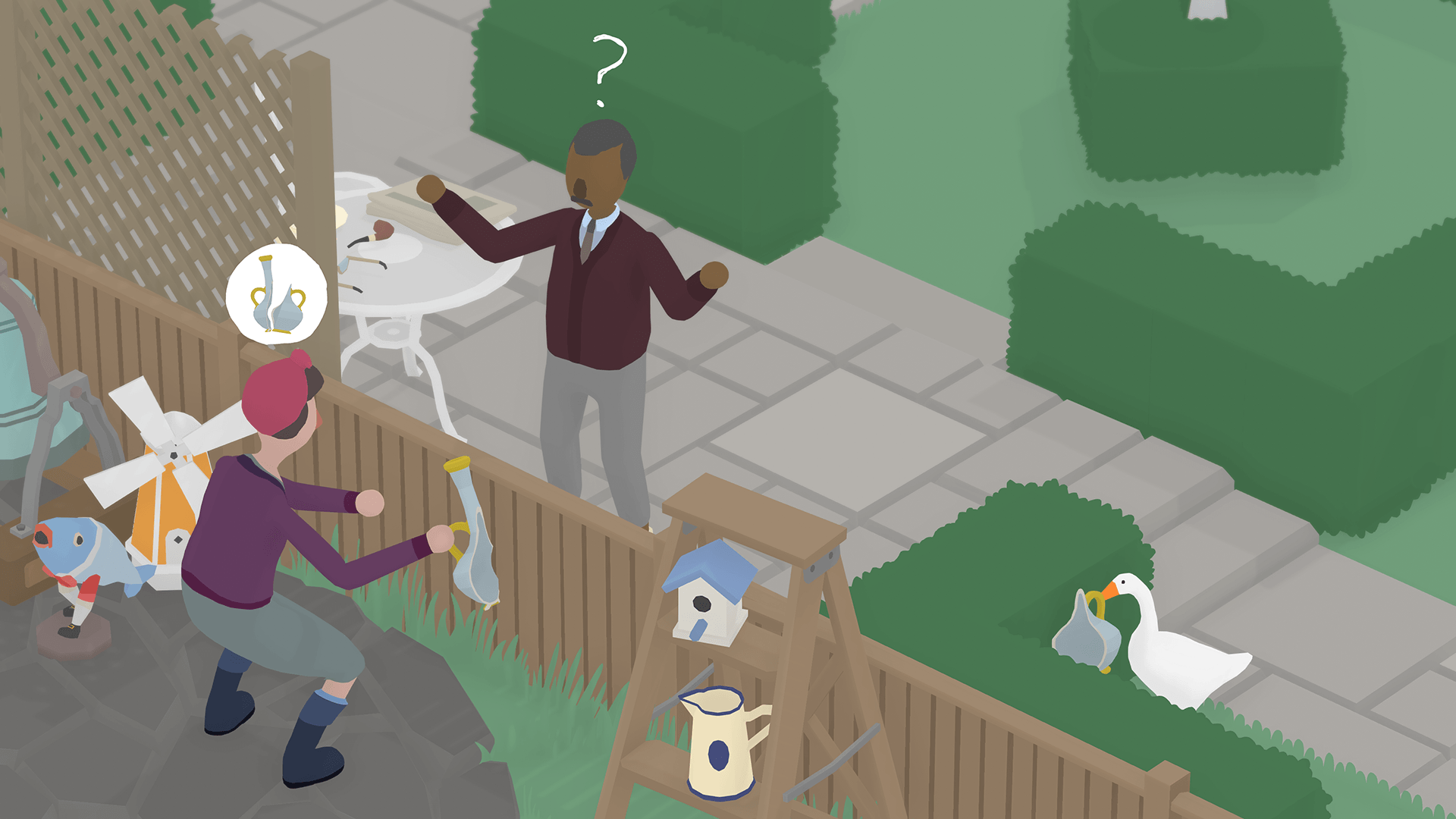 I’m hard pressed to find a serious point of complaint with Untitled Goose Game. It’s silly, sure, but it’s meant to be silly, and it backs up that silliness with real gameplay and thought out goals to accomplish. A lot of people got fed up with other animal simulation games because they were intentionally buggy and really leaned into the “random” humor of it all, which can grate on you if you’re not in on the joke. For Untitled Goose Game, there’s polish and love, and there’s so much to do that comes from exploration and handling. You need to see if you’re someone who prefers to have the button controls on toggle or hold, and I think there’s merits to both (run and zoom on toggle, wings and bend on hold). You gotta see if you can really scare the bejeezus out of the right people, or if you’re more of a stealthy goose, creeping in the shadows and popping out in time to honk and really mess up their concentration. The controls bend to your will, making the movement of your head, the positioning of your body and the way you can move about and interact with items believable and physically relevant. When I realized that I could actually brace certain items against each other and climb on them, it was an awakening that led to me spending several real minutes trying to steal the glasses off someone’s face. It’s simple ideas with a variety of executions and no bad paths to get there. Hell, if you’re stuck, go ahead and reset the whole level: all the items go back into place, but you don’t lose your accomplishments which I SINCERELY appreciate (that farmer would not keep his radio on the picnic blanket!).

This is a streaming game and a personal game, a completionist game and a drinking game. It’s a huge town but you can unlock gates to make going back and terrorizing your favorite people super simple (I loved chasing the glasses kid). It launches at a discount, it’s on PC as well as Switch, and costs less than two movie tickets but will bring you a much longer amount of joy. I can’t argue against getting this unless you’re actively downloading Zelda right now, at which point consider pausing Zelda and grab this instead. I’ve played Link’s Awakening before, it’s great. But I’ve never been so enchanted by such a simple, complex, well executed, well meaning, malicious, adorable, and positively enjoyable game. Untitled Goose Game is, by and large, my favorite game so far this year.

Cute and chaotic, hilarious and hectic, Untitled Goose Game is sure to delight and excite players, watchers and everyone in between.