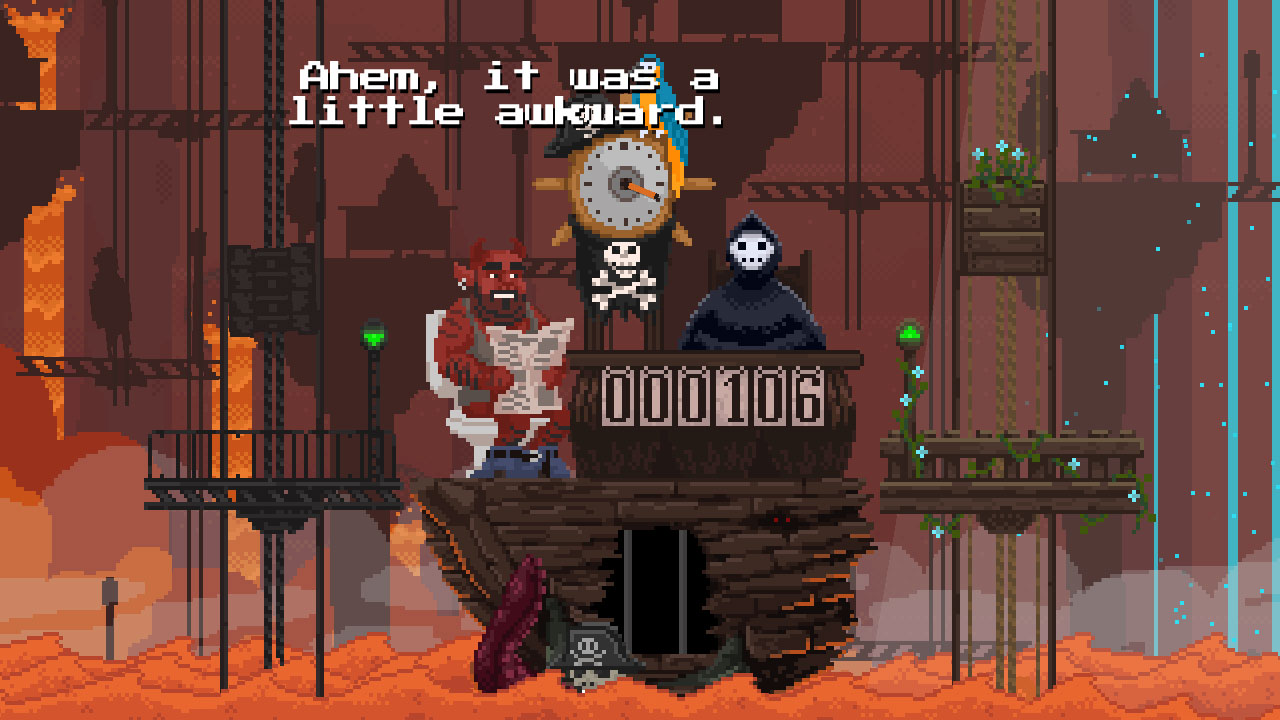 If Papers, Please’s grim portrayal of immigration control was too close to reality for you, then Peace, Death is the perfect substitution if you’re after a similar sim, despite its morbid subject matter. Sending denizens of hell to where they belong might grow tiresome after a while, but as far as mobile ports go, there’s many worse ways to cast people to an eternity of suffering than this.

But if you want to keep your swiping left and right solely reserved to Tinder, then it’s best to skip Peace, Death. The belly of the beast, and really, the rest of him, is pretty much just that. Starting out as a newbie Reaper, you’re given the basic task of sending humans or devils either up the elevator to heaven, or down to the pits of hell. Survive your shift successfully and you’ll impress the boss, make too many mistakes and the elevator crashes, making you very unpopular around the office. It’s a pretty simple process, all you have to do is use your cunning to decipher if the big red demon is, well, a demon or a human. As your career progresses, so does the difficulty of each level, providing new and interesting challenges to make knowing if someone is bad or good more difficult.

Demons almost always go straight to hell, that’s pretty obvious, but humans, as complex as we are require a whole load of work to read to tell if we’re heading up or down. Early levels require you to spot blood spots on and around characters, check for horns or weapons – basically, signs of nefarious activity. These early levels are simple and forgiving; it’s pretty obvious where they need to go, but as the levels tick by so do the challenges. Purgatory is probably the most interesting addition to the games dynamic, where humans that have negative effects, such as weaponry or blood stains need to be checked to see if they can be removed before sending to hell, thus requiring them to be sent to purgatory instead. 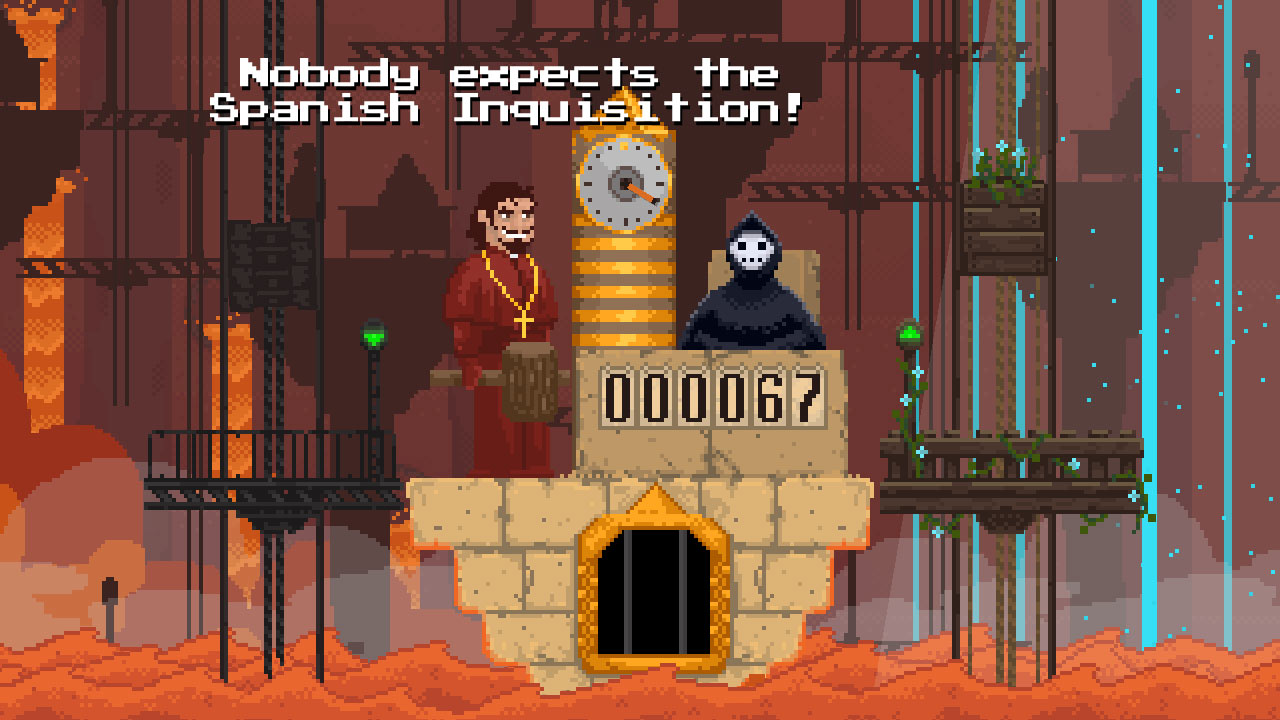 Purgatory is the most complex of the games systems, and the easiest way to make simple slip-ups. Later in the game, when humans can have multiple things that can be removed (for example, blood stained shirts, blood stains underneath them, any weapons they are holding etc), in theory, you’re meant to remove each one of these separately to check, thus increasing the margin for error in the event you forget to check something. The problem is there’s nothing to stop you simply button bashing your way through this system, quickly showing that, indeed, human #4 is definitely not letting go of his sword and is destined for hell. It’s a shame because it’s such a cool addition to the game’s ground works, but one that’s so easily bypassed by not setting limitations.

Other additions come thick and fast, like in your second working week, where occasionally you’ll need to take calls rather than see your victims, basing your decision making on a description rather than a visualisation. These descriptions are sometimes very much to the point, such as “I’m a man holding a knife”, and you know where they need to go, but sometimes they’re so oddly vague it makes it incredibly difficult to work out what you’re meant to do. It’s not because you’re not working it out properly, the game’s just not clear enough with the description’s they give you sometimes.

Successfully progressing through Peace, Death unlocks skulls which can be spent on either minor upgrades or things to make levels more difficult. You can be the judge of whether these are useful or not, after all, spending your hard earned points to punish yourself is a little masochistic, but if you find the overall shtick a little easy, then the options there. 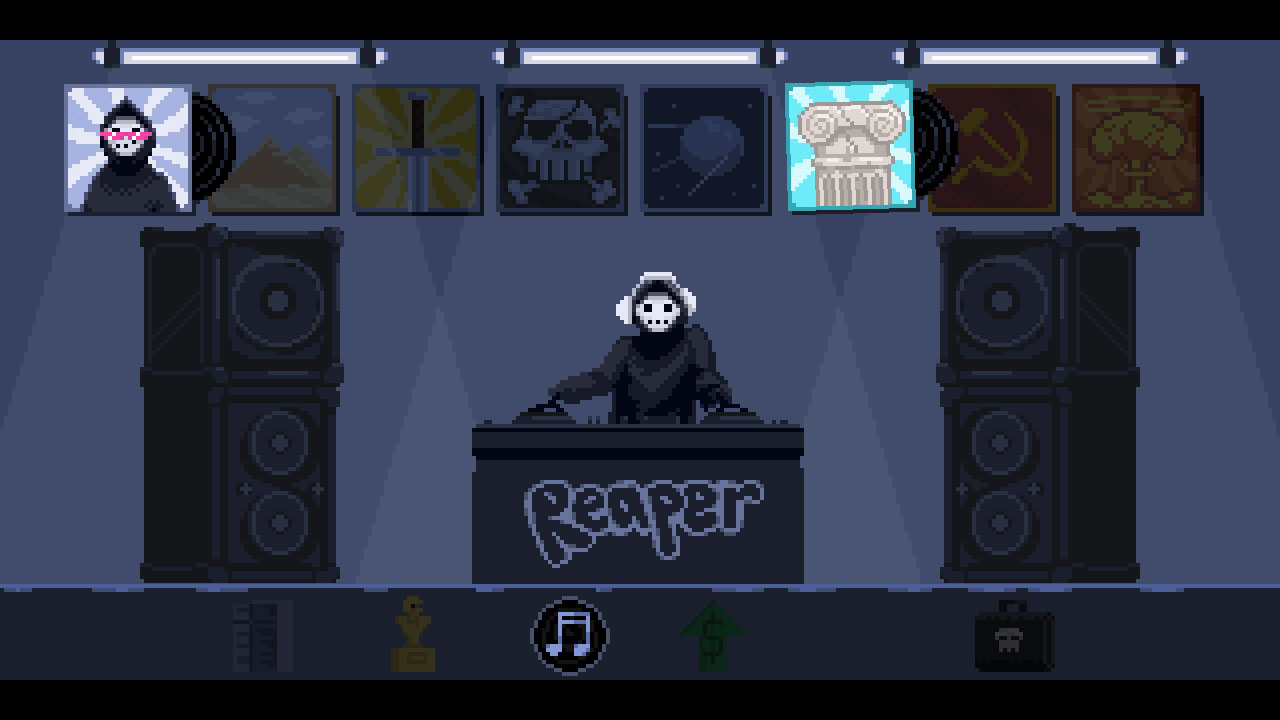 And as easy as it can be, more than anything else, the more glaring issue is the game’s repetition. Yes, there’s plenty of new things to look out for, new little systems and quirks, the game is much better in short bursts. When you’re deep in week four, it almost feels like a slog to have to work through 70 or so characters each level, especially when, really, you’re doing the same thing over and over.

The pixel shaded underworld is fine for the scope and light tone of Peace, Death, and the game relentlessly throws new characters at you. Many of these are fun takes on famous celebs and pop culture icons, and for the most part the joke doesn’t wear thin throughout the adventure. In fact, sending a sword wielding Jacksepticeye or horned Trump to hell among waves of Roman soldiers and Suit wearing businessman is the icing on the cake in the bizarre adventure.

Weird, tongue-in-cheek fun, Peace, Death is a simple puzzle simulation that’s great for passing the time in short bursts. Like a hybrid of Papers, Please and Reins, with the gameplay of the first but the humor of the second, Peace, Death is a fantastic middle ground for fans of the genre.