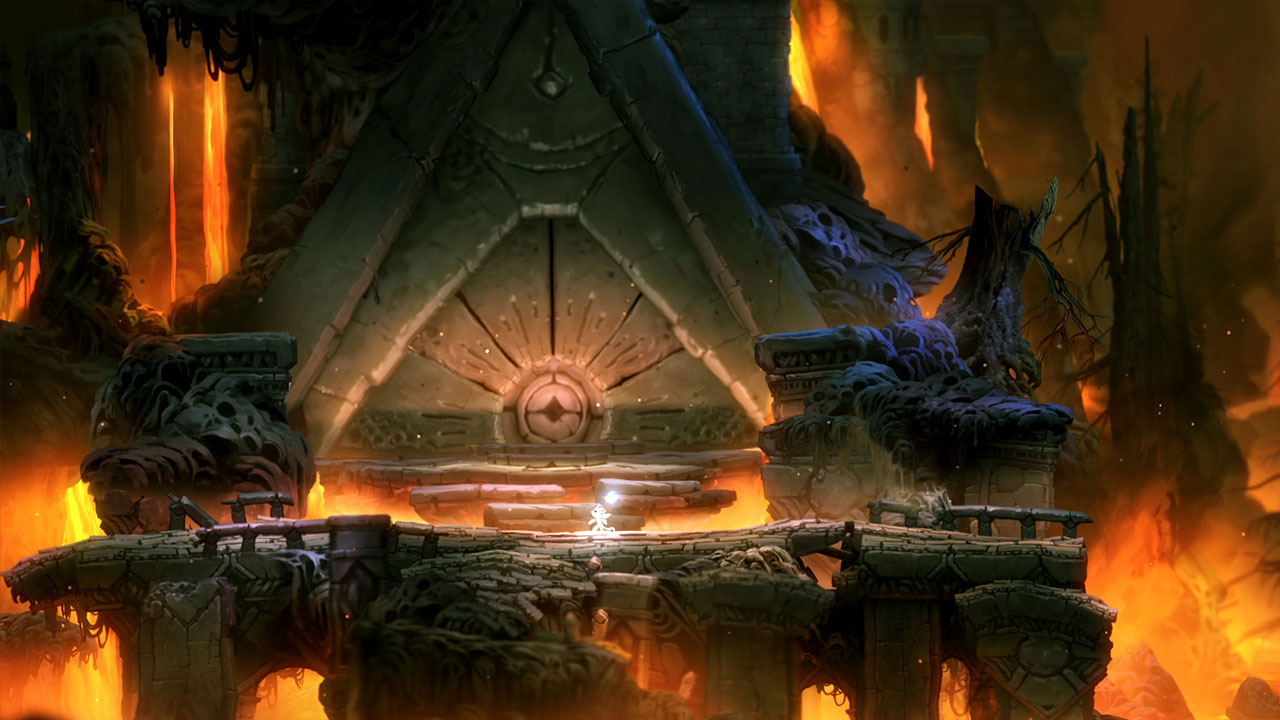 The friendship forged between Nintendo and Microsoft is an unlikely one, to be sure, but not one that can totally be unexpected. After all, there’s something inherently maverick about the two companies, marching along to the beats of different drums and still moving forward, though in different directions. Nintendo has a massive stranglehold on the Asian market, having finally freed the common people and the 18+ anime fans from Sony’s clutches, and still Microsoft has the brass balls to put their console in Japan’s backyard, keeping up a friendly competition that they’re losing on that side of the world. On the other hand, Microsoft, in spite of not having a ton of exclusives, keeps North America enthralled with a decent online system, bargain-priced titles, and a great cooperation with any other company that wants to play. We’ve seen Cuphead march his merry brand of hardcore gaming onto the Switch, and we’ve seen Banjo-Kazooie leap out of the Rareware Collection and land in Smash. Now, one of the most beautiful, engaging, and genuinely great games to land on the XBox floats gracefully onto Nintendo’s own eShop, and fans around the world should be rejoicing. Ori has finally come to the Nintendo Switch.

Ori and the Blind Forest is this wistful, almost peaceful tale about Ori, a guardian spirit which was born from the Spirit Tree, the natural entity that rules all the land. One day, a massive storm rips Ori from the Spirit Tree and flings him into the home of Naru, which is some kind of gorilla-like beast that lives, happily, deep within the forest. Ori, having no memory of the Spirit Tree, lives happily with Naru until the fateful day that the forest begins to die. Unbeknownst to Ori, Kuro, a gigantic Owl, has stolen the core of the Spirit Tree, and this has caused nature to wither, and starvation, including Naru’s, to become rampant. Ori quickly discovers Sein, a ball of light who is the eyes and heart of the Spirit Tree, and embarks on a quest to restore balance to the land and bring back hope and life to all. The journey isn’t easy or simple, but Ori is not alone, and there is no greater calling than to save nature as a whole.

Ori and the Blind Forest presents in a true metrovania fashion, giving players a massive, labyrinthian map that gradually becomes more and more accessible as you move forward and discover additional powers. Ori initially starts merely being able to jump, and, upon finding Sein, is able to do a sort of remote attack in the form of a light strike. The forest where you live, called Nibel, unfolds as Ori gains the power to climb walls, double jump, glide through the air and more. These skills that Ori obtains through found items are also assisted by Abilities, which come in the form of a circular, multi-pathed tree that expands as your Skills do. You get sort of experience points from destroying enemies, and these points, in turn, unlock the Abilities, but you can’t put the cart before the horse and just dump everything into the arguably “combat” arch of the Ability Tree. Eventually, you’ll need to wait until Ori reaches a certain milestone in the game before you can continue to tack onto that leg of the tree, so, overall, you’ll be able to flush out the tree in its entirely over the course of the game without needing to grind bad guys for the additional points. 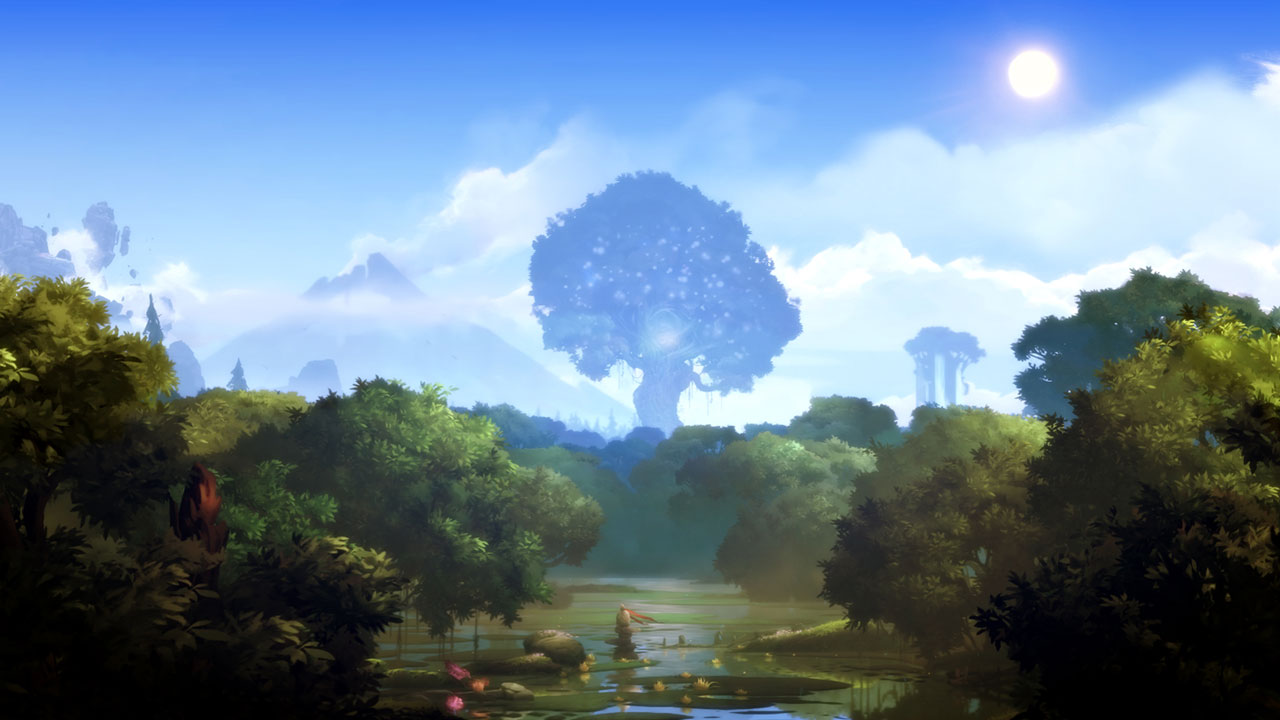 From the screenshots and videos, you’ll surmise that Ori and the Blind Forest is a beautiful game, and that’s probably one of the biggest pulls you’ll get for people coming in. Nibel is a complex and wondrous area, from the cozy nook where Nabu and Ori lived to the cavernous and webbed lair of the spiders. As there has been an infection that’s both poisoned the land and created aggressive beings to attack Ori, there’s a vein of pinks and purples that runs throughout, acidic colors symbolizing the corruption of nature and also to showcase the before and after effect of the cataclysm and Ori’s efforts to restore balance. You can really get swept up into the setting of the game, drinking in every detail of the canopied treetops where you explore and bound to the realistic and dangerous fire that crackles and tears through the land at the most inopportune time. At times, when the camera pans out to show the scope of Nibel and Ori’s role, you can feel yourself holding your breath, taking in everything that’s been painted before you. From the initial moments of Ori’s windswept journey to Nabu on the wings of a storm to the final, promising scenes of a new beginning, Moon Studios captures the audiences’ hearts and attention with a design that feels like a painting brought to life. The visuals are aided by an atmospheric, symphonic soundtrack that help to paint an even more vivid picture of Ori’s journey. As some soundtracks can help to inspire you to work harder, focus more or become energized, the intent of Ori’s predominant tracks (with a couple of small exceptions) are to keep you calm and stay in the realm of Nibel and the role of Ori: an immortal guardian spirit who has a difficult journey ahead, but not an impossible one.

The mantra of “difficult, not impossible” should be repeated multiple times over the course of playing Ori and the Blind Forest, because this game, truly, is difficult, and in the best way. The different areas and realms are carefully constructed with plenty of obstacles, enemies, and traps that will almost certainly get you once or twice before you realize what you need to do to cross a certain sector. Bounding through the forest, finding hanging platforms to carefully land upon, quick successions of leaps to avoid incoming projectiles and charging enemies, and knowing where and when the ceiling will suddenly come rushing at you with a one-hit kill shot, you need to be careful and calculating, sometimes memorizing small aspects and simply testing your luck with others. One of Ori’s earliest skills is the ability to create a save point/spawn point wherever Ori stands, as long as you have enough power in reserve, and it’s something that you need to train yourself to do in moderation but frequency. The actual save points (which also serve as warp points) are few and far between, and there’s nothing worse than getting through a huge segment of rapid fire dangers and near death experiences…and promptly misstepping onto a huge pile of obvious spikes. When did you last save? Do you remember? If you don’t, it was probably a while back, and you gotta do it ALL over again. 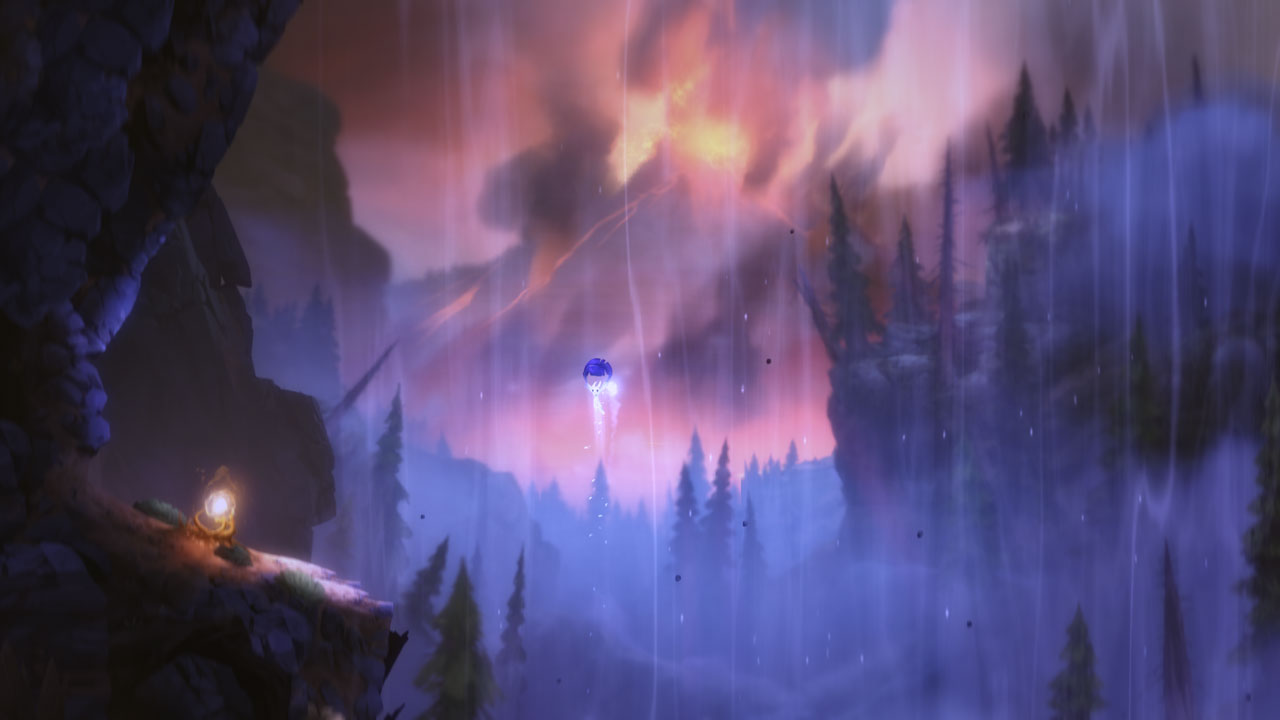 Thankfully, Ori and the Blind Forest delivers in a huge way on the Nintendo Switch to keep the overall game and replay identity great and enjoyable. The game runs absolutely buttery smooth, with zero hiccups, drops or sudden jumps that could leave you in a bad state. I played the game with JoyCons, with a couple 8BitDo controllers, even with a WiiU Pro with a 3rd party adapter, and they all handled the game marvelously. There’s something almost sexy about having a series of buttons that you need to push that flow together well, and Ori showcases this with jumping, dashing, backwards leaping, timing the attacks with Sein just right and landing perfectly, squirrel style, with everything exploding around you. If you think the game is coming across too easy, ramp up the difficulty and go from Normal to Hardcore, or even try and Deathless, one life run: I know I’m not going to because I suck, but the option is there for the determined. Additionally, if you want to focus on the surprisingly complex story of the Spirit Tree and Ori and Kuro’s roles, you can ratchet down to Easy and take a bit of a breather, with less aggressive, weaker enemies and a bit more forgiving of a game.

The friendship between Microsoft and Nintendo just gets better and better every year, and Ori and the Blind Forest: Definitive Edition is a perfect example of how the community benefits from these relationships. A previously exclusive title, now on the Switch, at a very reasonable price, and it runs beautifully and has a ton of gameplay to invest in. If you’ve ever been curious, now is the time, and the Switch is the place. Come along on this magical journey and see for yourself what hides within the trees.

The stunningly beautiful, impossibly difficult and timelessly endearing tale finally leaps off the XBox to come and nestle, safely, in the arms of the Switch.