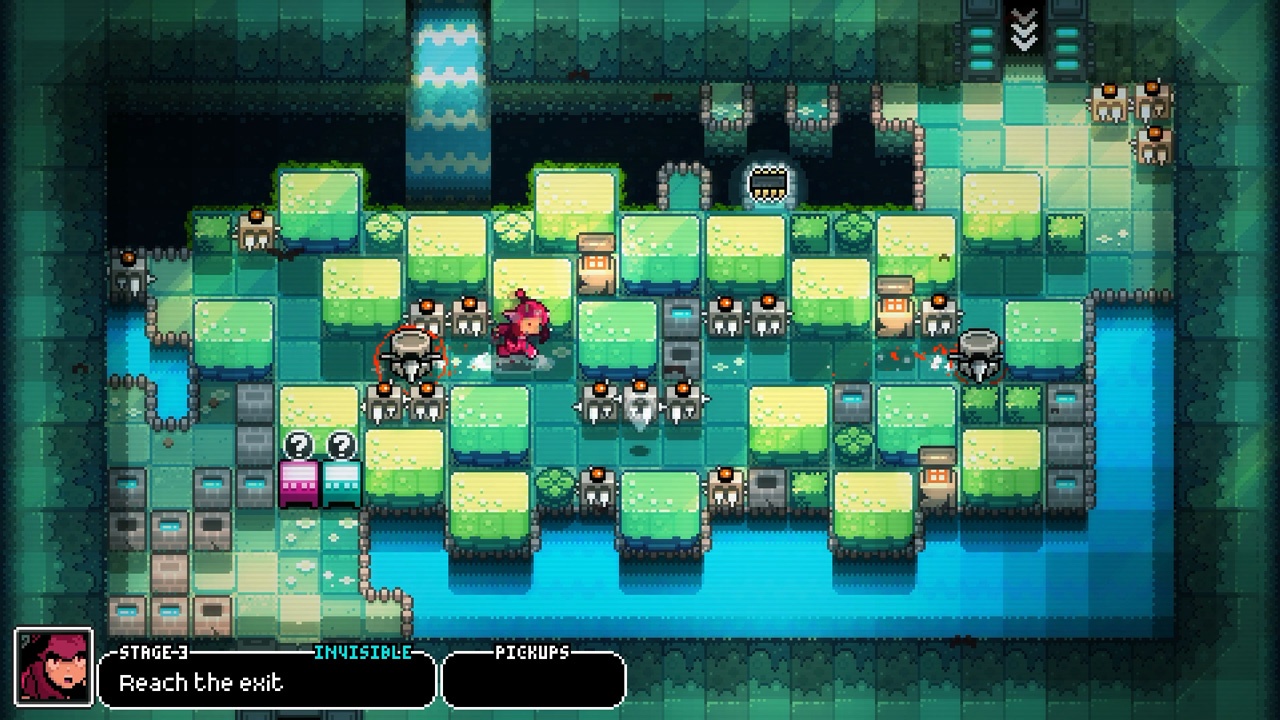 In the world of video games, there are few titles that I looked at and said “awesome, but.” They have these fantastic ideas that make sense on paper, and sound so cool in theory, but they just fall apart in real life situations. Many years ago, I was told all about a game that was a first person shooter where everyone was invisible and the only way to win was to look at your opponents’ screens, discern where they were and hunt them down. Very cool, in theory, because I grew up playing Goldeneye and was doing that anyways. However, in practice, it was sort of a novelty that got a bit frustrating fast, demanded couch co-op (online was available, but it didn’t feel right), and wore out its welcome on my computer after just a bit of time. Still, it felt like there was something to this: it just needed to be done differently. Sombr Studio must have had the same feeling, because their game, Invisigun Reloaded, manages to scratch the itch I desperately couldn’t reach, and adds just a bit more for good measure.

Invisigun Reloaded is, as you’d imagine, a game about players equipped with special guns that make them invisible. From the beginning, the biggest difference from another game that I didn’t mention is that Invisigun is a 2D, top down, grid-like game that feels like Bomberman inspired maps, and that works out fantastically for me. Instead of being disorienting and giving you a headache from trying to calculate where and when you are, Invisigun Reloaded is, at the core, a twofold game of patience and opportunity. When it comes to moving around the map, firing a shot, any shot, will make you momentarily visible. But that’s not the only thing. If you bump into a wall, the wall will shudder and make your presence known. If you splash through a puddle, you’d better believe your rippling footprints will be a siren’s call to players. If you step off a ledge or onto a bed of spikes, your death animation could be a signal for other players to start moving ass, because now they know you’re one point down and they need to try and secure their top spot. As the match progresses (if you have this turned on) power ups will drop from the sky, trying to turn the tide of battle. These can involve speeding up shots, erasing your footprints, or even revealing all the opponents on the screen for a short period of time. Putting things in 2D also levels the playing field by making it easy to see the whole picture while still making it difficult to try and remember where you think everyone might be. 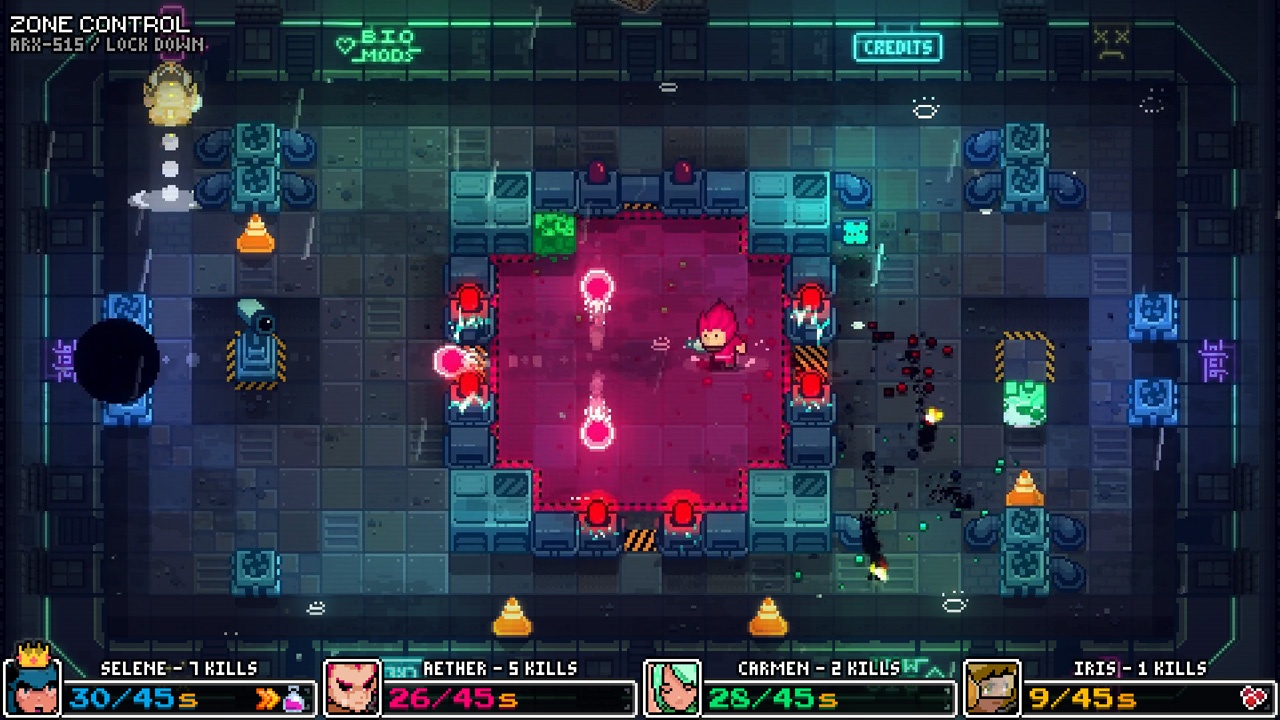 If this was it for the meat of Invisigun Reloaded, it would still be a decent game, but Sombr Studio didn’t want to just take someone else’s idea and make it 2D. Instead, every hero you can select also has an ability that can drastically change the tide and positioning of battle. There’s one hero that can create a ghost of herself, tricking players and potentially stunning them with phantom bullets. There’s a player who can leap over obstacles, making their gameplay strategy wildly different than the others. There’s a player who can launch a damn drone that can detect where invisible players are, WHICH IS INSANE, and, my personal favorite, there’s a dude who can slash shots out of midair with his sweet sword and absorb that shot power to make a super shot that’ll cleave through some obstacles and straight into your opponent’s hides. While some powers might seem stronger than others, it’s important to remember that the game is deliciously balanced to make things right and enjoyable for all.

“But how can I decide who to play as?” you beseech the game and article, and Invisigun Reloaded has you covered. For the times when you can’t get together a local or online group, there is the single player campaign mode that acts as a surprisingly challenging stomping ground for new and old players alike. The single player mode changes up the tone of the main game, acting more like a puzzle adventure than anything else, asking the player to get through nine different, equally difficult rooms of puzzles in order to “win” the overall campaign. If you want to see what it’s like to fully explore as a character, this is the place to do it, with the added bonus to go and find a series of computer chips that are strewn about. Everything like colors and characters are unlocked from the get-go, but the chips help to unlock the all-important emotes, which are the best way to establish your personality and severely annoy someone online when you’re playing. I would recommend that you use the single player campaign for all the characters, as it’s a more robust test of their abilities and honestly doesn’t take long per character, plus it’s better than just hanging out in the Research Lab between games. Oh, the Research Lab is where you can just generally experiment with how each character works and how they interact with different kinds of obstacles, but it’s more of a proof-of-concept area than any actual playing. Seriously, do at least one single player, it’s worth the journey, and shows how devious Sombr Studio can be in designing rooms. Also, this is a good place to use the “Shadow Mode” to see an outline of your character for the whole play and better understand how your characters move and get down the timing so that the controls don’t screw you.

Additionally, if you’re not one just for simple “kill the mostest” sort of gameplay, Invisigun Reloaded contains several different ways to kill in order to be the best. You can be the last one left alive, you can have the most kills, you can kill the most in a certain amount of time, or you can do something entirely different. Be the person who stays alive and holds onto a token the longest. Take control over the most amount of map area and maintain until time runs out. Hell, learn how to tame beasts and make them your friends in a very different and very oddball game style! Not to mention each and every one of these styles can take place on different “planets” with different terrains, from calm forest glades with flocks of birds whose departure will signal your position, to a factory-like planet complete with teleporters and conveyor belts, because you’re never in control of your own movements. Hell, there’s a planet that just has supporter created maps, and they’re rough as hell to try and get through on any mode, but it’s a possibility! The number of combinations is massive and the gameplay value is off the charts. 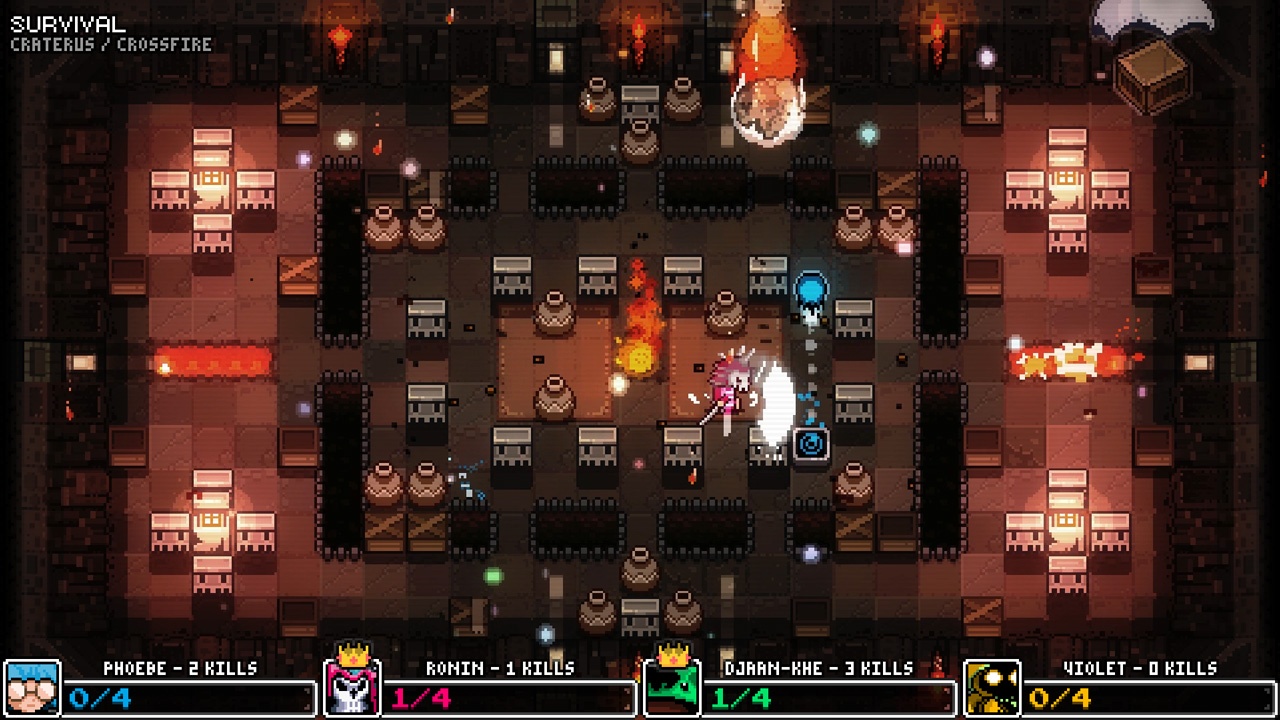 Invisigun Reloaded has a great art style that manages to deviate from”pixel art” while still maintaining a bit of a retro feel to it, like later stage, smoother 16 bit delivery. Every single character is quite recognizable (well, when you can see them) and the obstacles all have unique and different identities. You’ll never confuse a bush for tall grass, and there’s no confusion over what’s safe ground to walk upon and what isn’t. The character portraits are impressive, giving a lot of personality to their presence and what they bring to the fray. It’s hard to really comment on the visual design of a game where the inhabitants are meant to be invisible, but Sombr Studio didn’t phone this one in: it looks good, and it feels good.

I sincerely hope Invisigun Reloaded takes off on the Switch, because it’s a great fit and has a massive amount of potential. Obviously it’s a lot more fun with other players, as the bots rarely trash talk back, and opening it up to both online and offline play means dragging others along on the journey at the drop of a hat. The design is, surprisingly, endearing, and the versatility of players, game modes and information is just impressive. Check out the Field Guide to better understand what you’re dealing with, get wins to unlock different shot types, personalize your game and make Invisigun Reloaded your own. This is a trip, and it’s incredibly fun, and I hope I see (or don’t see?) you out on the battlefield.

One of the best multiplayer games in recent memory, Invisigun Reloaded brings so much more than just a gimmick to this online and offline competition.