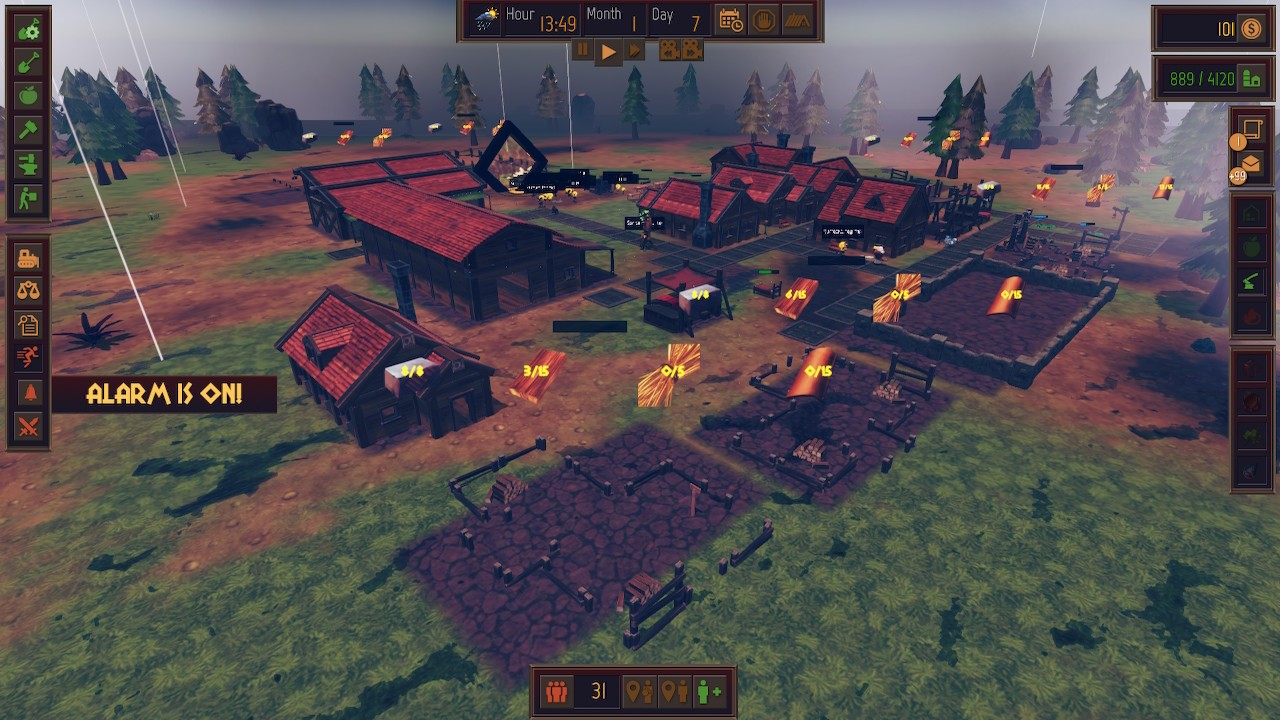 Building simulations and time management games have, honestly, never been my thing. There have been plenty of great moments I had with the ideas in the past, like SimCity, Civilization, and even Diner Dash, so I’m somewhat familiar with the concept. However, as I’ve grown older, the idea of trying to keep a ton of plates spinning at one time while keeping other tasks at hand has been, to say the least, a jarring notion that I want no part of. I’m playing video games to relax, dammit! However, there was something about the trailer for Community Inc. that made it seem like I would be into the product being sold. Maybe it was the TinyBuild name attached to it, the gentle piano music throughout, or maybe it was the time limit set that actually enticed me. I’ve heard people dumping weeks into modern games, and that seems quite scary for someone used to going through a couple games a week (or more). So, with a dash of trepidation, I jumped, feet first, into T4 Interactive’s Community Inc.

The concept of Community Inc. is a simple one: meet the goals set forward by an unknown “company” in thirty days time to make the village/town that you’re building the most lucrative and profitable one possible. As an all seeing entity, you are in charge of the Lings, a humanoid race of people who are sort of, kind of at your beck and call. You see, the Lings very much want to be a happy part of this community, and that requires you to make sure they’re well fed, rested, cared for, have shelter, don’t get eaten by wild animals, etc. As you set out to meet your goals (have a certain number of villagers, so many buildings, high happiness rating, etc.) a series of random events may or may not befall you, and the good are quite good (yay, new race of creatures want to help me!) or bad (what the?…a meteor storm and I am not ready!). No matter what the way the wind blows, you’ve got a mere 30 days to get everything in order, and time passes quite quickly in your little hamlet, so buckle in and get ready: there’s a wild ride ahead. 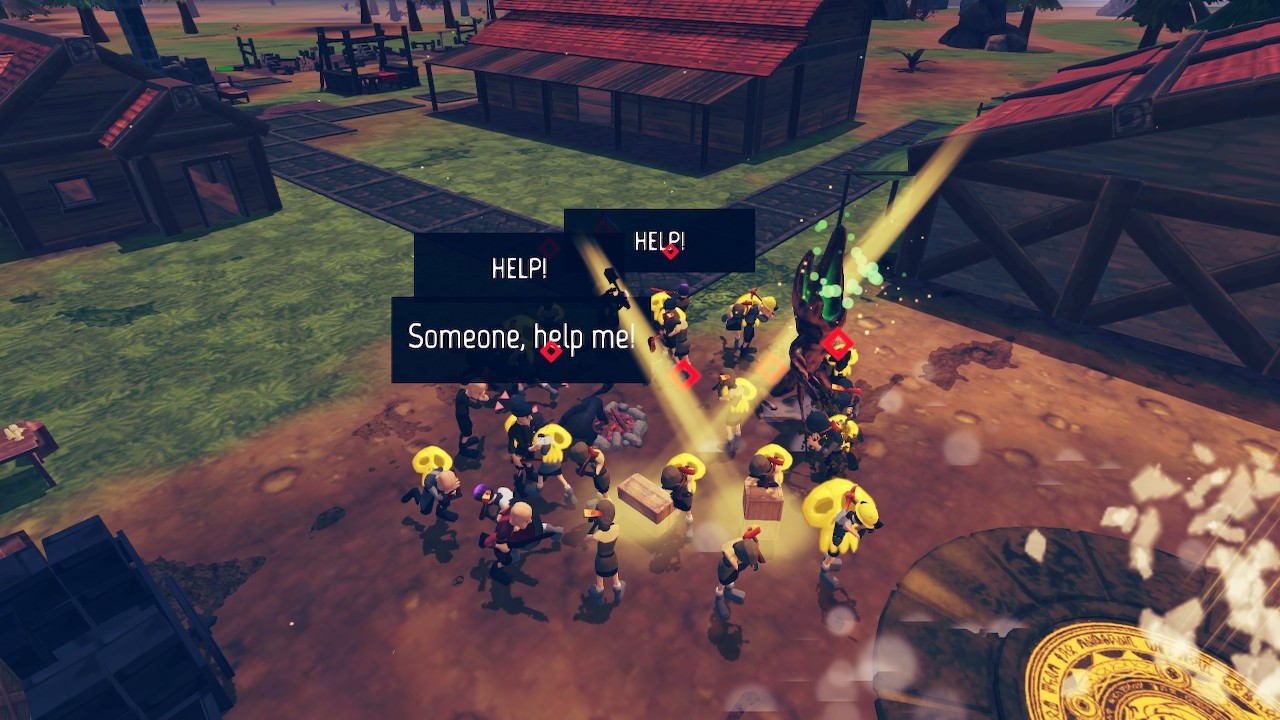 Community Inc. takes a different perspective, quite literally, on city building, at least from my experience, by allowing a sort of overhead, 3D-esque view of the village that you’re controlling, and this almost immediately leads to a few problems for the startup of the game. Due to the way that the camera sort of slides around, you can easily miss some details if you’re zoomed too far out or in, which can be critically bad in terms of getting to things in time. In the tutorial (which you’ll need to play), I couldn’t find the corn plantation to harvest for like a full minute due to the way the screen presented and the abject darkness of what dusk and dawn look like. With no settings to adjust gamma or brightness, you’re left at the mercy of whatever your television or Switch looks like, so I’d recommend using the television. Not only do you stand a better chance of discerning what the low-resolution textures are of everything, you also can focus better on the button controls and not the mostly non-existent touchscreen. Despite a sprawling screen of buttons and options, touching the screen of the Switch only allows you to move the camera around, which was, to say the least, disappointing.

Once you get over the visual hump of it all, Community Inc starts to dish out options for what’s happening, and there are a lot. Your Lings can be assigned different jobs, such as building, farming, mining, and hunting, though you’ll need the appropriate equipment to make it all happen. Also, some actions will be automatically performed, but others will not. Again, if you start a plantation of vegetables, the Lings will have no problem planting that crop, but you’ll need to tell them to harvest it, and failure to do so will leave your precious food languishing around, waiting to be stolen, destroyed, or just gather dust. You can have a Ling build a workbench, and then have the same Ling create equipment from it, but most of the other Lings will not do a thing unless you tell them to do so, even with “Auto Forage” automatically turned on. The initial setup of the game can be a lot to take in, so I highly recommend doing at least the first two stages of the tutorial, belligerent as they may be, so that you can really understand the process to NOT instantly have your game turn to ash, because, sadly, that can still happen at the drop of a hat unless you straight up turn off events.

T4 Interactive probably has some fond memories of things going wildly, unexpectedly wrong in SimCity 2000, and I also share those memories. Things like hurricanes, earthquakes and even UFO invasions would spice up games like that, turning otherwise humdrum city building into things that are unpredictable and exciting. With Community Inc., it’s an incredibly mixed bag that can feel, at times, overhwhelming. It may have just been my experience, but the bad events seemed to outweigh the good in terms of scale. Like, having other species interact with my Lings and make decent contracts that are easy to fulfil: awesome. I really enjoyed when my little village decided to make friends with golems and foxes and then we built good relationships from trading fish and such. But when things went wrong, it went insane. We’re talking multiple illnesses, the aforementioned meteor strikes, and Lings just straight up DYING with little to no preamble. This felt a bit harsh, because, well, when a natural disaster struck in city building games, you gotta make new buildings but the populous was more just a numbers thing. When you’re ground level with your people (whom you can individually name and such), it means a lot more when wolves start eating them. Oh, the way that it looked when the Lings fought back against invading animals was dope, but I was still keenly aware they were being demolished. 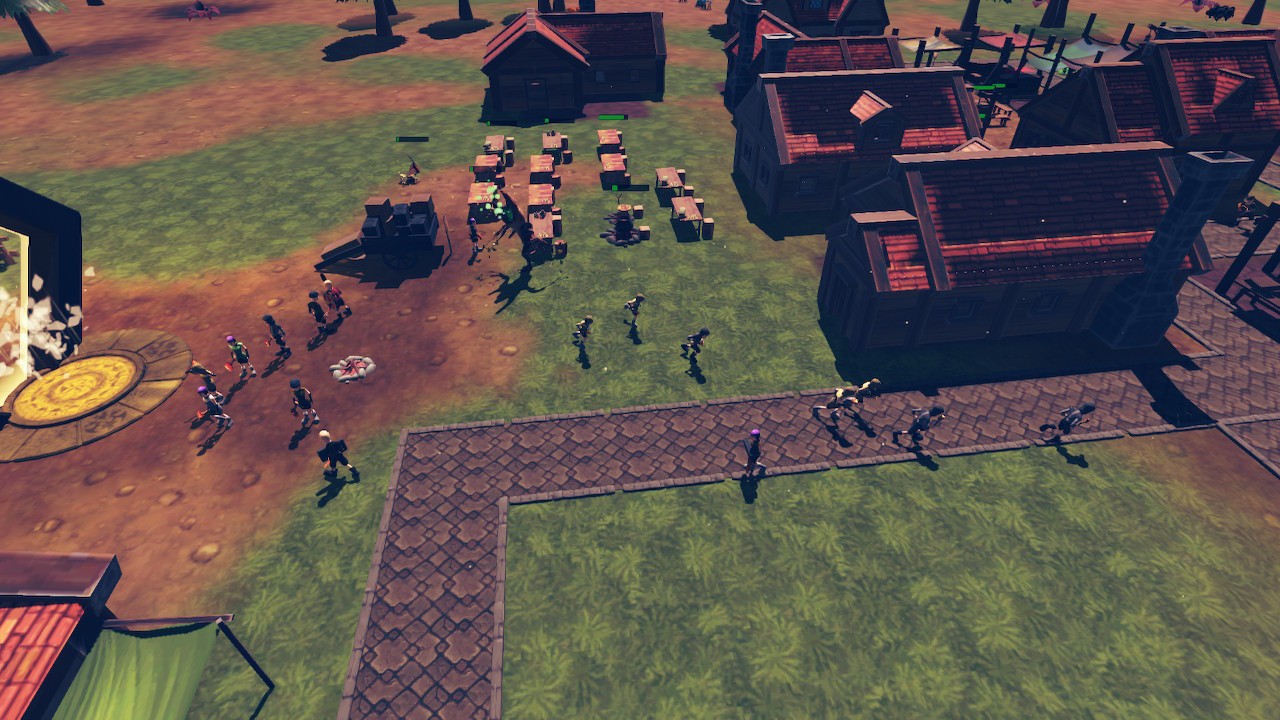 The one thing I really liked about the razor’s edge of Community Inc., balance was the happiness meter and what it meant to be unhappy. When it came to titles by Kairosoft or such, an unhappy employee or guest was often unproductive, sulky, didn’t make money or just wasted your time. But for the Lings, having to go days without eating or sleeping on the barren earth didn’t just mean breakdown in cooperation: it was a straight up breakdown in society. People fighting each other, Lings actually setting fires in protest of their displeasure, it was sort of a marvellous thing to behold. Now, I do think the Lings were, at times, quick to jump to arson and assault, but it was something I could identify with. There was so much I was frustrated with in terms of trying to keep the game going because, after an initial grace period of slowness, things come at you fast and furious, asking you to provide everything and retain nothing. I was honestly and truly trying to make a couple of hundred people happy, move the civilization forward, prevent deaths and do it all in thirty days so I could sell it at a profit, get some cash, and use that to make a better Community with a bigger loan next time. However, if I decided to level my own buildings, it would seriously reduce the appeal of my land. So, yes, little Ling with a torch, I see you, and I feel you, but I gotta stop you, because that house is the last one I need for my objectives and I am getting the hell out of here tomorrow.

There’s a lot to work out in order to decide if Community Inc. is worth it for you. On the one hand, the variety of modes like Peace Mode and Freeplay remove some of the random elements, effectively neutering the game from what makes it so complex in the first place. On the other hand, working in normal mode means risking some bad NRG that doesn’t feel “unlucky,” it feels straight up unfair. And, on a third hand, the game physically doesn’t handle well with the buttons needing to handle everything and needing to pause every six seconds so you can fumble through menus to assign a new cabbage patch. The price isn’t bad at all for the amount of content, and the soundtrack is soothing in spite of the events at hand. I didn’t find myself addicted, which could be a death knell for this sort of attraction, and I would rather use this game as a reminder to myself that I am simply not in tune with the safety and progress of other people. Don’t totally dismiss it, but really consider before you dive into this bizarre tale.

In spite of some promising ideas and darkly humorous events, Community Inc. fails to deliver on time, owing to poor controls, bad NRG and murky graphics.