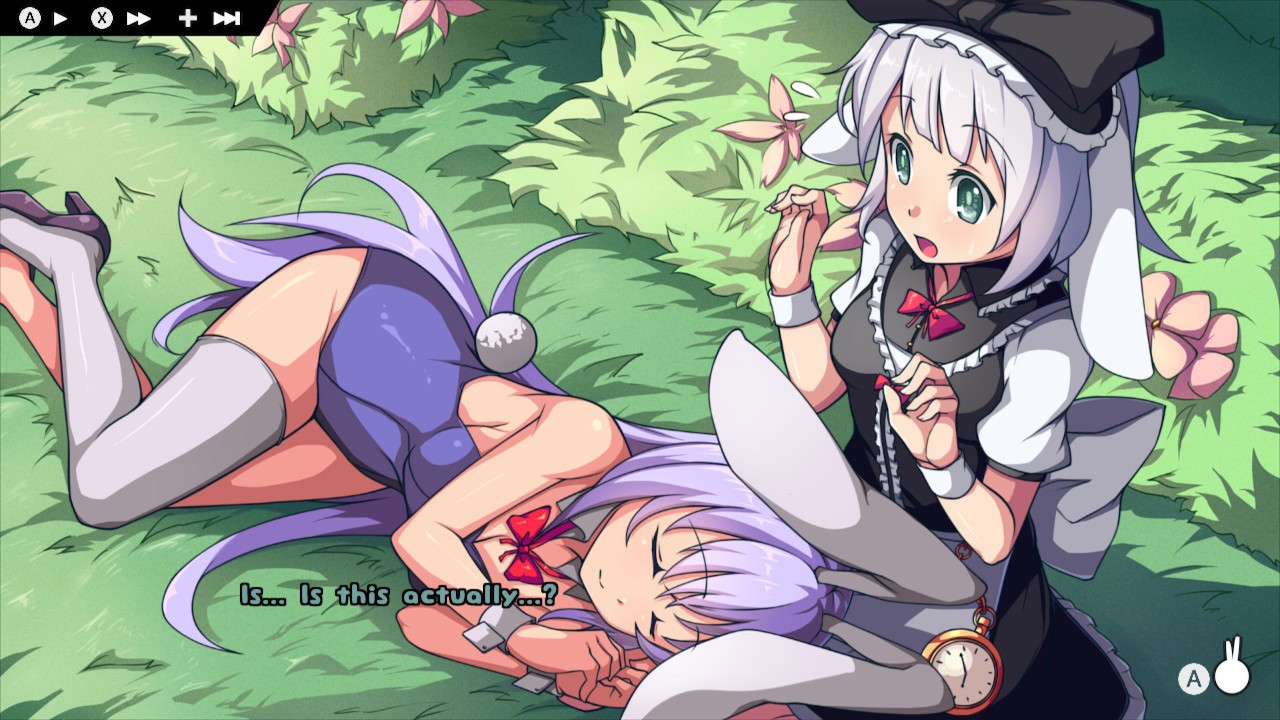 Circle Ent has such an interesting stable of titles that they get behind. They can be very indiscriminate about what they choose to publish, which is both good and bad: awesome rhythm games like Deemo and VOEZ live under the same roof as odd titles like Button Button Up or Mantis Burns Racing. On the other hand, they also try to bring us some interesting titles that have odd gameplay mechanics, which can be insightful as to what makes the other side of the world tick in terms of gaming, such as WILL: A Wonderful World. The bullet hell genre might be spread every which way but loose, yet there is always going to be a call for the right ideas executed in the right style. Which is why one of the best, most difficult games in the last few years doesn’t have giant fighting spaceships, or mystical alien species: it’s a bunny, her fairy companion, and a wacky, offbeat, and surprisingly poignant cast of cute supporting characters.

Rabi-Ribi (my computer is going to die from trying to autocorrect that title so much) is the tale of a bunny. Not a bunny girl (not at first), but an actual bunny by the name of Erina, who, much to her own confusion, is turned into a bunny girl. Not only is this bizarre in and of itself, it’s equally weird because the island of Rabi-Rabi, where a majority of our story takes place, is overrun with bunny girls who are obsessed with trying to catch real bunnies, which puts Erina in a bit of a pickle. Thankfully, Erina quickly runs into two great things: the first is a hammer, who will become her best friend moving forward; the second is Ribbon, a magical fairy whom takes a shine to Erina (after realizing Erina doesn’t want to eat her). Together, the two of them manage to make their way across Rabi-Rabi island, having battles with a couple of characters and ultimately getting back to the village where Erina’s master, Rumi, is worried about her missing bunny. Thankfully, for the longevity of this game, getting back to Rumi is only the start of the adventure for Erina and Ribbon, who now must help out the inhabitants of Rabi-Rabi and also solve several mysteries, such as what is the Stele, and where did Rumi’s sister go?

Rabi-Ribi, which is a nod to our two characters (a rabbit and Ribbon), is a metrovania style exploration with some of the best and most open choices that I’ve seen in a game. As Erina and Ribbon set out, their path is only really directed in the prologue, as it gives you both a sense of how the game plays and where you need to go to begin. Once you touch base with Rumi and begin to help out the village, you’re free to go whichever way you’d like to try and accomplish your goals. Erina is limited, somewhat, by what the island allows her to do at first: she can only jump so high, and certain landmarks and terrain can only be moved/destroyed by certain additional items. However, as you uncover more and more items, you’ll be free to double back and check places you previously could not fully explore, usually unearthing additional power ups and “badges,” which are actual equipment that you need to balance as you wear them (limited number of ability points means no wearing every single badge you ever find). You’ll also run into a massive cavalcade of bosses, mini bosses and general monsters, all ranging from the “cute” to “incredibly cute” levels that you can imagine exist within this game. 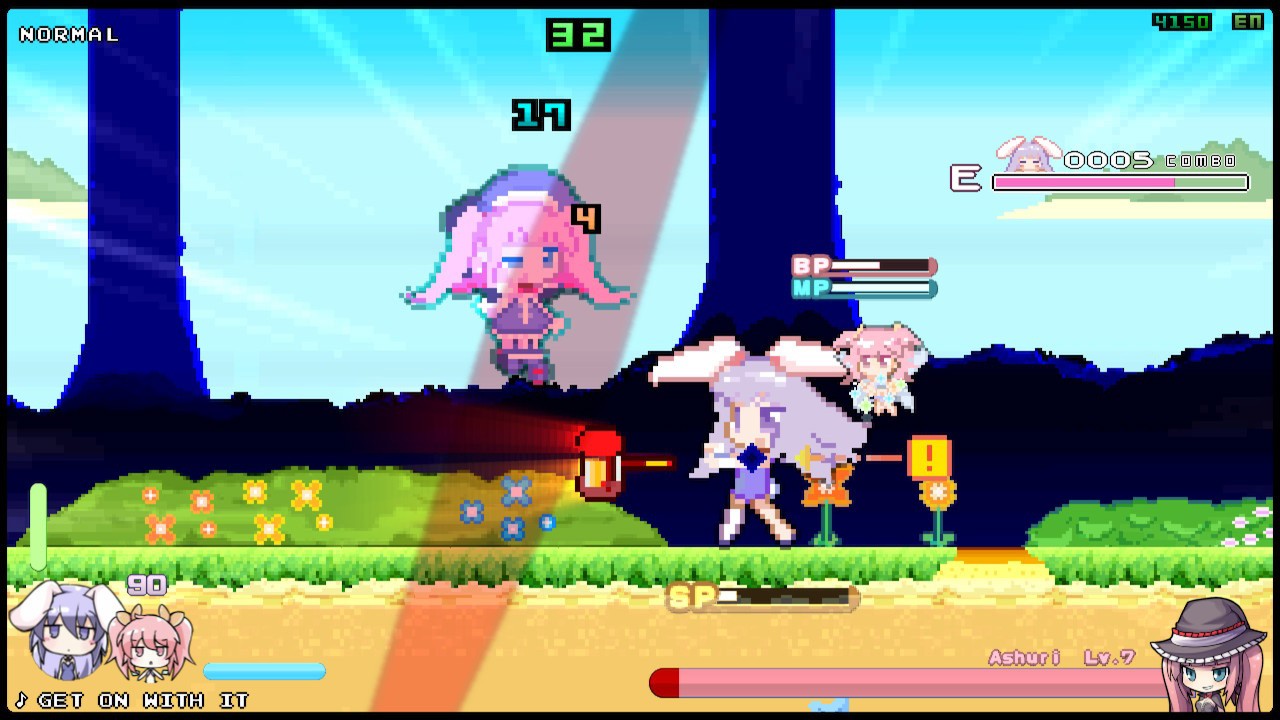 The exploration aspect of Rabi-Ribi is phenomenal in that it rewards your memory and punishes your impetuousness almost every time. To best get through the game, Erina must explore the maps thoroughly, finding all sorts of powerups and additional equipment to make her stronger, faster, more defense, better jumps, etc. However, a lot of the items that you “see” are never easy to get to, and rushing to try and reach them can often result in you needing to do it all over again. There were several times where jumping between screens resulted in a split second of regret as I saw the platform I was supposed to land upon go flying past, and I ended up landing way back at the bottom of the stage, forced to climb and try again. The monsters respawn fast enough, so it’s not even like I got a leisurely stroll to where I once was. This does show, though, that committing this game to memory (much like Super Metroid or even Bloodstained) gives you the edge in playthroughs, shaving minutes off at a time because you know to lean left or right to avoid repeating your mistakes. It’s satisfying, and creates a twofold replay value without feeling boring or insane. Additionally, because the misses are rarely ultra punishing (there are a couple times where missed opportunities are gone forever), you don’t end up resenting the game. Much.

For people who don’t always understand fandoms, you might be interested to know that Rabi-Ribi has developed a massive following, and it quickly becomes obvious as to why, as it hits upon a rare Venn Diagram of gaming that is usually seen in the Touhou franchise. On the one hand, the art style does allow for the cuteness and the mildly suggestive nature of the world to really take shape without going over the top. The pixel perfect character design gives unique identity to each and every one of the characters, from Erina herself to the cavalcade of Bunny-obsessed NPCs that you have to fight off. The smaller monsters are usually adorable, though I was never a huge fan of bees, whether they be cute or not, and the bosses have great presence in both vocal and visual display. When you get to dialogue cutscenes, you’re able to see artwork and closeup portraits of the characters, giving them more “dimension” and allowing for better confirmation that, yes, Chocolate and Vanilla from the NEKOPARA series are inexplicable guest stars here (or it’s just another black and white catgirl sister set, I dunno). When you get some artwork after a boss fight (like your encounter with Rita), there’s a little damage to her clothing that could pique the interest of fans, but not enough to be lascivious in any way. It rides a fine line, Rabi-Ribi, but it’s far further on the tame side than not.

On the other spectrum of the diagram, Rabi-Ribi is pretty hard. While you can set the difficulty level from the very beginning, it’s easy to assume players will be a bit caught offguard by the inherently cute and sweet presentation of the game. When you start off and Erina is just trying to hop out of the box she’s awoken inside of, you’d be forgiven for thinking this would be a short, mild adventure with a carrot undertone and a few quick jokes. What you wouldn’t be expecting, however, is a bullet hell environment that puts it on par with some of the great Japanese indie games. CreSpirit has definitely taken notes on things like attack patterns, bullet density and how much damage you can take before breaking your computer with the creation of Rabi-Ribi, and the detail and love shown in every single encounter. Putting the game on the standard difficulty allows for a gradual, frog-soup style indoctrination to the madness of it all, letting players gradually see how much harder the game becomes as you delve further and further into the mysteries and madness of Rabi-Rabi Island. Putting the difficulty higher means immediately going over your head, putting players in a seriously tough spot as boss after boss delivers screen-clogging waves of electricity, bullets and other elemental damage. 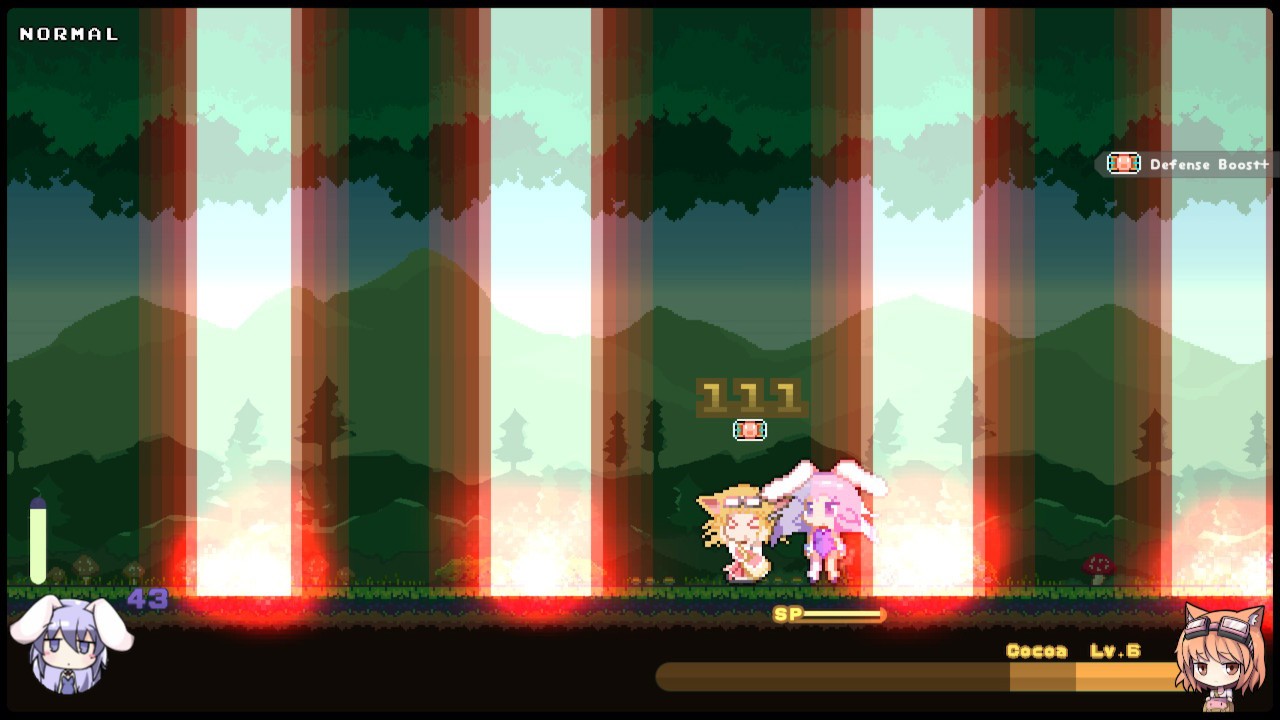 But that’s the great part about Rabi-Ribi: it’s not impossible. The developers responded to the requests of fans the world over (as evident by the Switch having several language options) by creating more content that made things even more insane. The ability to speedrun through the game if you’ve beaten it before shows that players crave the intensity of having one problem thrown at them after another. There’s been a ton of DLC released, both for fun and for increasing difficulty, that exists within this Switch package, and it gives the full experience for new and old players alike. You can figure out how to carefully construct Erina to make her as OP as possible to deal with the first few “final” bosses on lower difficulties, or you can attempt to run into the kawaii version of Calamity Ganon with just your original hammer and let us know how quickly you get turned into jelly. And the game leaves no question that your defeat or dismemberment is entirely on you: the controls are drum tight, everything has been playtested to the bone to make sure there’s little room for error, and the replay value (both in additional content and score attacks) proves that the fallacies might not be just you, but certainly other people have found a way to conquer the game.

With a stellar soundtrack that paints the island alive in more ways than one and hours upon hours of gameplay, Rabi-Ribi is a sound investment for anyone out there looking for the next great adventure to embark upon. It truly is equal parts exploration, precision based dodging, wonderful character exposition and some real passion for the craft. If you already own this game on Steam, I still would recommend to have a portable version because it’s a portable version of Rabi-Ribi. Unlocking everything all over would be a pain, but I said the same thing about The Binding of Isaac and that was another 80+ hours gone. For newcomers, don’t balk at the higher price tag: it’s got all the bells and whistles, it plays like a dream and it’s a console port: the extra few bucks is worth the investment. It’s amazing to see, super fun to play, and, until Nintendo gives me folders, will stay in the top ten on my Switch so that I never forget to go hopping along at least once a week.

Yes, the thumbnail looks cute, but rest assured: these cute girls will make your life a functional hell if you’re not ready for the intense gameplay they bring.