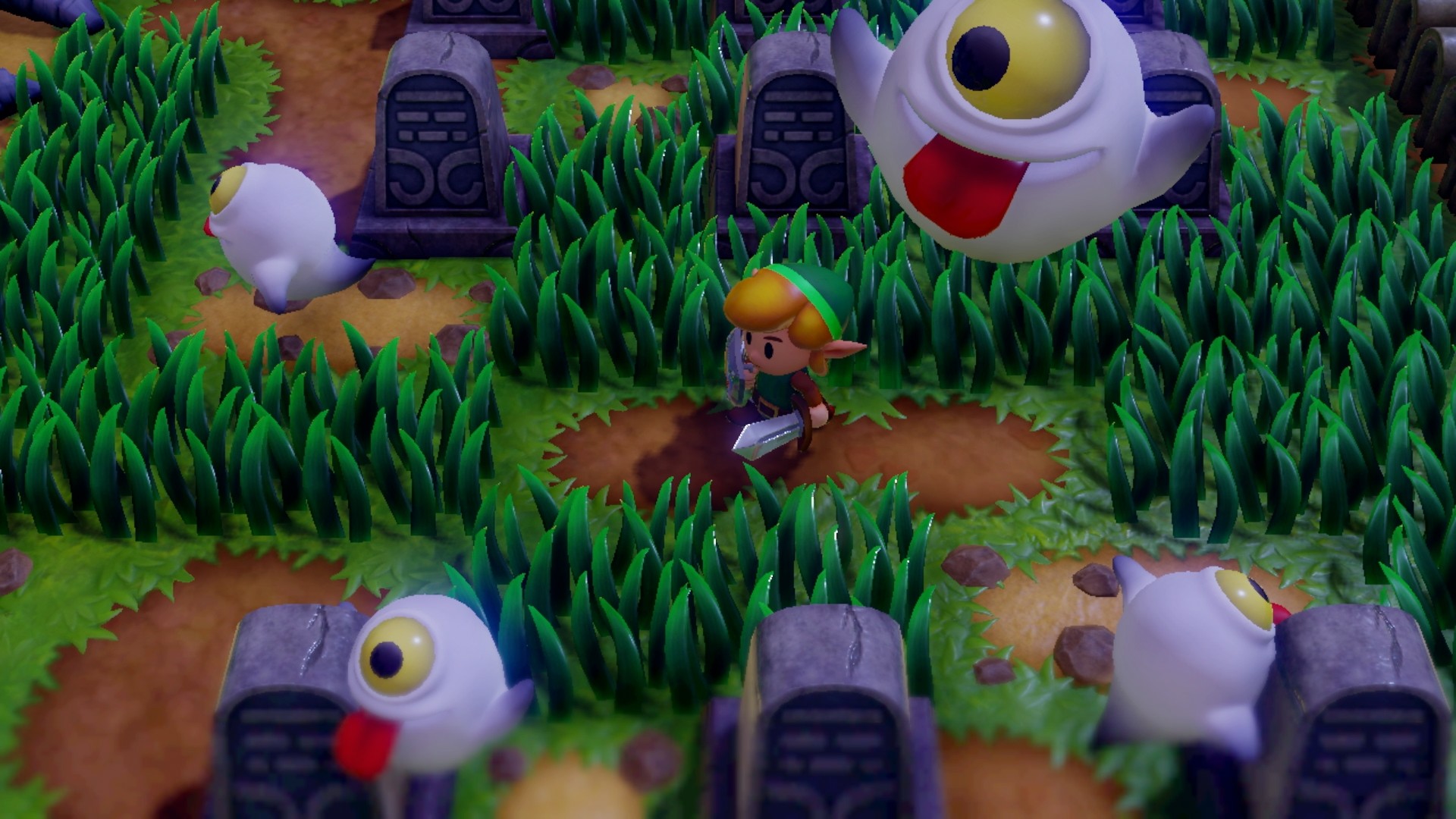 With so many remasters filling our consoles, often we commit to a title regardless of quality, purely because we’re blinded by nostalgia. Developers rely on our fondness of these memories, after all, why waste time on something new and potentially unsatisfying when you can replay something relatable with a face lift? You know you’ll like it, you’ve seen it all before, after all. It’s the same reason Hollywood is a sea of sequels and reboots – familiar stories we feel comfortable around that don’t take us far out of our comfort zone but are just different enough to keep dragging us back in.

It’s the reason I put off purchasing this latest version of my favourite of Link’s adventures until now – as a child, I played this to death on my (still working) black and white Game Boy. It was my first experience with a game that, at the time, felt like a huge, sprawling adventure. I very clearly remember being eight or so, climbing to the Wind Fish Egg, my final challenge after collecting the seven instruments (the games main aim), after tirelessly battling my way through the island and feeling the absolute ecstasy as I entered that final dungeon. It’s these childish, giddy memories that put me off picking this up for so long – what’s wrong with the ’93 version, and could the Switches offering possibly bring back the awe I felt as a child?

I breathed a sigh of relief when the opening scrawl finished – everything is just the way I remember it. Link still washes up on Toronbo Shores, lost and weaponless. In fact, Kohohit Island feels almost identical throughout the entire adventure, bar a few modern enchantments and the obvious, stunning graphic overhaul.

The shtick is pretty much typical Zelda affair – plenty of dungeon exploring, incredible boss battles and some fantastic puzzles to solve, but Link’s Awakening always felt, and still feels, unique. The island is bristling with a who’s who of Zelda bad guys – piglike Moblins, boulder spewing Octoroks and shield stealing Like Likes. It’s a veritable feast of classic enemies, and learning how to defeat them across the islands unique biomes is tonnes of fun.

The sprawling map offers endless baddies and plenty of exploration. It’s the first iteration of Zelda that allows Link to jump over items and vault walls, a useful but sometimes frustrating ability when you accidentally drop from a ledge you needed to be on. Combat is fluid and feels great, as well as offering a tonne of challenge, especially when discovering the quirks of new enemies as you progress through the world map. But more importantly, unlocking new equipment and weapons is key to success. Some of these can be gathered through the open world, via mini games and shopping with friendly locals, but the vast majority are found in the game’s dungeons. 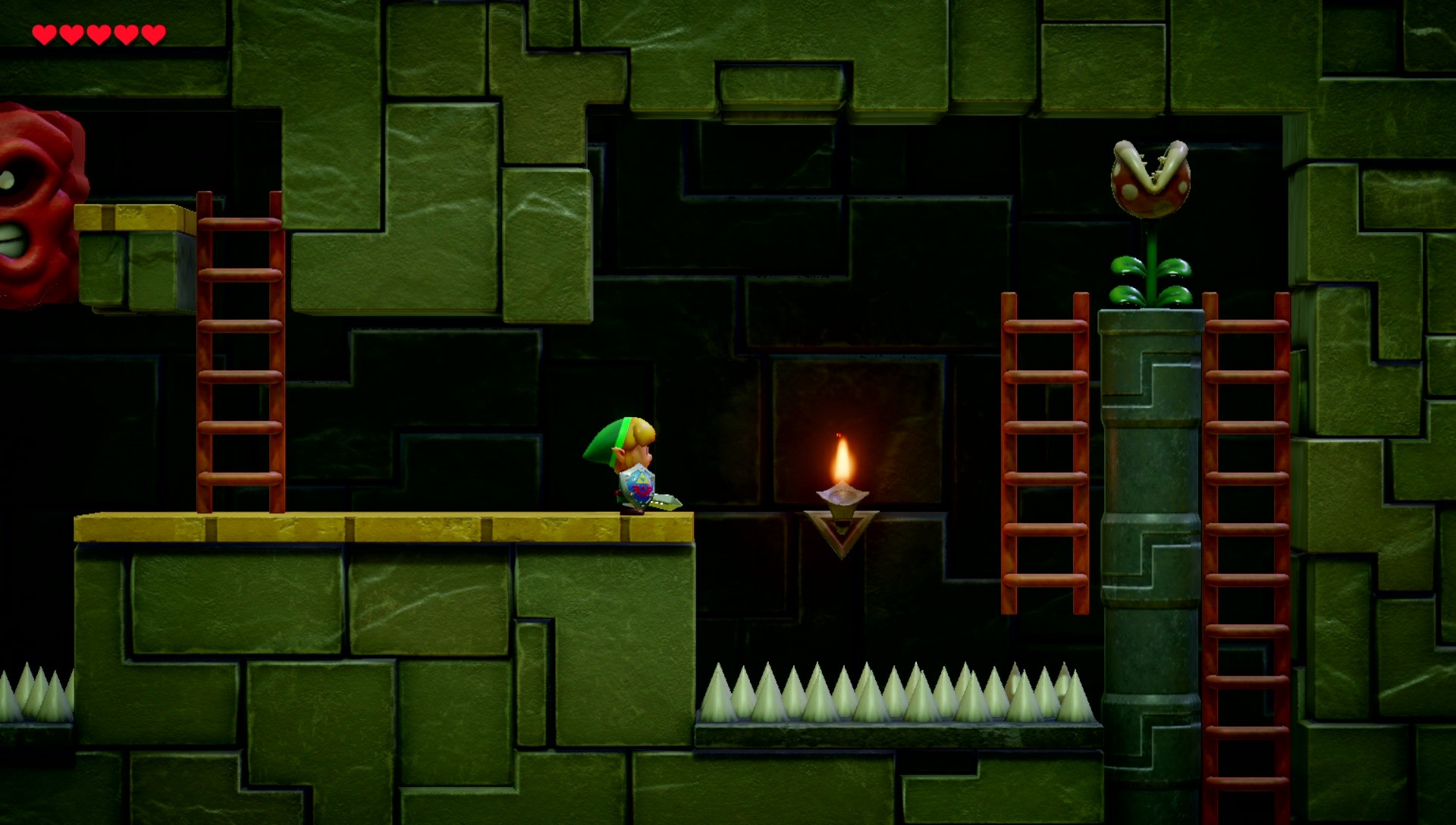 The combination of puzzle, platform and combat elements to successfully complete each dungeon is perfectly balanced, but it’s a combination of all three that makes each dungeon really special. For example, fighting through Catfish Maw, a damp cave, is fantastic with a sword in tow, but you’ll need to locate the Hookshot to make it across its cavernous depths. Lucky for you, Link’s Awakening slowly allows you to build up your gear, so you’re never left in a situation where you can’t make progress.

Back in Catfish Maw, not only does Link need to use his Hookshot to access new areas, but he needs it to defeat the boss too. Grabbing the Slime Eel with the Hookshot to expose weak points allows Link to deal damage. It’s why I think I love this game so much – every piece of gear feels valuable, you don’t just unlock something and don’t feel the need to use it ever again.

Weapons and tools are not only useful in combat situations, but they allow you to gain further access to locations across the map. For example, it’s incredibly satisfying to finally find the Flippers, allowing you to swim through water to access new areas and those places you’ve been dying to reach for ages. There’s also plenty of items that are absolutely no use to you, but might be to someone else. The Island is full of quirky locals looking to make trades, and who knows what you’ll get for your loot?

Outside of the main quest, Link can indulge in a simple but addictive fishing mini game, as well as the return of the crane game. Unfortunately, for returning players they’ve overhauled the latter (a claw grabber from an arcade, if you’re confused) and it plays absolutely horribly, with ‘realistic’ controls that swing loosely as you try and grab prizes, making it difficult to win.

The only brand new additions to the Switch version of the title are the Chamber Dungeon, a light version of Mario Maker, where you can slide pieces of existing dungeons together to create your own mini challenges and Amiibo functions. Chamber Dungeon is a great idea, just hugely underutilised – you can’t properly share them as there’s no online functionality, and as you can’t do much with the rooms, the mode itself grows old incredibly fast. It’s a shame as properly developed it could add potentially endless hours to the ten or so adventure, but in its current state it doesn’t do much to warrant attention. Amiibo support is basic, placing the handful of Zelda themed plastic toys on the Switch gives you a small reward, but it’s not worth digging them out the loft if you’ve got yours stuffed away. 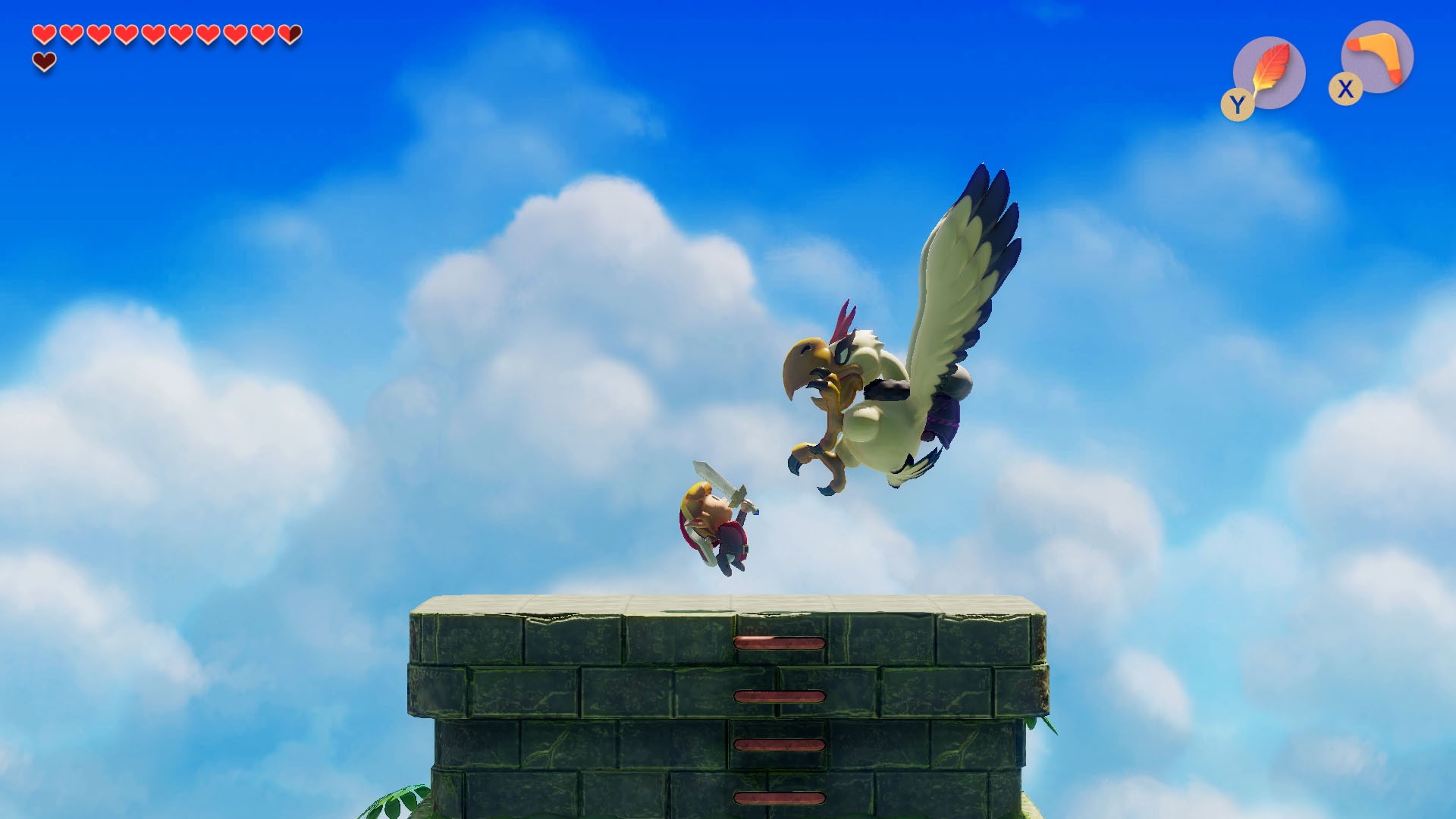 The biggest shift though is clearly, the games design; it’s simply stunning. It’s a ground up remake in the truest sense, absolutely everything has been redesigned in the gorgeous, cartoon style. Everything from Link’s chubby cheeks to the twee monsters are charming and suit this top-down Zelda perfectly. The colour pallette too is bright and sumptuous – every blade of billowing green grass, every cool blue wave is a genuine pleasure to explore, to swim through, to get lost in. To put it simply, it’s the prettiest game I’ve ever played.

Begrudgingly, it handles much better than it did over twenty years ago, playing splendidly on the Switch. The framerate can be a little choppy, which is a small price to pay for one of the best Zeldas and, frankly, best Nintendo experiences of all time. A small but useful change they’ve made is always equipping your sword and shield, meaning you have more room to equip other items and weapons. It was probably my only bugbear with the original title – swapping out your sword constantly was absolutely frustrating.

For a game over 20 years old, it somehow feels brand new. Breath of the Wild might be the Switches adventure stalwart, but Link’s Awakening will always trump it in every way for me. Stunning and gloriously satisfying, it’s held up perfectly.

For a game over 20 years old, it somehow feels brand new. Breath of the Wild might be the Switches adventure stalwart, but Link’s Awakening will always trump it in every way for me.