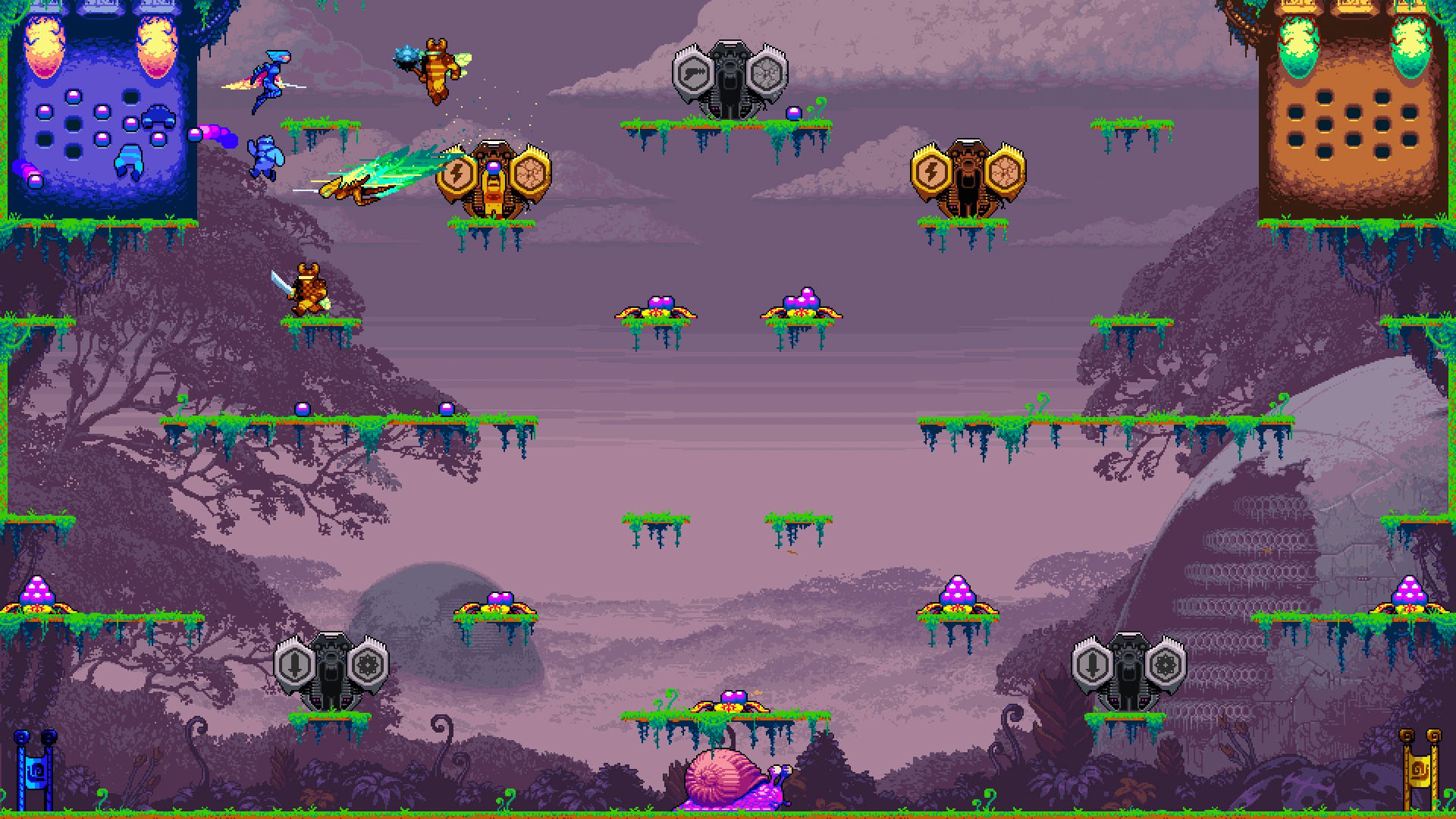 Killer Queen Black is one of those titles that I got excited about being on the Switch before I even fully knew what it was. When the game was announced quite a while ago, I saw the hum online of people eagerly anticipating the release, and I jumped onboard the hype train. After all, some of the things sounded very promising: competitive, arcade-style action, availability of team talking, and, best of all, four platform crossplay. That last part is especially important given that the game is never, ever a solo endeavor: it’s teams or nothing. The caveat, naturally, being that Switch comes first, and the other consoles coming a bit later. Now that the Queen has finally arrived on the Switch, was it worth the wait? It’s hard to say, but I’m leaning towards yes.

For those unaware, Killer Queen Black is a four on four competitive arcade game that pits two rival hives against each other in a best of five series. The teams have three worker drones and one queen, who has significantly different powers than the workers. Though you can customize how the game plays out, there are three definitive ways to win: an economic win (where your drones collect their target berry count before the other team), a military win (kill the rival queen three times), or a snail victory (ride the comically slow snail across the screen to your gate). Naturally, your competitors will be trying to do the same, so you gotta make sure you run interference as best as possible while trying to get your own goals accomplished. And, as best of five (for a regular match), you’ll be able to finish fast if you can get that sweet 1-2-3 in record time. 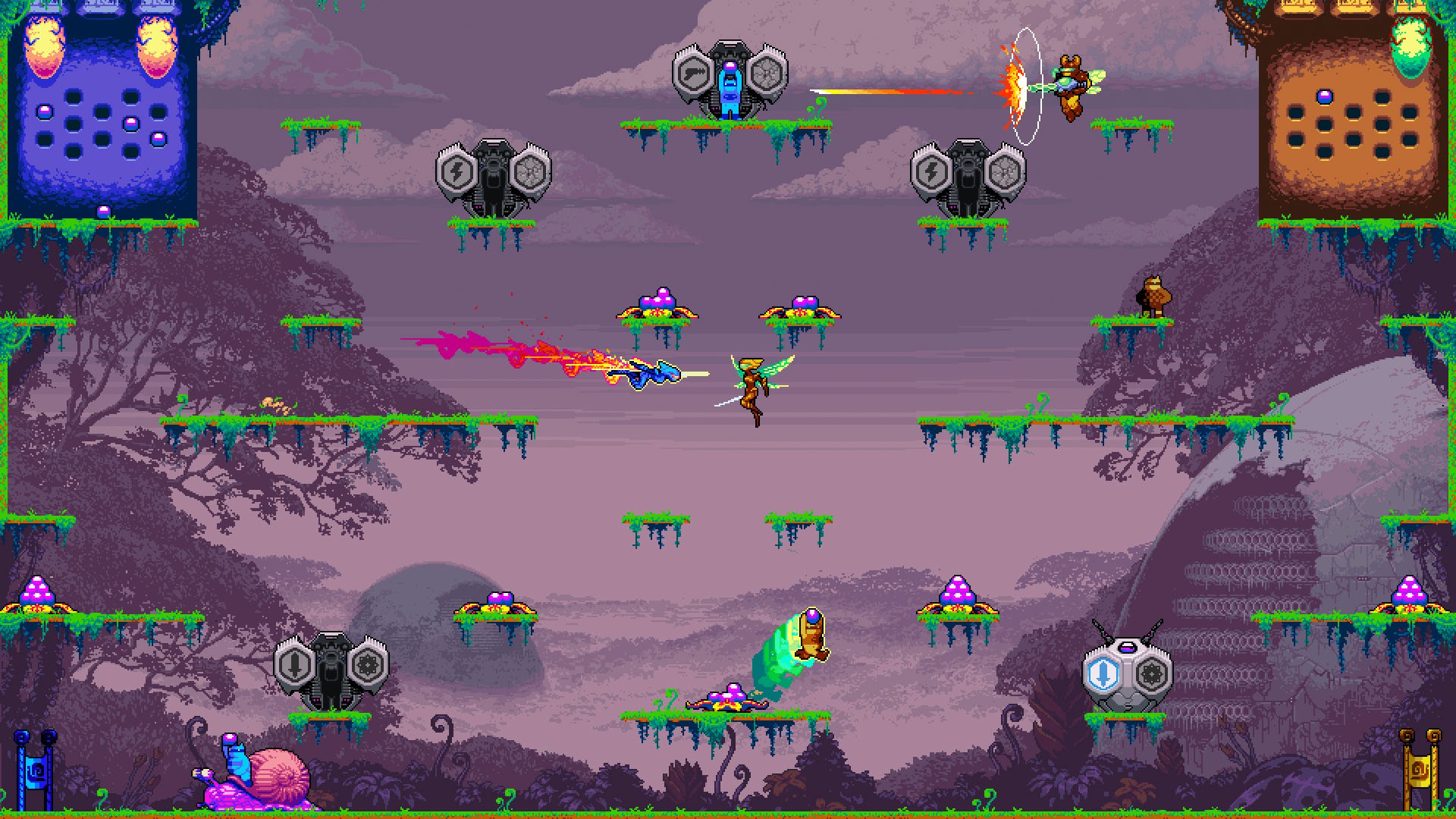 It’s recommended that you use the Spectate function of Killer Queen Black as well as the tutorial to really figure out everything that you can and cannot do within the game. On the one hand, the tutorial covers a lot of the basics, like running and jumping, collecting items, “evolving” your workers into different classes through gates (queens can claim gates that allow workers to go on the offensive or defensive), and the technical movesets of the queen. After all, as the queen who can operate differently and has more to lose with gambling her life, your position within the game is both powerful and critical, given more room for attack and flight but also having your death be a victory condition for the other team. Once the tutorial (which isn’t terrifically long) gives you an idea of how to basically understand the game, you can watch some of the other players go head-to-head, exercising fantastic timing, teamwork and precision to draw every match to the very brink of disaster before recovering and making the last clutch to claim victory. Also, to give you an idea of who is out there currently, and what your future teammates may look like.

Like many of these games, Killer Queen Black is based off of three important tennants: display, gameplay, and matchmaking. The first is a whopping success, and I really enjoyed the way that Killer Queen Black appealed to my visual and aural senses. As you may have guessed, the game is painted with a certain brush of metal musicology, with heavy guitar riffs and some driving, ripping chords to punctuate the beginning and ends of matches, and plenty of drumwork inbetween. The game is havoc and a race against the clock, and the decision by Bumblebear to give the game more of an edge in presentation makes for more excitement. Additionally, I like that the sprite design is very similar to the original Killer Queen (the arcade game that inspired it all), but still more robust in color and variants to separate itself from the ancestor.  By having it be a bit rougher with pixel models, we get this gritty, angry vibe to it all, so the queen really does seem like a ruthless, regal matriarch, and the workers go from bumbling simpletons to these machinations of destruction and military when the queen allows for them to evolve.

As for the gameplay, the concept of Killer Queen Black is solid, allowing for players to really flex their versatility to be invaluable on teams. Being the queen is a wholly different experience to being a worker, and requires more thought and a totally different approach to the gameplay arena. Sure, you’re more powerful, and you’re able to move around the screen more freely, but you’re also necessary for survival: someone takes you out, the whole team suffers. It’s a give and take, as you need to be the one who protects your workers and keeps the team off the damn snail, but you also need to watch your own back: at least twice I saw a queen lose a military victory to a strong, coordinated attack by workers while their queen hid in the corner. But at least the queen knows her one position: the workers and their ability to change really calls into question the communication skills needed for gameplay. Sure, within a quick match, you can just gaff around and do whatever, and sometimes it’ll work out well. When the other team got an economic victory because my workers were too busy trying to push the snail forward while being systematically picked off by the queen, I just shrugged it off because, hey, it’s a game. However, when you start looking at ranked matches and the very real chance that Killer Queen Black’s bid for eSports could lead to competitions, the losses from simple mistakes become dire, so I’m glad that there is team speak options. However, and I can’t stress this enough, the Switch itself DOES NOT have a mic. If you want to share strategic input with the other bees, you need a peripheral, either a headset or just a one dollar mic jammed into the headphone jack.  Don’t just yell at your JoyCon: you’ll all die and you’ll look like an idiot. 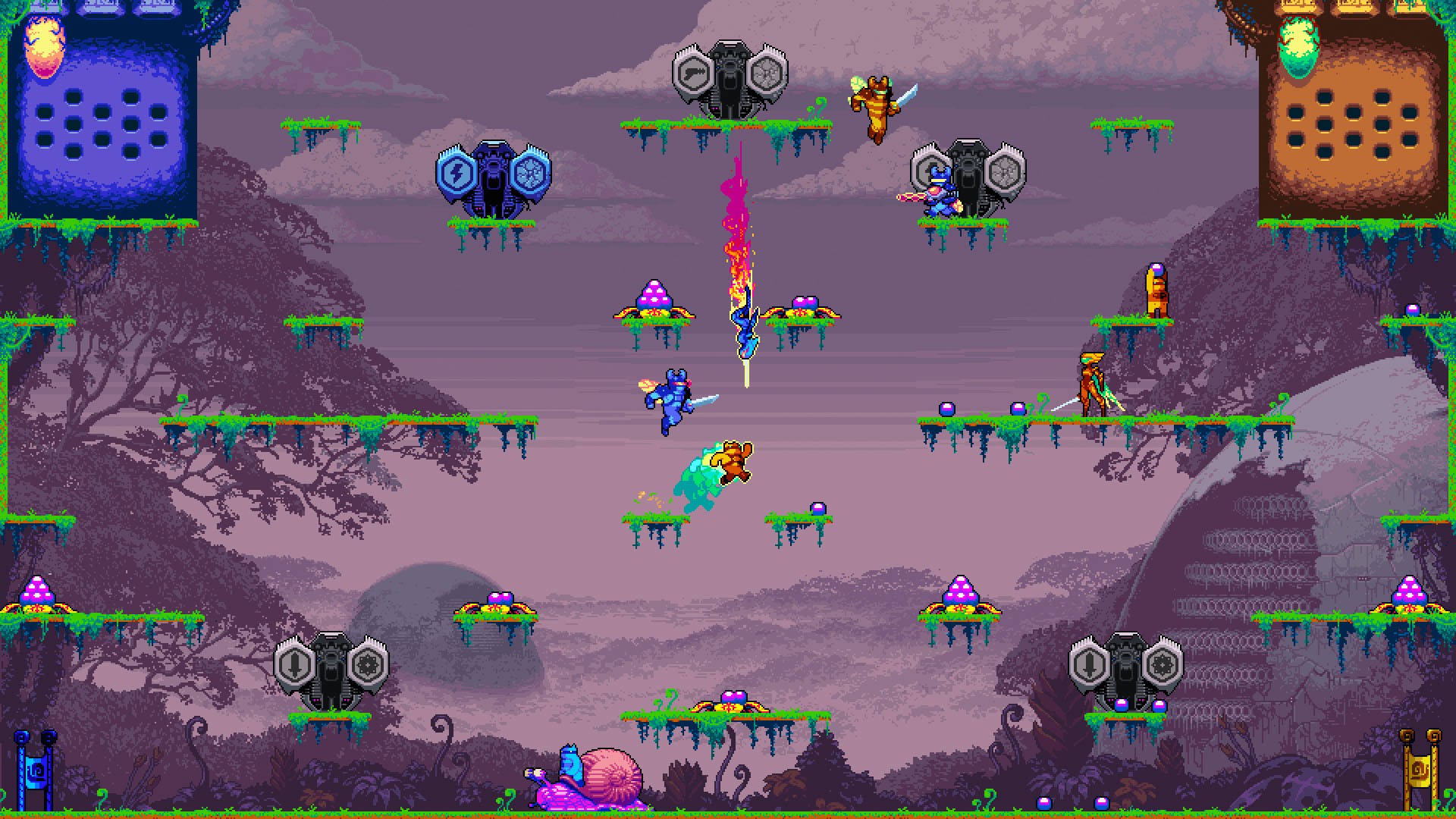 Matchmaking, unfortunately, is where the game is currently faltering, but I’ve got my fingers crossed that Killer Queen Black will attract more and more players both as the cross play rolls out and as word spreads that the Switch release is finally live. I was very lucky with my first Quick Match: I was able to get into the game in a little over 30 seconds and was off and running in no time flat. In my mind, only needing eight people (four per team) is significantly more realistic than the 16 needed for Splatoon. However, Killer Queen Black doesn’t have the draw just yet, and the times got worse and worse. Close to three minutes for my second quick match. I tried to do a ranked match and ended up walking away after five minutes because I needed to make breakfast for my kids. Better success later on, but players need to temper expectations and realize that, unless you’re doing a local match, you’re going to be on the hook for a while waiting for other players to jump into the fray. Once they get there, a game can be over pretty fast (average full quick match was about seven minutes), and so you may want to keep rematching to ensure that you have a player base ready as long as you’re interested. Sure, you can practice against bots, and this is great for when you’re offline and want to see how you do under different circumstances and with different sports. However, the feeling can be hollow, and playing against other people, even if they’re not in the same room as you, is somehow infinitely more rewarding. It’s a great little game, and I’m hoping for expanding success to pick up before the game goes dark prior to the XBox launch.

All in all, Killer Queen Black is damn addictive, a great showcase of split second strategizing, and some pretty funky action and mechanics portrayed by unlikely protagonists. It’s built to draw in the eSports crowd, so RPG enthusiasts and solo adventurers may find the overall package lacking in key areas. But, for those looking for a new path to blaze and potentially become the undisputed Head of the Hive, Killer Queen Black is a fantastic experience, dynamite with a laser beam, guaranteed to blow your mind (or at least keep you fully entertained).

Grab three fellow drones and dive into the fast paced world of Killer Queen Black, where the quick and the smart rule the colony.