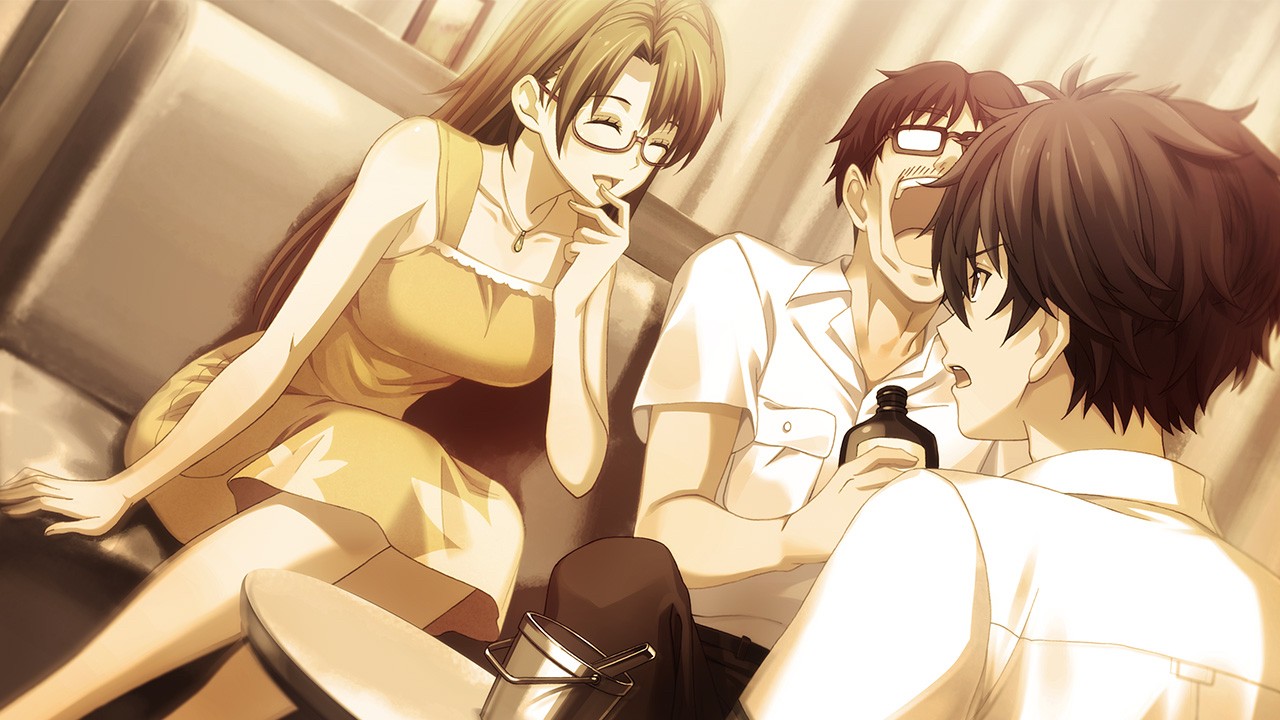 To appreciate what we have now, we must honor and respect those who came before us. People might laugh at the sharp and awkward angles of games from the Playstation era, but those blocky polygons were cutting edge at the time and helped pave the way to the gorgeous and life-like models we see in games today. Mario has had a chance to jump across galaxies and worlds in beautiful detail, but that’s only because he was a stack of pixels with eight colors to choose from once upon a time. Gaming today is a varied, complex and exciting environment built upon the trials and errors of the past, same as any other hobby and profession. However, it’s important to know that we can appreciate and recognize the greats without needing to deify them in today’s realm. Visual novels, believe it or not, have evolved quite a bit, giving way to a lot of variants of gameplay (harems, kinetic novels, etc.) and we have years of creation and experimentation to thank for that. One such title is YU-NO: A Girl Who Chants Love at the Bound of this World, originally created by ELF Corporation, and, now, remade by 5pb, Mages and Spike Chunsoft. However, in remaking a classic title, there are some elements that are left behind, some picked up, and the whole package coming together in a way that appeals to hardcore visual novel fans and, honestly, not many other people.

Takuya Arima is getting ready to graduate high school, and has disconnected significantly from the world around him. His mother died when he was very young, and he lost his father just a few weeks ago in a freak archaeological accident. Not that it mattered: Takuya has had a strained relationship with Mr. Arima for years. Looking forward to a future that seems pointless and masking it all with a facade of perversion and sarcasm, Takuya is caught totally unprepared for the package that arrives at his home one fateful day. Inside is a mirror, a bizarre bracelet of some kind, and a letter from his father filled with science ramblings, confusing confessions and one blazing statement: Mr. Arima is still alive. Wrapped up in mysteries and fiction fused with fact, Takuya must travel between variants of his own world in order to try and find his father, discover the truth of what mysterious research was being done, and, perhaps, save the fate of not only one world, but perhaps a nearly infinite number of worlds.

To save myself keystrokes, I’ll be shorthanding the game to simply YU-NO, though it should be noted that the original title puts YU-NO as the final word and not the first. This is both to help accentuate the beautiful full name of the game, but also to showcase that, while Yu-No (who is a very real, very important character) is pivotal, she isn’t the most important person in the game: you, Takuya are. Takuya is embarking on a mission of a lifetime, one that presents as a visual novel but quickly loses that moniker after the prologue finishes. In actuality, YU-NO is like a first person adventure/exploration game that requires a massive amount of patience, problem solving and critical/non-critical thinking. The package that you receive from your father contains a device called A.D.M.S., a powerful artifact that lets Takuya move between parallel worlds, each slightly different than the last, as well as a small fluctuation in time. With the A.D.M.S., Takuya is able to see where and when certain events create a branching reality, and he can then return to those moments and see down a different path and how that might change things. The A.D.M.S. uses a series of jewels to help create and manipulate these points, and, through the course of the game, you’re able to obtain more jewels in order to carve out a journey that can lead to the best ending of all. As you may have guessed, there is also a whole romantic undertone that drives the game forward from a different “perspective,” but that can be attributed to this game being a product of its time as well as knowing what keeps the game cohesive: if there wasn’t a small cavalcade of women who were into this weird high school jerk, then no one would believe the game could be real. 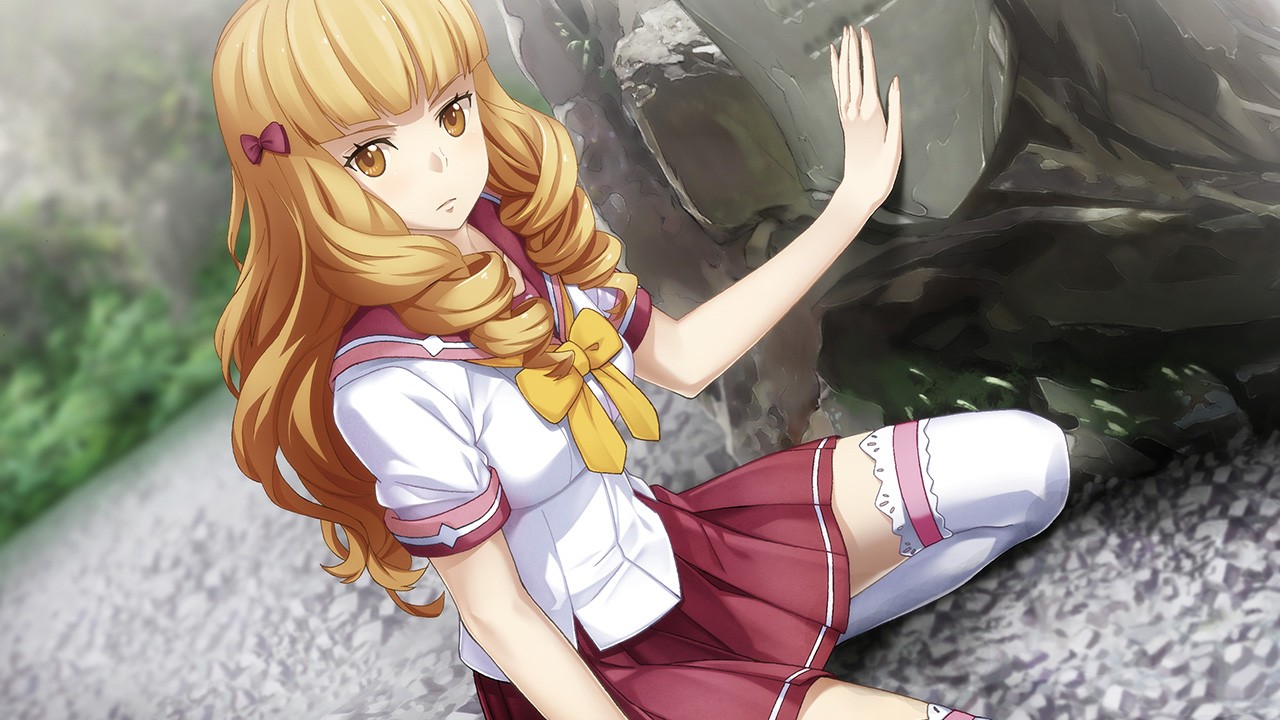 There are several great things about YU-NO that make this is a compelling and enticing game, and a lot of it has to do with the visuals and audio of the entire experience. The voice acting to the surprise of no one, is superb, and the “new” soundtrack is quite lovely, using a blend of symphonic and electronic design to make players immersed in this odd, science fiction/fact tale. I know people are stuck on the original version, but why would you play the remake if this would make you upset? And, as much as I love the anime styling of the 90s (see Pantsu Hunter for a great modern take), there was something different and more aged about character design and even background settings when this game was first created. By remaking it into a modern styling, there’s a better sense about what could draw a player deeper into the game that isn’t present in the original version, at least not for newcomers. The level of detail in things like the intricate stone carvings, the expansive nature of Takuya’s home that he shared with Ayumi (his stepmother who is also a relationship route, good luck with that), even the way the A.D.M.S.mapping system is redrawn helps to showcase contemporary techniques in art and creation. The colors pop more in a lively manner than a muted one, and some small choices in hair and wardrobe thrust the game into the 21st century. The sultry teacher and school nurse, Eriko, handles her sexuality and body display in a manner that’s far different than what was considered “risqué” in the 90s, and it works out well here. She and other characters flaunt some of their stronger assets without coming across too sexual, and it plays out for the tone of the game.

By the way, for people who may be put off because of the original tone of this game (the classic version of Yu-No does have sex scenes in the PC release), this feels incredibly tame compared to a lot that the Switch has showcased in the recent months. Sure, we start out with a shot of a baby being clutched to his nude mother, and it’s kind of weird, and yeah, we awaken from our daydream to stare up the teacher’s skirt, but a lot of the mannerisms and perversion seem right in vein with what Japanese designers take as the hyperbolized libido of a teenager. There are moments that can be somewhat uncomfortable and odd, but it’s honestly much lighter than the on-the-nose pacing of Omega Labyrinth Life or even the relentlessness of Peach Ball, and, as an added bonus, there’s a pretty intricate and bizarre plot line here that does take multiple, multiple endings to figure out. 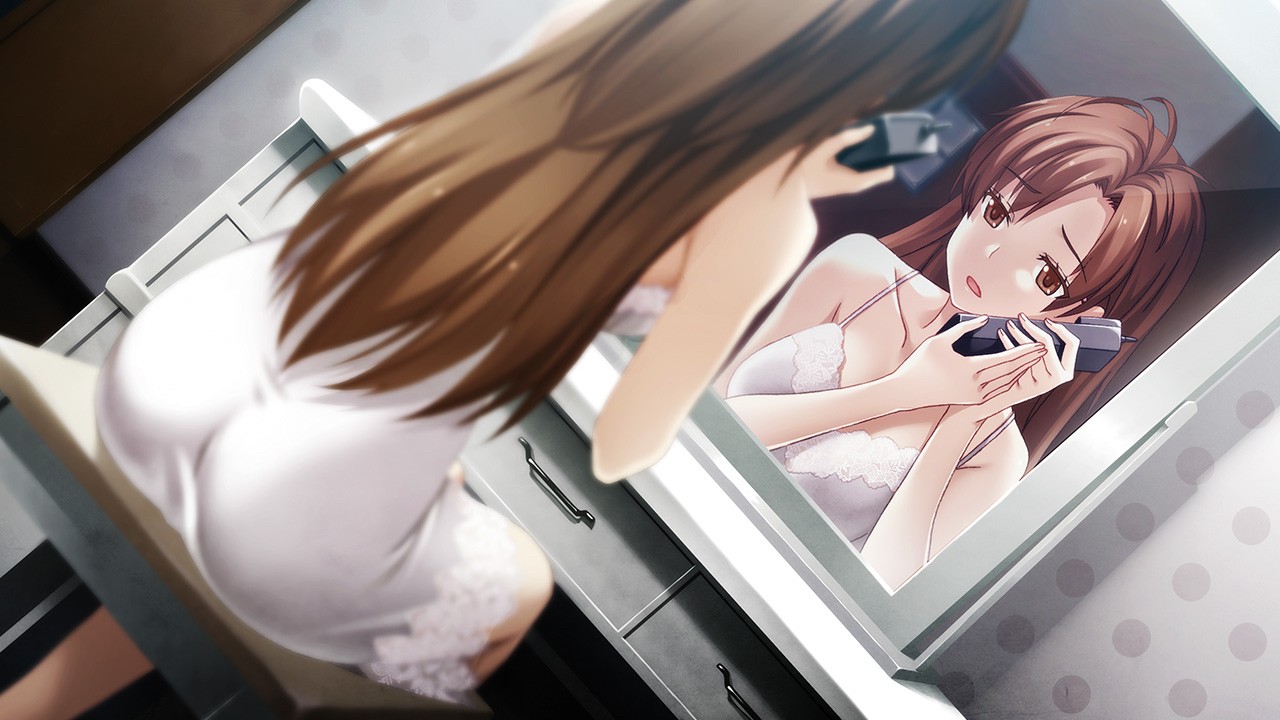 As for the gameplay itself…this is, sadly, where YU-NO really loses me, and I don’t think I’m alone in this. In an effort to break up the game and keep it from getting too blocky, a lot of interactions with characters, items and landscapes require you to click on the same exact thing multiple times, getting a few sentences per interaction. When it grays out, you gotta click on something else, and that might either eventually gray out too OR it’ll refresh the first thing you were clicking on. The game demands that you take a long, long time in each and every room that you encounter, almost pulling teeth to get the full description or conversation from someone. Additionally, not everything even matters to progress the storyline, but it can be fun to break the fourth wall and cause Takuya to yell at you (but why would you have the option to stare at someone’s chest if he didn’t want that as well?). Even when you get comfortable with the massive amount of clicking, though, you still need to deal with the fact that you’re literally jumping between parallel worlds, using jewels and the A.D.M.S. to line up a reality that fits perfectly for someone, and, hint, that’s not an easy thing to do. The reason that this took so long for me to make a review is that I really, honestly wanted to get a single good ending before I put pen to paper, and to prove that I could figure out some kind of logical proceeding to understand how to reach the next destination. Multiple, multiple hours later, I finally broke down to find a guide in order to help me through, and even those are spotty, at best. It’s definitely about the journey, not the destination, but wouldn’t it be nice if the destination was good, too? YU-NO wants you to it all your time and energy into THIS game, to make sure you’re here and figuring out the way to an eternal paradise, and playing other games will distract you too much.

It makes sense from an anthropological standpoint. YU-NO was a gamechanger, a visual novel that didn’t fall into the same tired tropes of harem and dating gameplay, offering players something that was deep and exciting without being horror, and, naturally, it needed to maintain some of the mainstays (dating random chicks) to draw players in. This is something that I view as a piece of gaming history, and I can respect and honor it as such. But, just like I can honor Baroque music without listening to it everyday, I can acknowledge the greatness of this title without needing to truly like it. If you’re a fan of visual novels and want to see one of the more interesting blasts from the past, this modern version is better than people make it out to be, and it’s really fascinating to see how the elements of metaphysics, standard science and grounded mysticism make up the plotline that is far deeper than “I’m mad at my dad.” If you are not a fan, though, this won’t change your mind in any capacity, and you’ll just set yourself up for anger and frustration. Clear your schedule, give a week to the game, and don’t be afraid to hunt for hints if you get too lost. Remember: there’s a parallel you out there, right now, who already beat the game, and, for them, it was marvellous.

A confusing and verbose game, YU-NO still can spellbind the right player, and it’s a fascinating piece that shows how one game can turn a genre on its head.