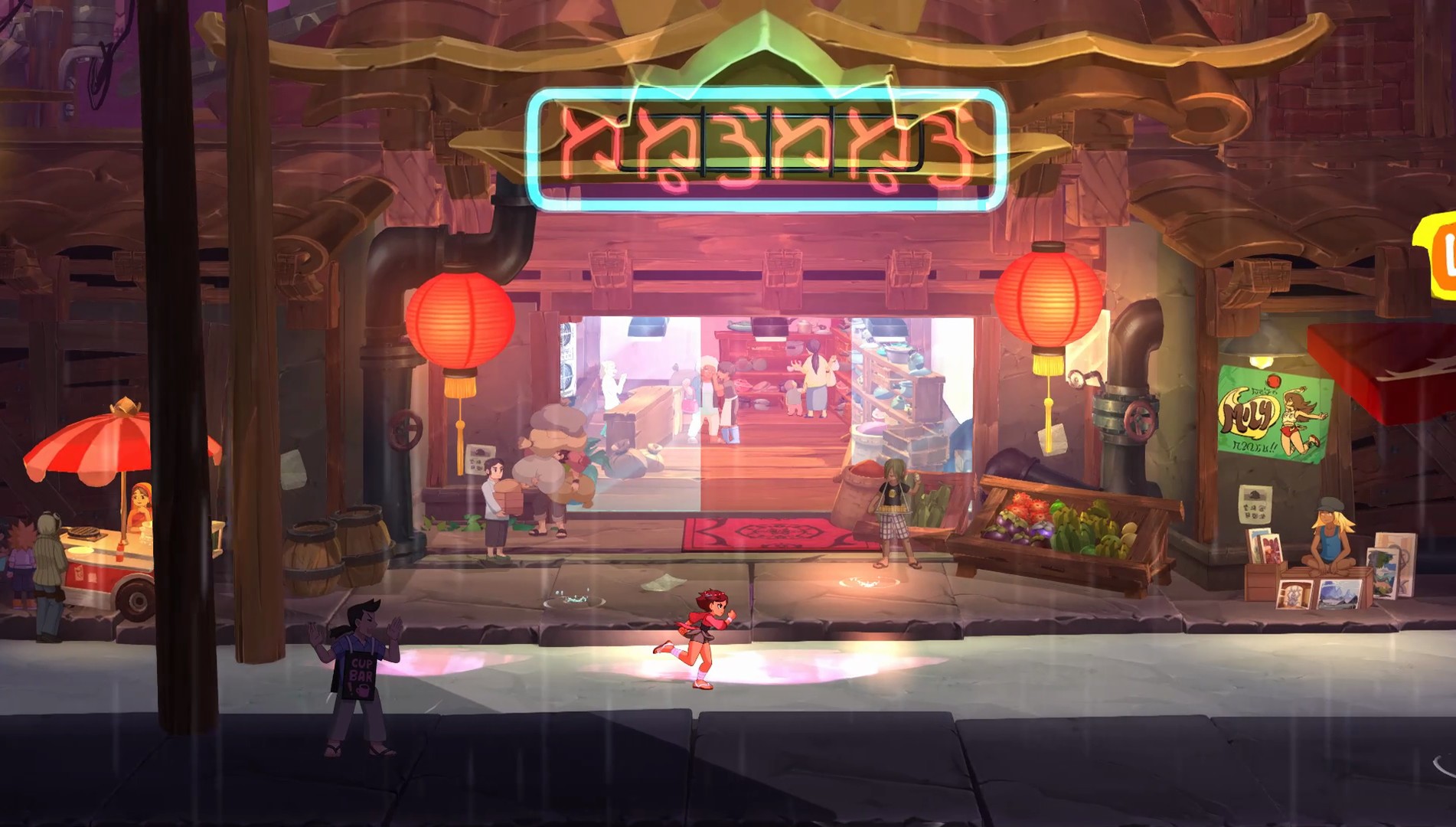 Indivisible’s greatest victory, and there are many, is its undeniable charm. It’s a bountiful wonderland of beautiful environments and sharp gameplay, but what keeps you coming back time and again is its quirky characters and off-beat writing. Around every corner is a new weird enemy to battle, a new character with a unique move-set to learn and an inventive platform section to explore. It’s not perfect, but it oozes so much saccharine-sweetness that it’s hard not to fall in love.

Ajna is a headstrong and rebellious lead, but she’s written with plenty of heart and she becomes instantly likeable, so when her village is attacked by the armies of Ravannavar, you’re drawn into Ajna’s fast moving storyline to enact revenge. Along the way, she quickly picks up strays, many of which have also been affected by the same armies that have decimated her home, all of which are tonally very well penned and with ample backstory to give them a reason to join Ajna on her journey.

But Ajna’s mission becomes so much more than a simple tale of defeating Ravannavar and saving the world. Once a character is met and joins the party, they live in Ajna’s mind (yep), and can be visited at any time, where you can interact with them and get a sense with how they’re feeling. Anja herself is a complex being, on the surface a simple fighter who can handle herself, but soon she discovers she holds a much deeper power.

The roster itself is hugely interesting, from the misery guts Razmi, a tiger skin wearing grump with a biting sense of humour, to Zebei, a bow and arrow wielding soldier with a huge sense of honour. Every character you meet is entertaining, well designed and interesting to try, even if you don’t decide to use them during combat scenarios.

And Ajna’s journey soon throws you into these battles via a clever and engaging turn-based combo system that draws a fine line between quick-paced fighting mechanics and traditional RPG gameplay. 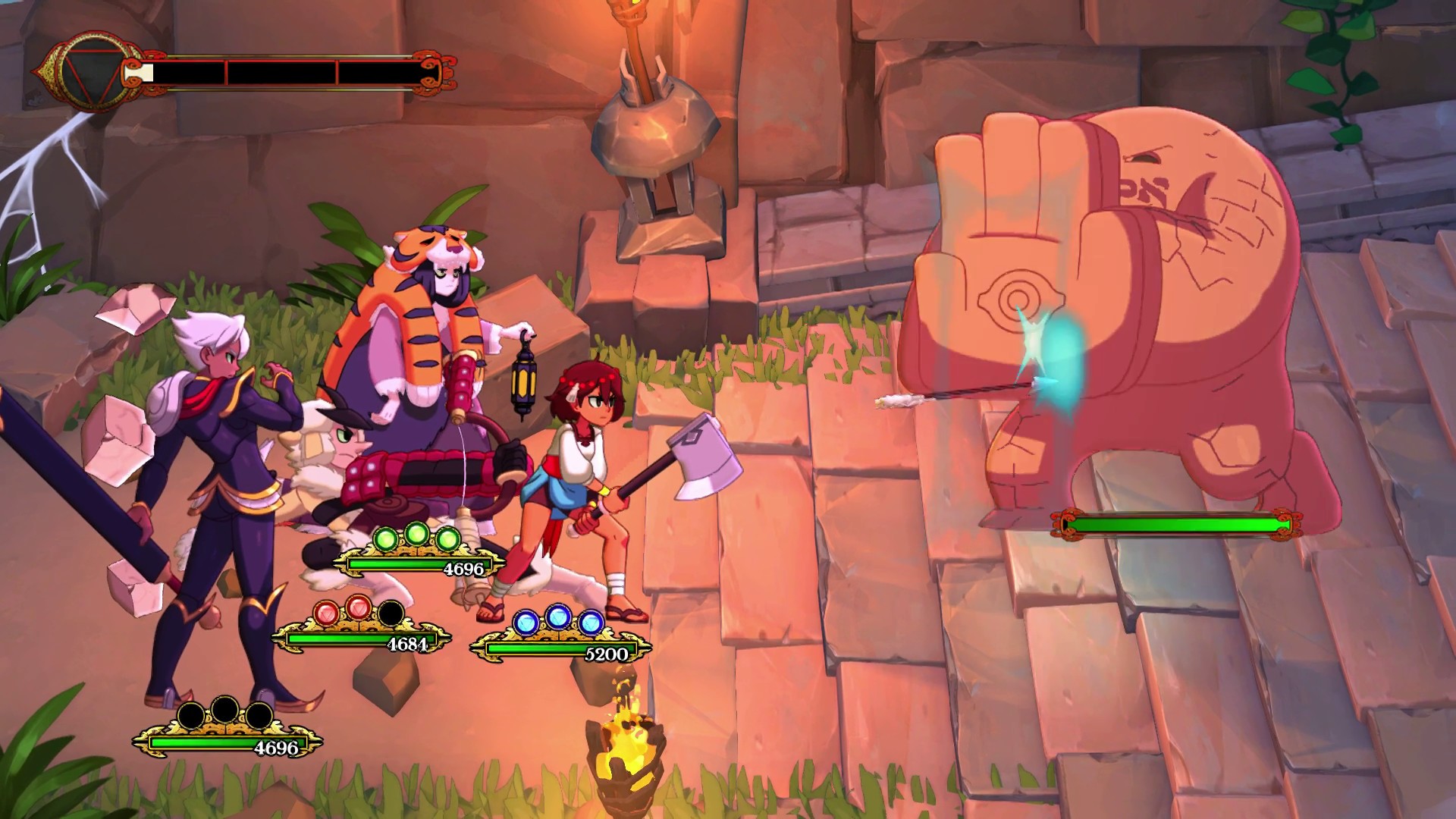 Each character is assigned to a button, progressively developing more successive attacks in a row, allowing you to chain together commands between each of your fighters to make huge, satisfying combos. In-between your attacks, enemies unleash their moves, allowing you to block individually or as a group depending on where the attack is centered on.

Characters also have special moves, like healing powers or buffs for your team. The game really requires you to play around with the huge roster and work out a team that works for you, as with so much choice not every combination will be for everyone.

Once you’ve caused enough damage to an opponent, or successfully blocked enough attacks, you’ll power up your special bar, enabling a character to unleash a special attack. Again, as with each characters special moves, some of these are lousy, but it’s down to what works for you.

Maybe the best aspect of the battle system is the multitude of combinations you can make with the boatload of characters. Sending an enemy flying into the air with one, using another to fill them with arrows and then bringing them back down down with a third is hugely satisfying. 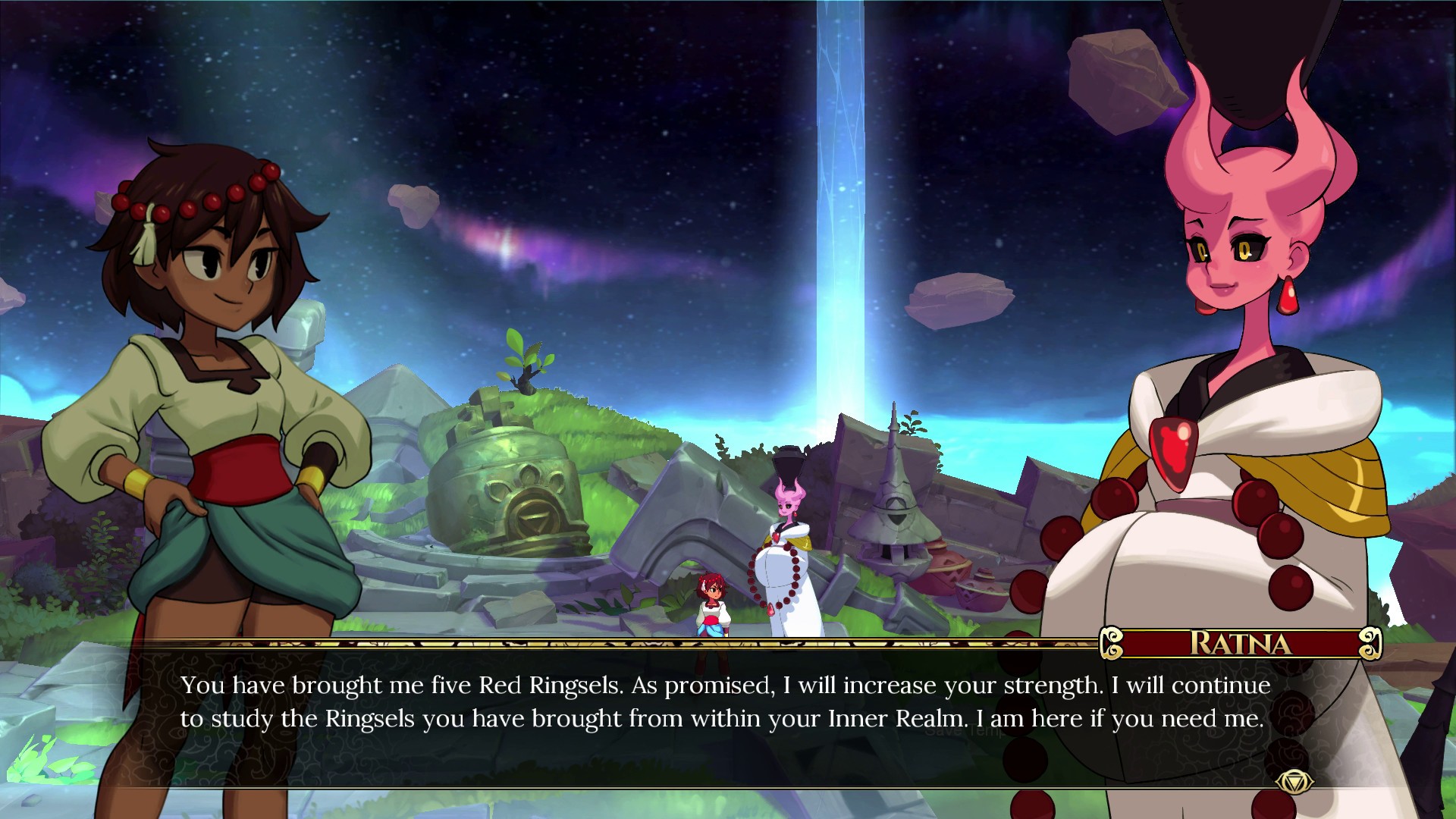 While the combat system is fantastic, the learning curve can be steep, and sometimes it feels you’re doing a little better than you actually are. It’s especially painful to work an enemy down to minimal health, only to have to quickly lock yourself into defence mode because its unleashed an attack at the last minute, spawned two new enemies, sealing your fate. Sadly, that’s the luck of the draw sometimes.

As well as being a fantastic RPG, Indivisible is a great platforming experience, even if it’s not as sharp as titles like Celeste. There’s plenty of wall jumping and bouncing between platforms, but sometimes it’s infuriating to nail landings accurately, relying heavily on luck rather than skill.

As you make progress, Ajna unlocks new equipment to help her through platforming sections, such as an axe and a bow. You can use these to interact with the environment, such as to make platforms appear to get to hard to reach places, but you can also use them on enemies before heading into battle, temporarily disabling them, giving you an instant head start.

Environments are beautiful to explore, with plenty of hidden secrets weaved throughout the maps as well, many of which you need a little bit of logic to find. New characters and upgrades are weaved through the maps, but even if searching through crevices and caves doesn’t yield more than a new enemy to battle, fully exploring each map is completely worth it to soak in every aspect of Indivisible.

Indivisible could easily fall into familiar territory to other RPG titles, but it stands out from the crowd in leaps and bounds. Gorgeously inventive, massively fun and deep, even if sometimes the platforming aspects are a little frustrating. More than anything, it’s so damn charming that I’ll be coming back to Indivisible time and again just to bring a smile to my face with its wonderful cast and great combat system.