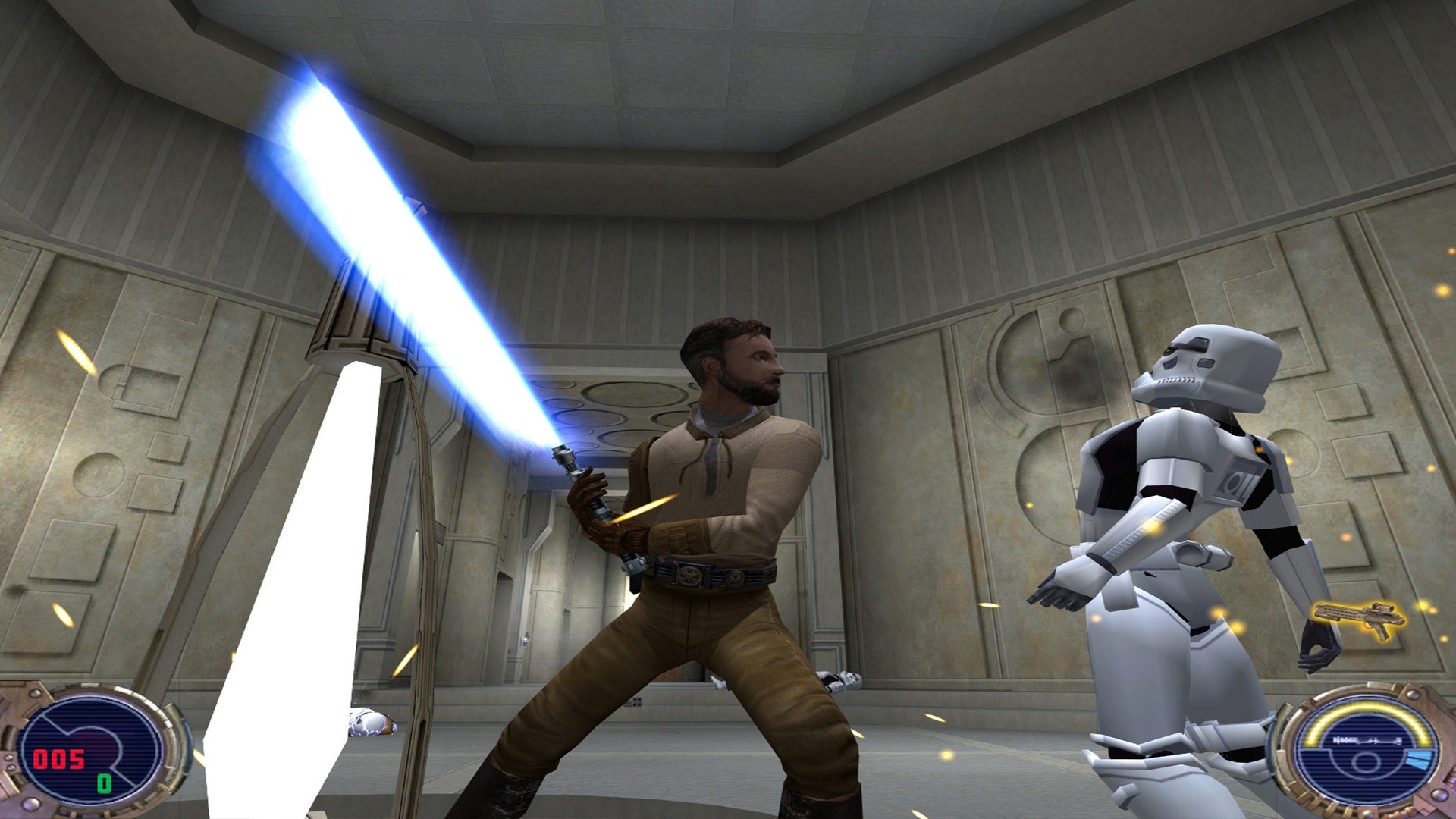 Star Wars, back in the day, in-fact, way back in the day, used to be immensely celebrated. Because, as a franchise, it worked as an object of generational bonding, as everybody from boomers, through gen-x’ers, all the way down to zoomers, could come together and celebrate the high points and the low points of the subject matter; seemingly with no end. But the day Disney purchased the franchise from Lucas and put its own drab and miserable spin on it, in hand with EA, the once celebrated franchise has now become an object of ridicule in the eyes of many.

With films such as The Last Jedi and games such as Battlefront 2, many have turned their backs on Star Wars; whereas others, have decided to turn back the clock and relive the classic films, and most importantly, the games of the yesteryear. In order to capitalize on the nostalgia, Disney has decided to re-release some of the older Star Wars titles on modern consoles, with Star Wars Jedi Knight II: Jedi Outcast being the latest release to hit the digital storefronts.

Star Wars Jedi Knight II: Jedi Outcast is by no means a remake, or even a full-blown remaster, as the title at hand is a re-release with a few modern bells and whistles attached. Yes, the resolution has been upscaled to meet the modern standards, and most importantly modern displays. The control scheme has received the Call of Duty treatment, as the title allows you to walk with the left stick, aim with the right, and use back buttons and triggers from shooting, aiming, and a plethora of other actions. Lastly, Star Wars Jedi Knight II: Jedi Outcast has also received complete trophy support, and while it does retail at just £7.99, it does come with a Platinum Trophy.

Originally, Star Wars Jedi Knight II: Jedi Outcast was released all the way back in 2002 and, while it is a 17 year old game, it doesn’t look that bad. It has certainly aged, but it hasn’t aged as poorly as some games of the period, as the title’s iconic Star Wars art-style, gives the title a hint of modern fervour, which ultimately upscales the experience as a whole – at least in your mind. Animations themselves are also not too bad, as besides the rather simplistic lip-syncing, character animations are rather stellar, and the lightsaber and force acrobatics are a joy to look at. 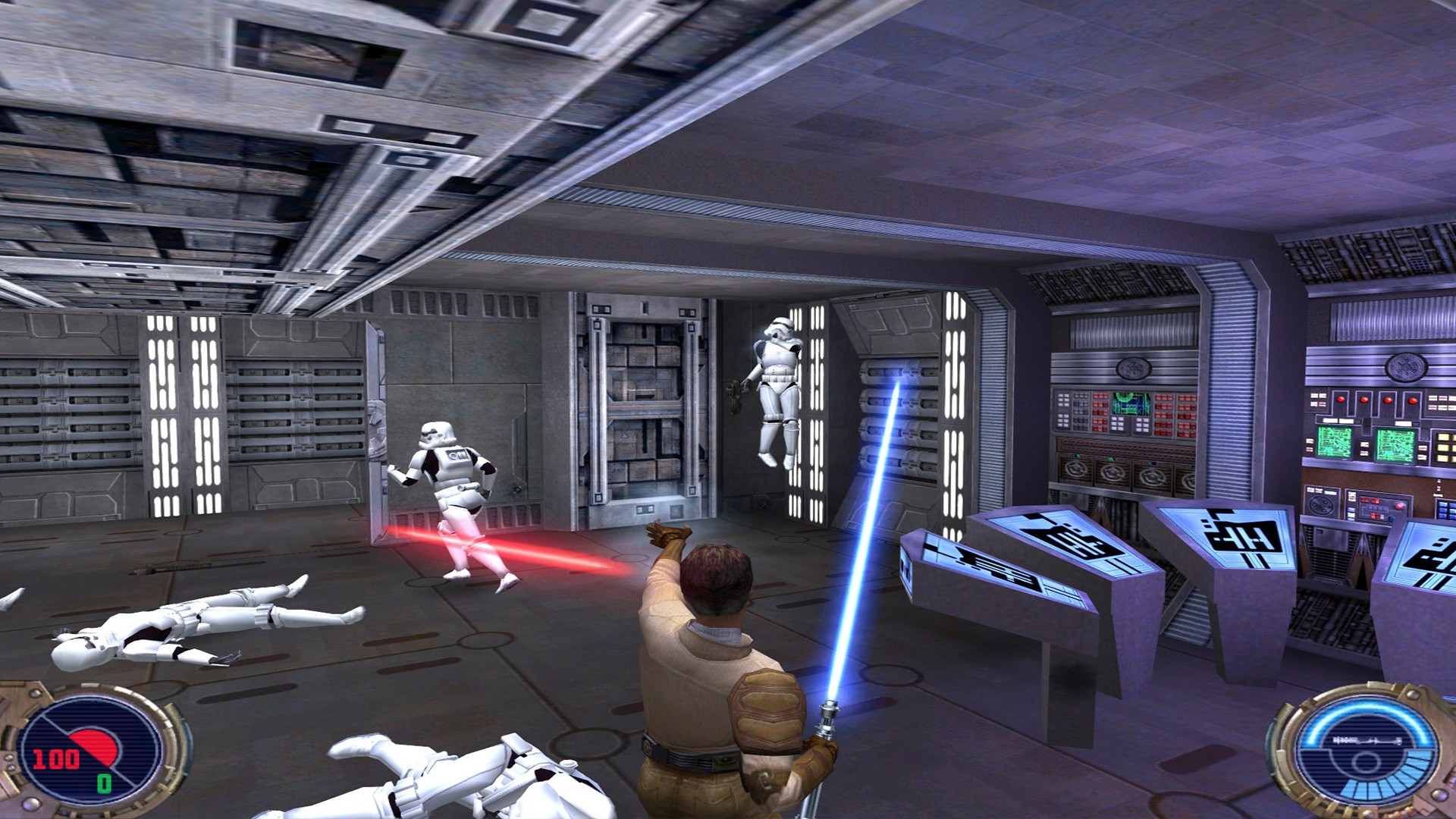 Star Wars Jedi Knight II: Jedi Outcast, unlike more modern Star Wars titles, such as the last generation’s The Force Unleashed, features a plethora of tools, weapons, gadgets and even force abilities and while the title starts with Kyle, the main protagonist, sporting nothing more than a single shot blaster, then soon enough his arsenal will expand with thermal grenades, bowcasters, rifles, and ultimately the lightsaber, complete with Jedi tricks and powers.

Core appeal of Star Wars Jedi Knight II: Jedi Outcast stems from the fact that it is the ultimate Star Wars simulator and even if you remove its rather enjoyable narrative, which even after all those years shouldn’t really be spoiled, it is still one of the best Star Wars games out there. The core gameplay is incredibly fast paced and exciting, as every single encounter, even with the lowliest storm troopers is full of thrilling, adrenaline inducing moments. These moments only grow in stature and significance as you progress along the main plotline, as with time, you will be facing sabre wielding antagonists.

Sabre duels, which have been rather pathetic in Dice’s both Battlefront instalments, are the centrepiece of the 17 year old Star Wars Jedi Knight II: Jedi Outcast. Sure, they do not feature semi-scripted sequences which could elevate it to the next level, and they do lack the visual splendour of Shadow Warrior 2 massacres, but the all the core principles from acrobatics, through tug-of war, are all there. And those are enough, to turn the rather simplistic encounters, into short-lived works of art. 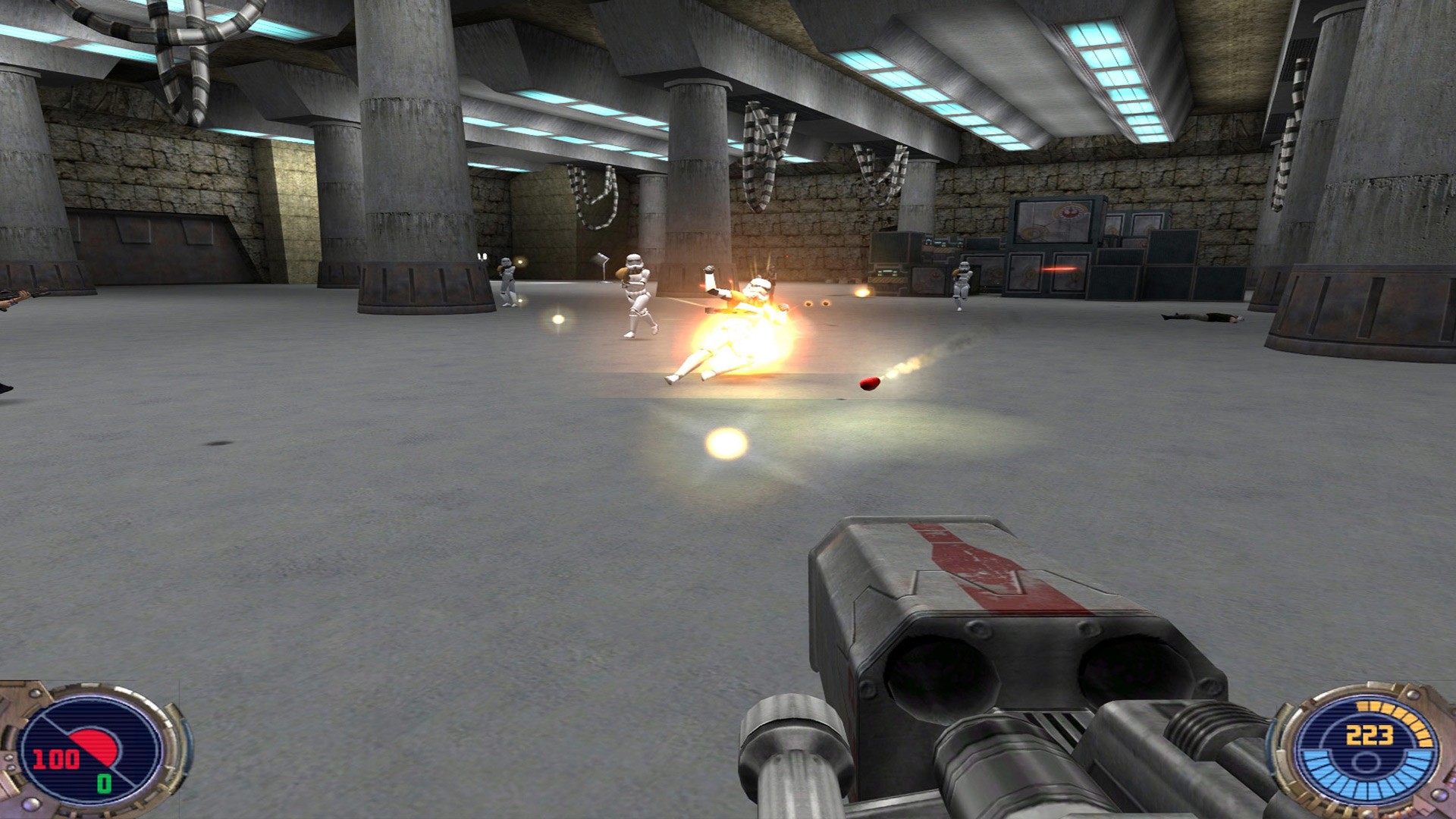 With getting lost, comes another issue, but this one is related to one’s curiosity. Because once you’ll get lost, you will desperately search for that one route to the end objective and as Star Wars Jedi Knight II: Jedi Outcast does, at times, offer rather unorthodox paths to success, you are bound to search for equally, if not more absurd ways to progress. In doing so, you may make that one jump which will land you on a rock in a middle of an endless void – with no way back; or, you may weasel your way into a hole, with no way out.

Dead ends within Star Wars Jedi Knight II: Jedi Outcast, are aplenty and while today those would go down as inexcusable design flaws, then in context, those are rather a product of their time when it comes to this particular title. Sure, they can be immensely infuriating – especially when you are forced to replay half a level – because the last autosave happened 30 minutes back. But most, especially those born before the turn of the century, are likely to excuse those, because they grew-up playing games which were, and still are, much, much worse.

If I could, I would give Star Wars Jedi Knight II: Jedi Outcast two different scores. One, looking at the title using the context of its age, and the other, without such. And while context, especially in this day and age is immensely important, then I can’t use it as an absolute excuse, because ultimately, Star Wars Jedi Knight II: Jedi Outcast has been re-released in 2019, and therefore it should be compared, not to its 2002 counterparts, but to the modern games of the current year. With this taken in consideration, I believe that the score which I’ve given represents the title’s points, strong and weak, in the best possible way.

With 17 years on its back, Star Wars Jedi Knight II: Jedi Outcast has aged rather significantly, but even with all its relics of the past in hand, it still holds up rather gracefully.