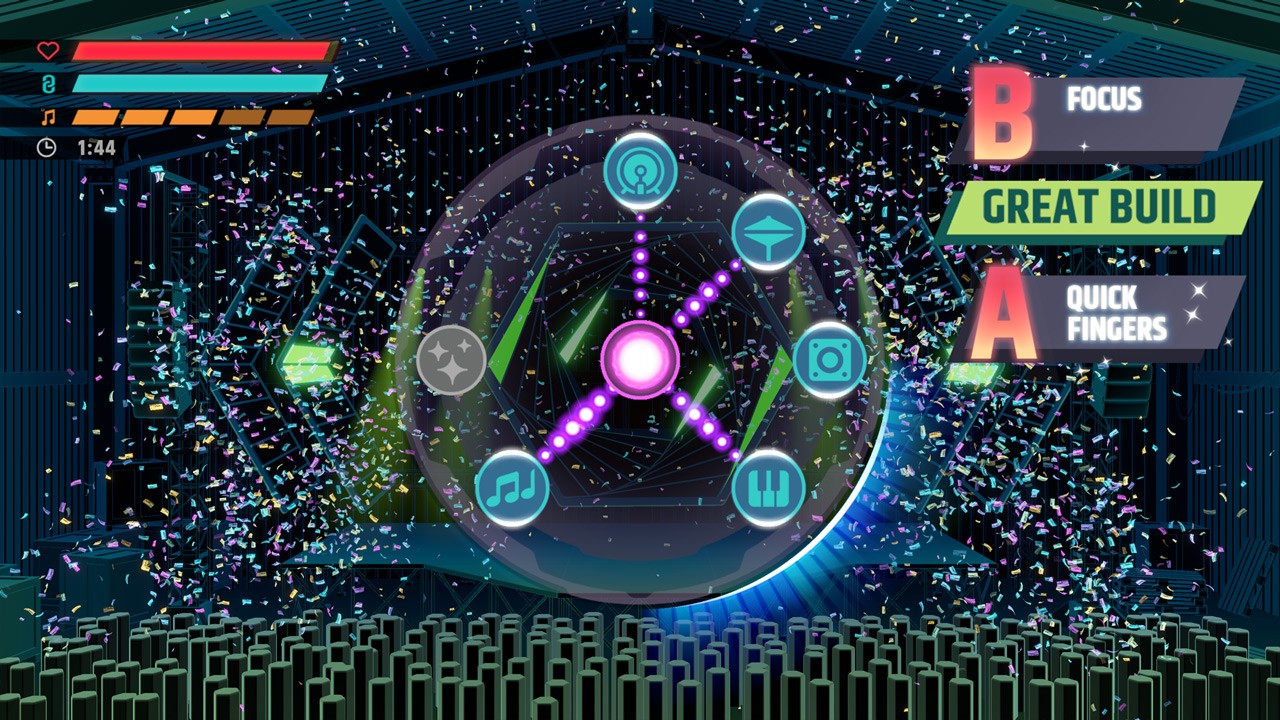 I’ve always been a fan of EDM, or Electronic Dance Music. From the mud-soaked, all night raves within the fields of the late eighties and early nineties where god was a DJ, to the euphoria of trance as it began to hit the mainstream with a series of superstar producers. It’s repetitive, yet ultimately catchy beats always spark a beeline to the dance floor for me and even during the rainy days where I was stuck indoors, I would be piping the tunes of an upbeat Mario track whilst battling Bowser, or in-between games, trying to create my own technotronic tunes on the Commodore Amiga 500. Even though I always had aspirations to try my hand at DJ’ing, I rarely had the time, or the funds, to embark on such a venture. However, all my dreams can now be realised, as Ichigoichie’s Hexagroove: Tactical DJ fills the dance floors on the Nintendo Switch.

Much like being a DJ, the overall objective here is to set the roof on fire with a series of break-beats, hypnotic trances and thumping bass-lines to keep the crowd moving and the dance floor bouncing. Following the game’s campaign mode, you play in a variety of venues, from pool parties to nightclubs and tribal gatherings to festivals; each one requiring a different style in the music that is played, from Techno to Trance and House to Chill-out. Whatever your venue, the crowds, all made up of small bouncing blocks or pillars, gather to dance to the twin-decks of your musical creations. This is achieved by seamlessly dropping beats that the crowd demand and keeping the rhythm flowing in a satisfying mix of musical mayhem.

Instead of a turntable though, you are presented with an hexagonal grid which displays a number of icons around its perimeter. These range from bass-lines, percussion, pianos and melodies. You begin by dropping the beats and as the crowd chant what they want to hear; selecting the required icon and dropping the tunes so that their timing blends perfectly with the current BPM that happens to be spinning. Get your timings right and crowd go euphoric; cheering and firing confetti cannons as you raise the roof of your current venue. To add a variety to the soundtrack, each icon opens up four choices of varying styles to choose from, producing a constant mix of bass-beats and riffs to keep the tune ever evolving. However, this selection can be further boosted with a ‘queue mode’ that sees you playing a series of rhythmic mini-games to produce a series of loops that can be introduced to the current track. 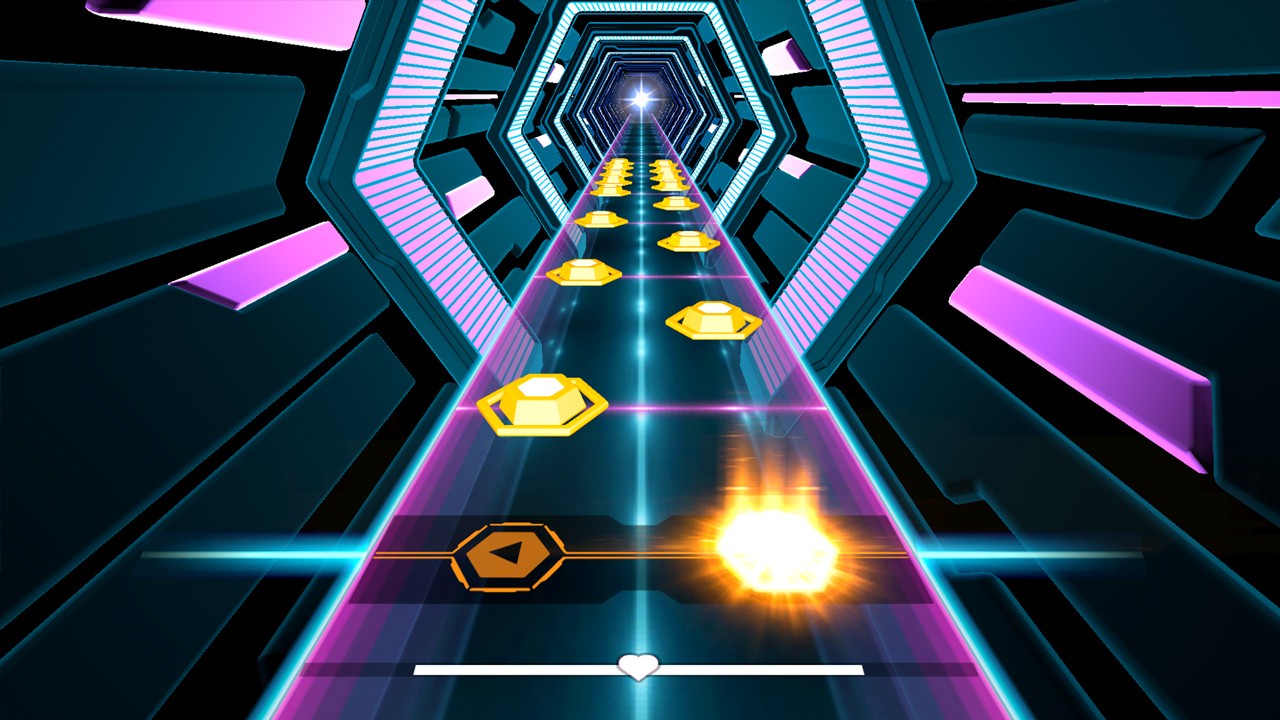 These sections drop at varying points of your set-list. Within a limited time, you must select a number of samples which fills a bar along the top of the screen; the higher the bar, the better the score that can be achieved, but the harder the mini game becomes. There are two varying types of game. One that follows a wavelength of melodies and the other that displays a Guitar Hero style of mechanic that involves pressing buttons at selected intervals. Moving along the wavelength requires you to aim a cone-shaped reticule, with the left analogue stick, that follows a twisting line as it moves along a course. The other mode sees you follow a straight path that contains a number of points on the left and right side of the tracks. Using the left D-pad and the A button, you must press each corresponding left/right button to hit the sweet spot as the notes move towards you.

These sections can make or break your game, with successful traversing producing euphoric moments, whilst failure can result in you bringing the house down and the crowd stopping amongst a series of groans. However, in general, you’re rarely punished for missing a beat or dropping a tune out of synch and working your way through each track is never too difficult. Saying that though, there are other elements that forces you to be wary of everything that is going on on-screen, as well as listening to your track to ensure that all your timings are smooth. Should you be producing a smooth soundtrack, then a ball bounces around the crowd and in order to keep the bounce going, you must press a button in tune to the beat that produces an extra percussion such as a cymbal crash or hand clap. Missing a beat though can easily be corrected, with only your overall score taking an impact from such mistakes.

Each venue, or style of EDM played, is graded depending on your performance. Pass each venue though and you progress to a different style of music and a larger venue to play at. The overall campaign itself is quite short, with only a handful of venues to play at, but replaying them to better your grading does add a touch of longevity to its overall length. You can also choose from an easy or hard difficulty setting, the latter of which introduces more icons for your riffs, melodies and percussion. You can also choose to practice in order to refine your skills, which although optional, are highly recommended if you want to achieve the highest grade for each venue. 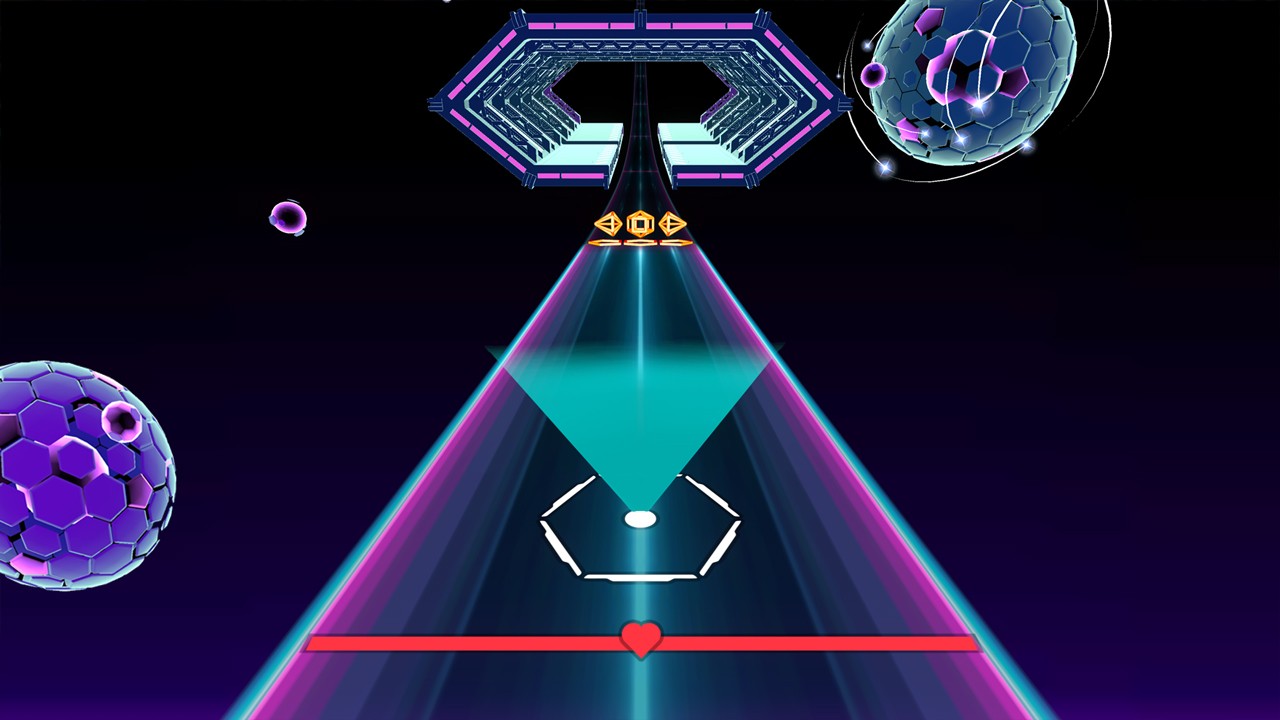 As well as the campaign mode, you can also play a Freestyle mode. There’s no objective here, but simply presents you with the option to play any style of music from a range of over four-hundred and twenty different samples; allowing you to experiment with each sound and produce your own dance tracks. The possibilities here are simply endless and provide a very long-term appeal that never grows old. The game also incorporates a multiplayer mode, the Entourage, for up to four players locally. It’s quite a clever little set-up, allowing you to split duties amongst yourselves with one person producing the loops and beats, whilst another player concentrates on the ball-bouncing percussion and the others take on the mini-games. You can also add superfan abilities with the shoulder buttons to add some extra effects.

As you’d expect, the audio qualities are top-notch here, with a variety of tunes that are all great to listen to; especially if played through a set of headphones or connected to a set of high bass speakers. Each of the samples are easily distinguishable when mixed together, making it sublimely satisfying when you change the beat or drop a particularly heavy bass-line. It’s all complimented by a general presentation that, whilst quite minimal, is effective at making everything clear and serves it purpose well. In fact, watching the crowd of blocks jumping up and down to the beats of your mix is something that I’ll never tire from seeing. Bright neons, exploding confetti and vibrancy are the name of the game here, matching the modernity of its electronic style perfectly.

Overall, Hexagroove: Tactical DJ is one of the most upbeat and toe-tappingly addictive rhythm games ever made; especially if you’re a fan of the genre and electronic dance music. It’s unique, challenging (especially on the harder difficulty settings) but ultimately, a very rewarding experience. Creating your own dance tracks, either in the campaign for the crowd to dance along to or within the endless freestyle mode, provides a pleasing game in its creativity and the ability to play along with your friends adds a nice touch to you all working together to produce the best dance tracks. Although its campaign is relatively short, its other modes provides a lifetime of entertainment and even if played in a solo capacity, within the privacy of your headphones, guarantees that you’ll soon be reliving the rush of the rave or tapping your toes to the bass beats of your own dance music creations. As we used to say during the rave years: Hardcore, you know the score.

Hexagroove: Tactical DJ is one of the most upbeat and toe-tappingly addictive rhythm games ever made; especially if you’re a fan of the genre and electronic dance music.