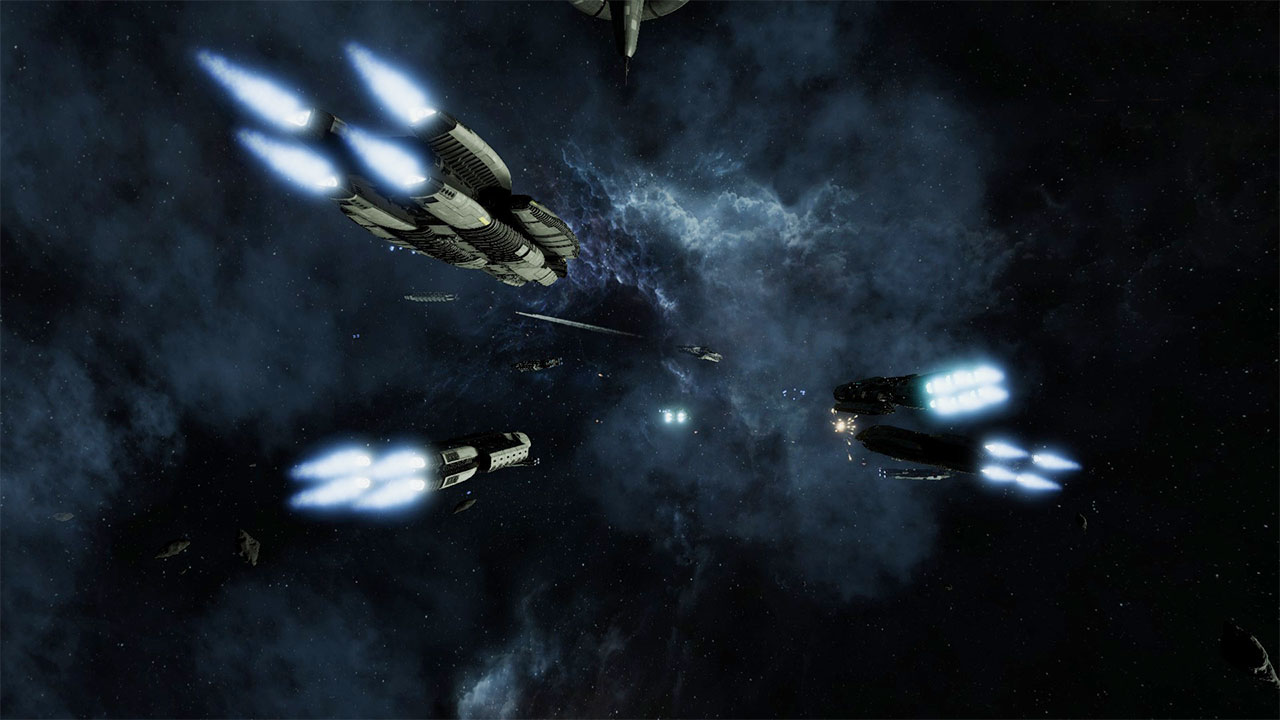 The memories of our youth can hold many things, be it a favourite toy as a child or a particular holiday. Events too, can hold a significance within our memories or regularities within the family circle, such as traditions or a change from the norm. For me, one of those memories involves sitting in the front room on a Saturday evening, with our tea on our laps, usually consisting of fresh prawns and crusty rolls, whilst we all munched along to the television serial, Battlestar Galactica. It was a sort of tradition in our house when I was a young teen, watching all the American shows such as Buck Rogers, The A Team and Airwolf. But my biggest standout point is always the sci-fi sagas of Starbuck, Boomer and that lovable robot dog, Muffit. The series has since seen a more modern makeover, with better special effects, zooming camera angles, a new cast and redesigned ships. Admittedly, it’s not a series I have yet watched, but that didn’t deter me from trying my hand at Battlestar Galactica: Deadlock as it launches its Vipers to release upon the Nintendo Switch.

Developed by Black Lab Games, with publishing through Slitherine Ltd, Battlestar Galactica: Deadlock first released on the PC platform in 2017 and has seen subsequent releases on the PS4 and Xbox One since then. This new release for the Nintendo Switch offers the same experience, only this time around, it’s fully portable and comes with touch-screen support. It plays as a 3D, tactical space combat simulator that works in a turn-based mechanic by selecting Battlestars, Cruisers, Corvettes and Fighter craft, then plotting a trajectory for each unit and issuing a set of commands to flank, evade and dominate the opposing forces of the Cylon fleets.

The story follows the events of the First Cylon War from the updated television series, but like me, if you’ve never seen this serial but are still a fan of the classic Battlestar Galactica, there’s still a huge amount here to fall in love with. Following a surprise attack from the Cylons, the Colonials are left reeling from the destruction of the fleet’s high command on the Planet Picon. With the acquisition of the new Battlestar class of dreadnoughts on the horizon, it’s left up to you, under the guidance of Rear-Admiral Lucinda Cain, to take command of the fleet from the bridge of the mobile shipyards, Daidalos, to quell the threat and onslaught of a new wave of Cylon hostilities. You must build up your fleet to full strength again, protect the Quorum Alliance and free the Twelve Colonies from the Cylon threat. 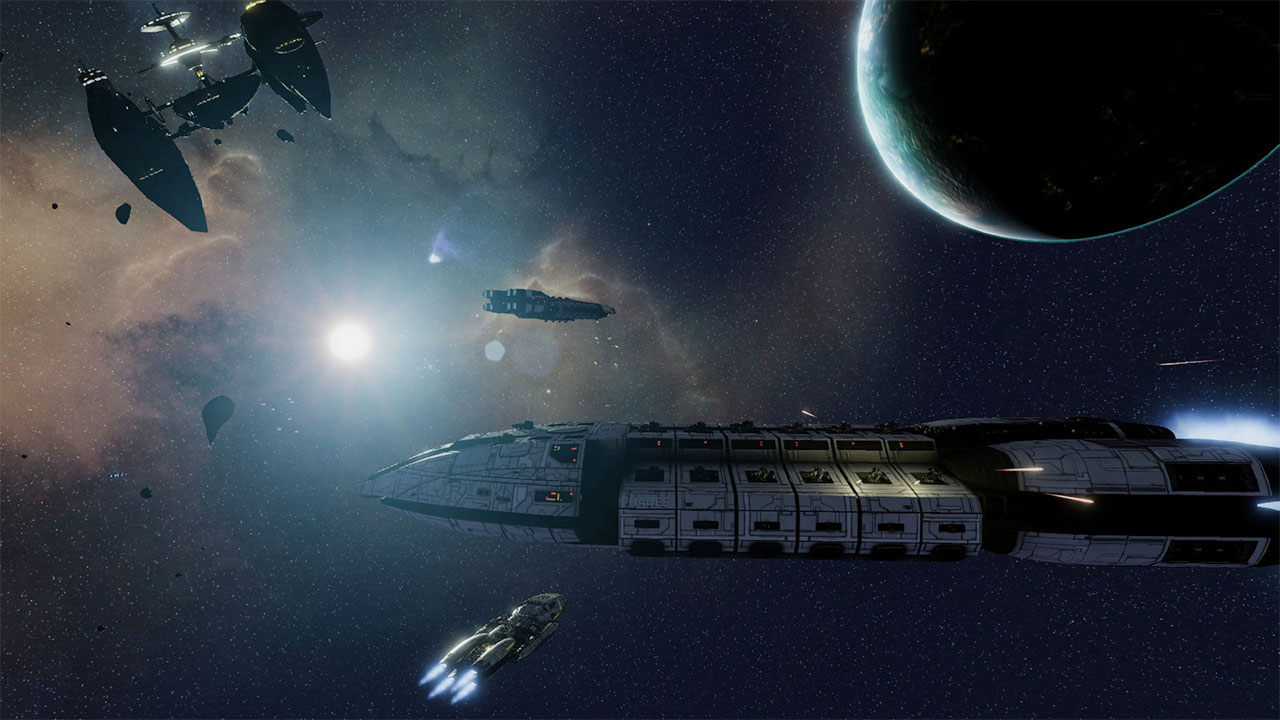 The game follows an episodic style of level, each one revolving around the escalating conflict between the Colonial fleet and the robotic Cylons. From your Command Centre, you design and build a fleet of powerful capitol ships from the Manticore Corvette to the menacing might of the Jupiter Class Battlestars. From here, you are presented with a variety of combat missions that involves you taking complete control of your fleet and determining the trajectory of their flight paths, issue commands such as missile launches, turret bombardments or viper launches to quell any Cylon attack and work towards gaining a stronghold across the galaxy.

It works in a turn-based style of play, with you cycling through each ship that is available to you, drawing a trajectory and issuing ceiling heights, commanding its crew on a style of action, whether offensive, defensive, flanking or support, before watching the action unfold before your eyes through a series of cinematic presentations. Whilst you are issuing commands, the enemy AI is also plotting their next move all while the game remains in a point of stasis. Once all commands have been issued, the battle then plays out in real time, with sweeping camera angles, zooming shots and close-up sequences. It follows a stop-start series of patterns, issuing commands, watching their results play out, before the battle pauses again so that you can observe the battlefield and issue a new set of commands, depending on the state of affairs.

There’s a lot of depth here in terms of tactical gameplay. You need to be mindful of a number of factors, such as enemy movements and deployments, flight paths, so as not to collide into friendly or enemy ships, damage levels and repair functions, as well as Viper or Raptor squadrons and their numbers. Each step-by-step turn requires you to be mindful of every situation, as the enemy AI is relentless in its challenge. From boarding parties that require marine interventions to the EMP hacks of the Wardriver fighters, these provide extra elements that need to be combated against. I can easily say that, within its genre of turn-based, tactical warfare, this game is the most challenging I have played on the Switch. 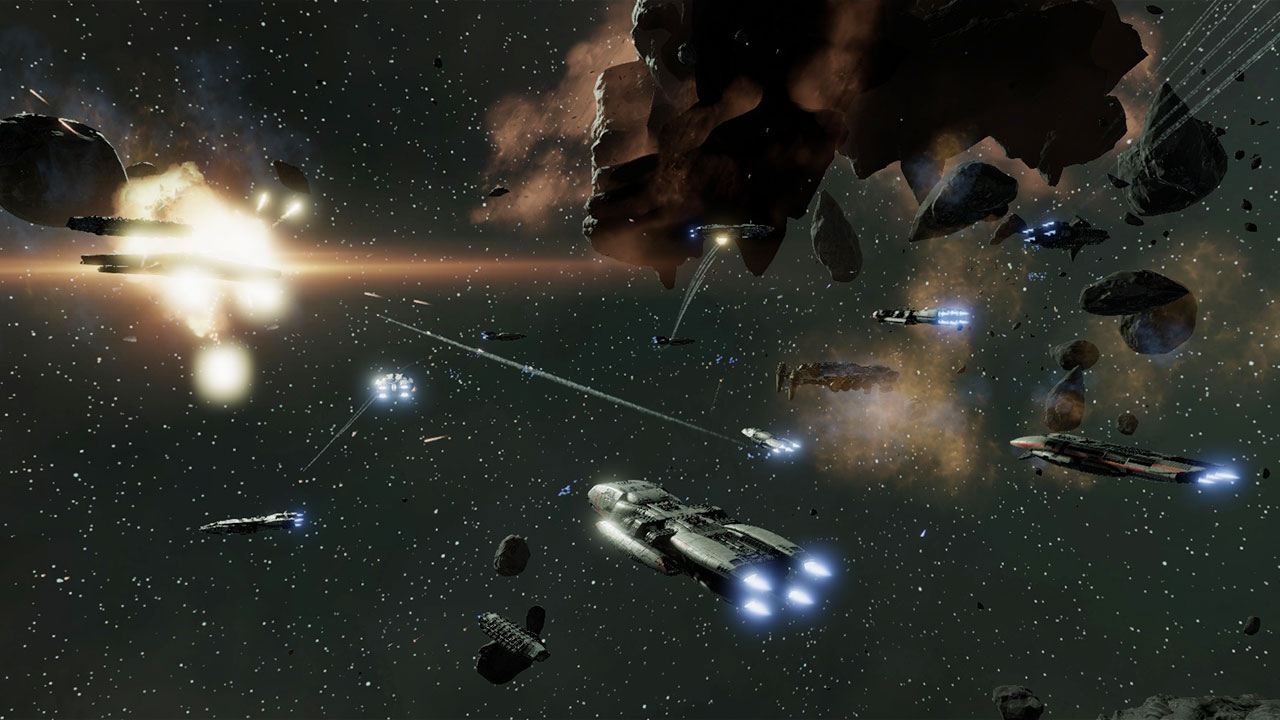 Progression rewards you with a number of elements from Tyllium, a resource used for building units and requisition points which can be used for recruiting officers for your fleet; as well as blueprints for new ship models. As well as the combat within the game, there’s also a political level of play, as you need to work towards keeping your fragile alliance together in order to accrue funds to keep your fleet at full strength. It’s by no means an easy task and, more often than not, can be frustrating in its gruelling difficulty level, but successful implementation of all of its mechanics and victorious battles really do reward you with an overwhelming sense of achievement as you battle against the odds.

With over fourteen missions that combine to tell the overall story, as well as a number of side missions and objectives, there’s plenty here to keep the game interesting over the long term. However, with its challenging level of difficulty, you can find yourself replaying failed missions until you get the strategy required just right. This can lead to some repetition within the gameplay, but overall, it still remains a fun game to play. Its only downside comes in the form of an abundance of menus and options that can be clunky at best, although this can be offset with full use of the Switch’s touch-screen capability. It can be difficult too, to work out the correct course for success, although the aim of your objectives is always clear.

Overall, Battlestar Galactica: Deadlock provides a true PC, strategy experience within the palms of your hand upon the Nintendo Switch. All of its functions require a strategic mind, but all of them work in an effective manner; allowing you to be a true armchair general in your quest for galactic domination against the Cylon Empire. It’s technical, it’s difficult, yet very rewarding to play and holds enough content to make this a worthy purchase for your gaming library. It looks fantastic, with some incredibly detailed ship models that will thrill fans of the series, as well as a sumptuous soundtrack and a cast of recognisable characters. It can be slightly frustrating in some of its mechanics and elements, but overall, if you’re a fan of the series, new or old, then there’s a lot here that will fulfil your ambitions of being the next Commander Adama or Lucinda Cain and if Muffit were here, he’d certainly wag his robotic tail in appreciation.

Battlestar Galactica: Deadlock is a challenging turn-based strategy game that will fulfil your aspirations of becoming the next Adama or Cain.