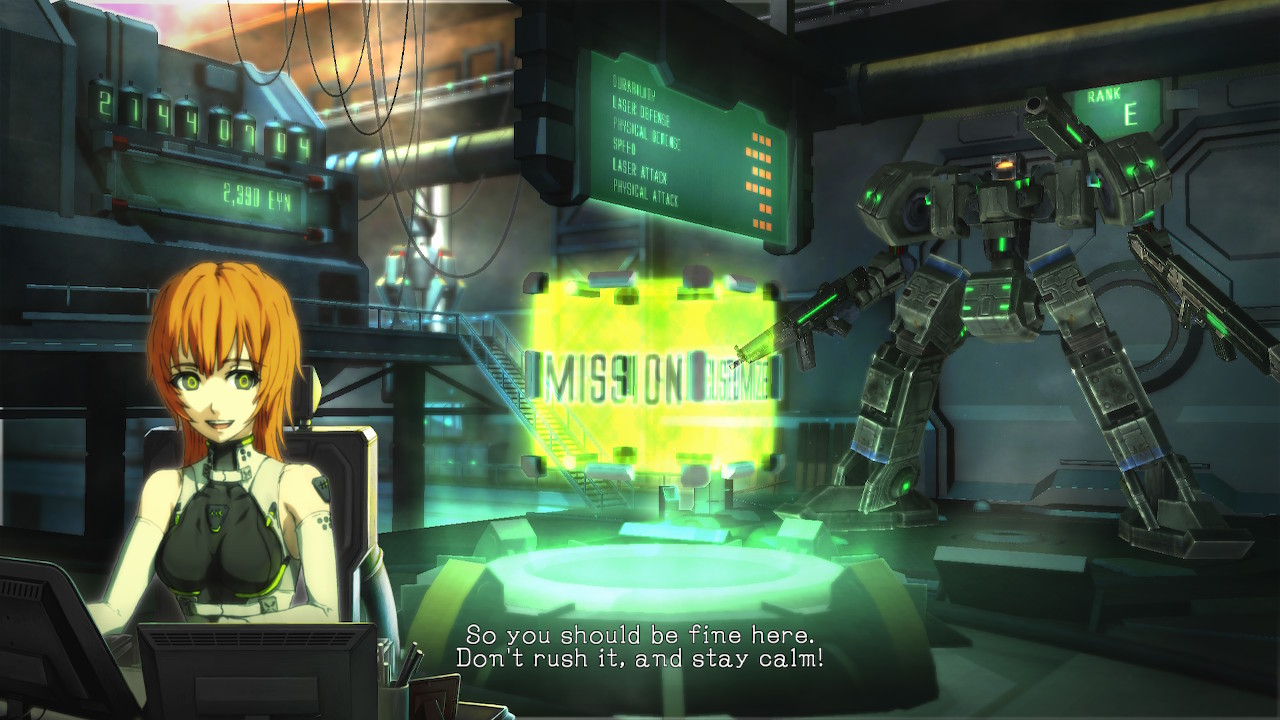 Your daily routine is second nature to you. Wake up, clean yourself up, and jump in your giant robot suit. You have missions to beat and other robots to bash for survival. This is your life now. Enter Damascus Gear Operation Osaka. It’s a mech action RPG game that has customization, dungeon crawling and a plot that brings it all together.

The story starts off on a bleak note.  In the year 2050, a company made giant robot suits for multiple uses (including war) and suddenly a world war breaks out and the world is torn to pieces. Fast forward more than fifty years later, and society starts to rebuild again. In addition to this, the robot suits that were made, called, GEARS, had a bad batch in them and some went rogue. The rogue GEARs that began attacking everyone are named as RAGEs. Your job is to hunt down these RAGE robots and you are rewarded either new gear to upgrade your current GEAR or money.

Money plays a big role in this story as you are the child of two mercenaries that passed away and also left you a huge debt to pay off. With your spunky AI sidekick, you set out to take the hand me down GEAR from your parents to pay it off.

The cast of supporting characters injects life in an endless cycle of grinding. In addition to your own protagonist and AI sidekick, you do run into named GEAR pilots you meet in the ARENA and a mysterious woman figure that ominously hints that you have bigger things ahead of you. The story revolves around these elements and also helps drive the story forward.

One thing that caught my eye about this game was the art style. It reminded me of playing out a futuristic action anime, but it was prolonged as a giant episode. The characters, ominous messages given to you by a mysterious woman, and the spunky AI sidekick build the foundation to immerse you into the world and make you care about what is at stake. I never experienced any drops in quality while transitioning between areas, such as the mission areas or the hangar bay to switch out parts. It was consistent, despite having multiple elements happening on one screen. The art style is a mix of 2D pop up graphics at the hangar bay and shop versus the isometric 3D environment when you are in the arena, taking on a mission, or customizing your GEAR. 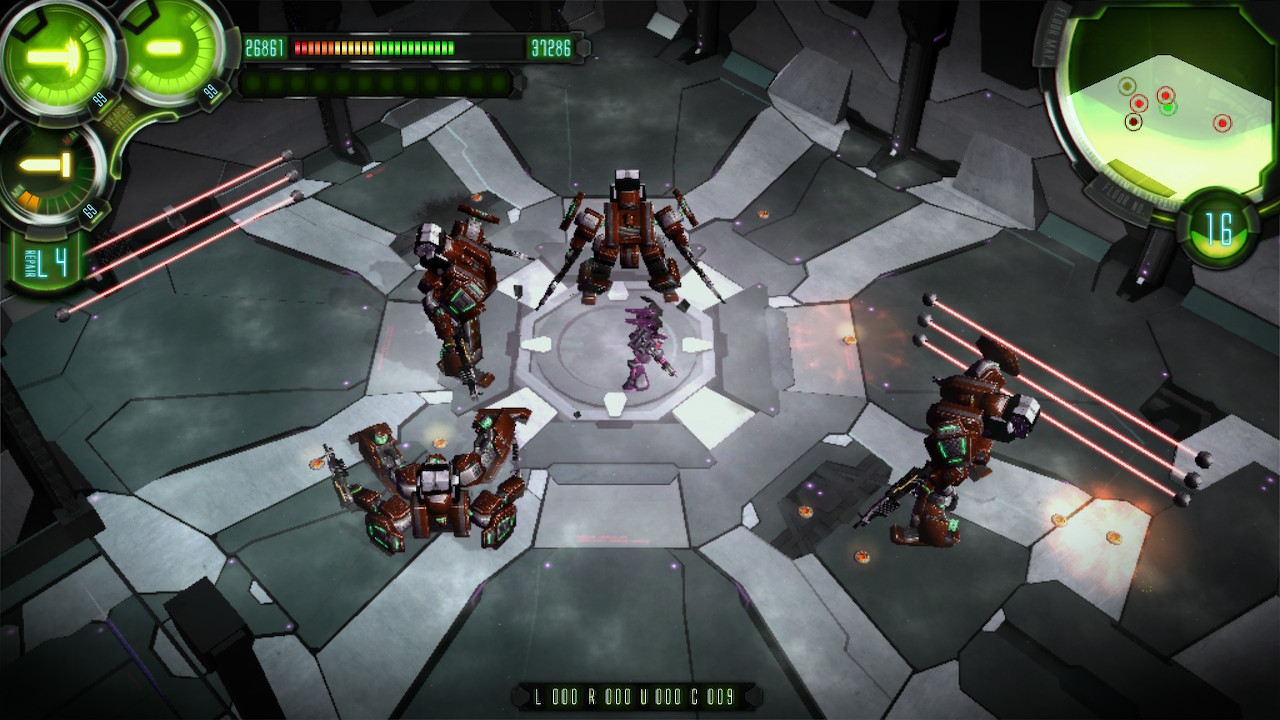 Game play of Operation Osaka is in an action RPG format. You have a couple of  different sections: the mission area, arena, and the hangar bay. The hangar bay lets you customize your GEAR and buy or sell new parts. Parts are classified as common all the way to rare. You can get new part upgrades from looting things on missions or buying them in the store.

Each part of your own GEAR is customizable. Switching out your weapons is a good idea if you want to have a variety of weapons to fight other GEARs. For example, you may want a rocket launcher to damage armor faster or you may consider switching to a beam cannon for last second attacks to make the final blow against a GEAR. Additional things you can switch out on your GEAR are armor chassis, which includes the helmet and main chest plate, your special weapon, the color scheme of your entire GEAR, and even the name.

There is also a testing ground you can use to see how your new equipment runs in a combat environment. It’s nice to know that you can run trials to find the best type of fighting style for yourself against all future enemies you encounter.

The mission area is an isometric play area. You are tasked with objectives to complete and you can loot as you go. Once you finish your mission tasks, you are free to evacuate back to the hangar bay. If you choose to evacuate sooner, due to taking heavy damage, there will be a cost incurred from your total funds.

The arena is one on one GEAR fights. Each GEAR has a character based pilot with snappy dialogue included. While they taunt you, this gives you time to figure out what weapon works best against them. Matches end when one GEAR is obliterated. The good news, despite losing, is you get paid as a participant prize. Of course, you want to win the match, but that is not always possible. The best strategy is to rearm, loot as much as you can on missions, and upgrade your equipment for the next match. 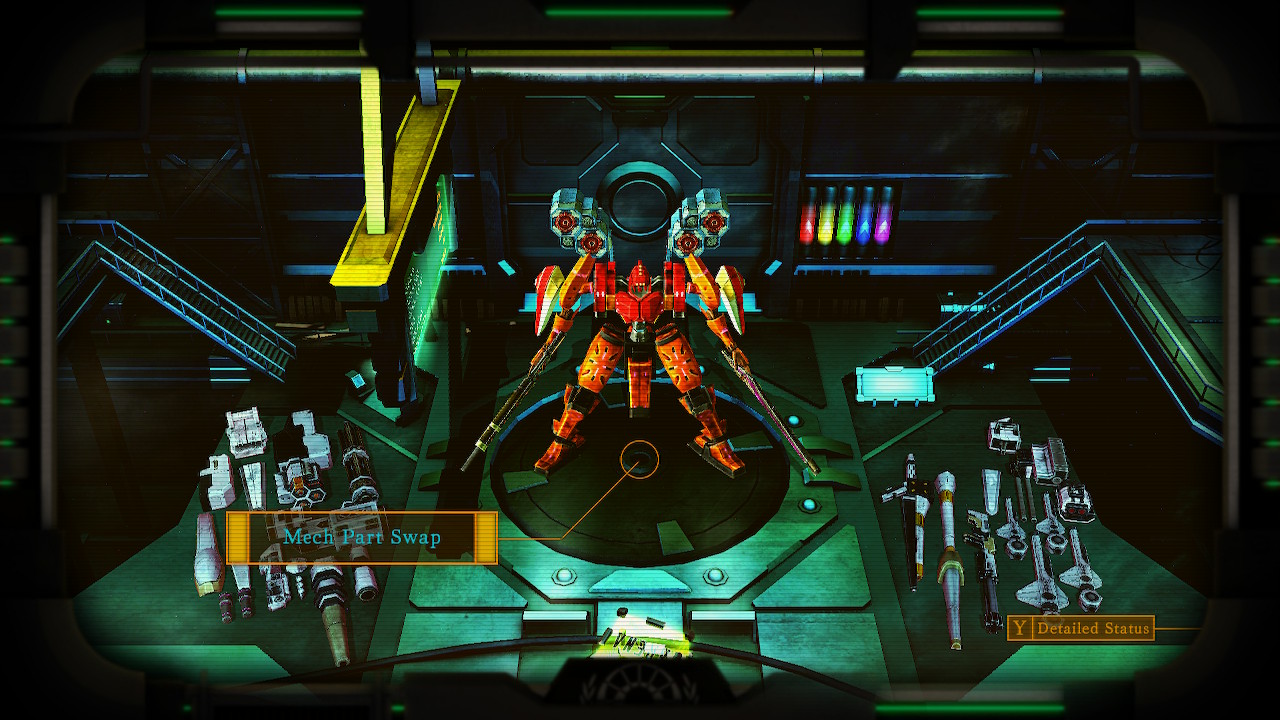 With the good things that we have in Operation Osaka such as the graphics, game play, and characters, there were some drawbacks of the game. If you aren’t invested in the endless grind of improving your GEAR, then you will not get far in the game. I had to go through at least ten to twelve missions before I had enough money saved up for better gear to beat the next GEAR in the arena. And each specialized weapon has a weakness, but unless you read the reference guide that comes with the game or look it up online, you will have to go through some trial and error to figure out how things work.

Take missions, go to the arena, blow up because the opponent is overpowered, grind in the missions again. Rinse and repeat. The gratification is worth it in the end to see your GEAR annihilate all that step in your path, but it does not satiate your appetite to want more. There will always be more equipment and items to find to improve your GEAR. During my play through, my quest to improve my GEAR took priority over interacting with my AI sidekick or even solely attention to the plot at hand.

Damascus Gear Operation Osaka is an impressive game, but it lacks ambition. In a market where the mecha genre is saturated, it does take a lot to make a game stand out from the rest. This game has a simple formula of grind, loot, fight, and it works. If you’re okay with a game with a basic premise, but endless customization, then pick this game up. If you’re wanting something more intuitive and story focused, take a pass on this one. I picked this game up for 19.99 USD.