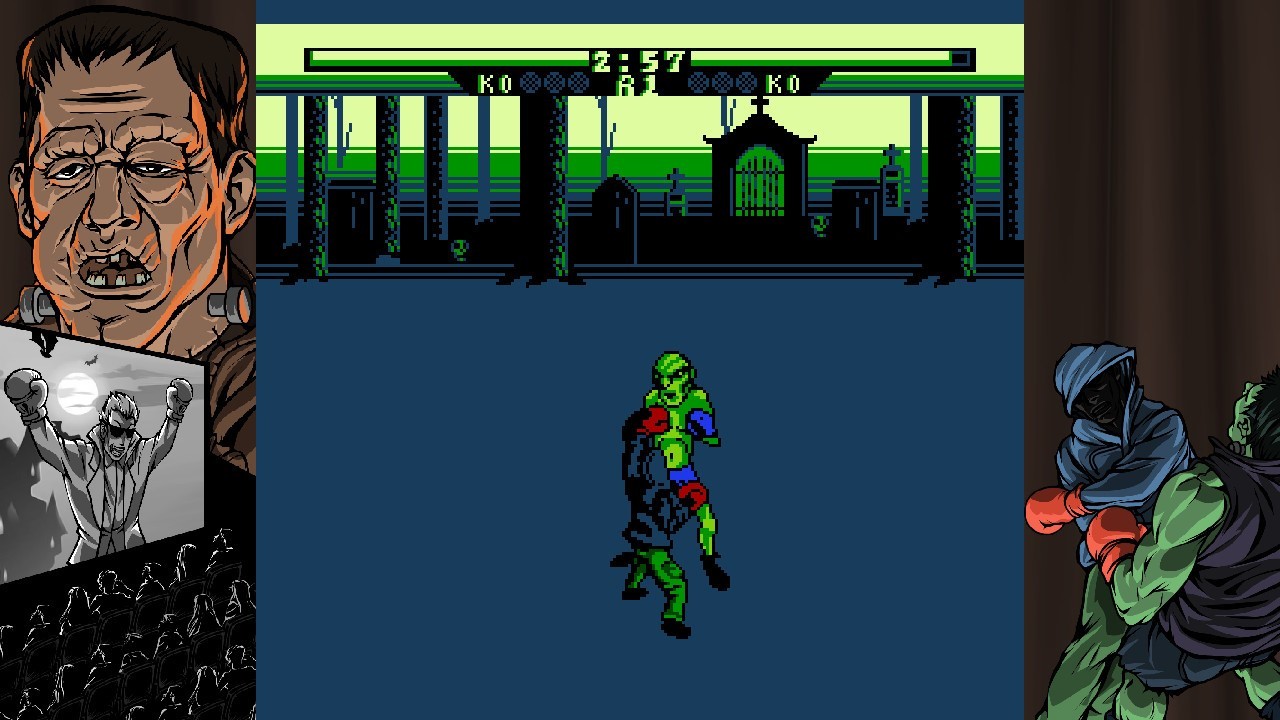 It takes a lot to try and put an original spin on a classic gaming element. Nothing is more nostalgic to the current gaming generation than the 8 and 16 bit throwback titles, and emulating them is fun but rarely gives you the same satisfaction as before. Face it, those games were most fun because you were younger and they were new. We’re already having people wax nostalgic about Final Fantasy VII, and it’s only a matter of time before we start talking about The Last of Us like it’s a golden oldie. So we retrofit modern titles and try to make something new with old ideas, which is why we get pixel art and chiptune games with digital footprints that would accommodate the original Mario Brothers 1000 times over. Mega Cat Studios does a magnificent job of catering to those who love the old school idea, hate to save money and desperately believe in recapturing the feeling of youth. Besides publishing actual cartridges that work in your original SNES, NES and Genesis systems, they distribute a fair number of games digitally that best show what artists today would have made if they were in the industry 25+ years ago. Just in time for Halloween, we’re now privy to Creepy Brawlers, which does so much in terms of presentation, but falls unsurprisingly short in execution.

The setup for Creepy Brawlers is great. Putting you in a sort of classic horror movie motif, you play an unnamed boxer who is mysteriously getting drawn into fights with the movie monsters of yesteryear, including the Swamp Thing, Dracula, and the Wolf Man. You don’t seem to understand that the monsters are actually THE monsters, and so you think you’re picking fights with random, ugly people who want to do you bodily harm. It’s a fight to the literal finish, as the only way out of the ring is a KO or a TKO. Funnily enough, if it comes down to the decision of the referee (who is a disembodied hand), the fighter is going to lose every single time and, spoiler, you’re gonna die. So wrap up your hands, practice your shucks and jives and get ready, because tonight the greatest hits are against the jaws, torsos and fangs of some real freaks! 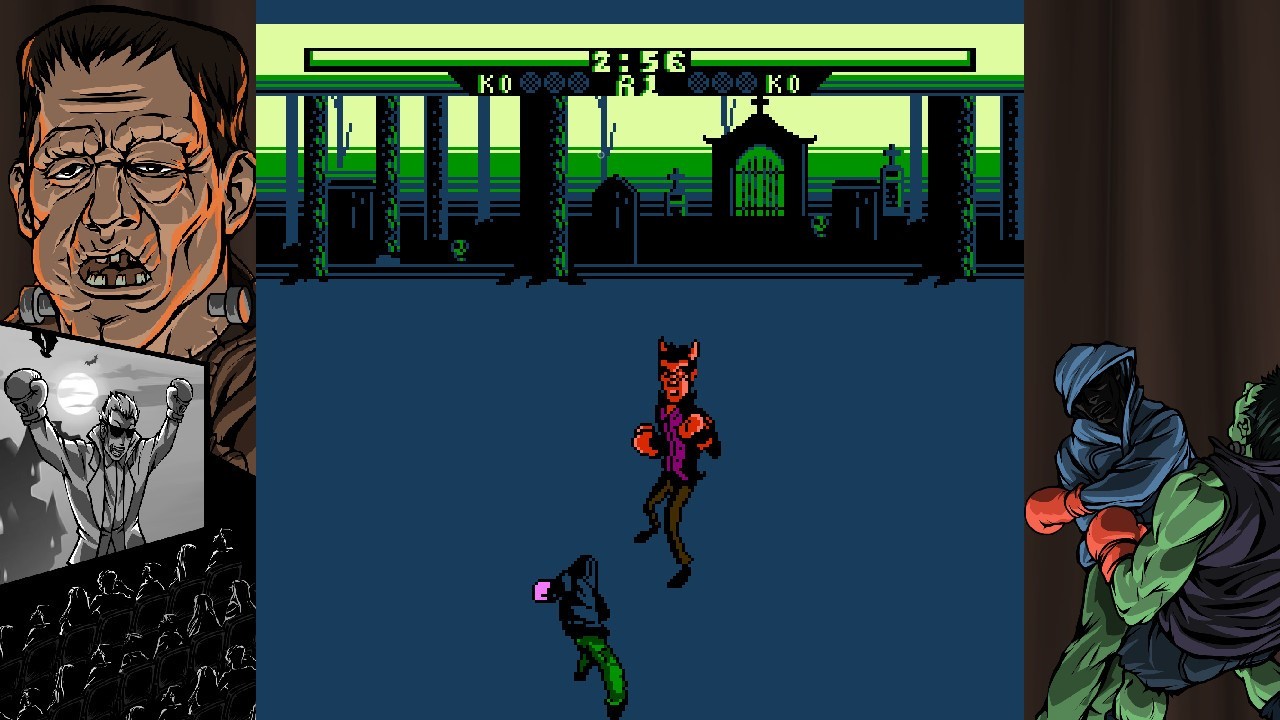 Creepy Brawlers does its best to recapture the magic of the original Punch-Out in both delivery and style. Your punches are limited to left and right jabs, with the addition of the up arrow to deliver uppercuts. You gotta block and dodge incoming hits or you’ll be flattened, because these monolithic monstrosities have a bit of power behind them. Thankfully, there is a little bit of a silver lining: if you dodge a couple of attacks in a row, you can activate a super punch (indicated by your glowing gloves) and show those ghouls a real what for in a smashing manner. It’s entirely possible to get the drop on the enemy and ruin their entire day with a full on KO, but it’s rare, much like the original Punch-Out. Just have golden gloves and fleet feet and victory can be yours!

A lot is done right in the world of Creepy Brawlers, and it starts from the full on NES presentation that rings true and full throughout. A lot of the time, these retro inspired titles still manage to sneak in a few extra colors that go beyond what 8-bit truly meant, or have a certain degree of control and agility that you simply were not able to accomplish back in the day. Creepy Brawlers, having been made with a real 1:1 idea in mind, is pitch perfect for a grey rectangle that I would have jammed into my system back in the early 90s, and it’s not just the mere color palette that makes the environment work (though it certainly helps). The graphical design is exactly what you’d imagine from someone in a studio trying to recreate Boris Karloff level monsters with only eight bits to work with, and the effect is admirable, even awesome. When you see the brown, angular visage of the Wolfman coming at you with snarls and fangs, it’s evident that the extra effort was put in to make something visible in both the working space and the dead space. When Dracula changes from a bat into his full Count persona, the transition is far from smooth, but rather janky and with limited frames, just like you’d imagine back in the day.

Additionally, the soundtrack feels more honest than most of the chip tunes that I’ve heard in recent memory. Usually, chiptune soundtracks incorporate a ton of great advancements in both physical and digital means that give a robust, full orchestra of monotone machines, allowing people to essentially cheat their way to mimicking the sound. It’s grand, but let’s be real, it’s not what the people at Hudson Soft or Tecmo Sports were able to work with while the Berlin Wall was falling down. But the devs who got behind the Mega Cat Studio publication were genuine in recreating sounds that work with the NES (remember, you can actually purchase this game, as a cart, in the current decade) and so the feeling is significantly more authentic and cool. The end result is that you might feel disappointed at times because, well, it does tend to be a little flat and tinny, which is what a lot of the soundtracks honestly sounded like. But then you get moments of really cool sound shaping, where there’s a distinct discord or dissonance that strikes you in a monstrous way. When it lands on the ear like that, you have a real frisson of uneasiness, and it made playing with headphones both a bonus and a must for the overall game. 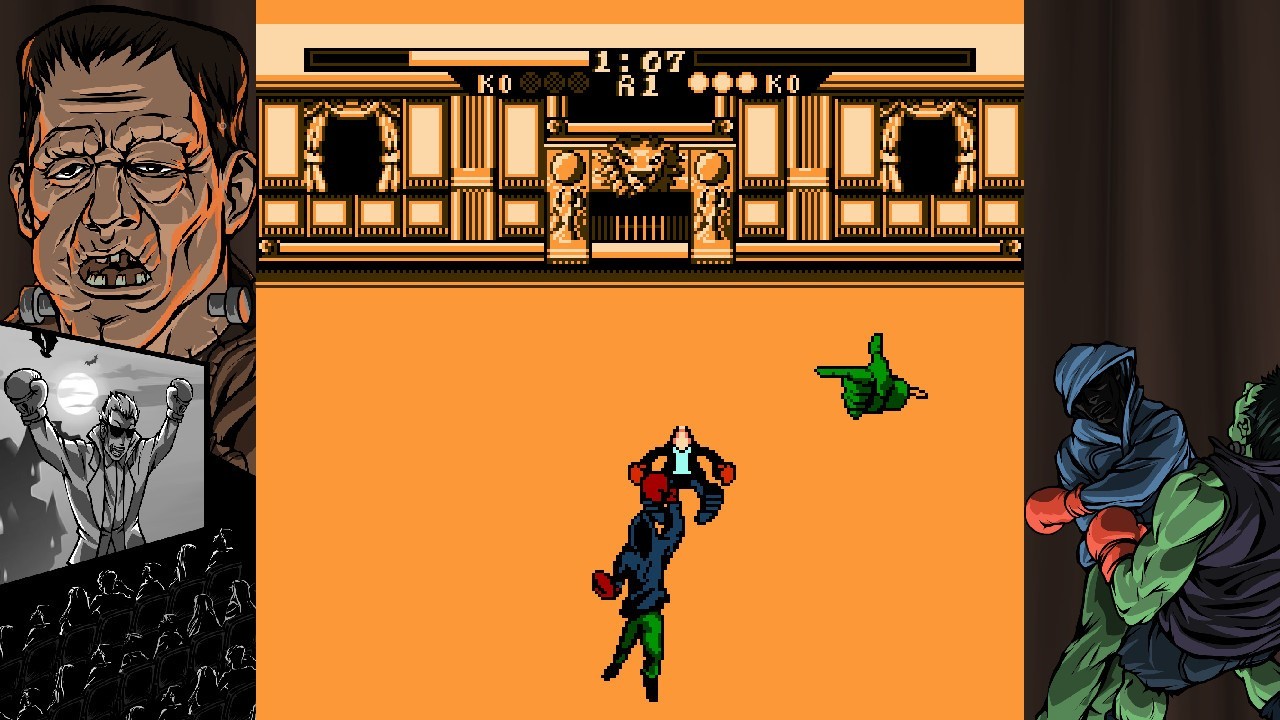 Unfortunately, it’s the gameplay itself that tends to hamstring Creepy Brawlers. I think we all like to romanticize the NES because of what it meant, and not what it actually did. Punch-Out was great, but Super Punch-Out was even better because it added complexity, better reaction controls and a sense of personality to the fights that we had superimposed on the original (with or without Mike Tyson). The banter between matches that sets up why our hero is fighting monsters (and the monsters’ responses) is quite good, and it crafts the scenario well. Then you get into the arena and it all just kind of falls to bits. You don’t have to worry about stamina or things like that, so you just throw punches as fast as you can, regardless of getting blocked. When you see the monster start to wind up for their hit, you can usually guess which way they’re going to go, even if it’s your first time encountering them. You can block and dodge for whatever, as long as you’re still standing afterwards, and then deliver a flurry of counterpunches until the sequence begins anew. Sure, the “hits” are pretty interesting (how can I cope with someone swinging a knife at me???), but the frustration of game limitations quickly chips away at the interest. The return volley of hits from the enemy is never so fast that it’s unfair, but it’s so erratic in quantity that you can activate your “super punch” and never get to use it because you will miss and get punched in the face for your trouble. As a result, the “super punch” only works every other time, and so you’re just left to body blows and quick jaw hits until one of you gets bored and the fight is over. Hint: the AI has nothing better to do, so it’ll probably be you first.

Though I enjoyed things like the campy presentation, the achievement system (local only, naturally) and the very affordable price tag, there’s something missing in Creepy Brawlers that keeps me from really becoming enthralled or even long-term entertained with the game. The retro presentation and aesthetic is so damn spot on that I almost wish I had sprung for a cart version because it might change my perspective. Still, there’s no denying that it’s loyal to two ideas: old school gaming and punching the Wolfman. If you would also like to punch the Wolfman and have a five spot sitting around, Creepy Brawlers could be a frightfully fun evening with fellow old school players this Halloween.

While stunning in authentic retro design and sound, Creepy Brawlers suffers from being TOO accurate and bogging down gameplay with archaic limitations.