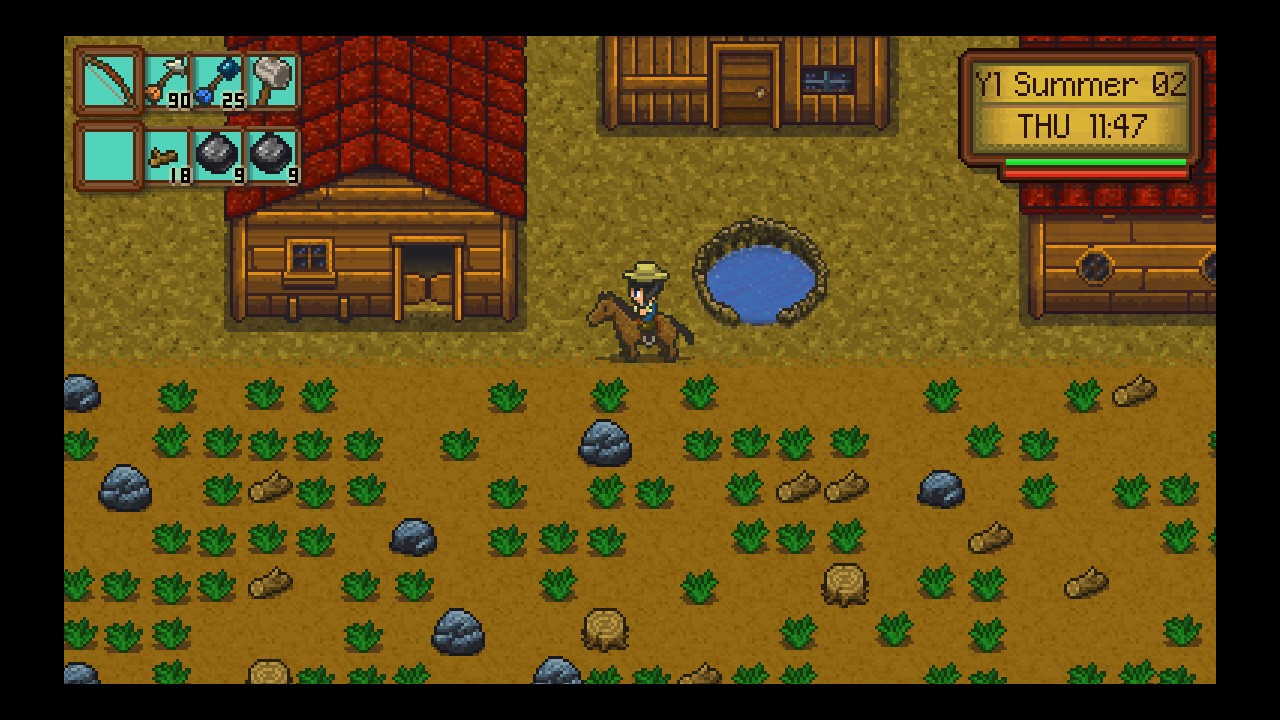 On paper, an ode to the classics always sounds good. As someone who played Harvest Moon 64 at a young age, I was immediately intrigued by the look and description of Gleaner Heights. Over ten hours later, I find myself wishing I hadn’t fallen prey to nostalgia’s snare because no matter how good something sounds on paper, that means nothing if the delivery is flawed.

Upon starting up Gleaner Heights, you’re prompted to create your character. There’s a handful of hairstyles to choose from, but ultimately your decisions will boil down to colours–skin, pants, shirt, shoes, etc–and what gender you’re interested in pursuing romantically. I thought that was a nice touch, though it’s a little annoying to have to be locked by that initial decision especially if you, like me, marry based on personality. None of the tiny pixel characters have portraits anyway, so any visual appeal of a would-be spouse is lost.

True to the genre, you are given a farm for one reason or another. It’s up to you to work the overgrown fields and turn them into profitable ones–which is where you’ll spend most of your free time. You also have the option to fight dangerous wildlife, befriend the townies, hook some big ones, or brave the depths of the mines. Pretty standard stuff. 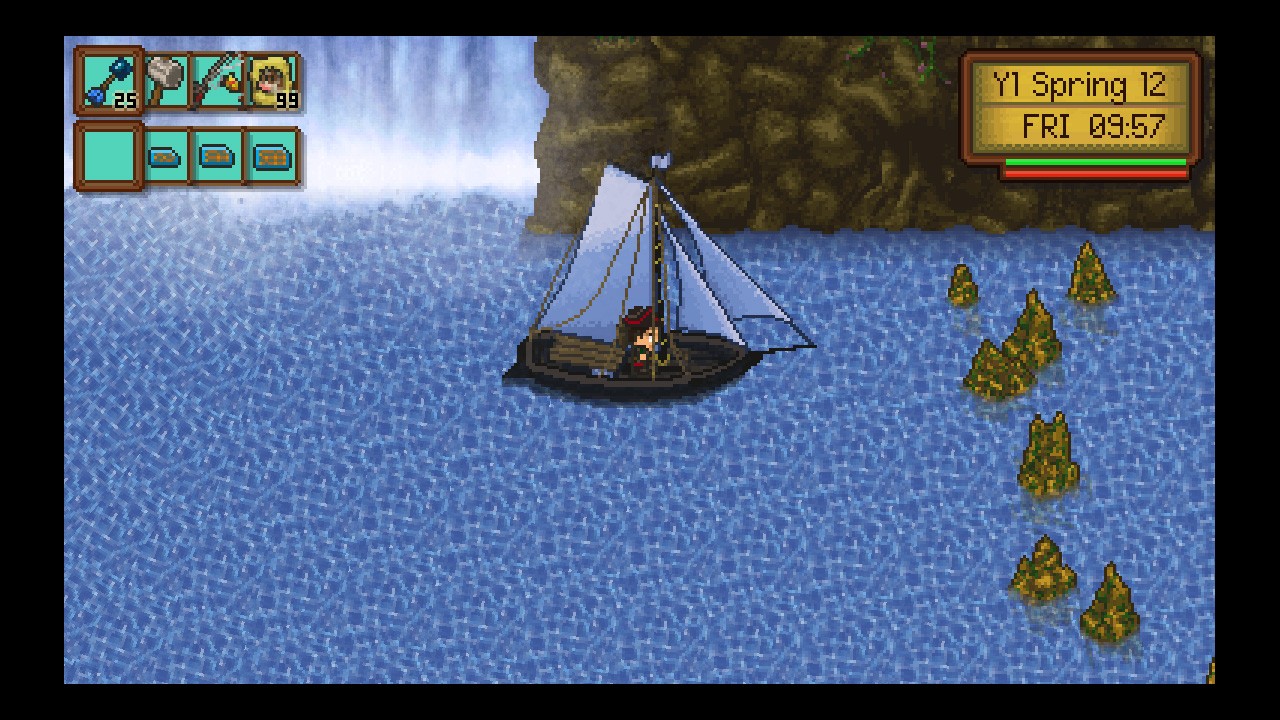 Seeds in Gleaner Heights are for a single tilled tile. I liked that you could turn the grid assist–which us exactly what it sounds like–on and off as you see fit. After tilling land and planting seeds, you water them using a watering can. Again, simple stuff. You don’t have to water on days when it rains, though if you’ve planted fresh seeds the day before, they can be washed away so take care to keep an eye on the weather. Eventually, you’ll be able to add livestock to the mix and they require feeding and brushing and provide goods like milk and wool. Every action drains stamina, which can be recovered by eating foodstuffs, but there’s no real penalty to becoming exhausted other than waking up half an hour later the next day and with half your total stamina. Which begs the question: why even have a stamina bar in the first place? In most games, the natural order of things is to drain the stamina bar and then either a. Pass out and wake up in a clinic or b. Start losing health. There’s neither consequence in Gleaner Heights, meaning you can do whatever grindy, mindless task you want with the day.

Meander into town and you’ll be able to meet the Gleaner Heights cast. They’ll walk around, spew out one of three dialogue options, and will generally be disinteresting. Their lack of charm makes it difficult to be invested in what goes on in town and I found myself acting like a hermit most days, sticking to the company of the admittedly cute chickens and tending my growing garden. You can get married if you woo a potential candidate, but that process, too, is uninteresting. After only a few gifts found out in the wild, I managed to get close to Mei. There are milestone heart events, but otherwise her dialogue didn’t change much if at all.

Combat, though infrequent, is also lackluster. There’s a lack of weaponry, save a bow you acquire far too late, meaning you use your farming tools. The rusty ones you start with drain stamina very quickly, but worse still the hitboxes are wonky, making it difficult to hit normal foes and nearly impossible to hit flying foes. 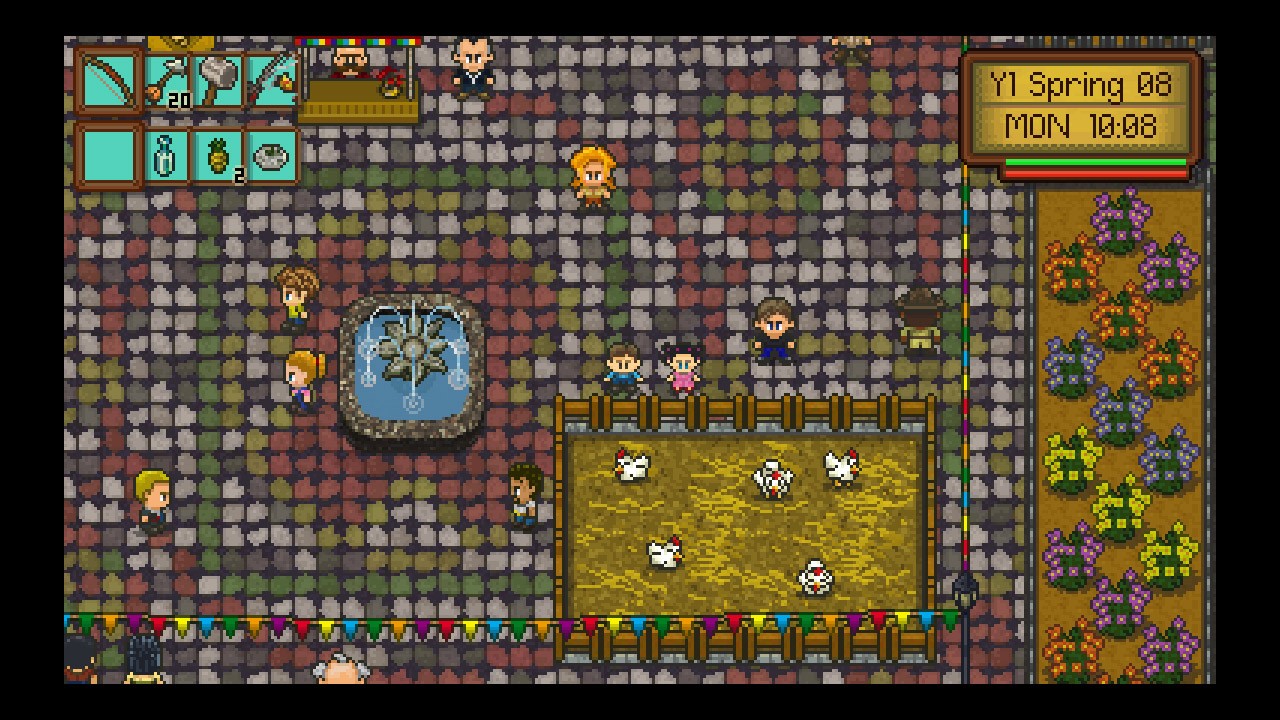 Gleaner Heights’s biggest problem is its pacing.  The lack of consequences regarding stamina I mentioned earlier makes it so that you can continuously do actions like mining so long as you have health, but do you really want to? Not only is it a tedious process, the rewards are few and far in between. One trip to the mines for enough copper to upgrade my tools in the blacksmith–the first level of which costs 5000 (that’s five THOUSAND) coins–took me over an hour at mining level 3. Spoiler alert: I gave up long before getting enough copper, fed up by the monotony and the apparently broken RNG. There’s only so much you can do on the farm and, since the other three facets of Gleaner Heights are utterly uninspired, I see no reason to bother powering through it.

Gleaner Heights promises a dark and twisted storyline, but you’ll have to be pretty twisted yourself to be able to make it far enough to even see that first hint of intrigue. If you’re able, more power to you. The retro inspirations were taken too seriously and could have done with a greater dose of the modernity that made games like Stardew Valley, an inescapable comparison point, fantastic.

Gleaner Heights is a good idea, at least on paper, but the execution leaves much to be desired. It delivers classic farming sim gameplay, like it sets out to do, but fails to make improvements on aspects of the genre that have been known to drag down the experience. As a result, Gleaner Heights is less a nod to titles of old and more a comparison point to how far the genre has come. If you’re looking for a classic farming sim experience, you might as well download Harvest Moon 64 on an emulator. It’s got more charm and will better hold your attention in addition to saving you the 9.99 asking price.

The darkest, most disturbing part of Gleaner Heights is the sheer amount of time that must be invested before it becomes anything resembling entertaining.