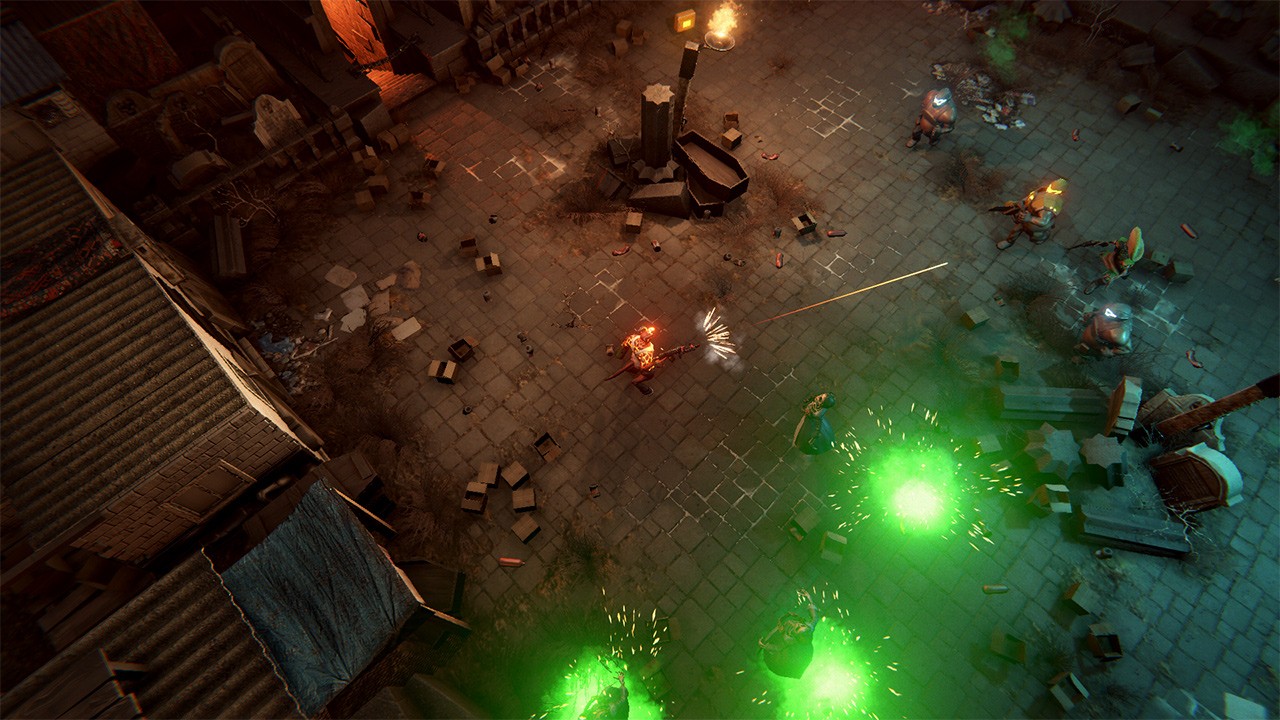 The variety of genres within video gaming can often satisfy those little itches we all get from time to time. Fancy playing something with an expansive journey or epic story-telling, then indulge within the fantasies of role-playing. Want to fly by the seat-of-your-pants, then engage in aerial combat with a good old flight simulator or want to test your mettle, then why not partake in finding the solution to a puzzle game. Whatever your tastes or time-of-the-moment fancy, you can be sure to find a title that will provide whatever it is you’re looking for. Sometimes though, it’s just good to have pure, mindless fun that doesn’t require anything else apart from indulging  in some good, old-fashioned blasting and mayhem. If that’s you, then Big Way Games will certainly have you covered with their latest release, BDSM: Big Drunk Satanic Massacre as it shoots a release onto the Nintendo Switch.

Before you ask, the title doesn’t contain any resemblances to a digital version of Fifty Shades of Grey. There’s no leather, chains or whips here, well there is, sort of, but not in the way that you might be immediately thinking of. Instead, this game follows the exploits of Lou, the devil’s son, who likes nothing better than swigging on copious amounts of alcohol and milk, off-loading a few rounds from his weapon collection and generally behaving in a very bawdy, foul-mouthed way of colourful metaphors and innuendos. He is tasked with regaining back control of hell, which has been possessed by the living and unleashing a hell’s fury of bullet-hell from a selection of guns, special abilities and a good old glass of milk. 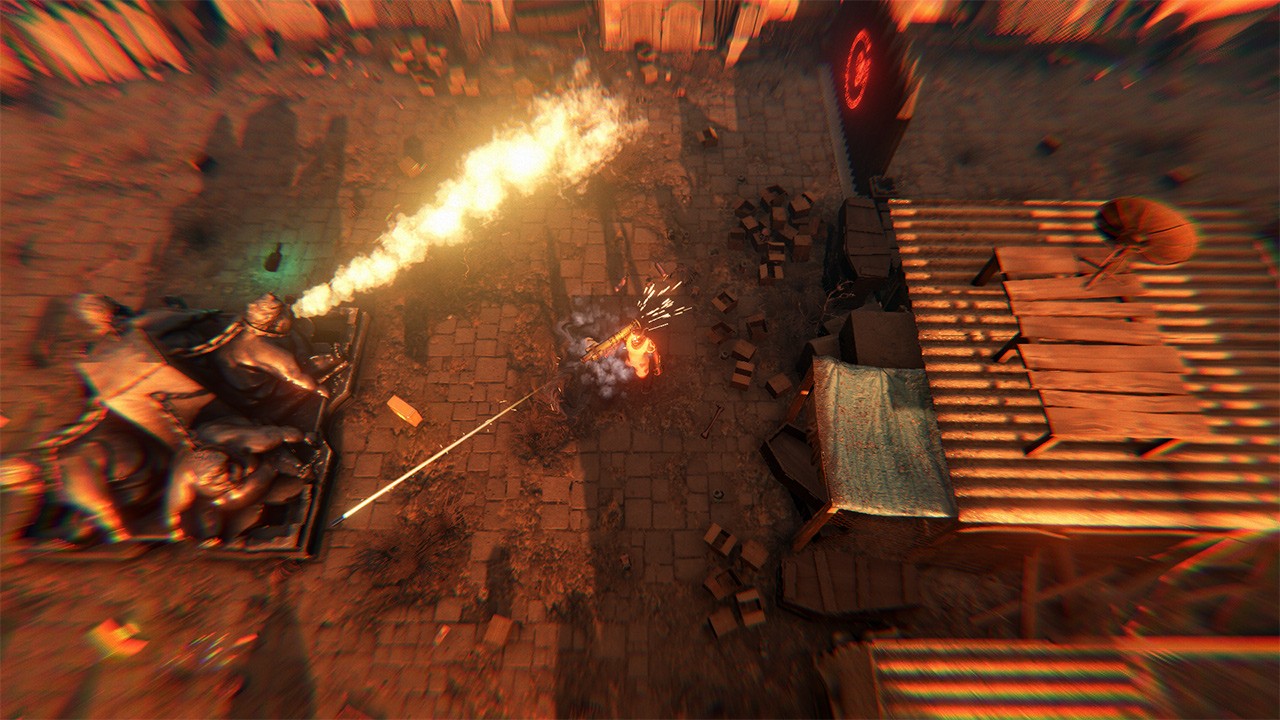 As you may have guessed by now, this is a game that has its tongue firmly within its cheek. However, this is also a game that has a very strong adult content and simply isn’t for the weak-hearted or easily offended; making this a game that isn’t really suitable for a younger audience. The game takes place over four chapters that presents you with various locations within the depths of the underworld. Armed to the teeth with a variety of weaponry, from revolvers to shotguns and machine guns to rocket launchers, you traverse the corridors of your homeland, taking out waves of mankind in order to regain control of your father’s kingdom. As well as this, you also need to drink milk when you can, collect the red orbs from fallen enemies, fight a series of bosses and free a series of captured Nymphs who have been caged.

The game plays from a top-down, isometric view with a twin-stick control that functions for both movement and aiming. In the grand scheme of things, the game plays in a fairly standard and generic setting, at least in terms of its genre. However, each of your weapons contain a secondary fire option, triggered with the R button, that can empty an entire magazine in one go or launch grenades to inflict mass destruction. To add to this, you can collect red orbs from downed enemies which fills a rage meter. Once full, you can then activate a special ability that projects a powerful beam of hell-fire and makes you invincible for a short time; a life-saving function when you find yourself outnumbered or cornered in a particular dire situation.

This is easier than anticipated with the huge amount of enemies that you need to dispose of, plus their ability to soak up a mass of bullets before dropping to their knees. However, to help further, each of the levels contain a variety of vending machines that dispense milk for Lou to drink, these in turn act as a health regen, allowing you to refill your health bar back to its max. Each of the game’s locations are just as wacky and bizarre as the gameplay itself, taking in the sights of the Big Wac restaurant and factory to a more surreal setting that depicts the sleazier side of Satan’s home. Speaking of sleaze, the game contains a lot of sexual content that some people may find offensive. 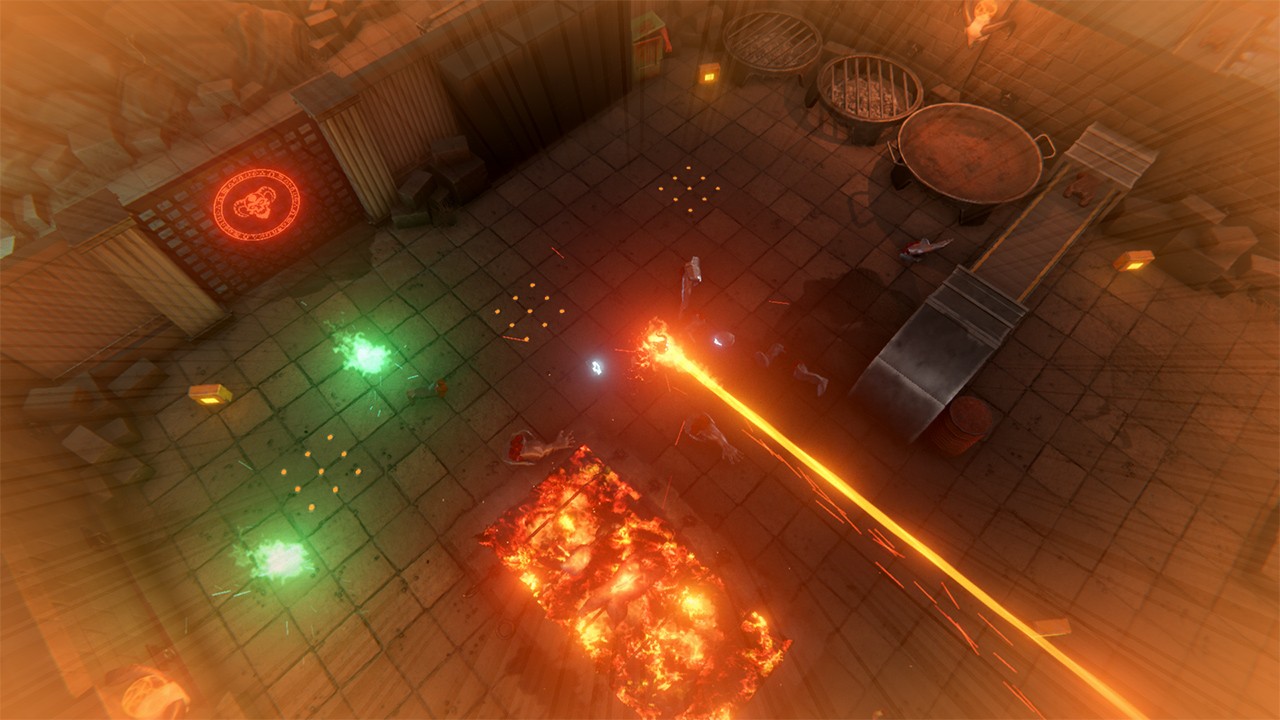 As far as technical performance goes, this isn’t the best looking or best performing game within its genre. Despite a variety of level settings, the design of them can feel a bit flat and lacklustre, something which isn’t helped with a frame-rate that can chug at certain points within the game. It contains a distinct last-gen feel, but overall, it wasn’t really something that bothered me that much and never really detracted from the gameplay. However, I can appreciate that this may be an issue to some. Unfortunately, the audio qualities also come with a number of issues, such as audio effects and soundtracks overriding each other into an indistinguishable mess. Again though, this was never an issue that took away the unadulterated fun of bullet mayhem that ensued.

Overall, BDSM: Big Drunk Satanic Massacre can be a fun game if your into mindless violence, sexual innuendo and bad language; which was probably why I enjoyed playing it. In fact, without these elements, this would be a very generic title and wouldn’t really hold anything of value or bring anything new to its genre. There is some fun to be had with this game, but I do feel that it would only appeal to a niche audience; and only one that can see past its nuances of poor graphics, bland designs, frame-rate issues and broken audio. It actually sounds like I’m trying to put the game down, but the actual fact of it is, I really enjoyed its mindless massacres and bawdy content. In order to get the most out of it, you need to play it with your tongue-in-cheek and finger firmly pressed on the trigger. At the end of the day, this is a game that will split the community. You’ll either love it or you’ll find it very offensive, but play it with an open mind and it’ll make you feel like a bat out of hell.